Our deluxe, limited edition Platinum Edition wedding gowns are truly special. Each limited run of designs incorporates all of your favourite elements from each of our collections but with more inspired details, more refined silhouettes and even more opulent fabrics and embellishments. Each of these unique wedding gowns also features its own handwritten, numbered label, revealing they’re one of just a small number of exclusive designs.

Below we thought we’d share with you some of the brides who’ve been lucky enough to walk down the aisle in one of our exclusive Platinum Edition wedding gowns. There’s fine lace, extravagant trains and some serious sparkle, so enjoy! 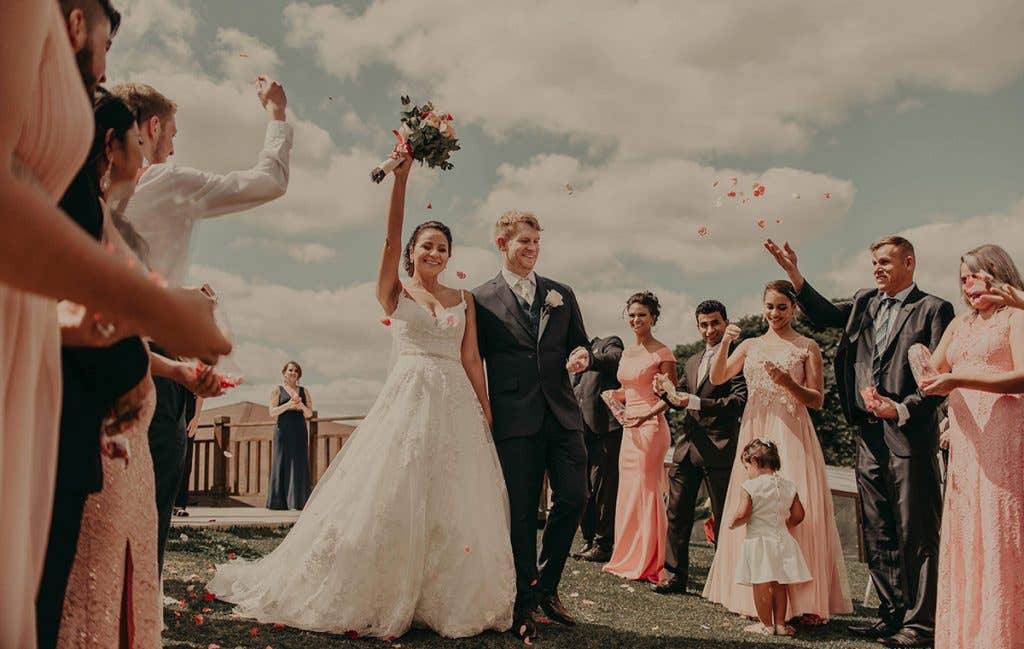 After first meeting in London, a romantic Lapland proposal sealed the deal for Jessica and Sean. “We were on holiday in Lapland and we went for the traditional picture with Santa,” says Jessica. “Santa said he knew me and that he had a gift for me. He gave me a big box and inside were smaller and smaller boxes until I got to a super small one. Sean said he would open it for me and then he proposed. It was beautiful!” 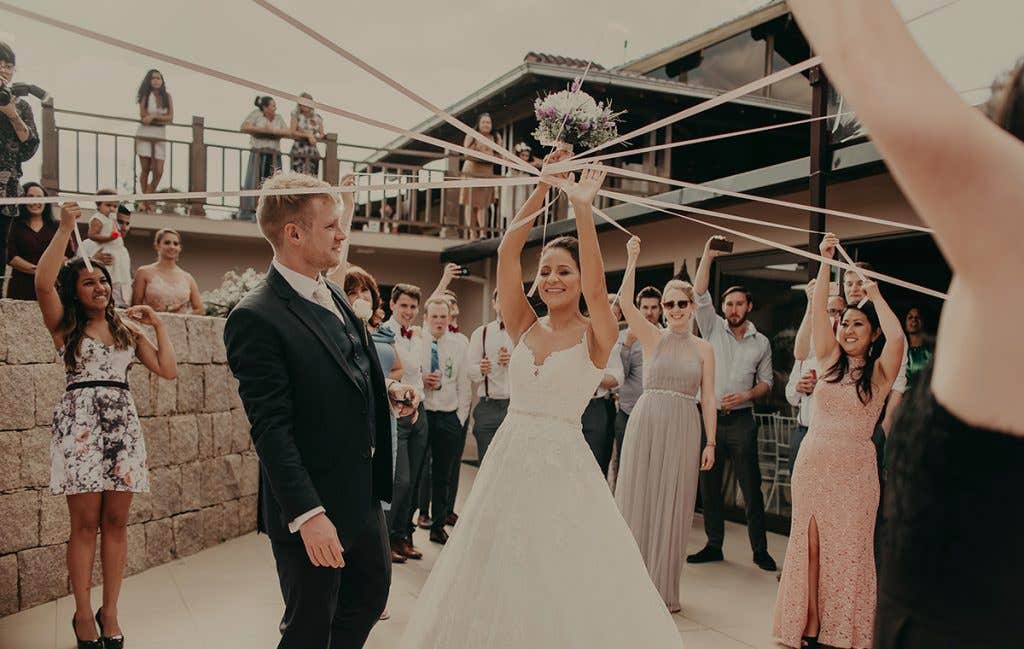 A dress to impress

Jessica is Brazilian but was living in London. “I had no one from my family to help me, so my future Mother-in-Law was my shopping companion,” says Jessica. “We travelled to Bristol, where she lives, and spent the day looking at wedding gowns. We arrived at WED2B and I bought my whole outfit within two hours! My dress was the Platinum Edition Britney by Viva Bride. I liked it so much that I picked it in two different colours by accident. I loved the lace and the shape of it, which wasn’t super big but still a princess gown. It’s also respectfully sexy, as it shows off the curves without showing too much skin. Of all the wedding gowns I tried on, it was the only one that made me feel like a bride.” 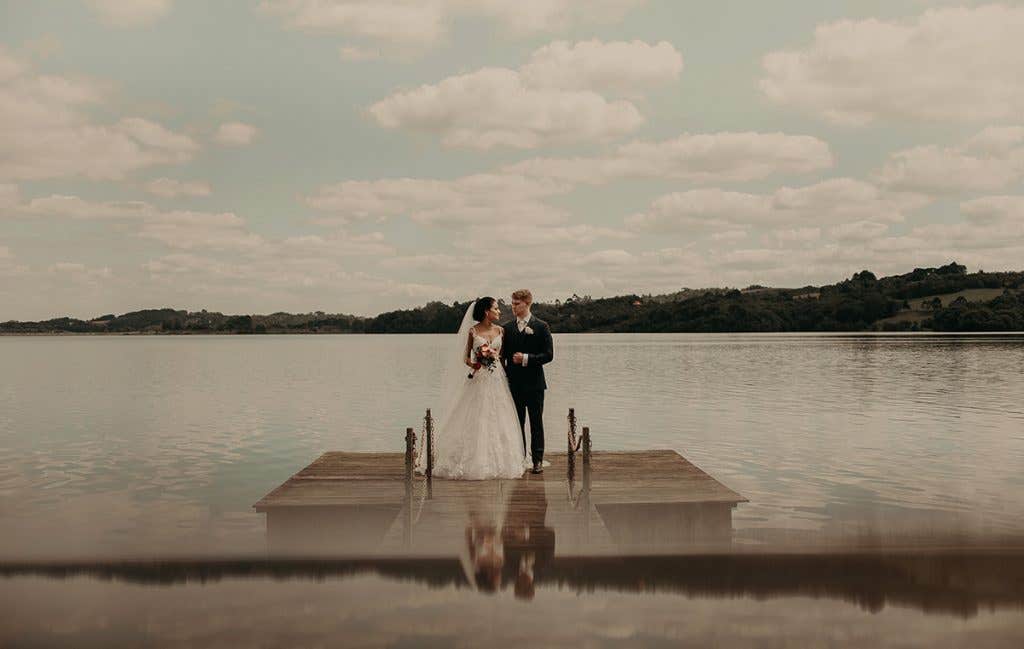 The couple married at a small lakeside country house in Brazil, surrounded by greenery. Jessica’s Uncle conducted the wedding ceremony and her Dad walked her down the aisle. “My favourite memory was seeing Sean trying not to cry when he first saw me and hearing the vows he wrote himself,” she says. Afterwards there was a boho chic reception with an amazing table of sweets with hundreds of little chocolates (a Brazilian tradition). There was also a choreographed romantic first dance that switched to the Spice Girls and Gucci Gang half way through to surprise guests!

After meeting in their teens, Charlotte and Shaun got engaged during a holiday in Lanzarote in June 2013. “I was 20 weeks pregnant with our son Joshua,” says Charlotte. “Shaun had been guarding the safety deposit box since we arrived and wouldn’t let me go in it, so I had an idea something was up! I was still shocked when it happened though. He took me on a walk one night along the seafront and proposed.” 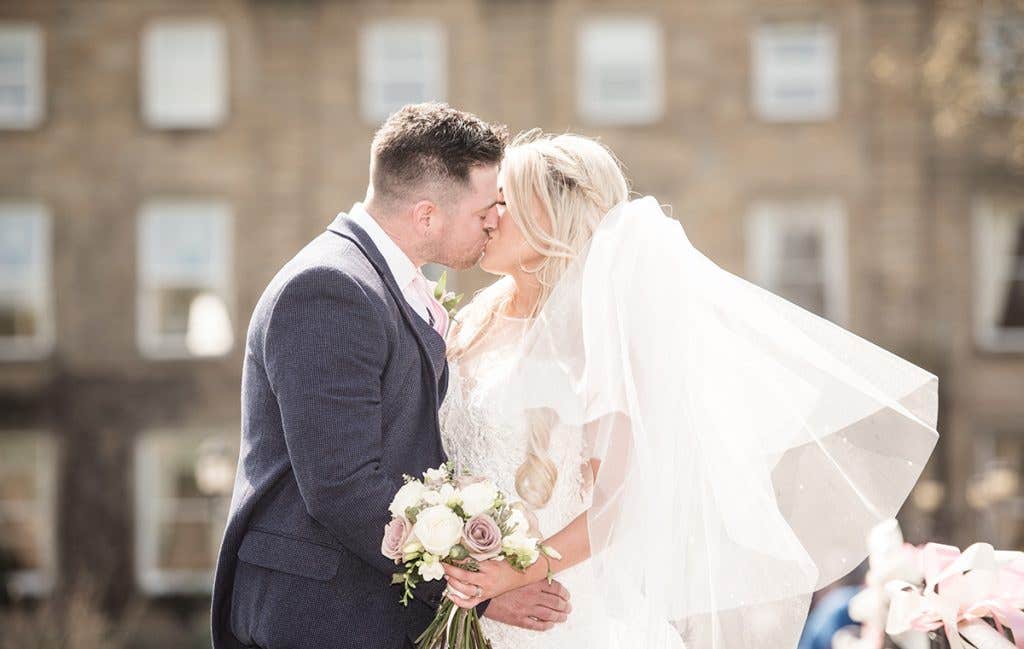 Charlotte bought her dress from WED2B Rotherham in January, just three months before the wedding. “Unfortunately I didn’t really get the happy run up to my wedding day that I’d dreamed of,” she says. “I left everything until the last minute due to my Mum being very poorly. I knew I wanted a fitted dress with a fishtail and the Platinum Edition Dakota dress was perfect. As soon as I put it on I knew it was the one. I didn’t want to take it off! It had so much pretty detail and it had an illusion mesh part at the top, which I really liked, because I didn’t want to show too much cleavage.”

The wedding was held at Waterton Park, in West Yorkshire, a big manor house on an island with a long bridge leading to it. “Every time we went to visit it looked more and more beautiful,” says Charlotte. “My Brother walked me down the aisle and I had mixed feelings about the ceremony. My Dad always said he wanted to live long enough to walk me down the aisle but sadly he didn’t, so it was very emotional. I had a heart locket tied around my bouquet with two photos of my Dad inside. We chose to keep it short and sweet with our vows and didn’t have any readings, as we didn’t want our four-year-old son to have to sit through a long ceremony. My favourite memory was definitely seeing Shaun in his suit waiting for me at the end of the aisle.” 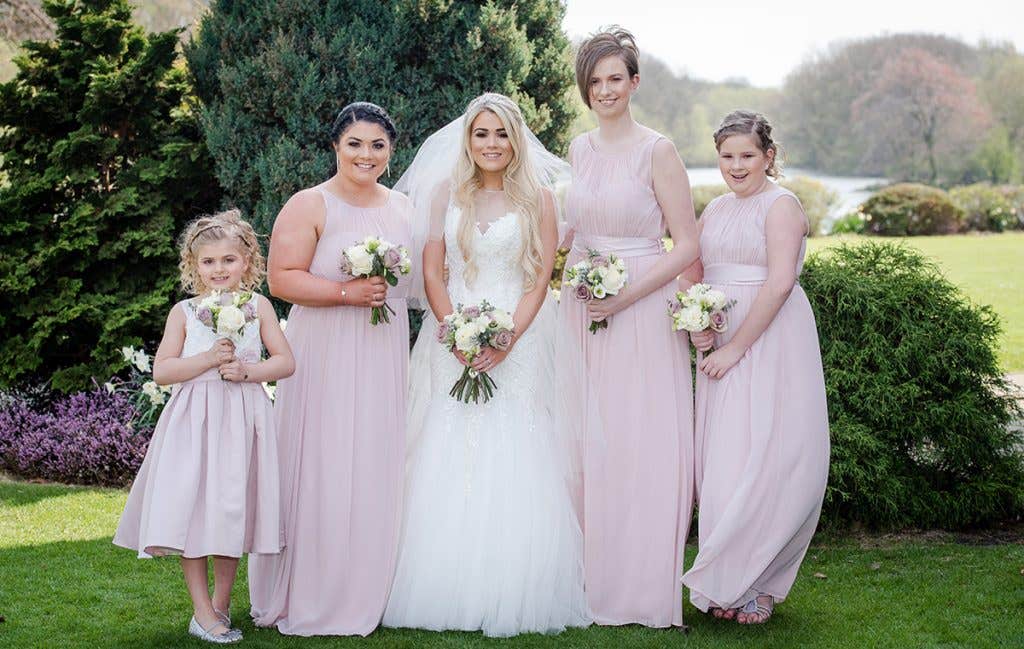 Eat, drink and be merry

The ceremony was followed by a five-course meal and then a disco and buffet that went on until midnight. “The speeches were a highlight for me,” smiles Charlotte. “My brother did a brilliant one about my Dad, which was very special and there wasn’t a dry eye in the room. One of the best moments was my new husband telling me how beautiful I looked and feeling like a princess all day long.”

A surprise proposal at home was the start of Georgia and Travis’s wedding journey. “We had been together for three years and had a 10-month-old daughter, Kennedy-Mai,” says Georgia. “We were at home and I went upstairs to change her. Travis stood over me, which I thought was very odd until, to my surprise, a ring appeared from underneath Kennedy’s top! Then I noticed he had arranged some Scrabble letters to say, ‘Will you marry Daddy?’. To which I screeched yes! We always laugh about it, because every previous holiday I’d always expected to be asked but he completely took me by surprise by asking at home!” 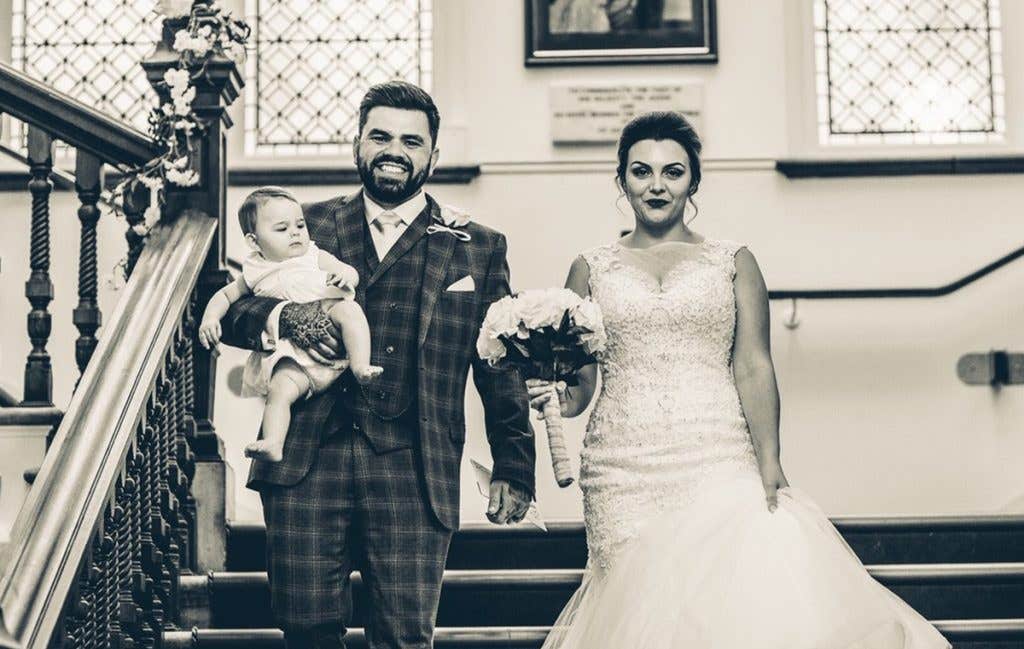 Shopping for wedding gowns in Norwich

Georgia chose Platinum Edition Fabiana for her big day. “My store experience was great,” she says. “I walked in and was instantly shown where to look and told how the store worked. I chose four wedding gowns but I loved the classic look of Fabiana and the pearl and diamanté embellishment. It felt amazing when I tried it on and I instantly knew it was the one. It hugged me in all the right places and flattered my figure. I bought it there and then! I also bought an underskirt and I would really recommend this.” 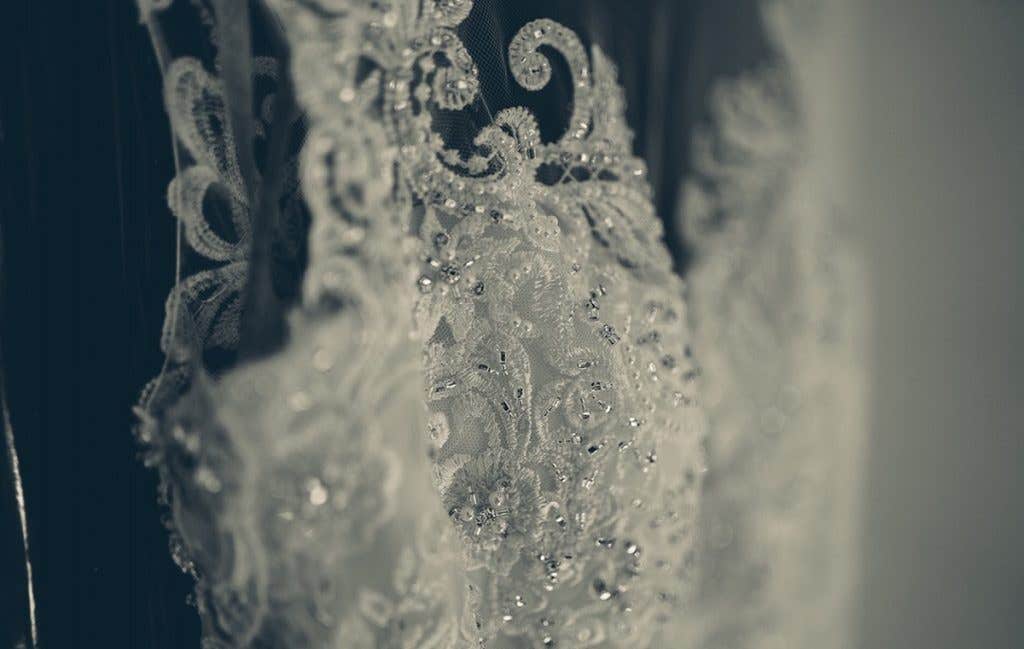 Georgia and Travis married at their local town hall before heading to Parkhill Hotel in Oulton Broad for their reception. “Our ceremony was small,” says Georgia. “We had 70 people and my Dad walked me down the aisle to Ella Henderson’s ‘Yours’. We had a simple reading and listened to Ed Sheeran while signing the register. The highlight for me was seeing Travis’s face when I entered the room. I definitely got the reaction I’d hoped for. If not I’d have walked out and then back in again!”

The reception was held in the barn at the venue and there was a BBQ and a DJ. The couple's first dance was to Oasis’s ‘Wonderwall’, sung by a well-known artist. “We had everyone hugging and singing it around us,” smiles Georgia. “There were so many memorable moments but I think the best moment was the vows and finally seeing Travis after such a nervous morning.” 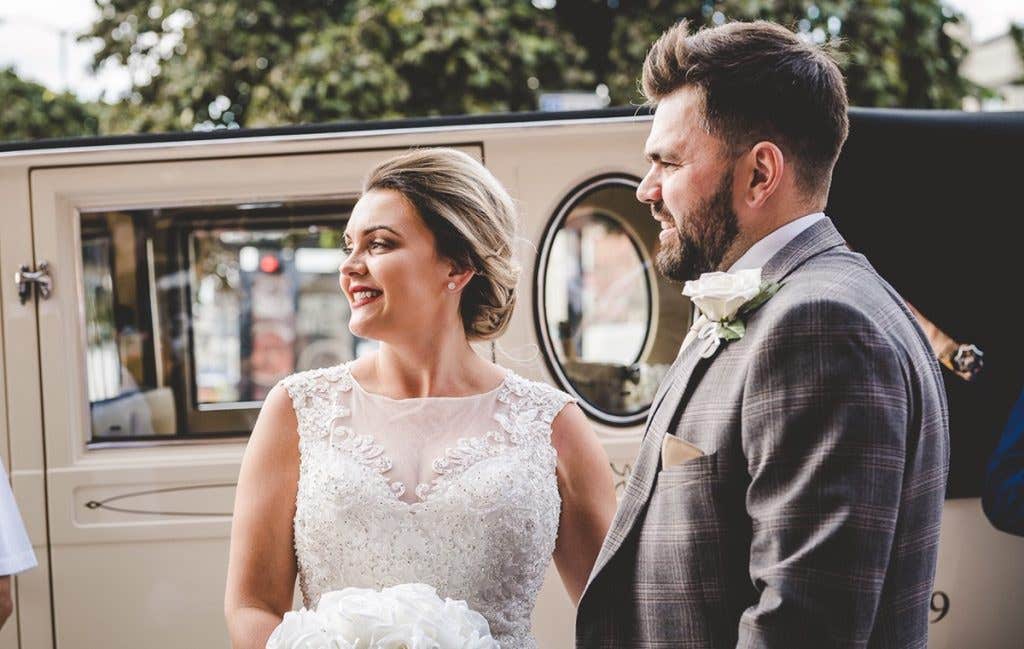 Gillian and Jimmy met while Gillian was visiting a friend in Jimmy’s native Sweden. “He had known my friend since they were little,” says Gillian. The couple were living in Sweden when Jimmy proposed but had travelled to Scotland for Christmas with Gillian’s family. “We were all having Christmas dinner together and we had each saved a gift to open,” she says. “Jimmy had wrapped up boxes within boxes within boxes and in the last box was a chocolate biscuit. When I opened this and looked confused he went down on one knee and popped the question, to the surprise of my sisters and aunt! My Mum and Dad were the only ones who knew he was going to propose.” 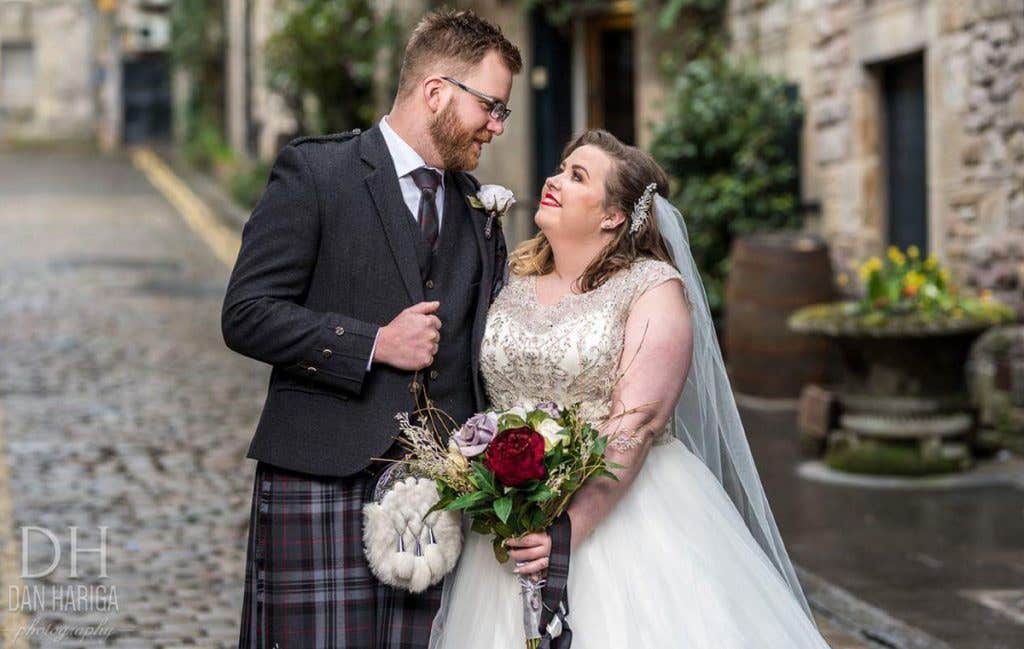 Gillian wore the Platinum Edition Regan dress by Bellami. “The dress just felt right when I put it on,” she says. “It was full, flowing and felt very flattering and secure on my figure, as I'm quite busty. I did go back to the store the weekend after to try on a few more wedding gowns to be sure, but this just confirmed to me that I'd made the right decision.”

The wedding was held at the Rowantree in Edinburgh in March 2018. “We chose this venue as we wanted something a bit unusual that wouldn’t look too empty for a small wedding of 40 guests,” says Gillian. “From the moment we saw it we fell in love. It just took our breath away. We loved the stones, the feel and all the candles. It was so us! We had a humanist ceremony carried out by Marilyn Jackson from the Humanist Society Scotland. I was piped in to ‘Highland Cathedral’ played on the bagpipes. The atmosphere this created was outstanding and there wasn’t a dry eye in the place, including me, the groom and the best man.” 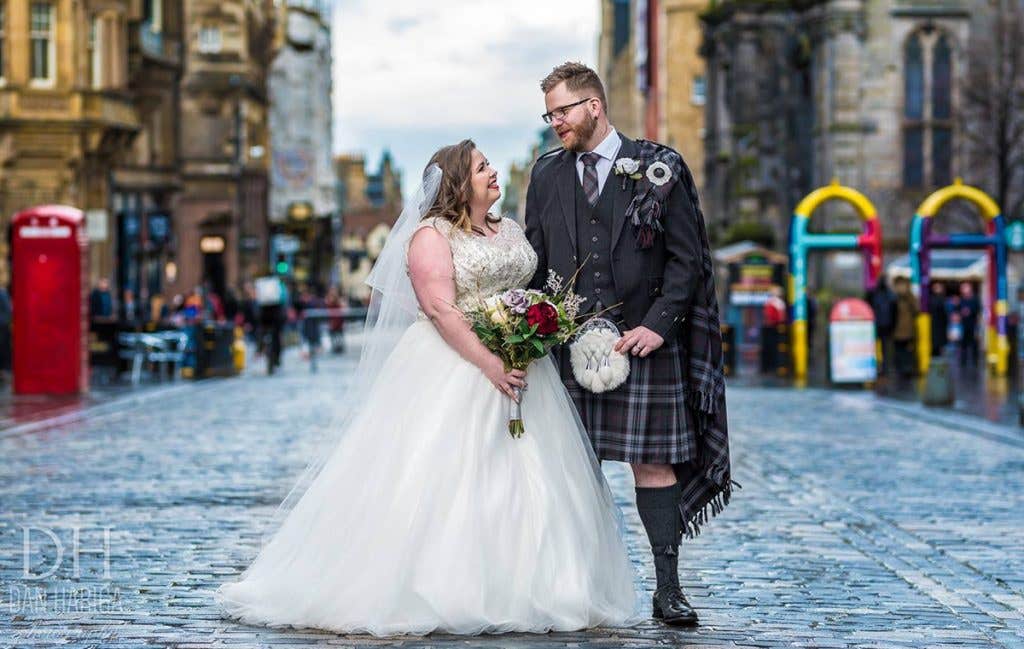 After the ceremony there were drinks and a candy buffet while the newlyweds had some photos taken on Edinburgh’s Royal Mile. Then there was a sit-down meal followed by speeches and cake cutting. “We knew we were expecting our first child at Christmas,” says Gillian. “So we decided to go for a 4D scan before the wedding and then announce it to our guests with a balloon release that we were having a little girl! This was then followed by our first dance to a Swedish song called ‘Du Är Allt’. Then the party continued and we ended the night dancing to ‘Loch Lomond’ in the traditional way.”

Be one of our Platinum Edition brides...

Don’t forget you could be one of the few lucky brides to wear one of these truly unique, luxury wedding gowns. We have the following Platinum Edition wedding gowns in stores now; Reno and Columbia from the Signature Collection, Viva Bride’s Sophiella and Anna Sorrano’s Fabiana .

Alternatively, click here to discover the full range of deluxe Platinum Edition wedding gowns. And, if you would also like to be a part of one of our real wedding features, send your favourite photo to info@wed2b.co.uk and we’ll be in touch!

Wedding Dresses, Wedding Inspiration & Brides' Stories
We use cookies on our website to make your experience better. You can click here to update your settings. Otherwise, we'll assume you're OK to continue.