A shared love of superheroes and Disney helped to inspire this wonderful big day. Our WED2B Real Wedding Winchester feature reveals more: Joanne and James met on Tinder, “I’m so glad I swiped right!” says Joanne. “Our first date was...

Joanne and James met on Tinder, “I’m so glad I swiped right!” says Joanne. “Our first date was in Reading in 2013, two weeks after we first started talking. I ended up waiting two hours for James to turn up, as his bank was closed so he didn’t have any money. In the end, his mum had to lend him some! When he did turn up we went to Ed’s Diner for milkshakes. I’d told him beforehand that they were really good, but I’d never actually been there before. Luckily they were amazing! We then walked around town talking and getting to know each other before heading to the cinema to watch Bad Neighbours. My first date with James was actually my first date ever, and it was great.”

James proposed on 29th November 2015. “We were in Newbury to visit James’s Sister, Mum and nieces,” says Joanne. “We were going to go and feed the ducks along the canal but we arrived earlier than everyone else. James said we should go ahead and feed the ducks without them but I said no, because we were supposed to be doing it later with his family. I almost ruined the proposal! In the end he convinced me, so we walked down the canal to the bridge where we played pooh sticks on our second date. When we got there James asked if I wanted to play pooh sticks again so we did. Then I turned around and he was on his knee holding out a box. He said, ‘Joanne Ruth Mosley, will you marry me?’ and I replied, ’Are you serious?’. I was in shock but I did say yes eventually! I found out later that he’d asked my Dad’s permission too, which I was very happy about. Straight after the proposal I called my family to let them know and I was basically in shock for the rest of the day!" 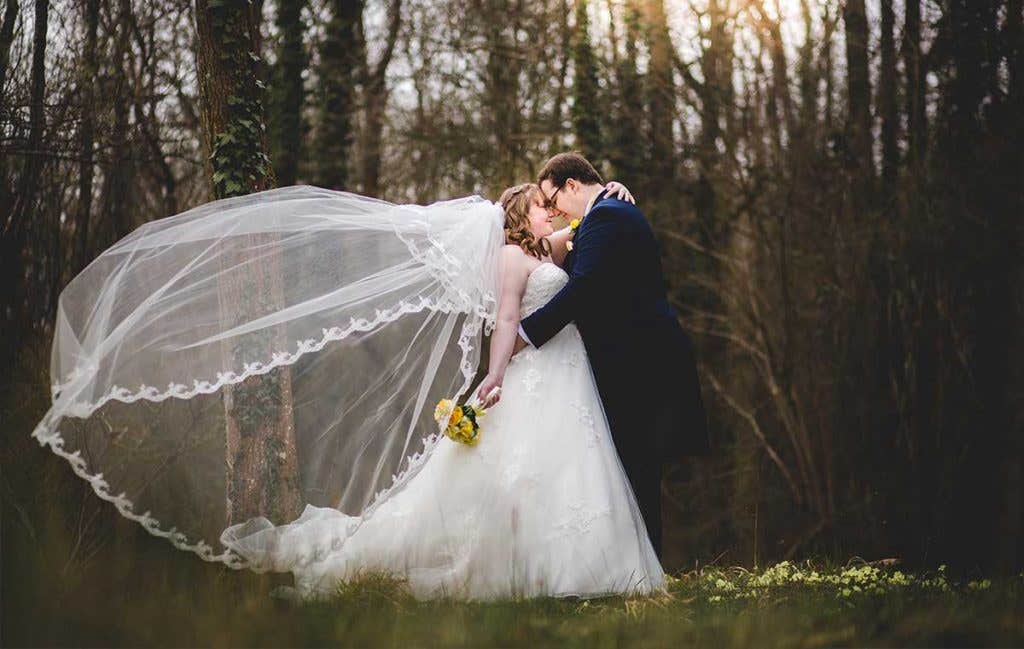 Joanne visited WED2B’s Camberley store with her Mum and Sister. “We arrived and were seen to straight away, told how the store worked and where I should look for dresses,” says Joanne. “The store assistant was also more than happy to help me try on as many dresses as I liked. I think it ended up being seven altogether! Once I had narrowed it down to two, they helped me switch between them until I made a decision. The whole experience couldn’t have been better.”

“I bought the Serena dress, and I absolutely loved it,” says Joanne. “I’d always dreamt of wearing a big dress and I loved the lace details too. I felt amazing when I put it on, and when I added all the extras it just made the dress even more perfect.” Joanne also bought the Deco headpiece, the Maisie veil, an underskirt and a sparkly belt to complete her look. “The headpiece and belt both added a little extra sparkle,” she says. “My veil complemented my dress beautifully, as it matched the lace on the dress, and the underskirt made my dress that bit pouffier, which was perfect!” 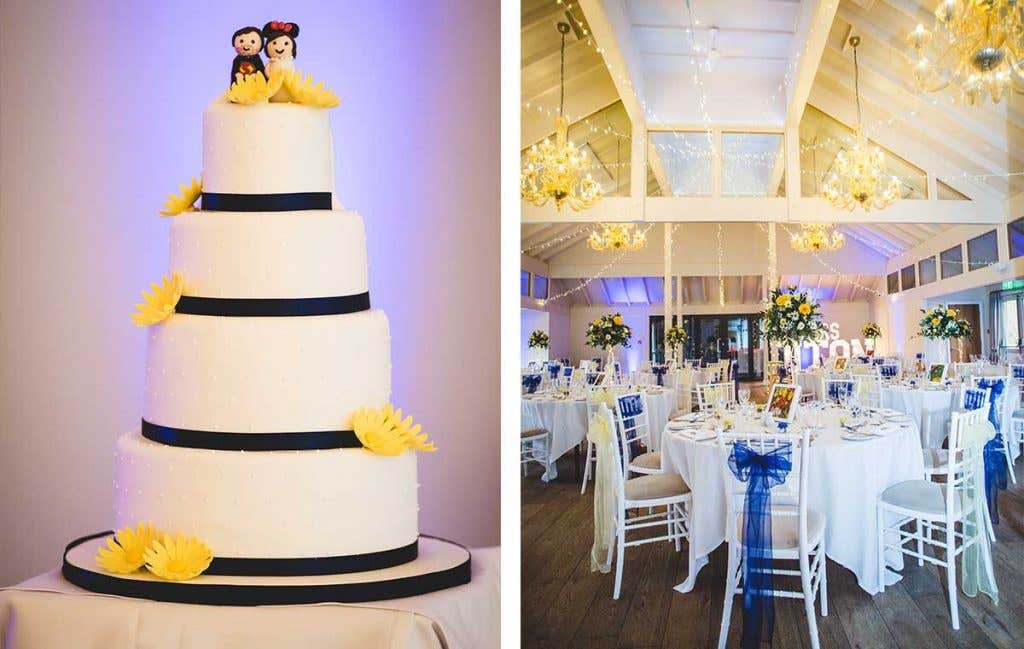 The couple married at Marwell Hotel, near Winchester, on 7th April 2018. “Marwell Hotel is right opposite the zoo, which is one of the reasons we chose it,” says Joanne. “We were originally planning to get married at the zoo but ended up switching to the hotel. I am so glad we did as it was perfect, the whole day was amazing there.”

The bride was escorted down the aisle by her Dad. “I don’t know who was shaking more!” she laughs. “The music was ‘A Thousand Years’ by Piano Guys. We also had ‘Perfect’ by Piano Guys and ‘A Million Dreams’ from The Greatest Showman while we were signing the register. We walked out to ‘Rhythm of Love’ by the Plain White T’s. I think my favourite memory from the ceremony was when James and I said I do and became husband and wife.”

A reception fit for a superhero

After the ceremony everyone gathered for photos and a drinks reception in the hotel foyer. “The main colour theme was yellow and navy blue but we also had a slight superhero theme,” says Joanne. “Our tables were all named after different superheroes and our cake was traditional looking on one side, with dots, blue ribbon and yellow flowers, but on the other side there were four superhero layers; Iron Man, Spider-Man, Superman and Batman. Everyone loved it as much as we did! There were also a few Disney elements too. The name places were written in Disney font, the favours had Disney stickers and the bride on the cake topper had Minnie Mouse ears on.” 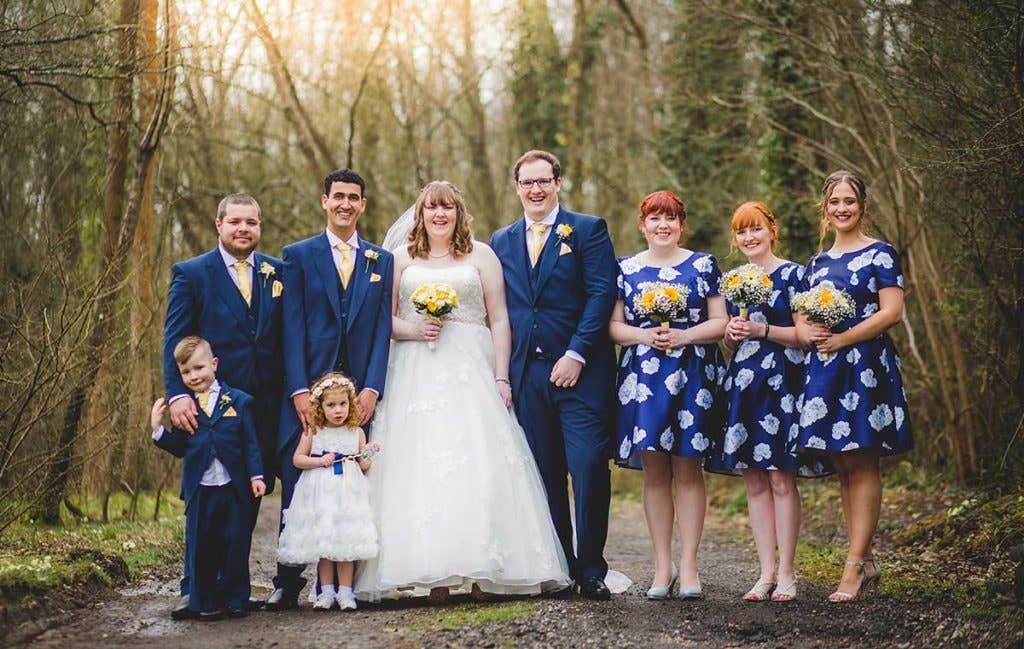 After the wedding breakfast, there were speeches by Joanne’s Dad, James and the best man before the reception room was transformed for the evening do. “We had a DJ and a dance floor come in and the tables were pushed back to make more room for dancing, plus a buffet later in the evening,” says Joanne. “It’s so hard to pick my most memorable moment, the whole day was amazing and I wish I could do it all over again. It all goes by so quickly!”

Did your wedding have the wow factor like our Real Wedding Winchester feature? If you would like to be a part of our real weddings feature send your favourite photo to info@wed2b.co.uk and we’ll be in touch!