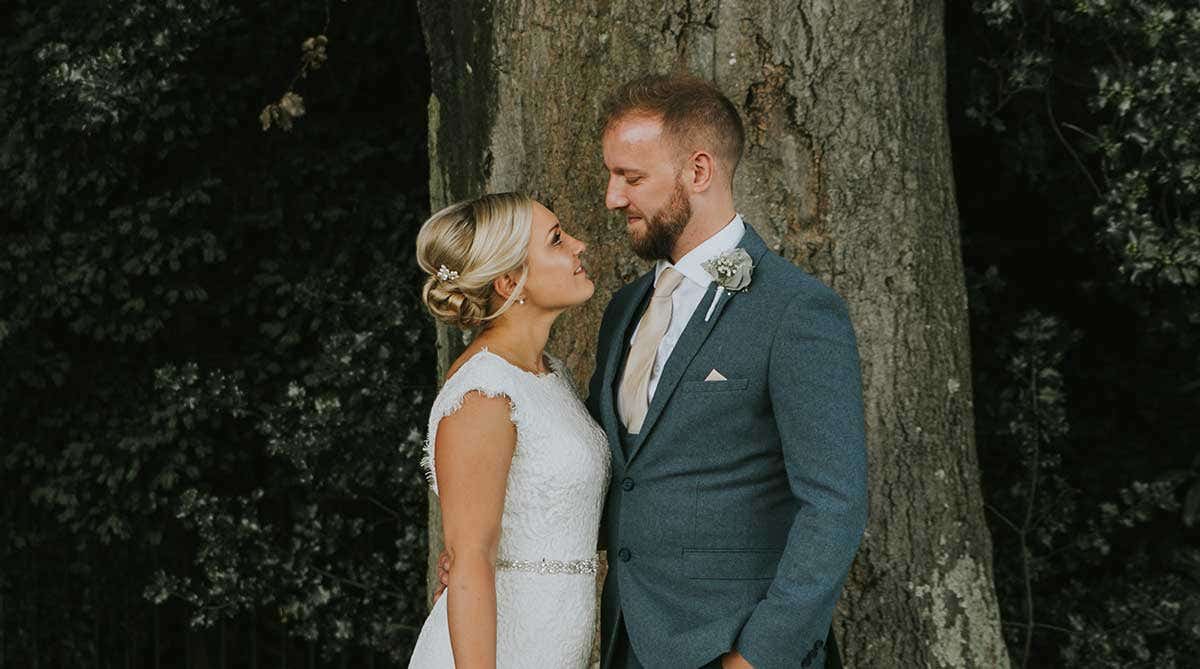 Jade and Paul first met at the leisure centre where they were both working. “I was a lifeguard and Paul was a manager,” says Jade. “We became close after a work night out and Paul asked me out on a date, for dinner and movie. A year down the line we moved in together and, needless to say, we didn’t work together for very long afterwards! Paul is now a policeman and I’m a paramedic." 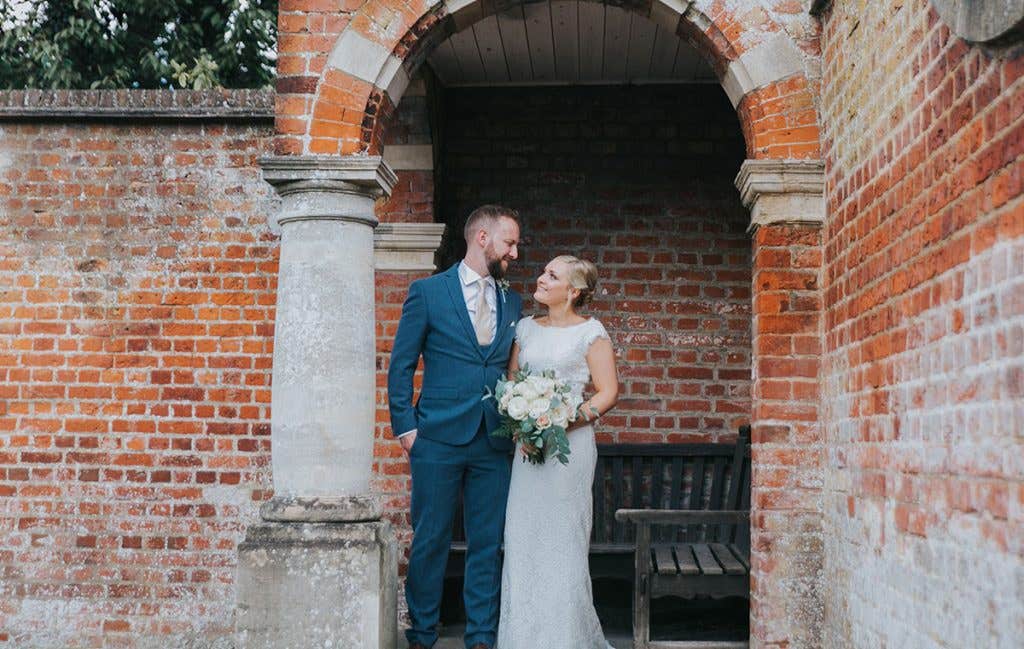 Three years later Paul popped the question on Christmas morning. “He had difficulty finding the ring but luckily came across an independent jeweller in Richmond, and spotted the perfect ring in the window,” says Jade. “Paul and I were at home on our own and started opening presents from each other. My last present was a scroll that Paul had made, featuring lyrics from our two favourite songs. At the bottom were the words, ‘Will you marry me?’. While I was reading Paul had got down on one knee. I was so overwhelmed with emotion, I had no idea! It was a low-key proposal, but very intimate and perfect for us. The best part was that we got to spend the rest of Christmas Day visiting family and sharing the news! The scroll is now framed on the wall as a lovely reminder.” 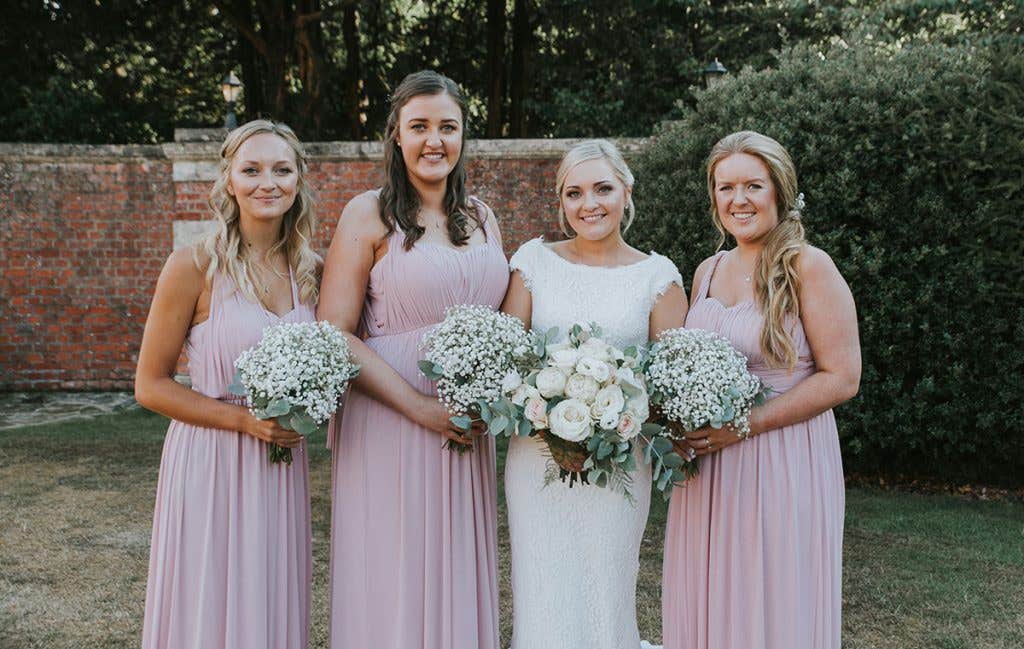 Jade visited WED2B’s Bromley store in January 2018 with her Mum and three bridesmaids. “Me being me, I originally purchased a different dress to the one I wore!” laughs Jade. “ I bought the first one in January, however, something just didn’t feel quite right. It just didn’t feel like me. So I went back in April and finally found the perfect one! One I hadn’t even tried on during my first visit.” 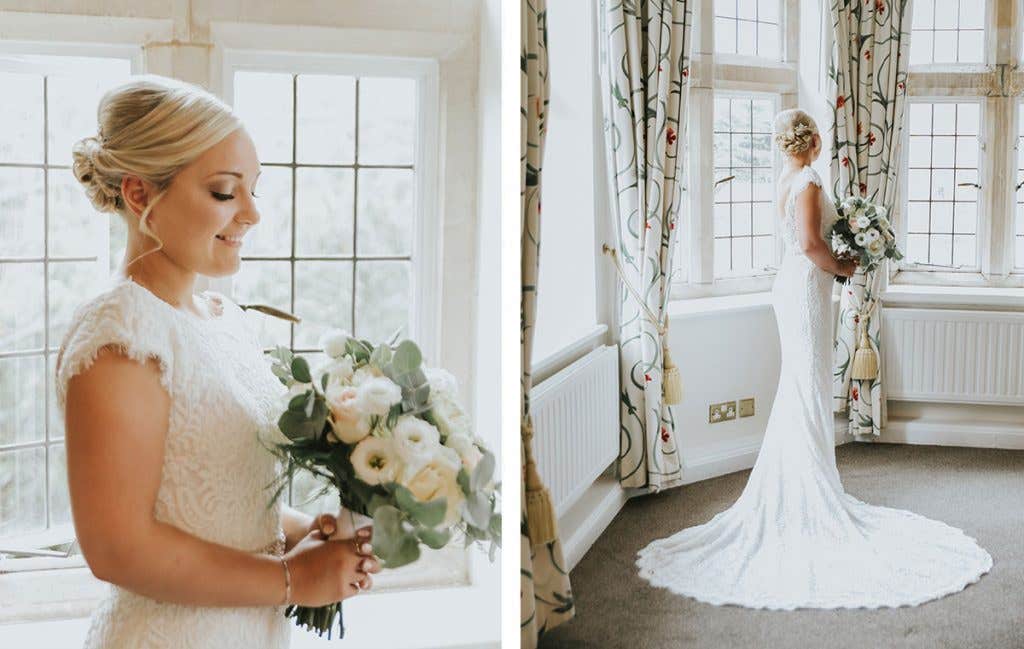 The dress Jade eventually fell in love with was Summer by Heidi Hudson. “I can’t even describe the feeling when I put it on, I felt amazing!” says Jade. “I’m quite petite and it just fitted me perfectly in every way. Even though it was quite figure hugging, it was really comfortable. The backless feature was so stunning and the all-over lace looked absolutely beautiful. I had such a great experience with the Bromley store too. The staff were so kind and friendly. When I went back after my change of mind, they were so helpful and strived to ensure I was 100% happy. I couldn’t have asked for more from them, they went above and beyond.”

Jade also added an Estella belt to her outfit. “As the dress itself is quite minimal, I thought an added bit of sparkle would really stand out,” says Jade. “I also wanted to have simple jewellery, so the belt was a real statement piece and finished the outfit off perfectly.” 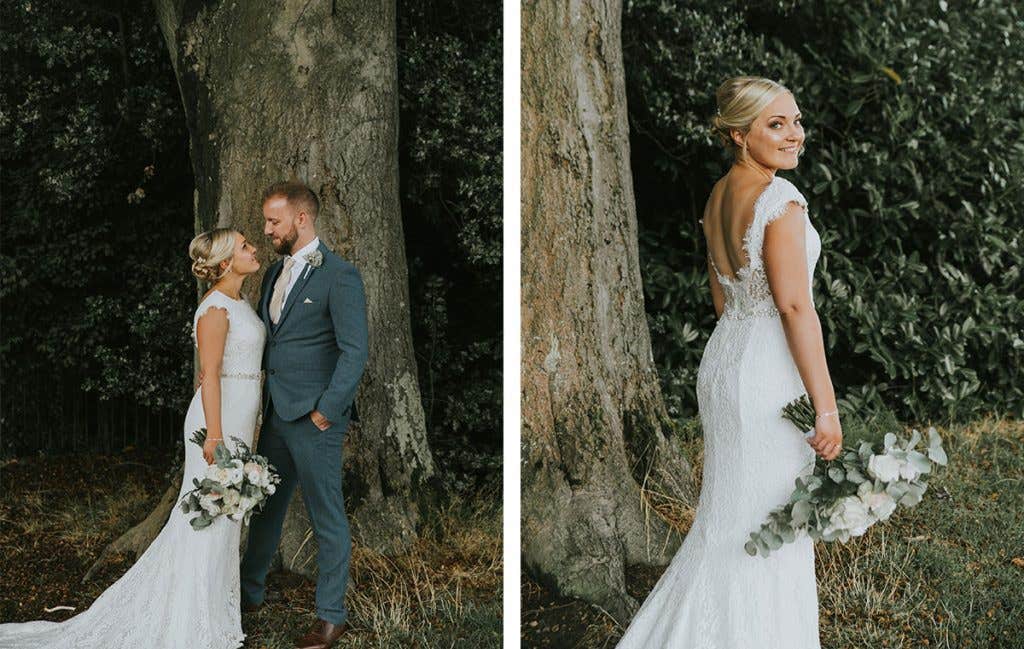 The couple chose The Warren, in Bromley, as the wedding venue. “The Warren is owned by the Metropolitan Police and, as Paul is a police officer with the Met, we were fortunate enough to be able to get married there,” says Jade. “Paul’s Dad is a retired policeman, so he also has a connection to The Warren. When we went to view it, we fell in love straight away. It's a large country house set in 22 acres of beautiful grounds and it offered everything we wanted. The date we booked was 10th August, which was also the date my great-grandparents got married many years ago!” 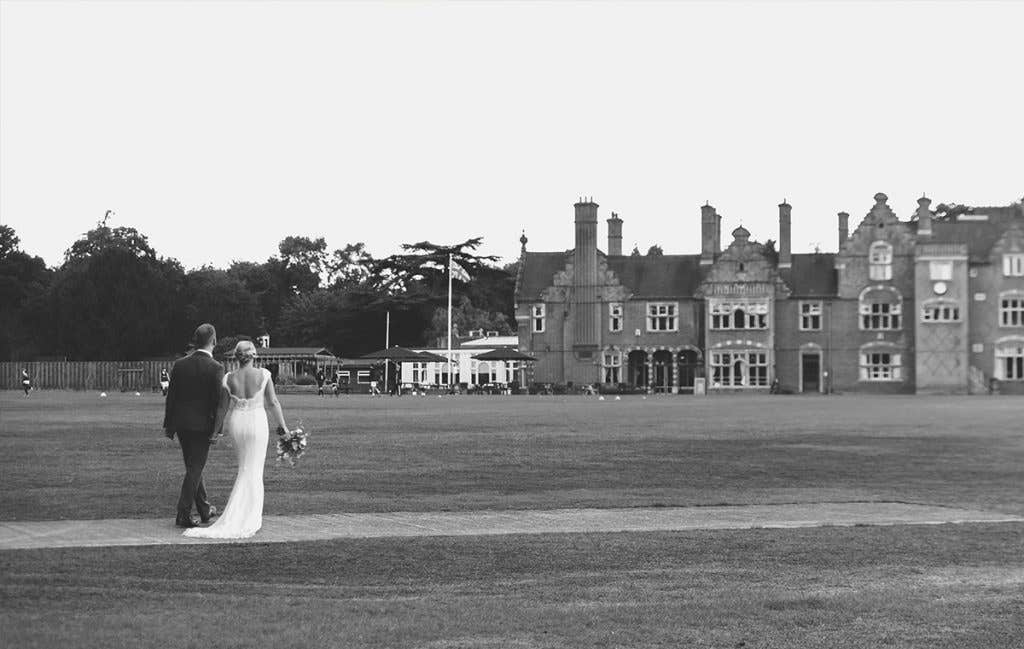 “The ceremony was perfect but, as everyone says, it went so quickly!” says Jade. “Paul’s brother-in-law, a talented guitar player, played ‘Stand By Me’ as I walked down the aisle with my Dad. My lovely 14-year-old sister also read a beautiful poem, which definitely got a few people crying. One of the most amusing things was the torrential downpour we had during the ceremony. Even though it was mid-August, and there had been amazing sunshine when we entered, the heavens opened. There was even thunder and lightning while we were saying our vows. Luckily we were inside!” 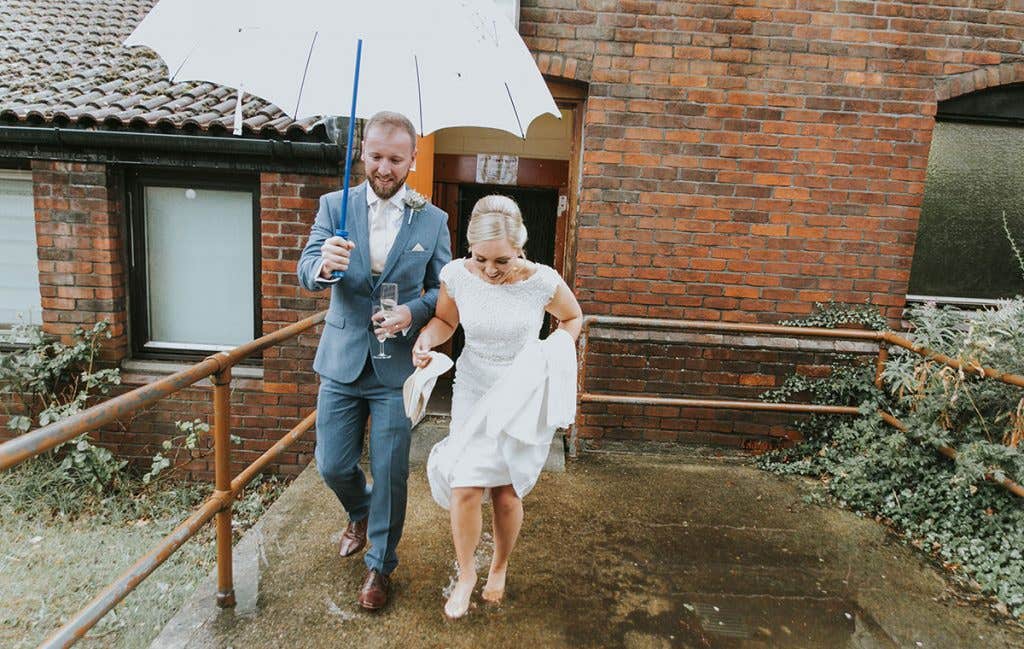 After the ceremony the rainy wedding day continued and everyone had to run through the downpour to get to the reception drinks in another part of the venue. “My most memorable moment was having to take my shoes off and hike my dress up after the ceremony to cross a huge puddle during the storm!” laughs Jade. “I never imagined I would be doing that in the middle of August, but that’s just the nature of the unpredictable English weather! The manager then had to dry my feet for me so I could put my shoes back on once we were under cover!” 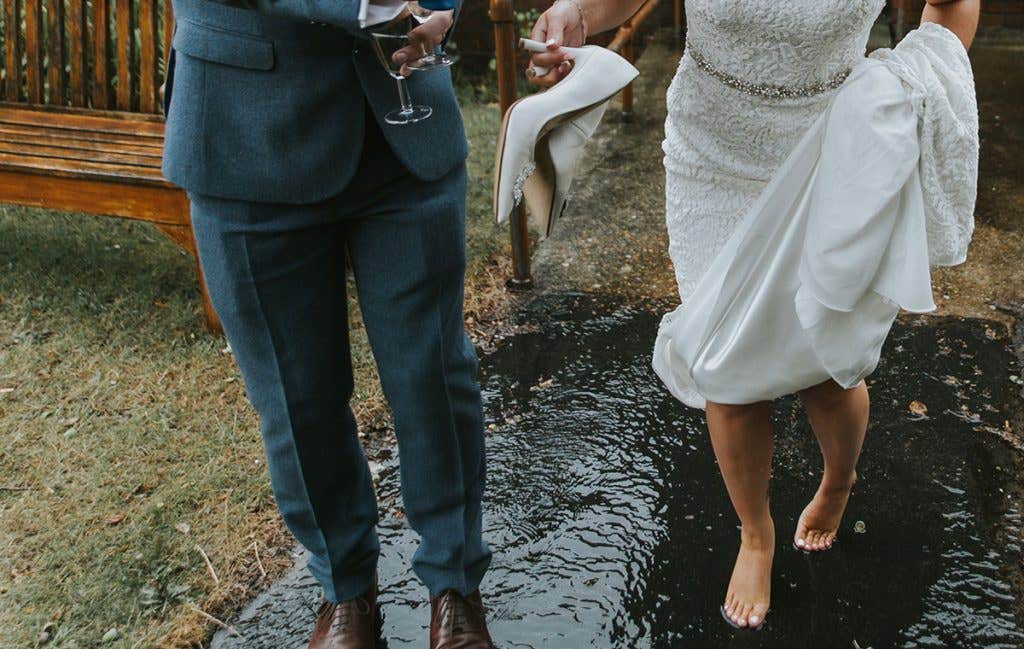 The wedding didn’t really have a theme, but Jade knew she wanted very soft, natural colours. “The chairs in the venue were white with white lace sashes and we added tall floral centrepieces, created by my florist,” says Jade. “These matched my bouquet and consisted of mainly white flowers, with hints of pink and soft, natural greenery. I’d also filled white birdcages with faux white rose vines and placed them down the aisle. Our table plan was made of white card with gold writing and tables were named after musicals. We’re huge fans of going to the theatre, and one of our very first dates was watching a musical in the West End.” 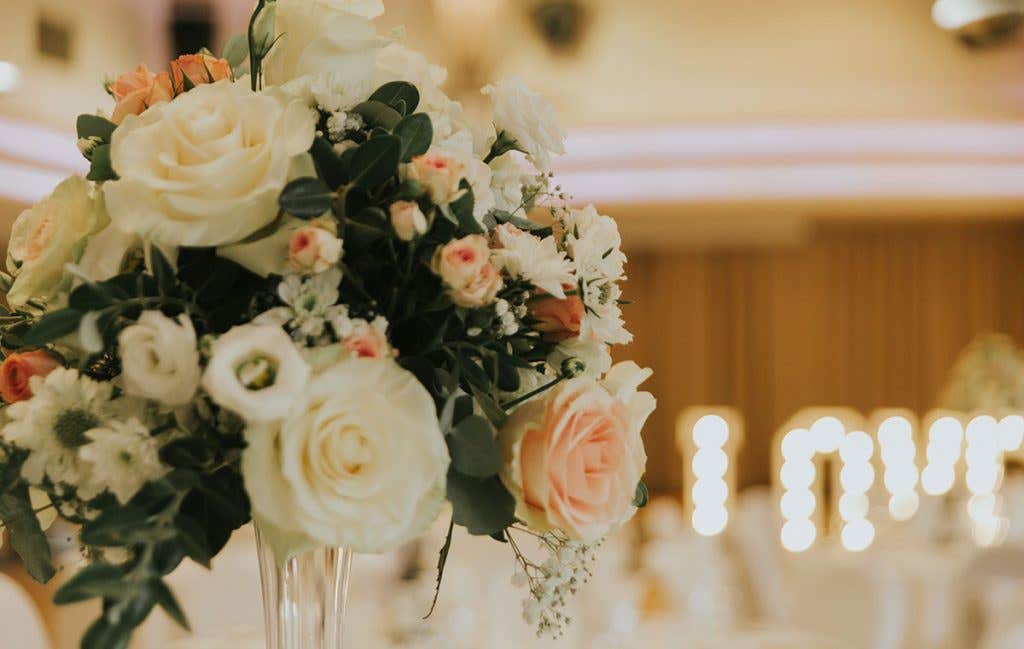 One slice or two?

The cake was a three-tiered chocolate cake covered in white frosting to complement the day's understated look. The florist also added three beautiful sprays of flowers and it was topped off by a gold ‘Mr and Mrs Arnold’ cake topper. “The cake was made by a very talented school friend of mine,” says Jade. 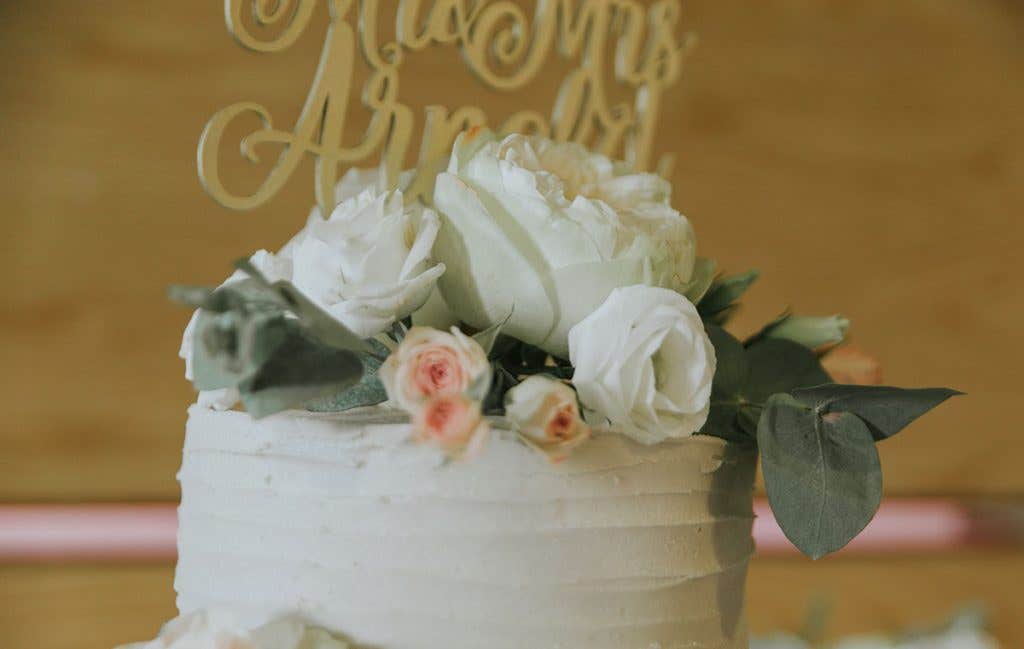 And after a rainy wedding day the sun shone…

After a few drinks and some photos the rainy wedding day cleared up and the sun started to make an appearance again as everyone sat down for a three-course meal. “After dinner, Paul, his Best Man, and my Dad gave their speeches, which got everyone laughing!” says Jade. “Then there was time for people to relax and mingle, so Paul and I took the opportunity to have more photos taken while it was dry outside.” The newlywed’s first dance was to ‘Kiss Me’ by Ed Sheeran. 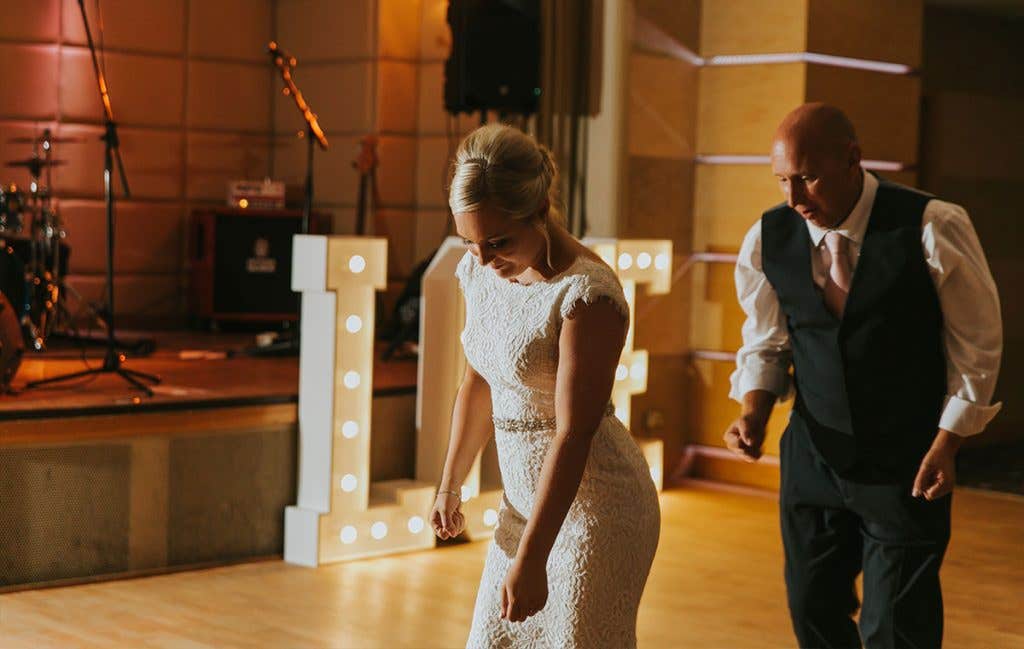 “Later we had a buffet, and then my Dad and I did our Dad and Daughter dance,” says Jade. “This was a funny, ‘mash-up’ dance to a mix of songs, including ‘Single Ladies’, ‘Time Warp’, and ‘Gangnam Style’, to name a few. Plus, Dad and I had only practiced for a week beforehand! The dance went really well though and it surprised all of our guests. My Dad works with me in the London Ambulance Service, so we had a lot of our colleagues there. It felt amazing to surprise and entertain everyone with a funny dance. I was so proud of my Dad and his dancing, he really put a lot of effort into it and definitely didn’t disappoint!" 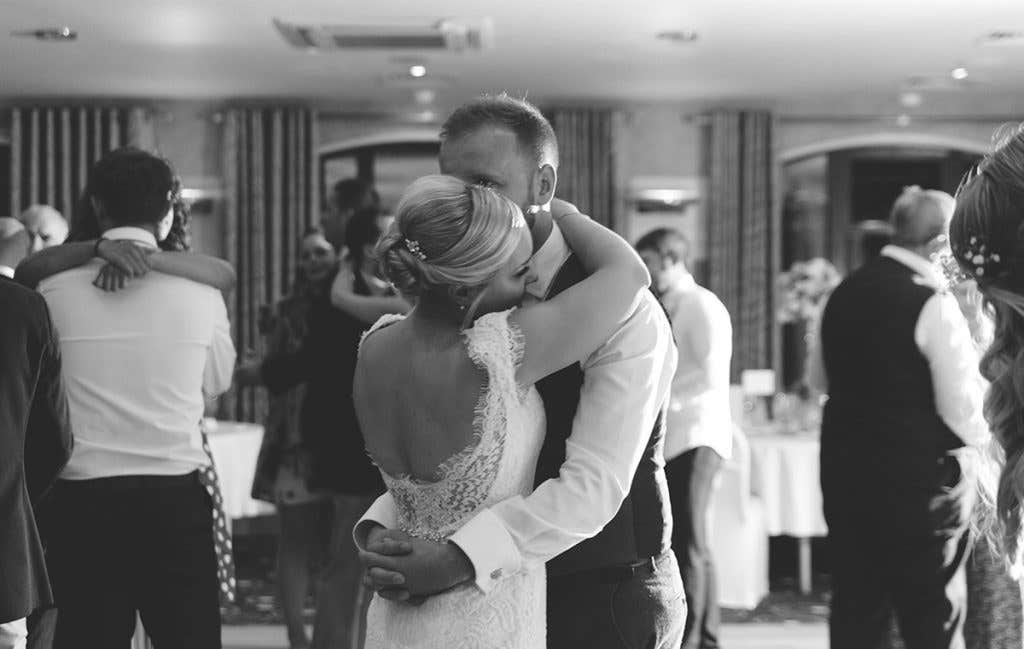 A bridal shower to remember

“The highlight definitely had to be the downpour during the ceremony,” says Jade. “I was originally so upset at the potential of a rainy wedding day, especially after the heatwave we’d been having, but actually, the storm was just unbelievable! The fact that it only started during the ceremony and lasted about 30 mins afterwards is just surreal, but makes a very good story!”

Décor: We’ve Got It All Covered (wevegotitallcovered.co.uk)

Did your wedding have the wow factor like our rainy wedding day feature? If you would like to be a part of our real weddings feature send your favourite photo to info@wed2b.co.uk and we’ll be in touch!