A romantic elopement in the wintery Scottish Highlands was just perfect for this happy couple. Our WED2B Real Weddings Glasgow feature reveals more: Ross first met Lanette when she was studying in Glasgow, having moved to Scotland from her native...

A romantic elopement in the wintery Scottish Highlands was just perfect for this happy couple. Our WED2B Real Weddings Glasgow feature reveals more:

Ross first met Lanette when she was studying in Glasgow, having moved to Scotland from her native Canada. Two years later they were celebrating their second anniversary in Milan, Italy, when Ross proposed. “We took a train to Lake Como to spend the day exploring the little towns with beautiful views of the lake and mountains,” says Lanette.

“While we were in the picturesque village of Bellagio we bought a bottle of wine and found a park overlooking the lake and the mountains. We sat on a bench under a tree and while Ross was opening the wine he said to me, ‘You should take a photo of the view, it looks so nice’. I turned around to take the photo and when I turned back Ross was smiling and holding out a ring! Needless to say, he asked me to marry him and I said yes. It was absolutely perfect and such a lovely surprise!” 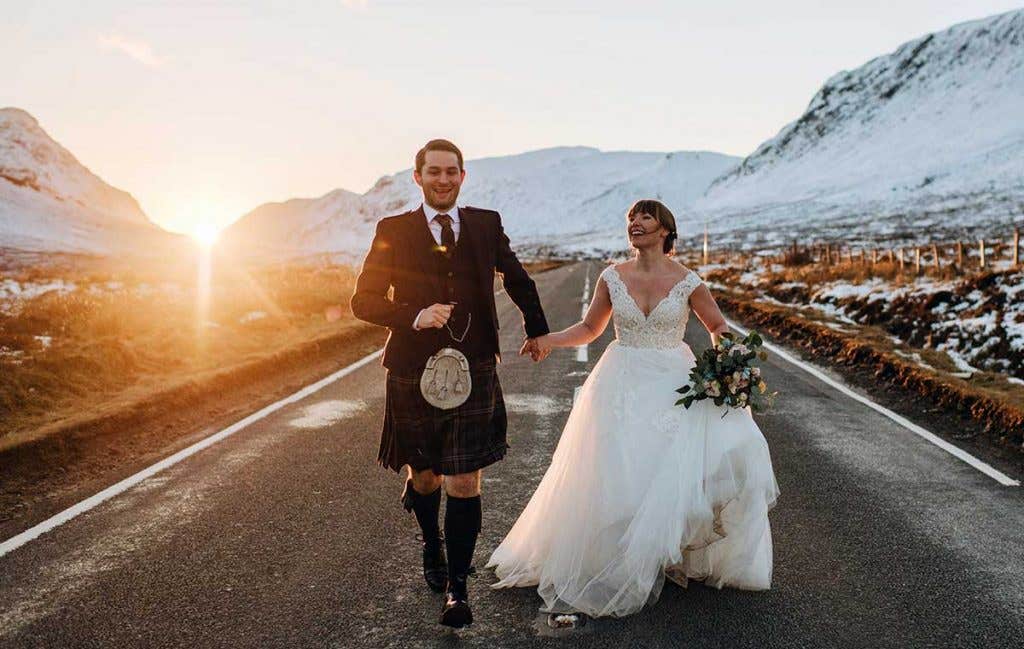 Lanette visited WED2B’s Glasgow store in November 2018 while her parents were over from Canada. “It was actually the first and only bridal shop I went to,” she says. “The whole experience was lovely and the assistants were so helpful and honest.” 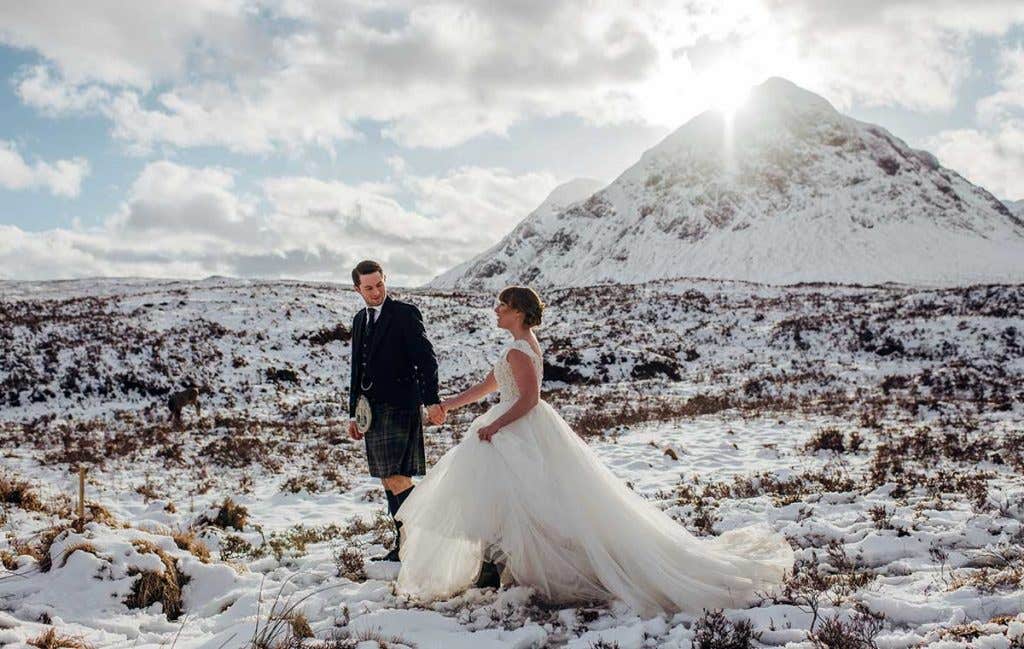 "The first dress I tried on was a Viva Bride dress called Kendra, which my Mom had picked out,” says Lanette. “I thought I would be getting a dress with a sweetheart neckline with cap sleeves or three-quarter-length sleeves. So, although I thought the dress was nice, I didn’t think it would be the one I chose. However, as soon as I looked in the mirror and opened the curtain for my Mom and my friends to see, I knew it was ‘The One’ from the looks on their faces! I tried on several other dresses in the style I was originally looking at. Nothing stood up to how amazing I felt in Kendra. This made my decision easy and I bought it that day.” 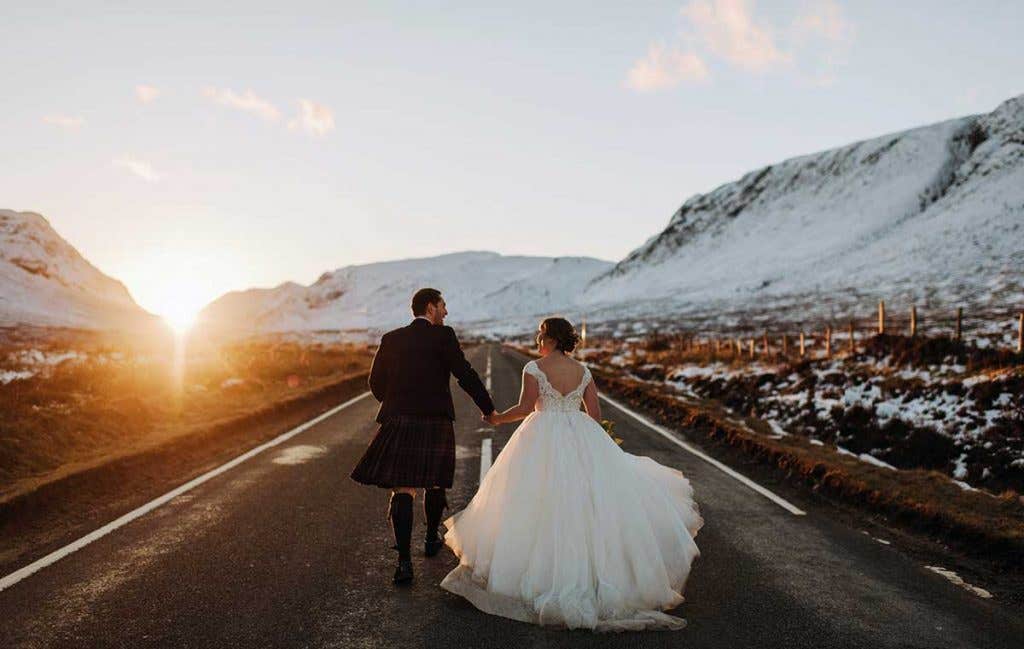 “I didn’t add any accessories as I firmly believe that usually ‘less is more’ and the dress was beautiful on its own,” says Lanette. “I also didn’t wear a veil because I didn’t want to cover the pretty scalloped, low-cut back of the dress.”

Lanette is Canadian and Ross is Scottish so, to minimise wedding planning complications and make sure everyone was included, the couple decided to elope together to the Scottish Highlands. “Weddings are shockingly expensive and it was important to make it something really personal for us. We also wanted to use our savings for a deposit on our future home together instead of on just one day,” says Lanette.

“We got married in the Glasgow City Chambers on 4th April 2018 and the only people in attendance were Ross, our two witnesses and myself. Then on 21st April, we had a wedding reception for our UK friends and family in the grand ballroom at Sloans in Glasgow. It was beautiful! Finally, we held our last reception on 21st July for our Canadian friends and family at my family home in Canada. It was an evening garden party full of fairy lights and white tents. We couldn’t have asked for better celebrations!” 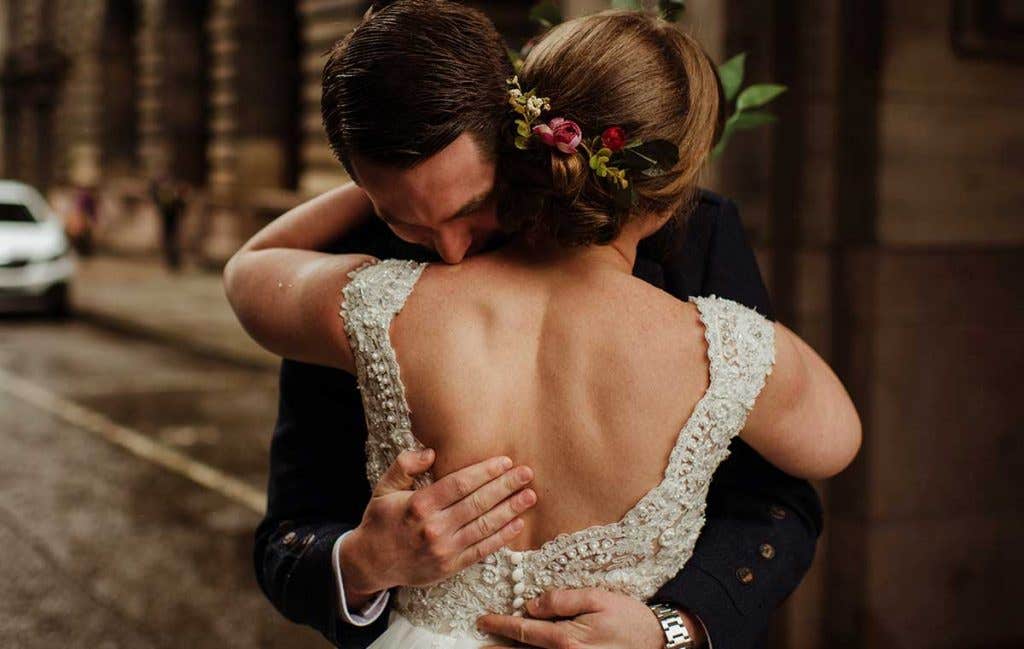 The Glasgow ceremony was simple and very personalised. “Ross got ready at his best man Kevin’s house while my maid of honour Beth and I got ready at our flat,” says Lanette. “When it was time to go Beth and I took a Black Hackney cab to George Square, where we met our photographer, Neil. Neil made sure that Ross didn’t see us pulling up and had him waiting under the Chamber arches. I walked over and tapped Ross on the shoulder to turn around and see me. Neil thankfully captured this moment beautifully.” 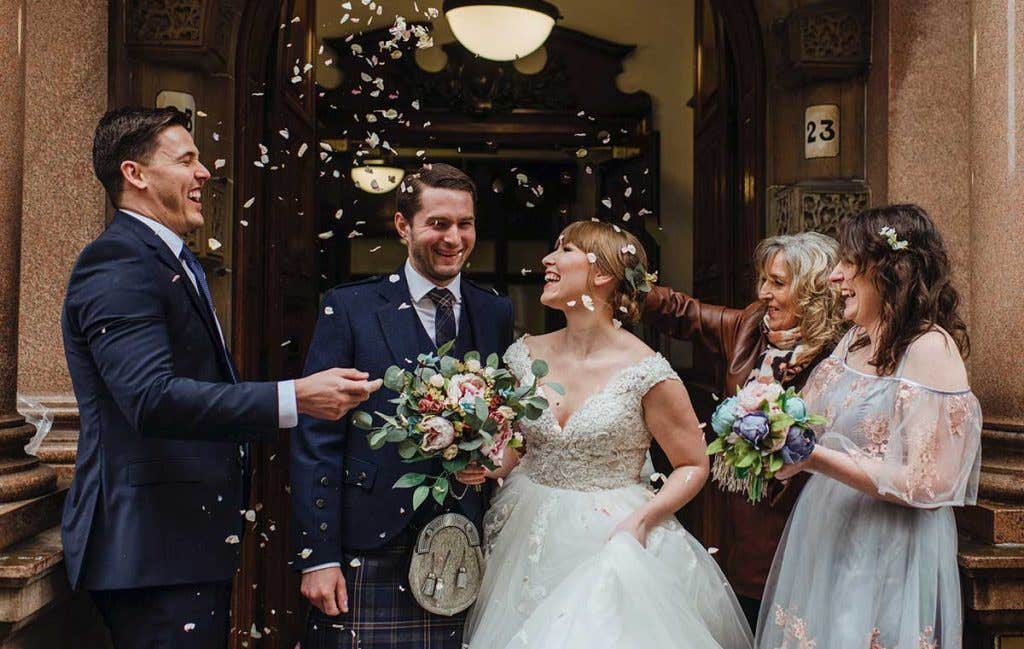 “Ross and I walked in together to the song ‘I Found You’ by Kina Grannis and Imaginary Future,” says Lanette. “We had a wonderful registrar who led us through all the necessary procedures and promises before we read vows that we had written ourselves. The best moment was seeing each other for the first time and hearing each other’s vows.”

Afterwards, the newlyweds met Ross’s mom outside the City Chambers. They then went to a nearby pub for a celebratory pint. After, Ross and Lanette headed out to the Highlands. “After our drinks, we said goodbye and drove out to Glen Coe,” says Lanette. “As we drove alongside Loch Lomond the grey skies parted and, amazingly, the sun came out! We went to several areas to take our photos, including a spot where the wild deer congregate. We also went to Glen Etive where the iconic James Bond Skyfall shot was taken, as Ross really likes James Bond.” 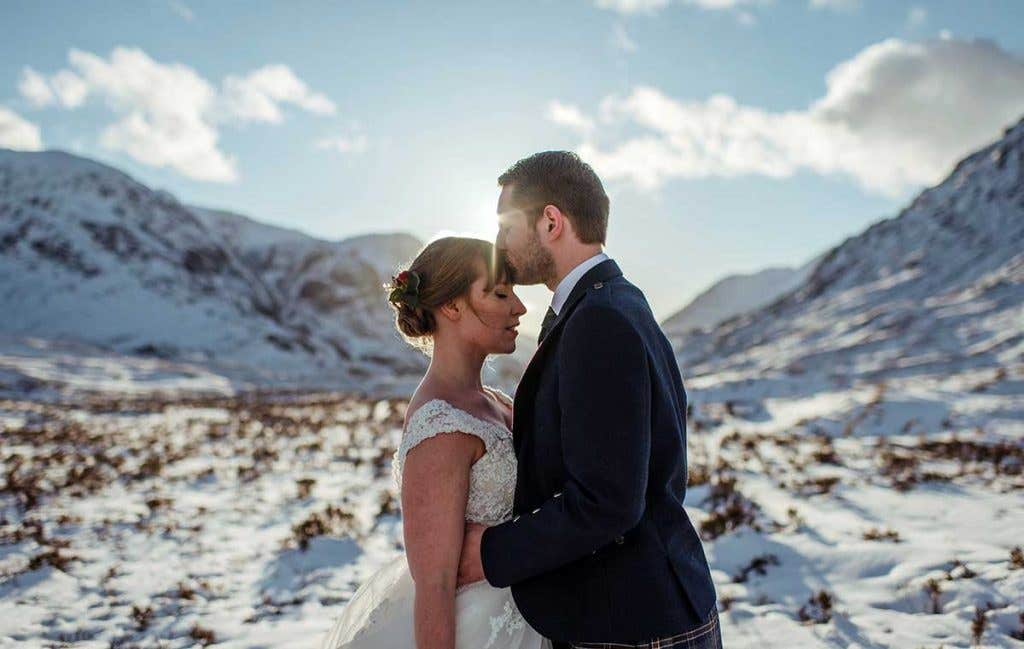 An impromptu dinner for two

The couple had booked dinner for later that evening in a hotel in Oban. “However, we got so caught up with the photos that we realised we wouldn’t be able to get back to the hotel in time,” says Lanette. “Luckily, there was a pub in Glen Coe so we pulled up and headed on in. We were greeted with some enthusiastic applause and enjoyed a great pub dinner after I finally managed to shove my dress into a booth! Our wedding day was absolutely perfect, despite the rainy day, freezing cold temperatures and not making it to dinner on time!”

Did your wedding have the wow factor like our Real Weddings Glasgow feature? If you would like to be a part of our real weddings feature? Send your favourite photo to realbride@wed2b.co.uk and we’ll be in touch!