These newlyweds followed a moving humanist wedding ceremony with conga dancing and chips! Our WED2B Real Weddings feature reveals more: Sam and Graeme met when Sam was asked by her employers to join an interview panel for new staff. Graeme...

Sam and Graeme met when Sam was asked by her employers to join an interview panel for new staff. Graeme was one of the candidates. “During the interview he was asked to compare himself to a Harry Potter character,” she says. “He confessed that he hadn’t read a single J. K. Rowling book or watched a Harry Potter film! I love Harry Potter, so my first impression was, 'What kind of weirdo is he?’ He secured the job though and we became work colleagues and then good friends. Eventually we sort of ‘drifted’ together. There was no singular defining moment that we knew we were meant to be, it was more of a slow dawning that it simply felt right.”

Will you marry me?

Graeme proposed on the 10th January. “He got his brother to craft a wand and wand box out of wood and then placed the ring on the wand,” says Sam. “I had a feeling he was going to propose but I didn’t know when or how, so I was very surprised by how he did it.” 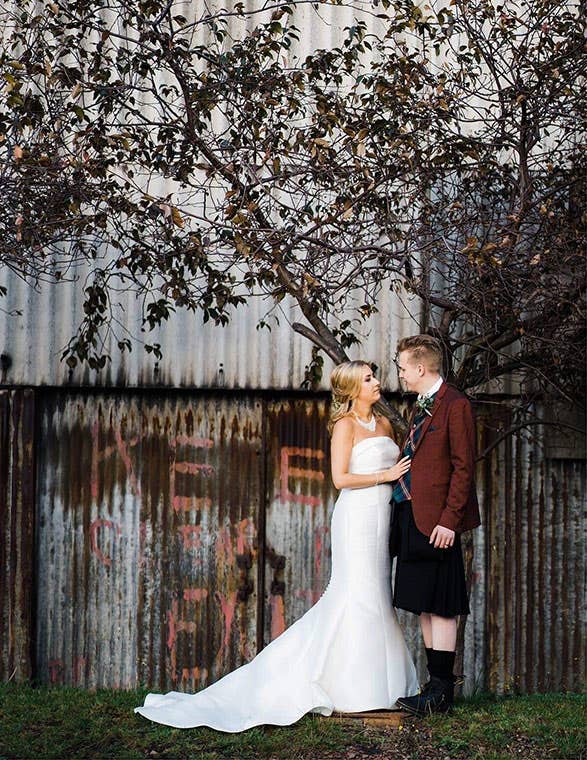 Sam chose Anna Sorrano’s Amore dress for her big day. “My store experience was fantastic,” she says. “I chose four lace dresses to try on, as I thought that was what I wanted. The shop assistant also picked out Amore for me, as she believed it was the dress for me. I cried when I put it on and I just knew it was MY dress. I also purchased WED2B’s LouLou veil in cathedral length, as it finished the look perfectly. It made me feel even more like a princess.” 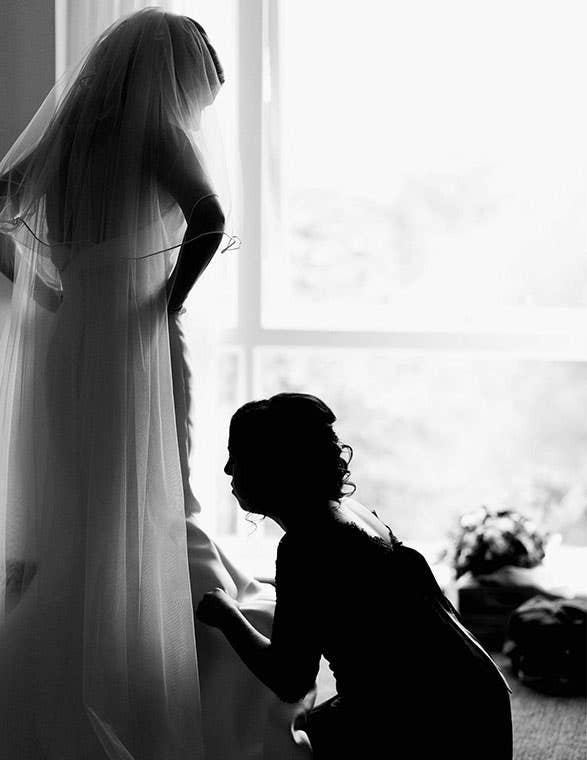 The couple married at Eskmills in Musselburgh, near Edinburgh. “Friends had told us how beautiful it was and we fell in love with it immediately, it was perfect,” says Sam. “We had a humanist wedding here on 14th October 2018.”

“I walked down the aisle to ‘At Last’ by Etta James,” says Sam. “We had a humanist wedding, which was very personal. It told the story of how Graeme and I met, and how our love grew. My Father walked me down the aisle, which was even more special than normal, as he’d recently had bowel surgery, so we weren’t sure that he’d be able to do it.” 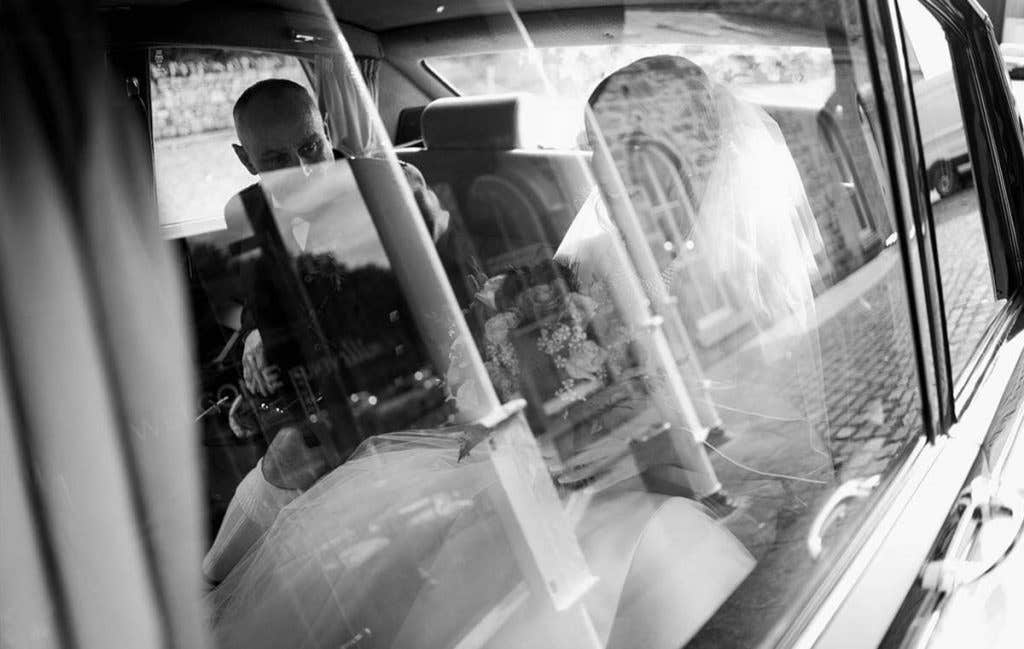 The couple went for an autumnal theme with wishing trees as centrepieces, tree logs to place the evening buffet on and a fairy light curtain. “Our four-tier cake had layers of lemon drizzle, chocolate orange and toffee,” says Sam. “It was covered in white and dark chocolate and had a rustic log-effect fondant round it.” 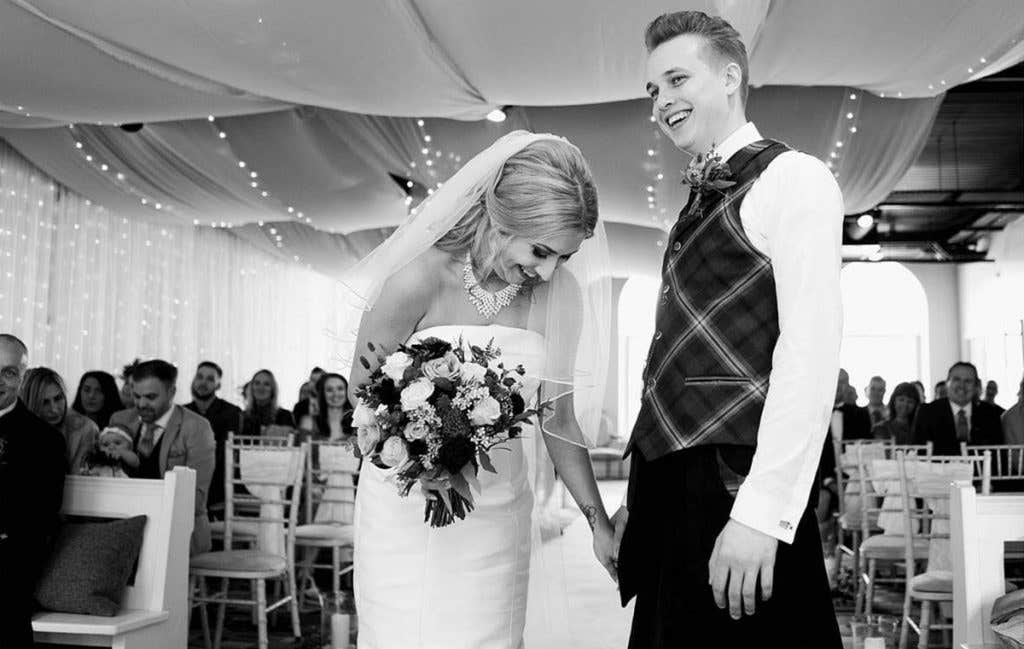 After dinner the evening guests arrived, then there was cake cutting and the first dance. “After this we all danced until around 9.30pm, when we stopped for hot rolls, chip cones and cake,” says Sam. “Then the dancing we continued until the early hours of the morning! Dancing around with friends and family was the most fun moment. My friends and I started a conga line and we managed to get 95% of our guests to join in. We ended up finishing at the sweetie cart, so everyone got a handful of sweeties at the end!” 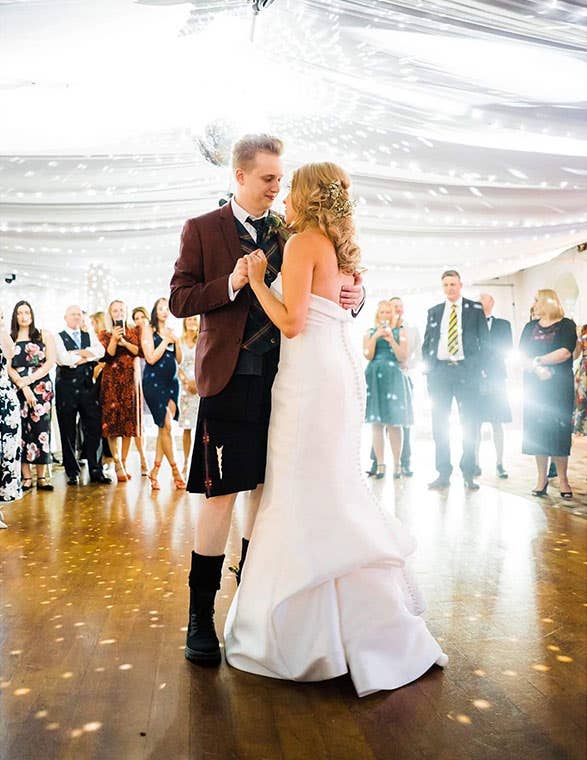 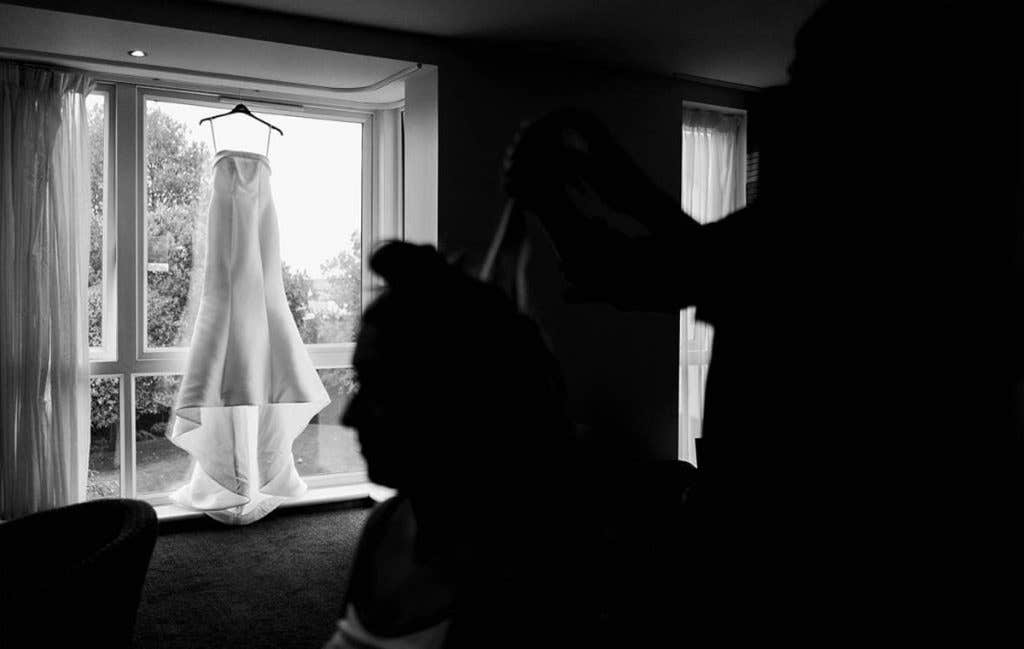 Did your wedding have the wow factor like our humanist wedding feature? If you would like your big day to be one of our real weddings send your favourite photo to info@wed2b.co.uk and we’ll be in touch!