Jurassic Park fans Peter and Jennifer picked the perfect location for their ceremony, under the T-rex at the Manchester Museum. Our WED2B Real Weddings in Manchester feature reveals more:

Jennifer and Peter met online after many years respectively of unsuccessful dating. “He runs his own business selling knives for outdoor pursuits, but also sells antique replica swords and armour (an interesting conversation on our first date!),” says Jennifer. “I’m a primary school teacher but I have a degree in Archaeology. On our fourth date, we walked past some people getting married at the football museum in Manchester. I said, ‘Did you know you can get married under the T-rex at Manchester Museum?’ and 18 months later we did!” 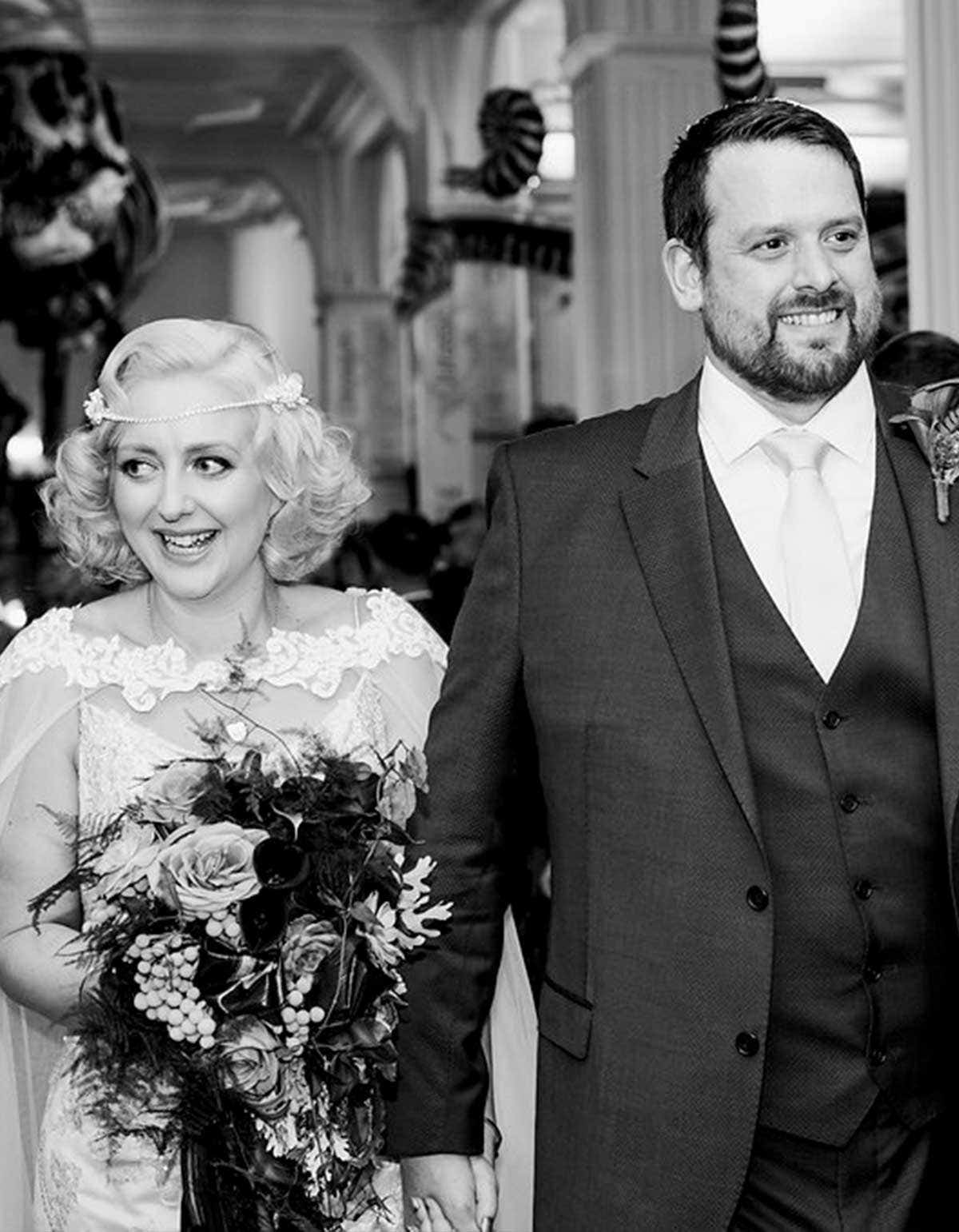 Jennifer went to WED2B's bridal store in Bolton and after trying on a grand total of eight dresses found her Cosmo. “It received the approval of all three bridesmaids, to the point where one of them refused to put it back on the rail until I bought it!" she says. "However, it wasn’t until I went back and put on the Faith headdress and Hadid cape that I found my perfect look."

For more inspiration on how to customise your bridal style, read about making your dress yours here. 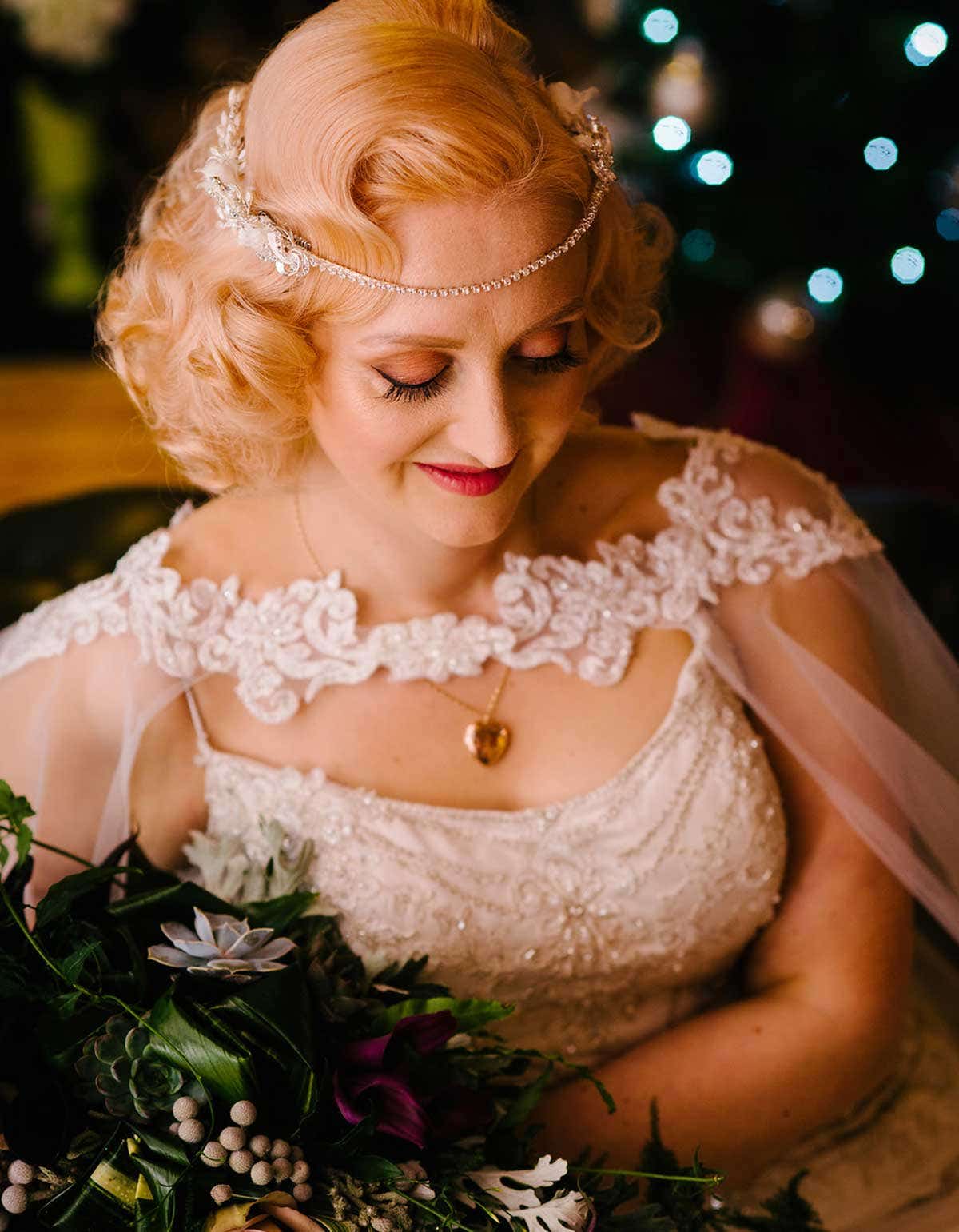 "I desperately wanted a cape but didn’t want to pay for a made-to-order one that didn’t match the dress," she says. "So I was overjoyed when WED2B released this cape. I knew I wanted a vintage style to match my hair and make-up and I felt like something out of A Midsummer Night’s Dream.”

Weddings in Manchester: A venue to remember

This real weddings in Manchester ceremony took place under Stan the T-rex at Manchester Museum. “I have an Archaeology degree and have worked in museums, so I love dinosaurs and we both love the movie Jurassic Park,” says Jennifer. “As soon as we saw it we knew we didn’t need to look anywhere else. We had the ceremony at 4 pm followed by a drinks reception in the Planets Gallery. Then we ate our wedding breakfast under a giant whale skeleton in the Living Worlds Gallery. It was amazing and the guests raved about it. The dark winter night also made it feel extra special.” 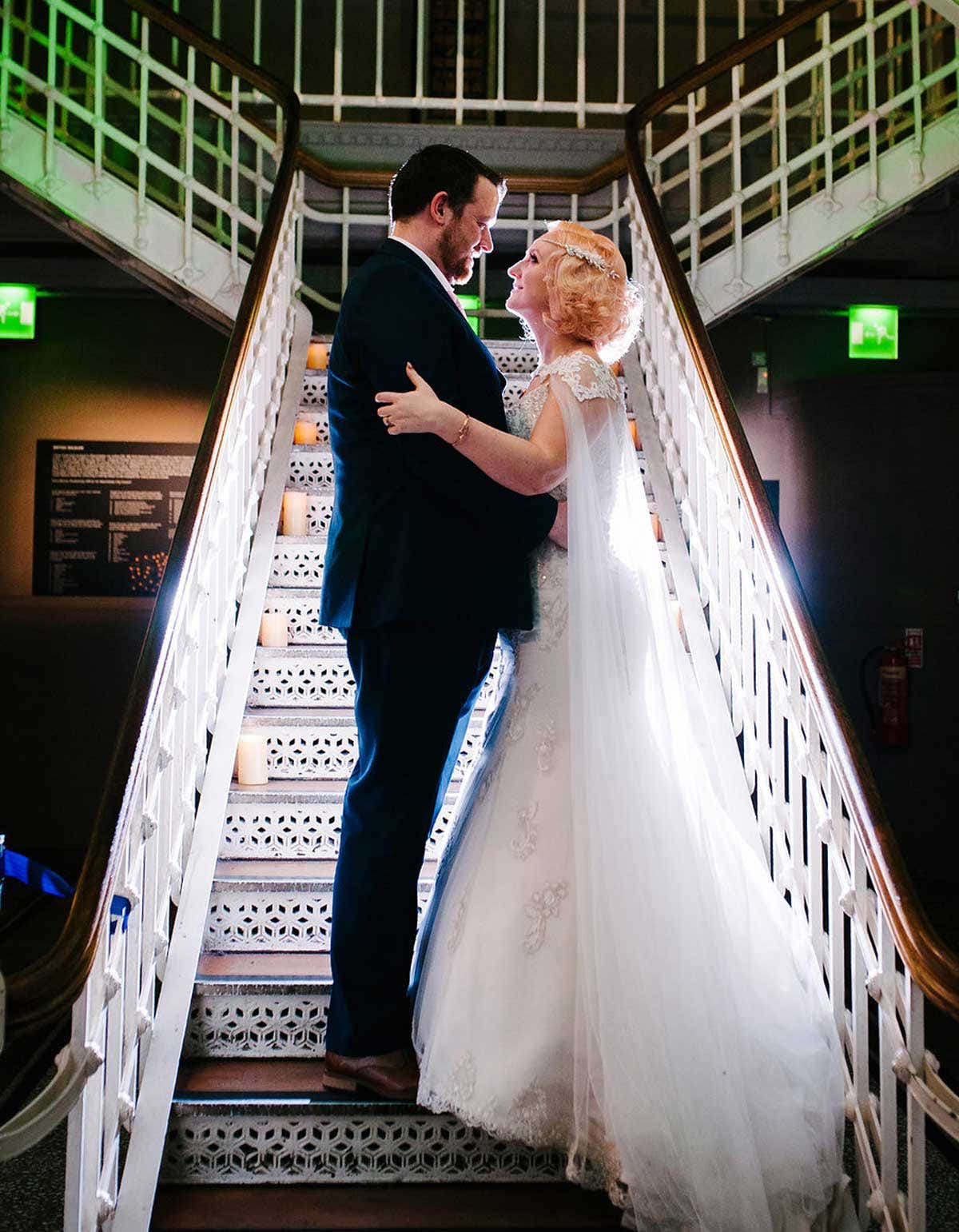 Jennifer’s Dad walked her down the aisle to the Jurassic Park theme tune. “I loved waiting with my bridesmaids and dad, while the string quartet played the song from the wedding in Love Actually,” says Jennifer. “When they stopped and we heard the first few notes of the Jurassic Park theme I got goosebumps! I also arrived in the Jurassic Park jeep. So after the ceremony, Peter and I spent 30 minutes in there drinking champagne.”

The dinosaur theme continued with the decorations. “I made silver illuminated dinosaur table centres and our flowers were ferns and ‘extinct’ types of plant,” says Jennifer. "I also had tiny magnetic dinosaurs holding the place cards." Tables were named after the dinosaur paddocks in the film and the table plan was a map of Jurassic Park. There were also three cakes; a cheese tower, a pork pie tower and a sponge cake tower. These were all decorated with fruit and leaves and tiny sparkly dinosaurs. In the evening there was a live band all wearing T-shirts that made them look as if they were employees at the park!

“Don’t worry if people are having a good time, they are!” says Jennifer. “If you plan what makes you happy, everyone else will be happy too.”

Did your wedding have the wow factor like our Real Weddings in Manchester feature? If you would like to be a part of our real weddings feature to send your favourite photo to info@wed2b.co.uk and we’ll be in touch!

Wedding Dresses, Designer Anna Sorrano & Brides' Stories
We use cookies on our website to make your experience better. You can click here to update your settings. Otherwise, we'll assume you're OK to continue.