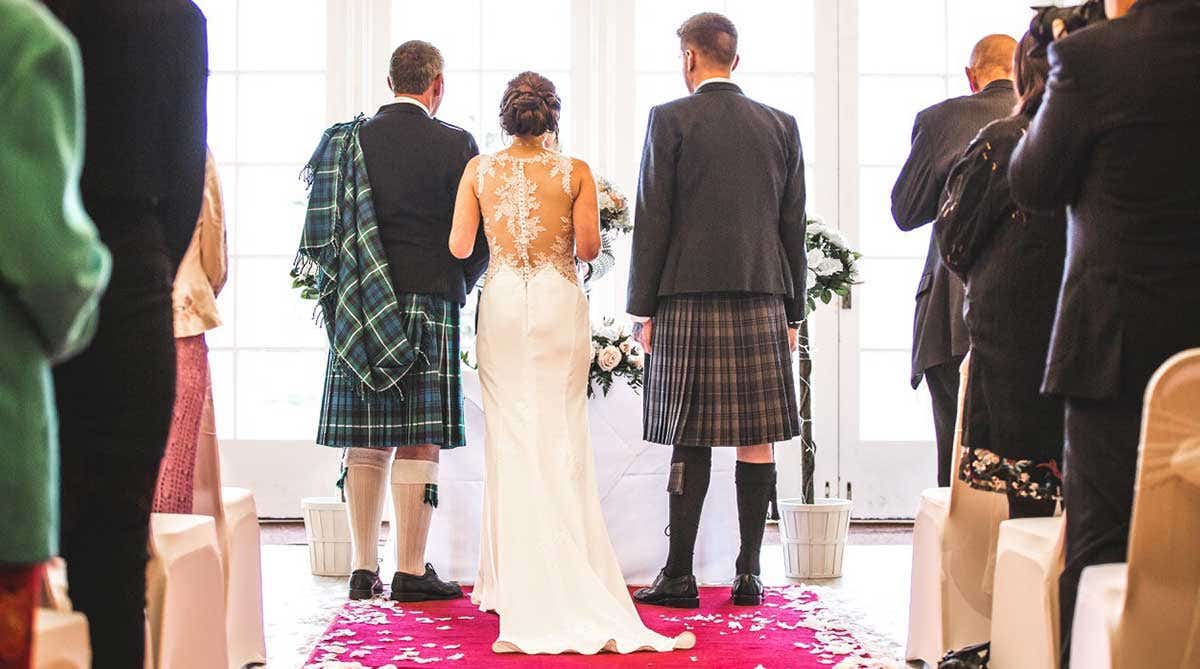 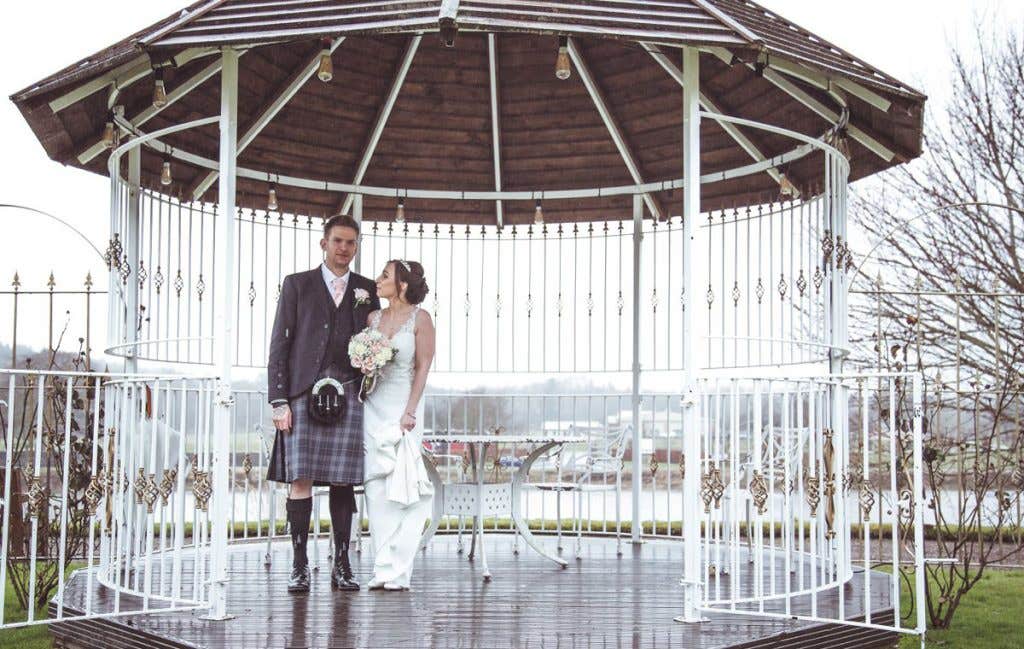 Richard was on a lads’ holiday a few years ago while Nikki was bored and flicking through Instagram at work. “I saw him in a picture that someone I knew had posted,” she says. “So I added him and messaged him. The next day he flew home and we went on a date that night to a Nando’s in Edinburgh.” 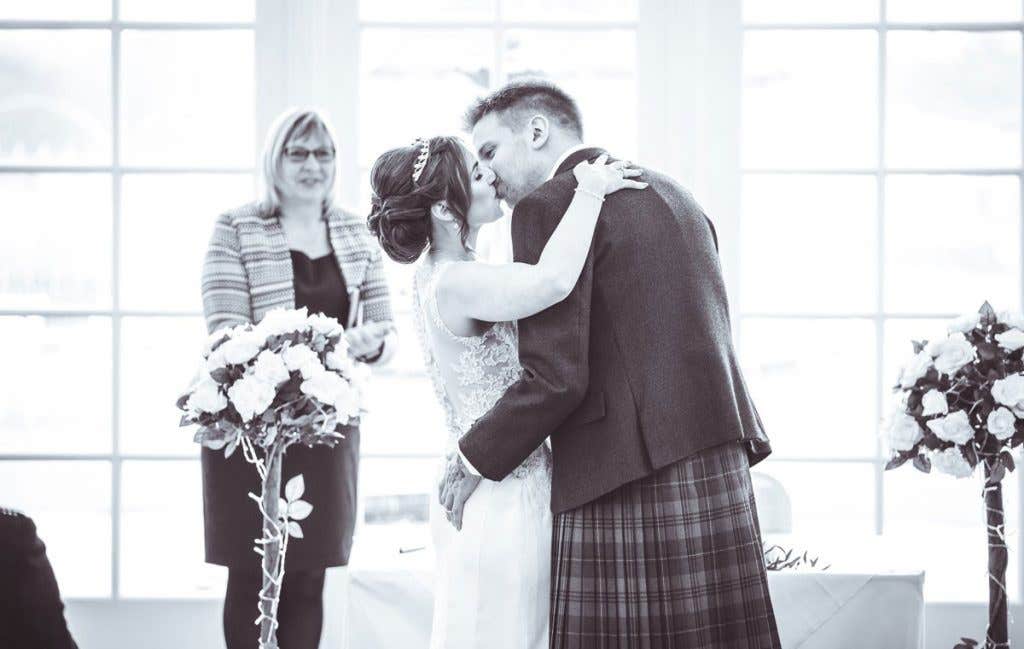 The couple’s son was six weeks’ old when Richard asked Nikki to marry him. “It was five days before Christmas and all three of us were ill in bed one night,” she says. “Richard said Charlie (our son) had an early present for me and handed me a Pandora bag. I opened the bag and then the Pandora box and the ring fell out. I was very surprised! We had discussed getting married loads, so I knew it was going to happen, although I wasn’t expecting it right then. It was the 20th December 2017 and we got married just 11 weeks later.” 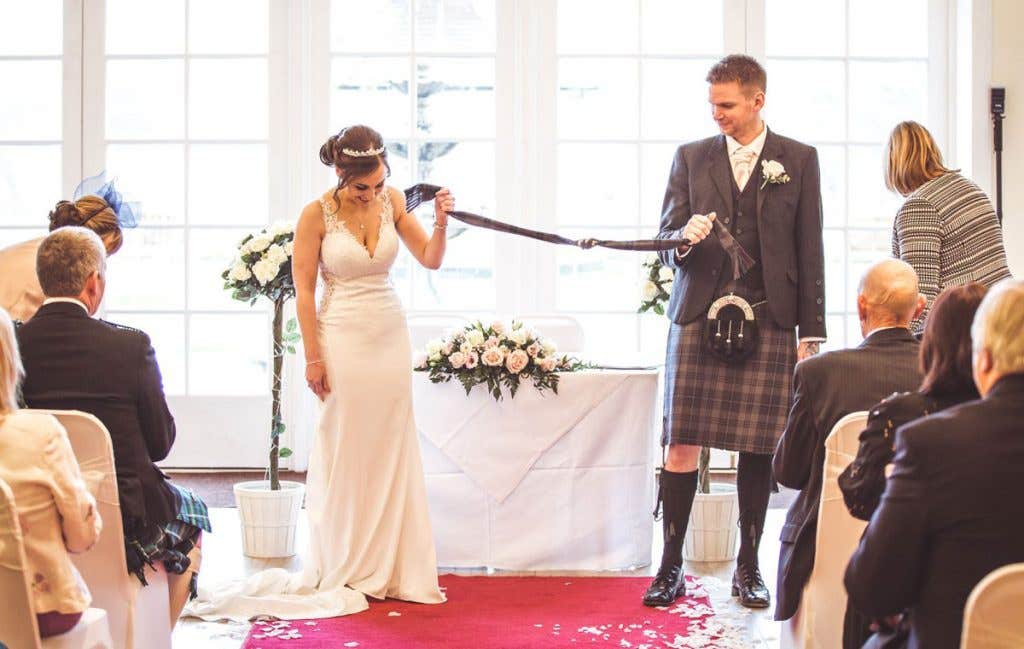 Nikki wasted no time and headed to WED2B the very next day. “My store experience was amazing, the staff couldn’t have been any more helpful and the store manager was great and made me feel so comfortable,” she says. “I fell in love with Leona immediately. Although it hadn't been long since I’d had a baby it gave me an amazing figure. It made my stomach look slim, my back look long and my boobs look really good.” She also added a gorgeous tiara. “As soon as I tried it on I felt like a princess and my little boy's face lit up because it was so sparkly. It made me feel like he loved it too.” 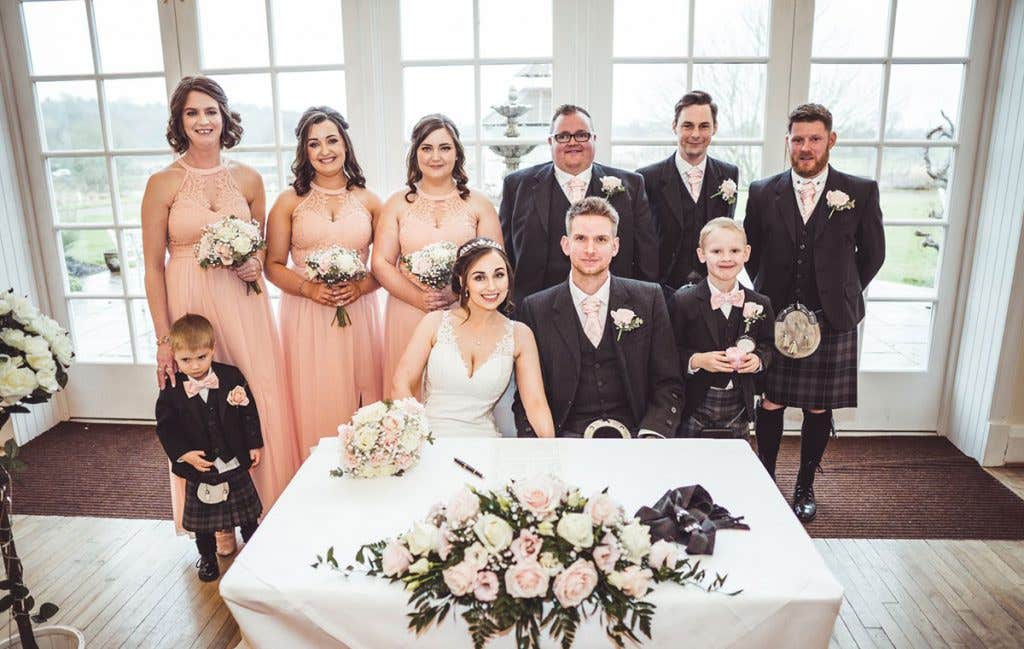 The couple chose Ednam House in Kelso in the Scottish Borders for the wedding in March 2018. “Richard and I had always liked this venue, even before we met, so we both chose it without any doubt,” says Nikki. “It has a gorgeous setting overlooking the River Tweed with lovely gardens too.” 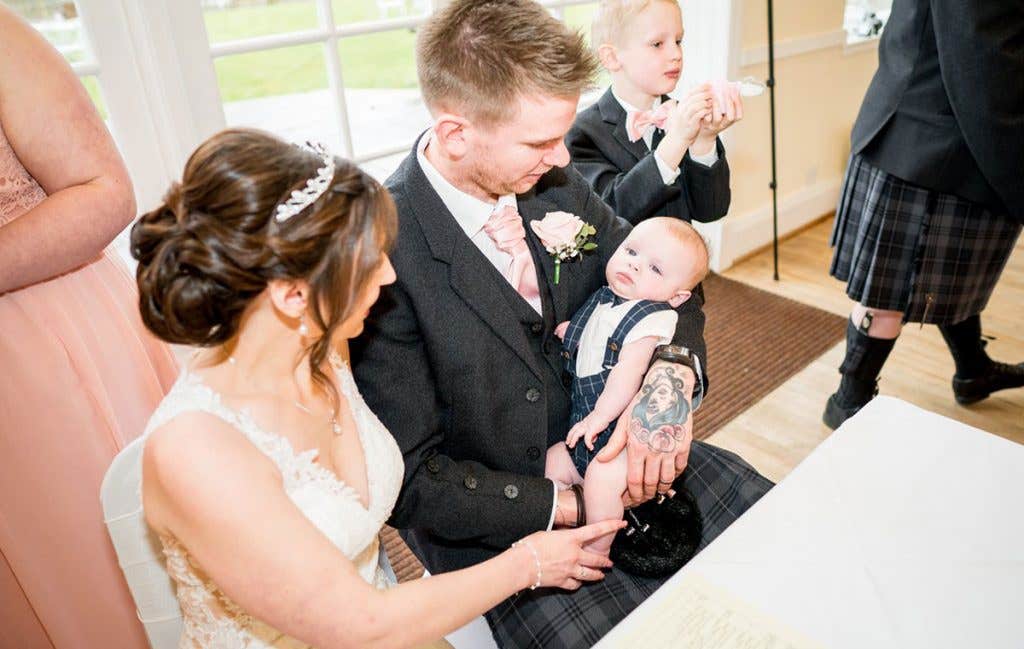 The ceremony was held in the venue’s large ballroom, which has glass doors overlooking the gardens and the river. “We had a piper and he played the guests in and then played me down the aisle,” says Nikki. “We both chose our own vows and had the Celtic tradition of handfasting, which involved binding our hands together. My favourite memory was when Richard saw me walking down the aisle and his eyes filled up. He just looked so lovingly at me.” 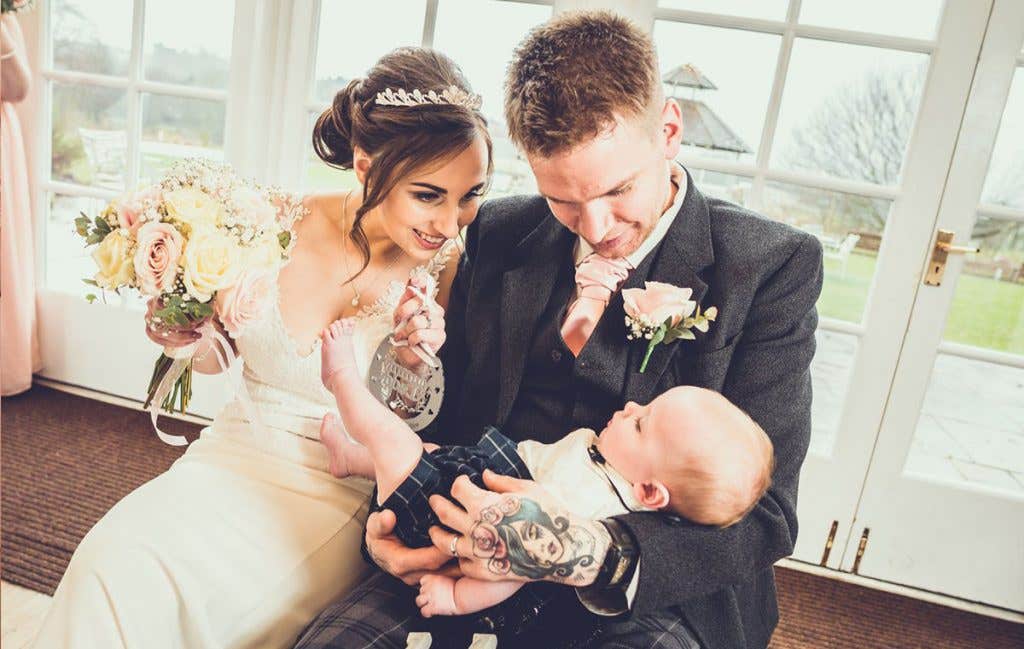 After the ceremony there were photos, nibbles and drinks before the main dinner. This was followed by a ceilidh band and disco in the evening, along with bacon and sausage rolls to keep everyone going. The couple danced their first dance to ‘I Won’t Give Up’ by Jason Mraz. 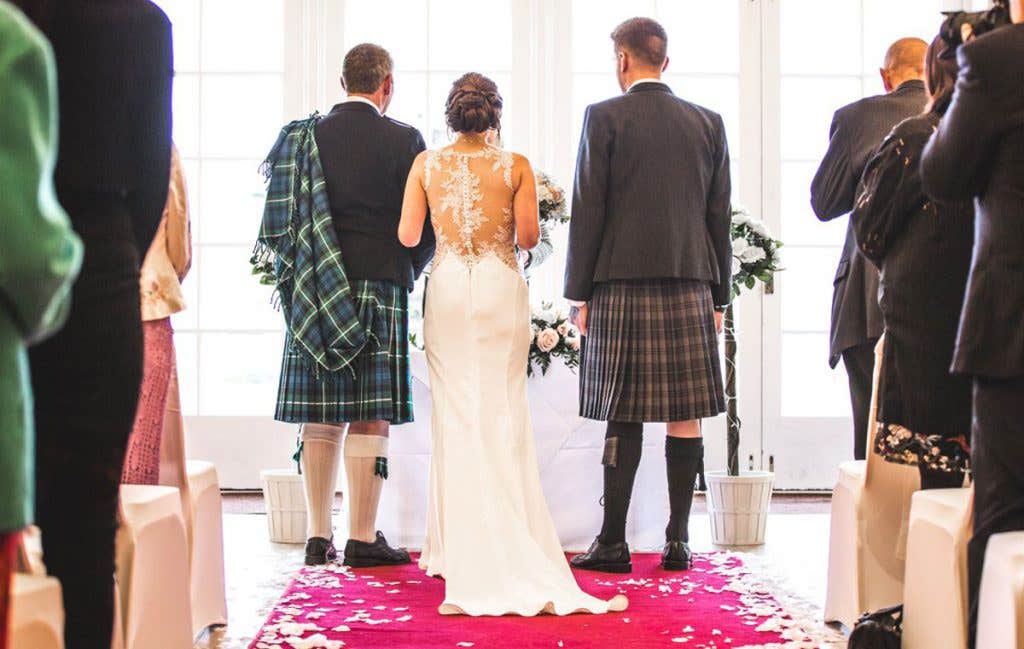 “The whole day was so overwhelming,” says Nikki. “I felt like a princess. Everything came together perfectly and everyone that we cared for was there to spend it with us. The only thing I would change was the weather! It was pouring with rain, but what can you expect in Scotland. It was an amazing day and apart from that I wouldn't change a thing!”

Did your wedding have the wow factor like our Real Weddings Scotland feature? If you would like to be a part of our real weddings feature send your favourite photo to info@wed2b.co.uk and we’ll be in touch!