If you’re getting married abroad and need inspiration you’ll love Georgina and Scott’s beautiful beach wedding in sunny Mexico. Our WED2B Real Weddings feature reveals more… Georgina and Scott met at a local care home where they were both working...

Georgina and Scott met at a local care home where they were both working. “We instantly gelled,” says Georgina. “We had some unforgettable laughs and I knew he was special, I just didn’t realise how special yet! When I moved on to a new job we had less contact until we started speaking via social media. I was absolutely chuffed to be in touch again and, as time went on, Scott asked me on a date. I’d never been on a date before, but I was definitely going on this one! He took me to a beautiful restaurant for dinner and drinks and then we went back for coffee. I just couldn’t get enough of him!” 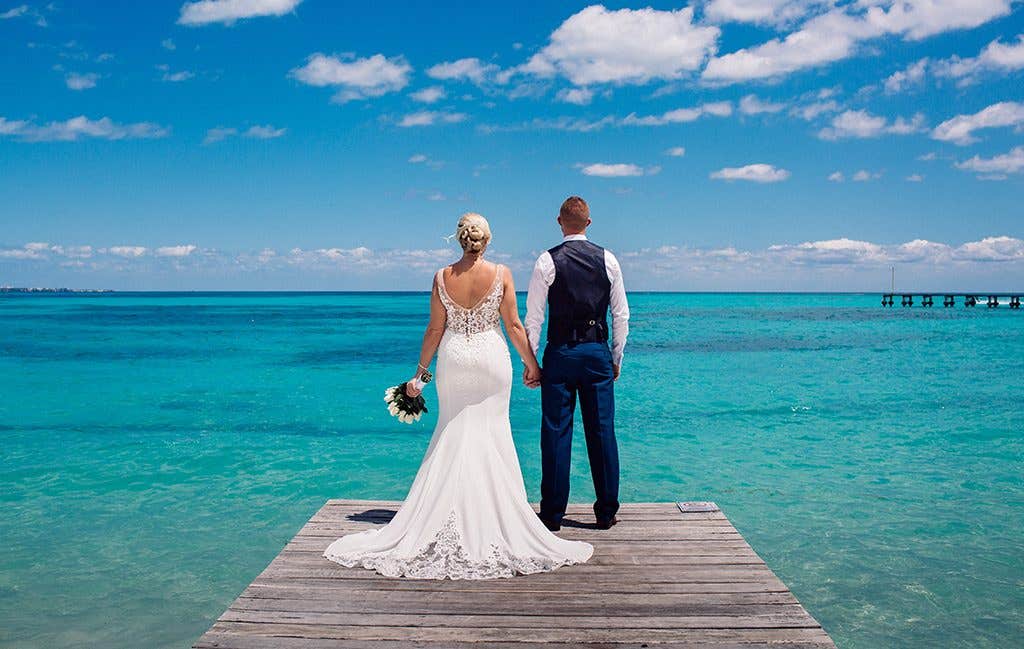 “We were on holiday in Salou, in Spain, and decided to visit Barcelona for the day,” says Georgina. “While we were there we hiked up a mountain to see the views at the top. Before we set off, Scott tied a hoody around his waist and I went on and on at him that he wouldn’t need it. It was a boiling day! Scott insisted he might feel the cold at the top but, little did I know, that the ring was in the pocket! We reached the top and it was breathtaking. I turned away from Scott to admire the views and when I turned back he was down on one knee, asking me to marry him! I couldn’t believe it, it was so emotional. It was the 24th July 2017, Scott’s birthday, which made it even more special.” 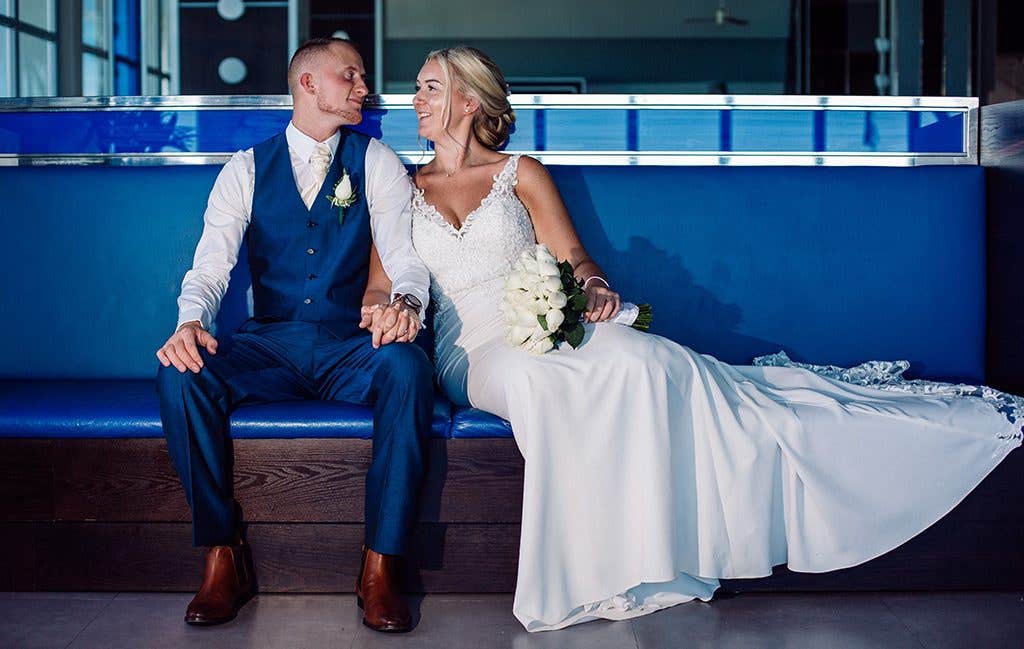 Georgina found her dress at WED2B’s Shirley store. "The variety of dresses was amazing,” she says. “The whole experience just blew me away. The staff were friendly, accommodating and so happy to celebrate when I did find my dress. I chose Sawyer and I loved it as soon as I set eyes on it. I loved the detail and the back of the dress was the winner for me. When I tried it on I just wanted to keep it on, so this was definitely The One!” 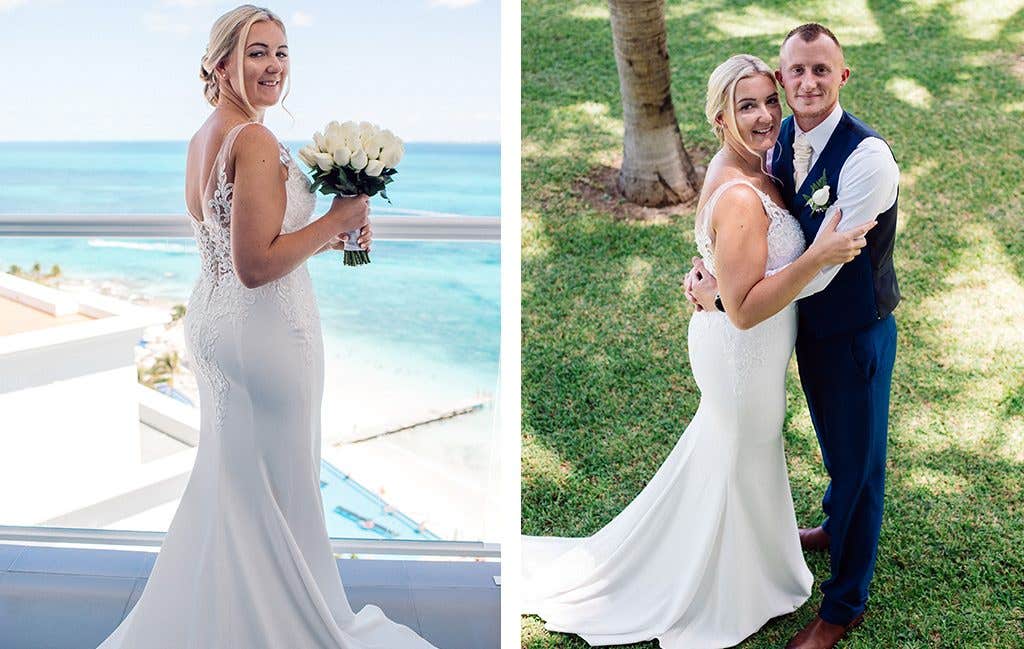 The couple chose Mexico for their big day. “Our hotel, Riu Cancun, was incredible and we were over the moon with the whole venue,” says Georgina. “Getting married abroad was something I’d always wanted, however, Scott was keen on a traditional church wedding. After much convincing Scott came round and we chose Mexico.” 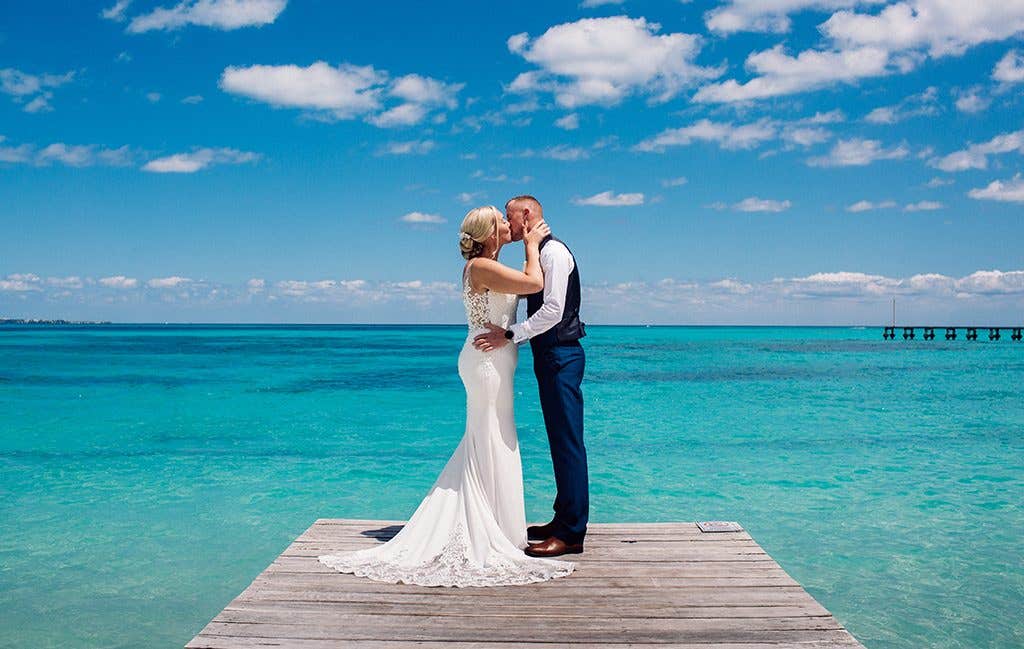 The couple married by the beach on 23rd March 2019. “It was perfect,” says Georgina. “I walked down the aisle, arm in arm with my father, to Ed Sheeran’s ‘Perfect’. I still feel emotional hearing this nearly a year on. It was one of Mexico’s hottest days and at 12 midday it was over 30 degrees! After the ceremony we had time with our wonderful photographer and then went sailing on a private yacht, where we enjoyed a BBQ and drinks while watching the sunset. It was all perfect and couldn’t have gone any better.”

“Our wedding cake, a beautiful two-tier, white-iced sponge, featured a tribute to our two special pets at home,” says Georgina. “After the delicious meal we gave wedding gifts to our family and  also to each other. Scott got me a personalised story book of our journey. We laughed and laughed, it was priceless! The funniest moment was during our wedding vows though, when the priest kept calling Scott, ‘Mr Goode’. We laugh about it to this day!” 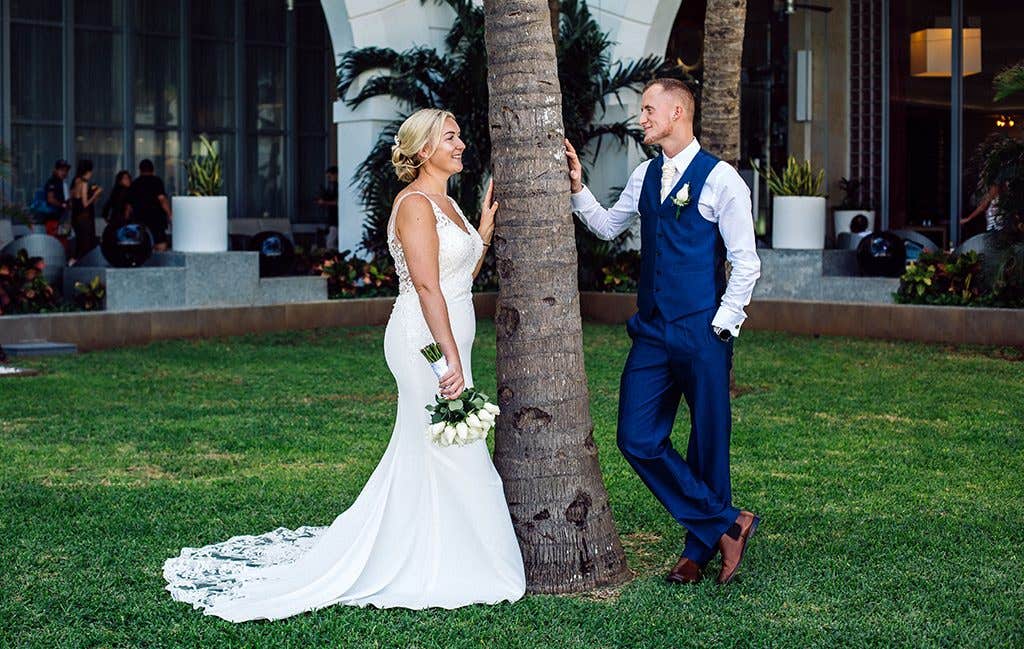 “My one bit of advice would be not to stress,” says Georgina. “Not everything will go to plan (that’s very normal) but just go with it and smile. Most importantly, spend two minutes of every hour of the big day with your husband. Try to take it all in because, believe me, the best day of your life absolutely flies by!”

“The hotel and wedding department at Riu Cancun (riu.com/en/hotel/mexico) were unreal. I had my hair and makeup done by the salon at the hotel too, which was fantastic,” says Georgina. “We arranged the florist when we were in Mexico and the displays were so lovely that I took some home and had them preserved in a glass mould. We found our photographer online, via social media, in Mexico, and he was fantastic too. He took great photos and was such a nice person to have at our day. We still keep in touch now.”

If you're getting married abroad and would like your big day to be one of our real weddings please click here to share your story and photos with us and we’ll be in touch.