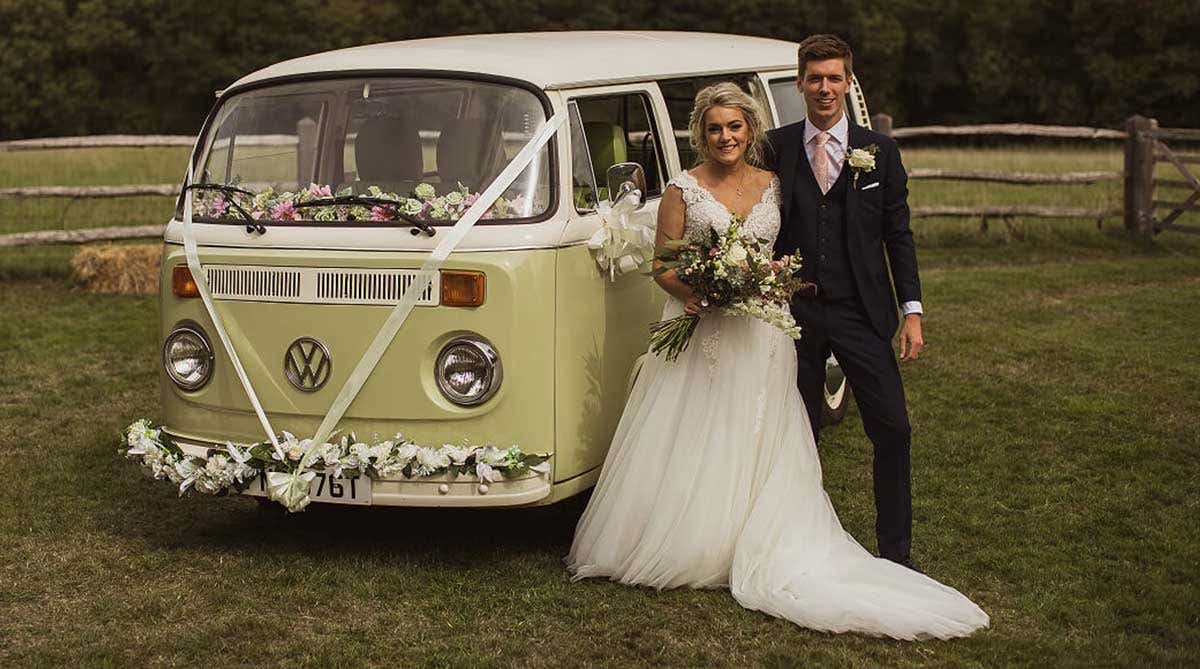 This happy couple celebrated with a barn wedding in a picturesque part of Surrey. Our WED2B Real Weddings feature reveals more:

Christine and Gary first met at a festival in August 2013. “We had mutual friends who met up to watch the same band and we got talking at the bar,” says Christine. “After watching some bands together we then exchanged numbers to meet up again. We went to a pub for our first date about a week after we met, and then Gary’s friends turned up!” 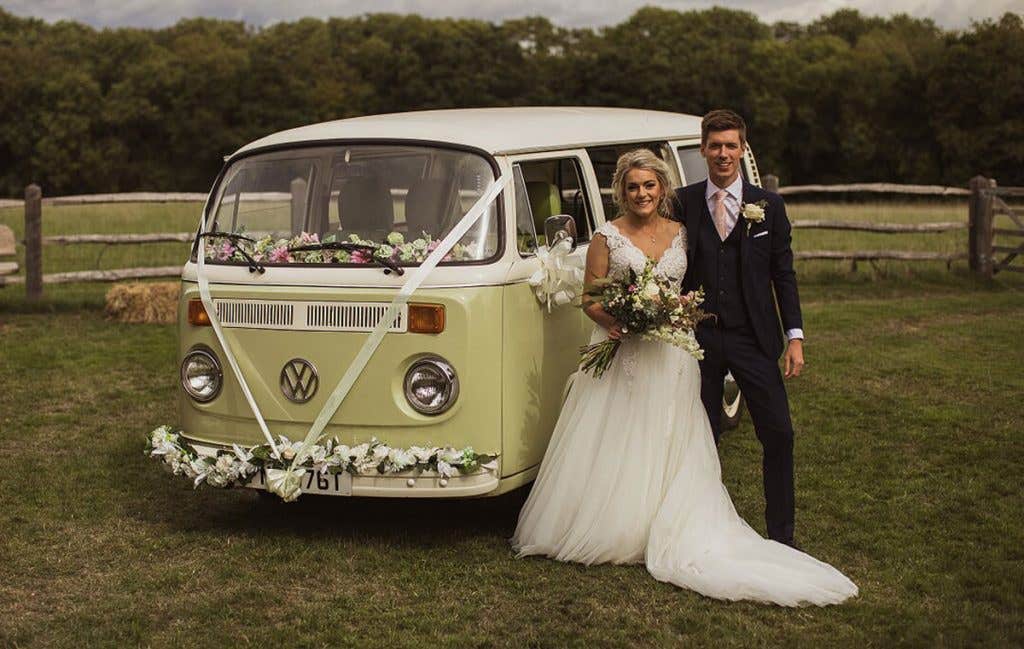 A delay in proposing…

“One evening Gary was working late in London and I drove to view a flat, which we would later purchase, with our four-month-old son Oliver,” says Christine. “Unfortunately, I was involved in a bad car accident, where I had to climb out the window and get Oliver out of the car. I immediately called Gary and told him that he would need to leave work and come and get us. It was then that he said, ‘I’m round the corner with your Dad, don’t ask why’. Later on, he told me that he’d been asking my Dad for permission, as he was planning on proposing in a couple of weeks. This obviously delayed it and, even though I knew it was coming, I had to wait. He was adamant it should still be a surprise!” 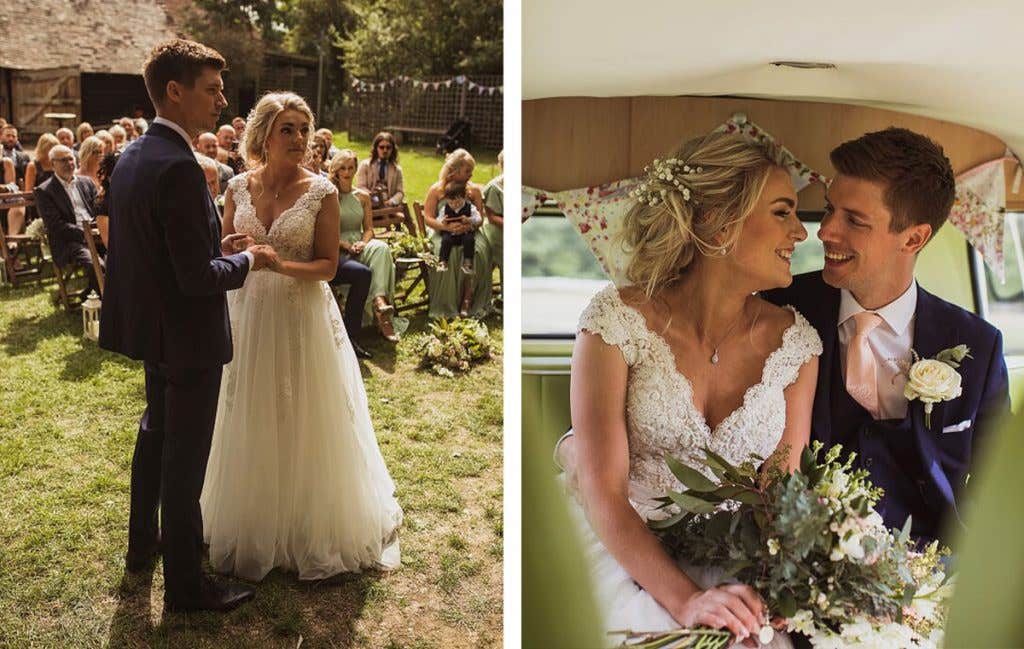 The actual date of the proposal was 5th October 2016. “I’d been to the cinema with his Mum and came home at around midnight,” says Christine. “Gary had lit around 200 candles, and had kept Oliver awake. He was wearing a baby-gro that said, ‘Will you marry my Daddy?’. Of course, I said yes!” 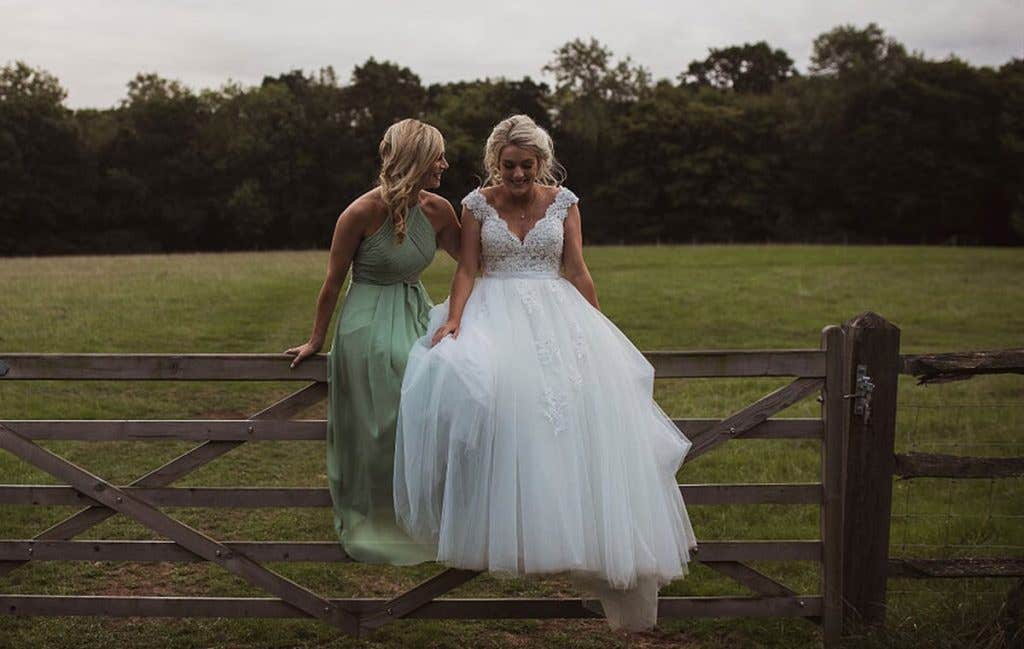 Christine bought her dress from WED2B’s Surbiton store in November 2017. “The dress I purchased was Kendra by Viva Bride,” says Christine. “I saw it online and knew it was the dress for me. I didn’t try on any others, as I fell in love with it straight away. My store experience was amazing. The staff were fab and not too pushy to purchase.” 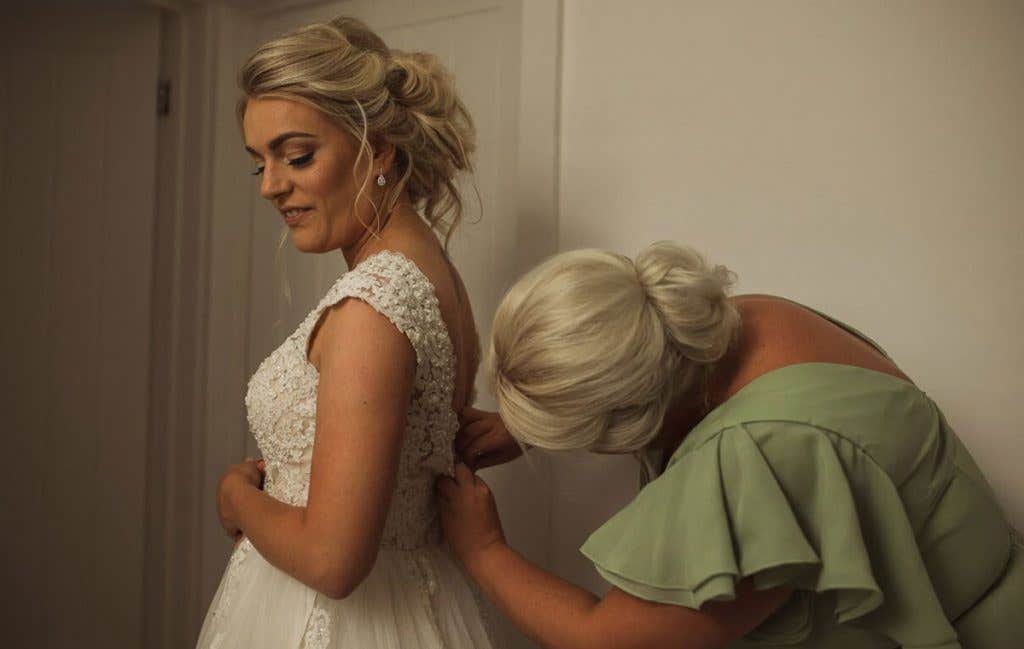 The couple married at Gildings Barn in Newdigate, Dorking. “This was the first venue we saw and we knew straight away it was the one for us,” says Christine. “We wanted a barn wedding venue, and did a lot of online research. Gildings Barn was perfect. It’s set on a working farm, so it’s still filled with all the traditional farming equipment, which really added a special rustic touch. The staff at the venue were amazing too, so helpful and supportive of everything we asked. We got married on 24th August 2018, five years to the day from the day we met.” 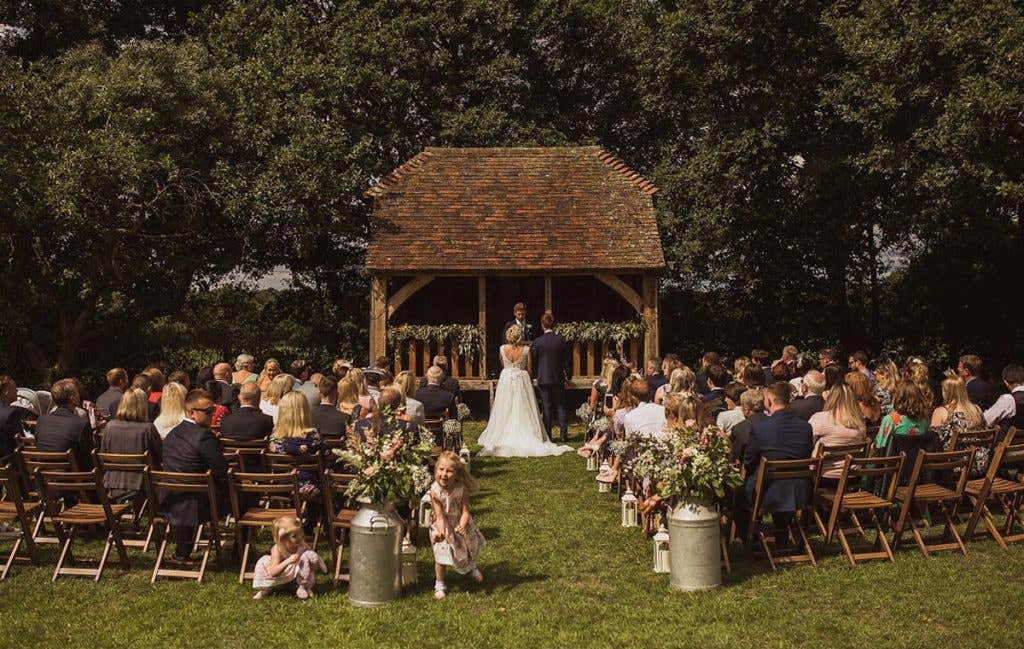 Christine arrived in a green vintage VW camper van. “My Dad walked me down the aisle to ‘Here Comes the Sun’ by The Beatles,” says Christine. “When we booked the barn wedding venue it wasn’t licensed for legal ceremonies, so we were legally married a couple of days before. Due to this, my brother-in-law performed the ceremony for us. He wrote his own wording, but still followed the traditional structure. This made our ceremony so personal and so special for us both. My sister also gave a reading. She read a poem that her mother-in-law had written for her own wedding. It was beautiful and the perfect reading to have on our special day.” 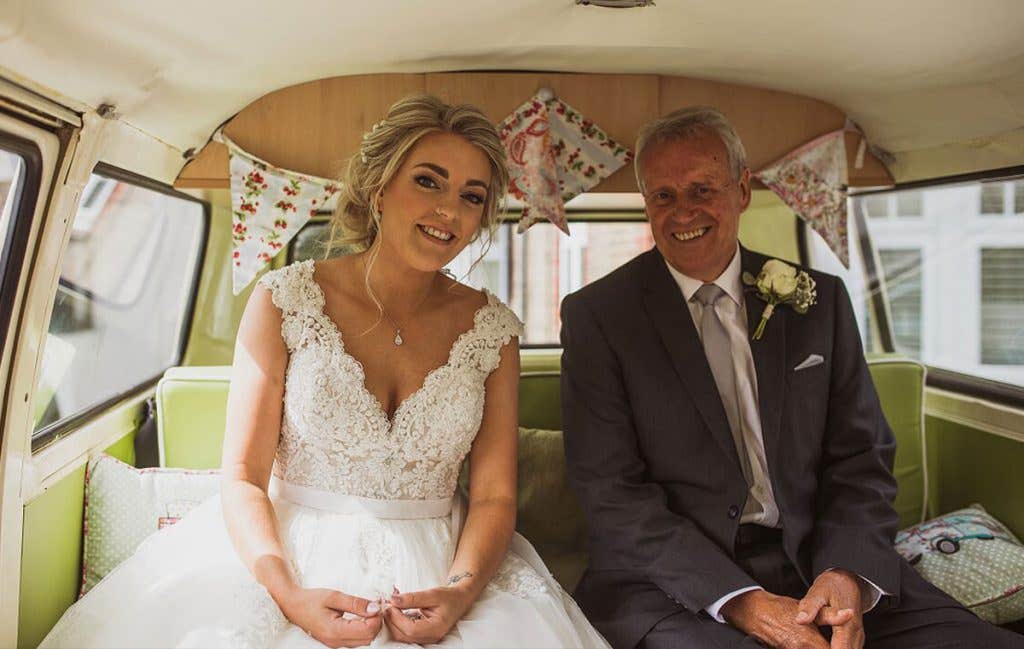 After the ceremony there were bubbles instead of confetti. “We didn’t want to have to clear up confetti the next day and this produced some amazing photos!” says Christine. “We then had photos and drinks while the garden games were out and the children could play and run around in the garden.” 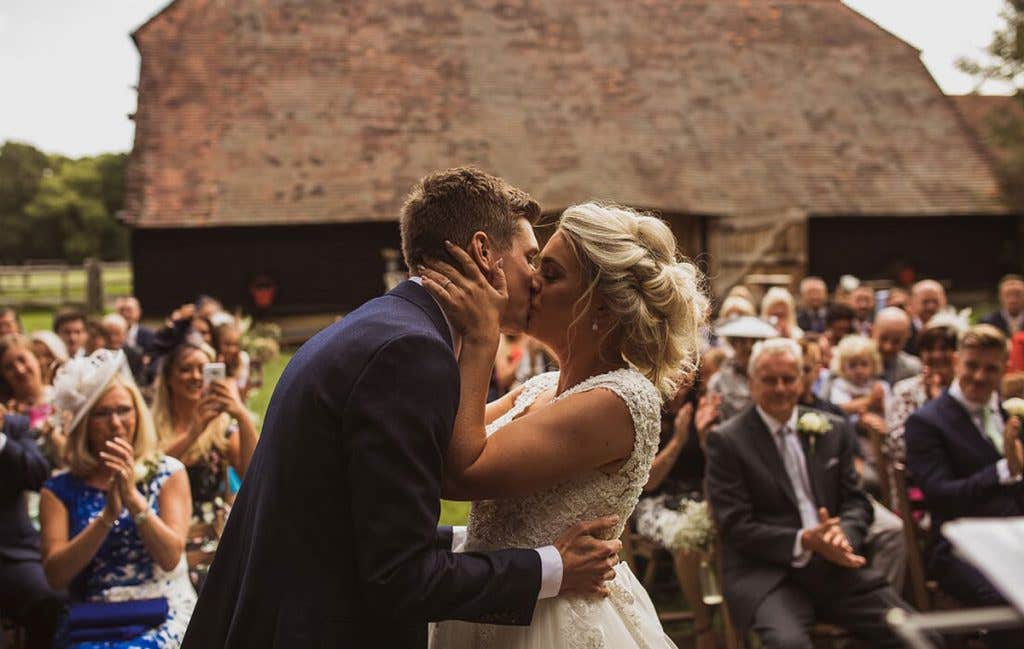 Christine bought some of the decorations herself but also hired a lot from Fairly Vintage. “They have a huge array of products and will even style your venue for you if you want,” says Christine. “We chose some select items, which really brought out the vintage styling of the rustic barn wedding venue. An old colleague of mine made our cake. It was a huge, three-tiered semi-naked cake, dressed with flowers from our florist. I also had to have one small Harry Potter touch with my cake topper!” 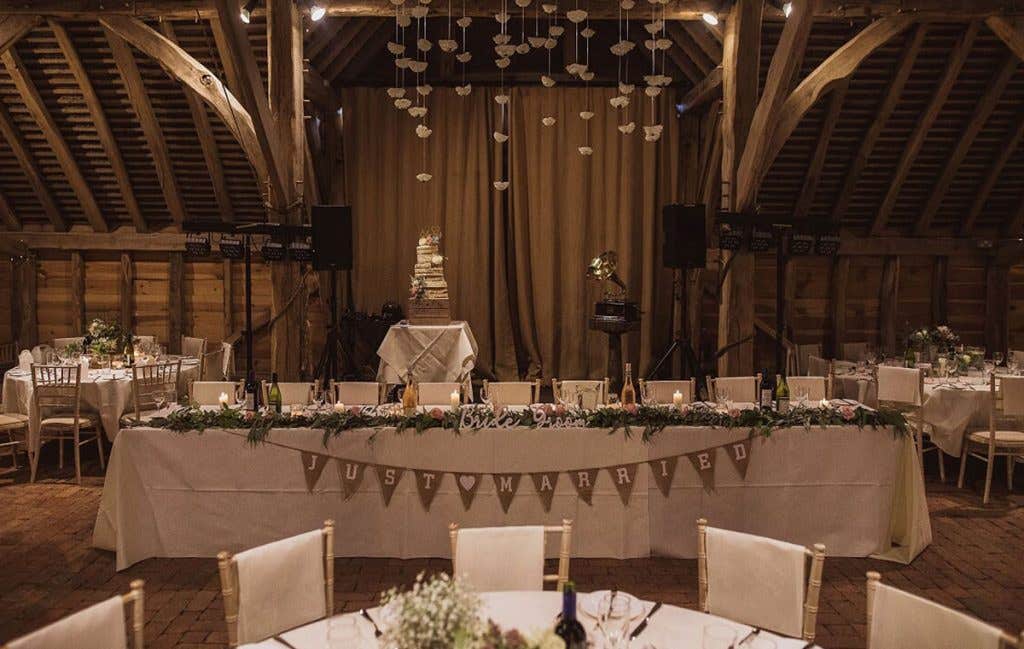 Dinner was a sit-down meal with some speeches before and some after dessert. Then there was time to mingle before the cutting of the cake and the first dance. “We didn’t have a DJ or a band, as my husband is quite particular about his music choices,” says Christine. “So his only job was the playlist, which was timed to the minute!”

In the evening there was a sweetie cart, as well as bacon and sausage rolls to keep everyone going. And, despite a little rain in the evening, the newlyweds still managed a sparkler send off. “Our best man was incredible on the day,” says Christine. “I’d asked so much of him and he really stepped up to the plate. He added some funny touches, like rounding the guests up for dinner by introducing himself on the microphone like he was a boxing host! Our son also spent the entirety of my Father’s speech, cheering, shouting and clapping, which kind of took away my Father’s glory, but was highly entertaining! I loved every second of it, but it went way too fast!” 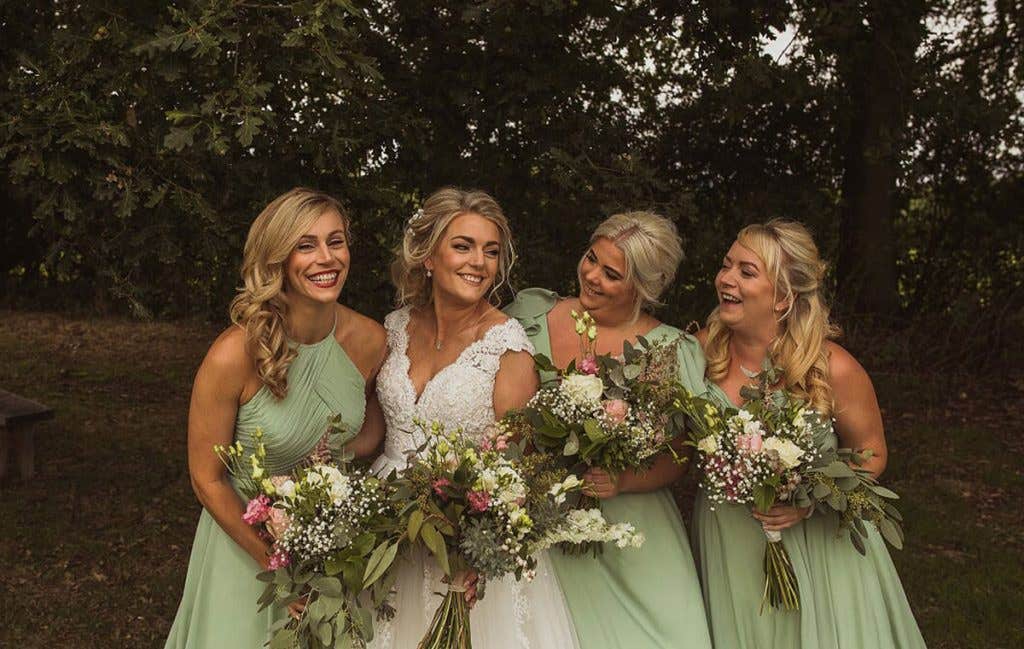 Did your wedding have the wow factor like our barn wedding feature? If you would like to be a part of our real weddings feature send your favourite photo to info@wed2b.co.uk and we’ll be in touch!