A trendy warehouse vibe was the order of the day for this cool London wedding. Our WED2B Real Weddings feature reveals more: Georgina and Toby met at London’s Proud Camden nightclub. “Toby was the lead singer in a band and...

A trendy warehouse vibe was the order of the day for this cool London wedding. Our WED2B Real Weddings feature reveals more:

Georgina and Toby met at London’s Proud Camden nightclub. “Toby was the lead singer in a band and some mutual work friends took me along to see them perform,” says Georgina. “I was very impressed! We went on our first date that same week to Winter Wonderland in Hyde Park. We went with the same people, as I begged them all to come too. I was too nervous to meet him on my own!” 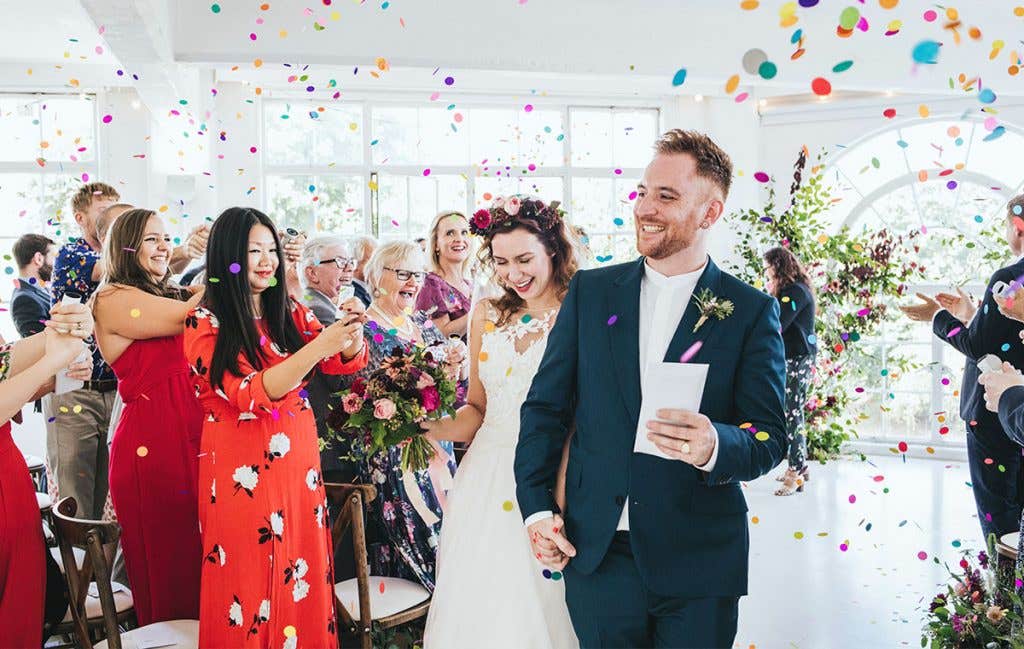 Toby proposed in Paris in August 2017. “I’m half French and completely in love with the Eiffel Tower, I could just sit there and stare at it for hours,” says Georgina. “He took me to the Trocadero and proposed on a park bench overlooking the tower, so we now have our own bench we can go and revisit. I was hopeful he’d do it in Paris but still extremely surprised. He’d also spent months designing and commissioning the ring and I had no idea!”

Later, while visiting a friend, Georgina stayed in a hotel near WED2B’s Camberley store. “I saw that there were no appointments needed and I thought how refreshing that was, compared to some of the more intimidating bridal boutiques,” says Georgina. “I didn’t go in that day, but it was always at the back of my mind. When I went online a few months later I saw so many WED2B dresses I loved, all at amazing prices. So, I put together a list of ones to try and my Mum and I went to the Surbiton store in February  2018. We got a parking space right in front of the shop door and I said, ‘It’s a sign!’” 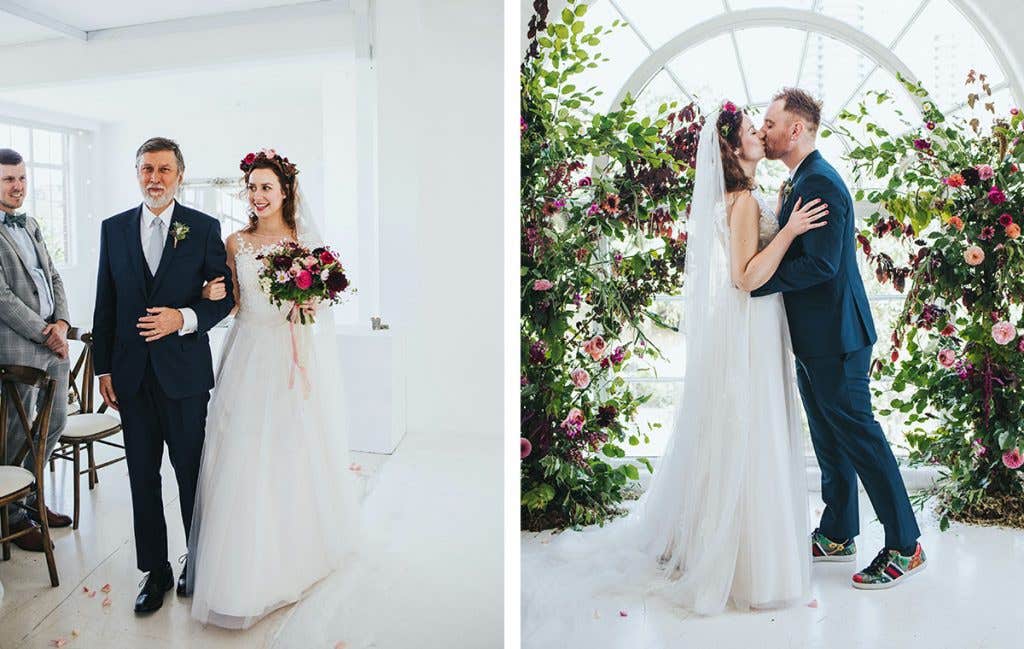 “It was quiet and I was seen to immediately, so I was trying on dresses within 10 minutes of arrival,” says Georgina. “Hannah, our assistant, was super helpful but not pushy, and found styles I hadn’t considered. She also made sure I had most of my top choices to try on. Everything was very calm, I had a huge private dressing room and Hannah all to myself. I also felt like I could take my time, unlike other bridal boutiques where you have hourly slots. My Mum also thought it was fab!" 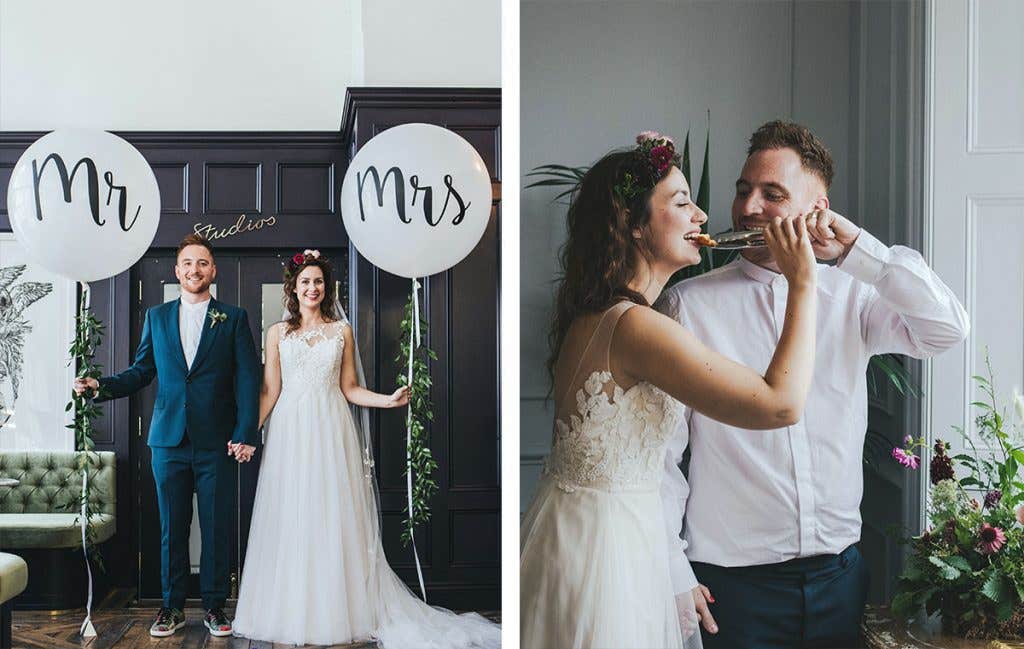 “The first dress I tried was very princessy and I loved it, but we agreed it wouldn’t match the venue style, which had a London wedding, warehouse/studio vibe,” says Georgina. “The second one I tried on was Billie, and I instantly loved it. It was more poufy than it looked online and had a slightly blush tinge to it. It fell really nicely and was so unique, with the asymmetric lace foliage climbing around the bodice. I also like that it was demure but had a sexy back! At this point Mum and I were still being cautious and saying stuff like, ‘just looking, just trying some on,’ but I think I knew!” 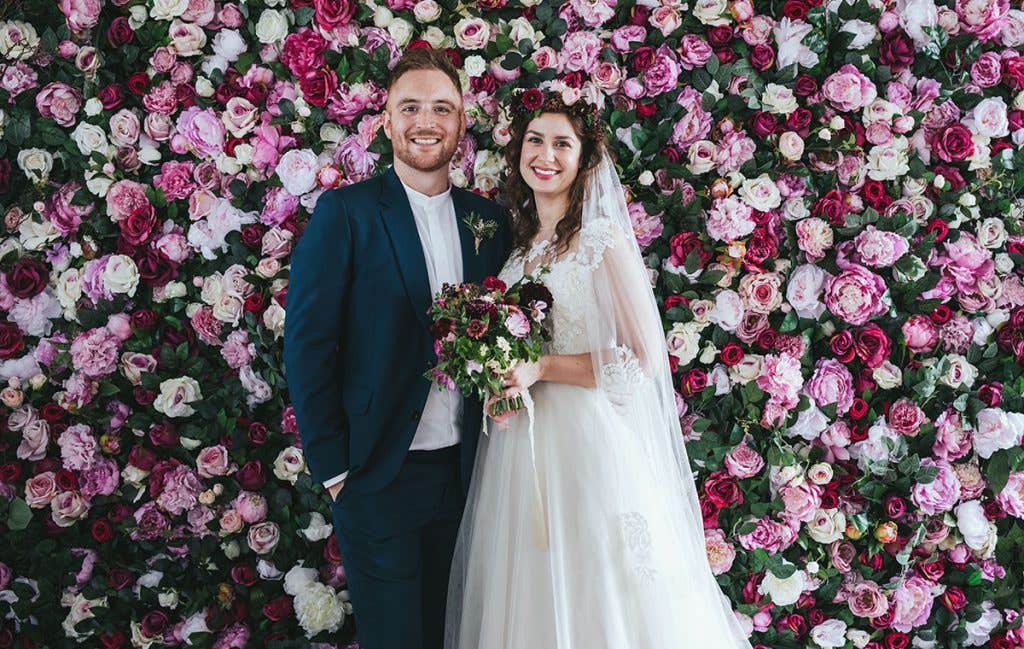 Georgina also bought a WED2B veil for her London wedding. “I hadn’t even considered a veil, as I wanted quite a modern look, but Hannah said they had a veil in the same collection. When I tried it on it completed the look perfectly. So, I went from no veil to quite a romantic, mantilla-style, trailing cathedral veil in five-seconds! For me Billie was the one but the veil was the absolute star of my wedding day." 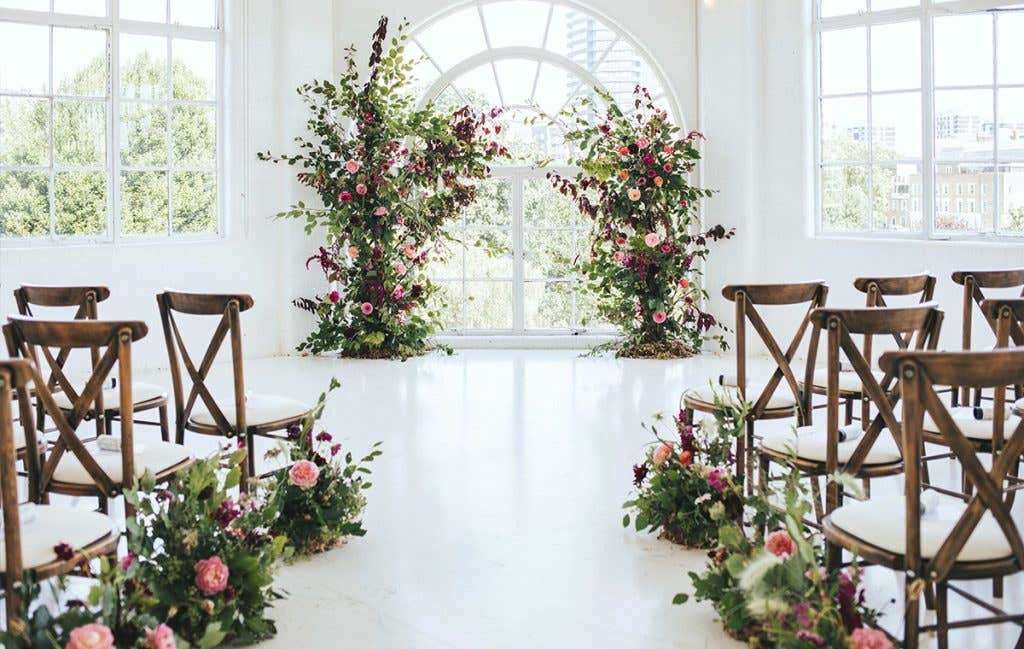 Toby is a cameraman and knew about a big old building that was once a hat factory and is now used as a film studio. “It’s called Wimborne House in Shoreditch,” says Georgina. “We went to see it and decided there and then it was the one for our London wedding. The light is incredible and they have tons of vintage props, such as velvet sofas. We also had access to the whole building, so the ceremony was held on one floor, followed by drinks on the rooftop and then dinner and speeches were on the floor below. The evening ended with a disco in the basement!” 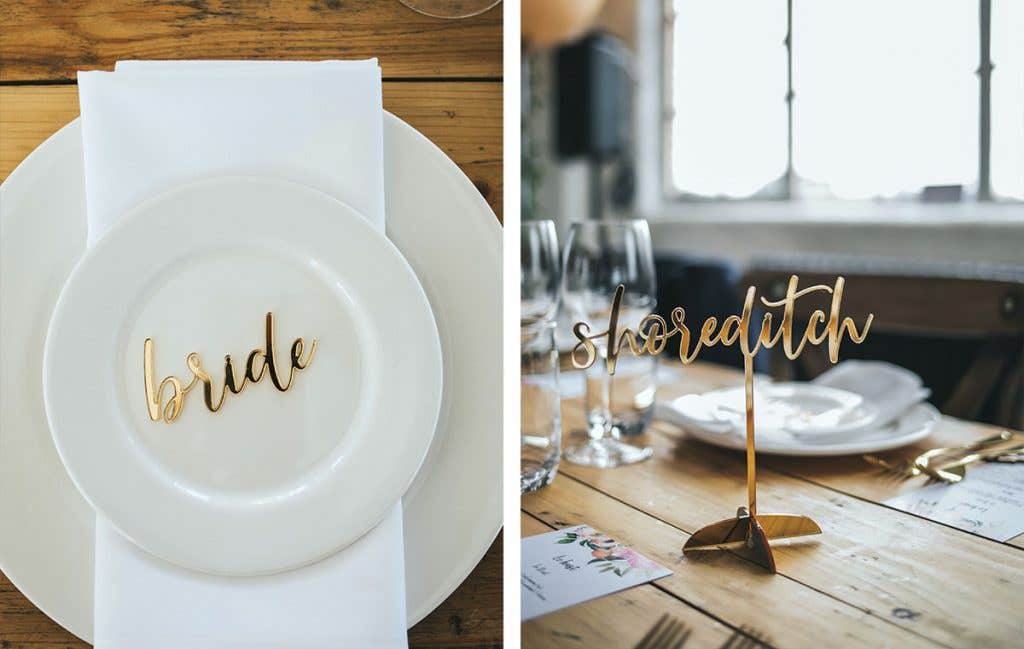 The couple married in August 2018. “The bridal party walked down the aisle to ‘Wonder of You’ by the Villagers (an Elvis cover),” says Georgina. “I followed last with my Dad. We had a registrar from Hackney council and chose to just have the normal vows, as I wasn’t comfortable with being overly gushy. A friend also read ‘I Like You’ by Sandol Stoddard. It was all a bit of a blur but my favourite memory is walking back down the aisle with my new husband. We were covered in colourful confetti and there was lots of happy cheering!” 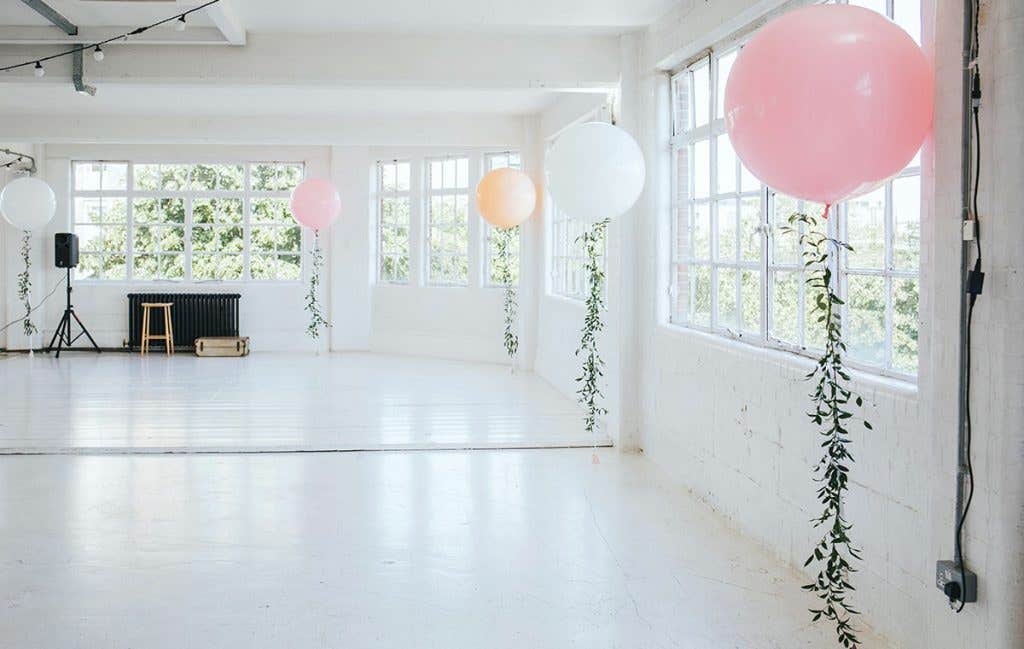 “We wanted super colourful flowers and stylish little touches that guests could take home but, apart from that, the London wedding venue spoke for itself and didn’t need much decorating,” says Georgina. “We enhanced the large arched window of the ceremony room with a semi-arch of flowers that seemed to grow from the ground and also added some aisle runners. Everything else was left as is. For the reception room we had giant balloons, a giant flower wall and gold, laser-cut calligraphy names for the place settings. The disco room had a giant neon sign, a photo booth and we brought down the balloons from upstairs to dot around.” 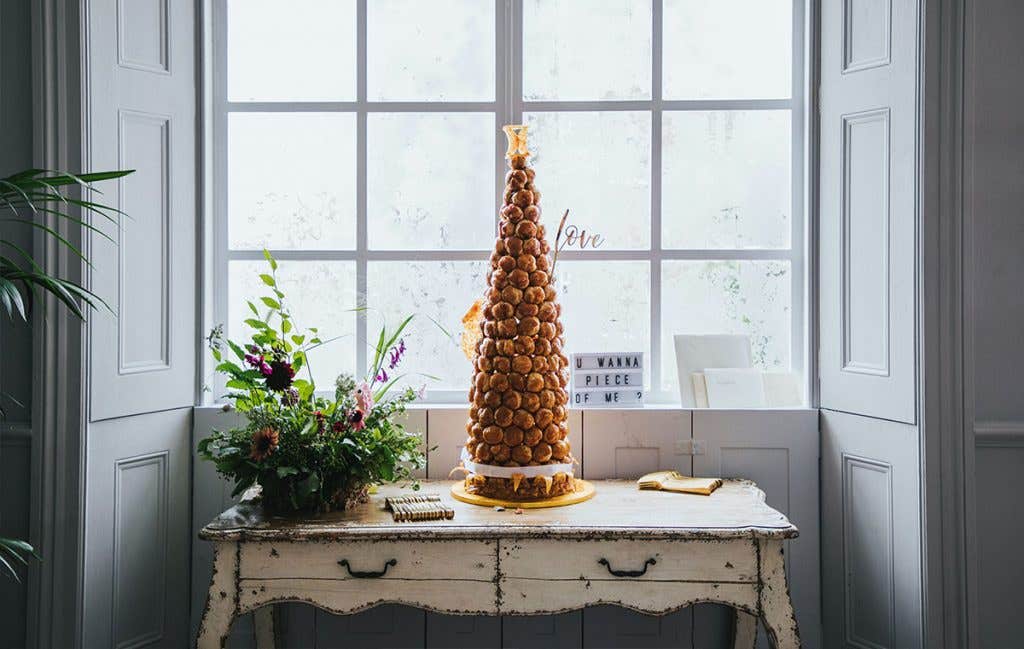 A taste of France

“My mum insisted on a French wedding cake, so I asked the caterer to source a croquembouche tower,” says Georgina. “I didn’t even see it till the day, but it was perfect and delicious. I had a ‘Love’ laser-cut cake topper made for it too.”

“Our DJ didn’t turn up!” says Georgina. “His car broke down and there was no replacement. My first dance was ruined and all the French songs I had lined up for my family from abroad didn’t get played. Luckily the venue had a laptop and a great sound system and, in the end, everyone joined in to DJ the wedding, which was fun!” 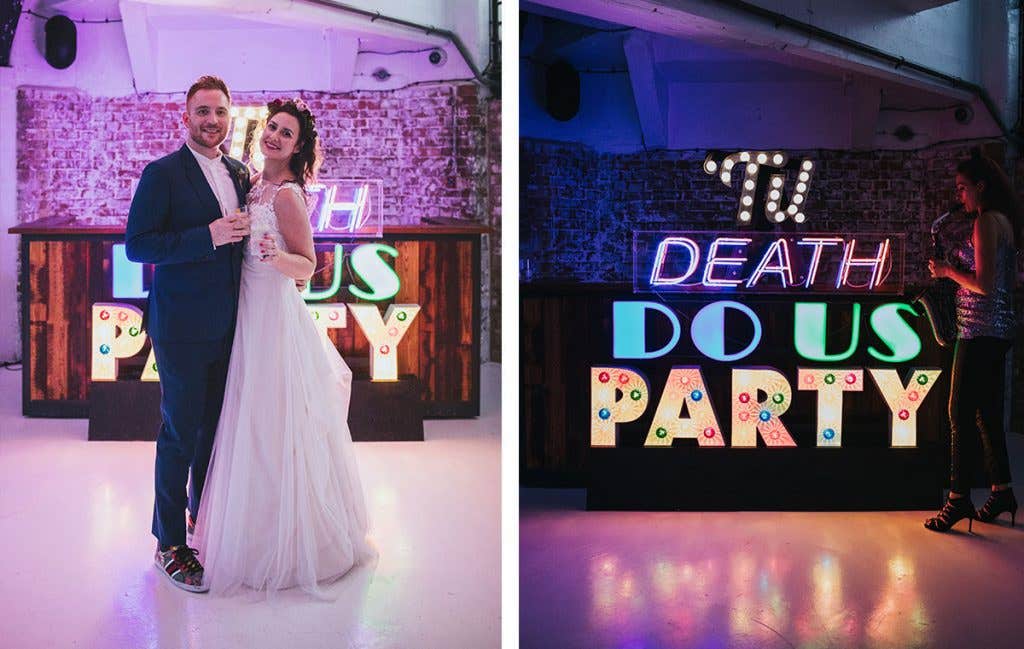 Let me entertain you

“The most fun thing was our flower wall!” says Georgina. “ Everyone wanted to be in the photos, it was hectic but hilarious. I don’t think the photographer got the shots in the order she wanted and there was a lot of yelling to find people! My dad’s speech was also… different! He had kept my pacifier from when I was a baby (unbeknownst to me) and presented it to my new husband to use if he ever needed to calm me down. Great!”

Did your wedding have the wow factor like our London wedding feature? If you would like to be a part of our real weddings feature send your favourite photo to info@wed2b.co.uk and we’ll be in touch