A breathtaking beachside location made this happy couple’s dream day a reality. Our WED2B Real Weddings Swindon feature reveals more: Nicki and Greg first met when they were 15-year-olds, hanging out at the local ice rink. A few years later...

Nicki and Greg first met when they were 15-year-olds, hanging out at the local ice rink. A few years later they became friends and soon best friends. “We got on so well that I never wanted to spoil it or lose that friendship,” says Nicki. “Finally, after three years, I gave in and we went on a date. Greg took me to the cinema to see Batman The Dark Knight. At first, it felt so awkward being on a date with your best friend but we get on so well that it seemed stupid to not allow our feelings to grow. Now we’re still going strong after nine years!” 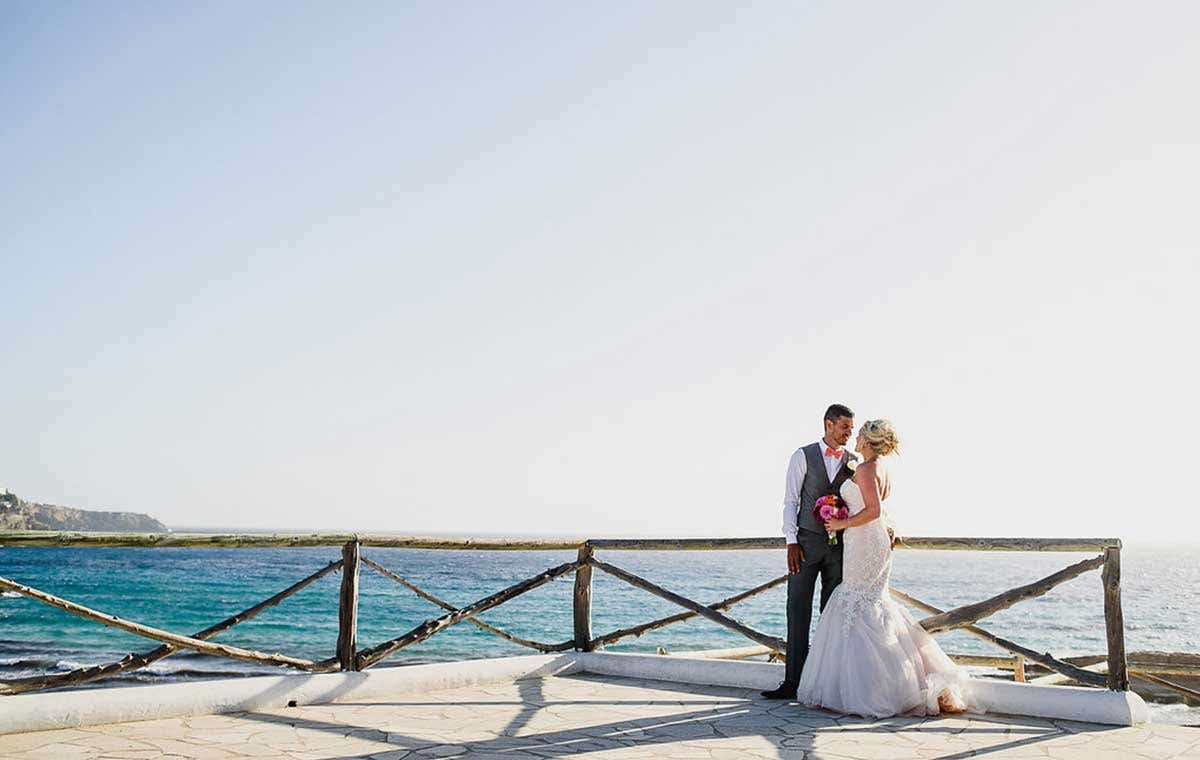 The couple were having a BBQ with family and friends to celebrate having lived in their new house for a year. “It was so lovely to have our closest friends and family with us, and then Greg stood up to thank everyone for coming,” says Nicki. “He said that he had a surprise and my brother shouted ‘Babies!’. While I was turned away, giving my brother the death stare, Greg pulled out a box. Then when I looked back he was down on one knee asking me to marry him. I was extremely surprised!” 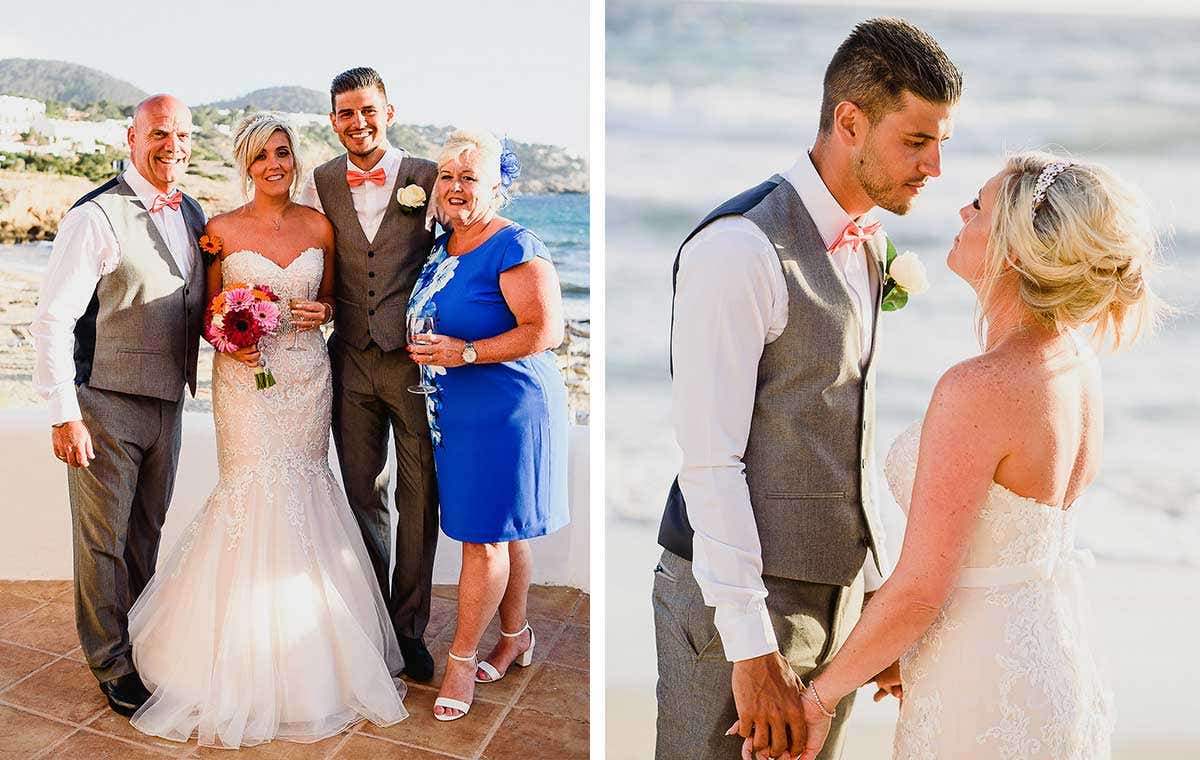 “My store experience was amazing,” says Nicki. “I’d followed WED2B on social media for a year, so when I heard about the Swindon store opening I knew I had to go. My Mum, Nan and maid of honour came with me and we went the day after it opened. I told everyone that they could each pick a dress and then I would go and try four on, and we did this a few times. I must have been in the store around three hours and the team were so patient with me. I only tried on 12 dresses but in that 12 was the Gracie in blush.”

“As soon as the store assistant zipped me in I instantly looked at myself and said, ‘Wow'. I hadn’t had that feeling with any other dress and it just felt like Gracie was made for me. It needed minimal alterations and that made me love it more, knowing it fitted my curvy shape without needing to be changed.” 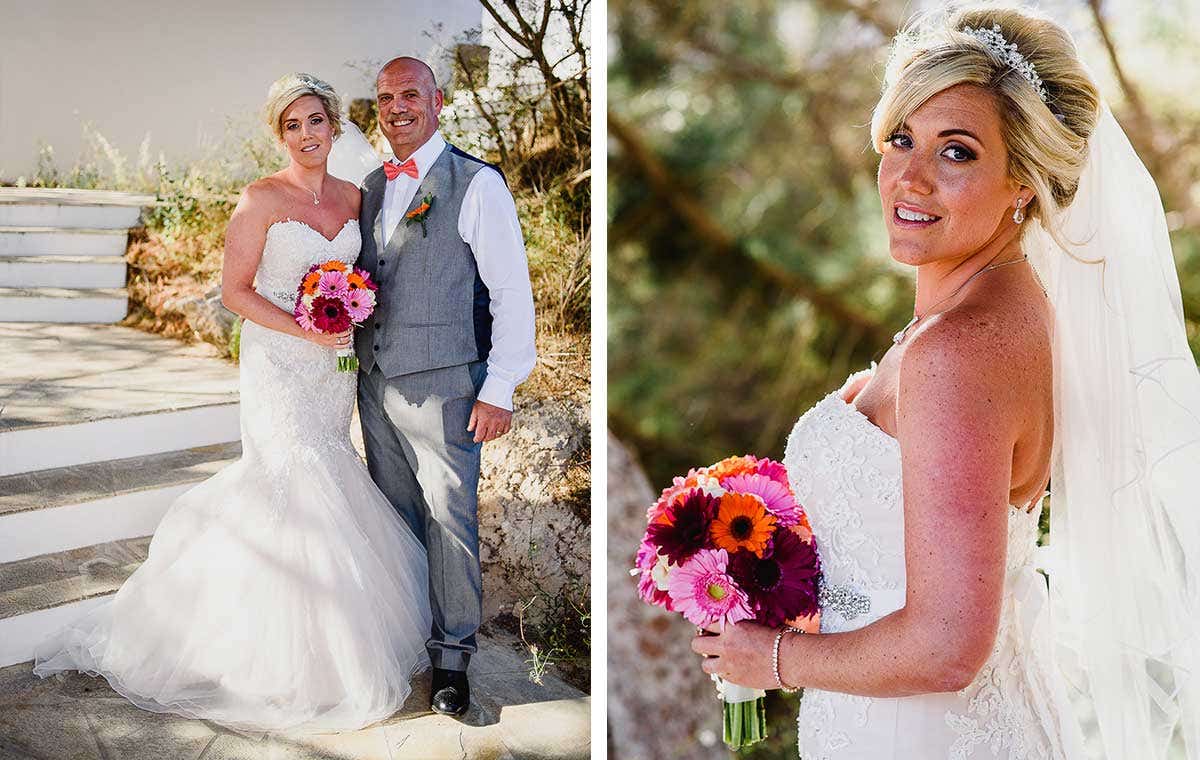 “The team were so helpful at suggesting accessories too, and I also bought an underskirt, a diamanté belt and a veil with gorgeous crystals that glistened when I moved. I now recommend WED2B to everyone, because it was such a relaxed experience.” 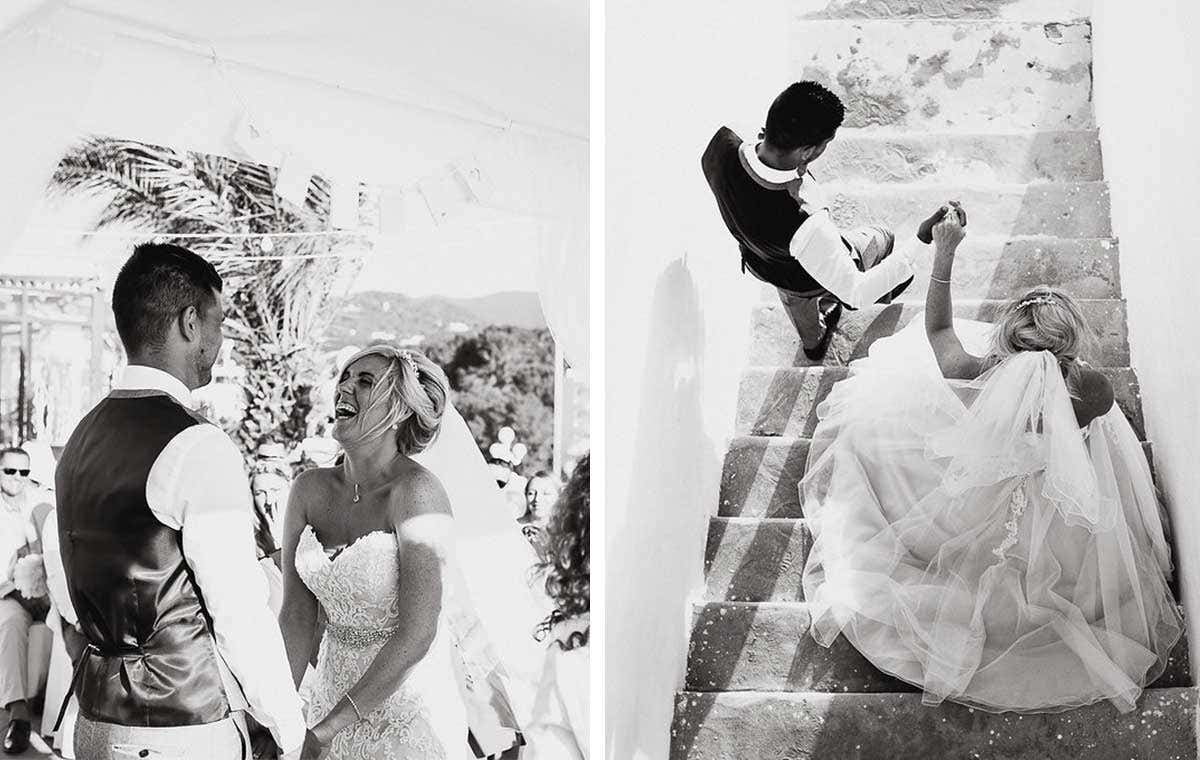 After looking at lots of local venues the couple deciding to try further afield. “We were unsure about a wedding abroad but nothing local really stood out,” says Nicki. “I then started looking online and found Cas Milà restaurant in Ibiza and instantly wanted to go and see it. Greg agreed it was beautiful and booked us a weekend away in Ibiza. When we drove to the venue the view of the white beach and crystal blue waters took our breath away. Then walking around the venue and feeling the sea air we knew that nothing in the UK would compare. The idea of being married at sunset, overlooking the sea with this picturesque setting sold it to us. So we grabbed ourselves a drink and sat at the venue for an hour calling our parents to tell them we had found the one!” 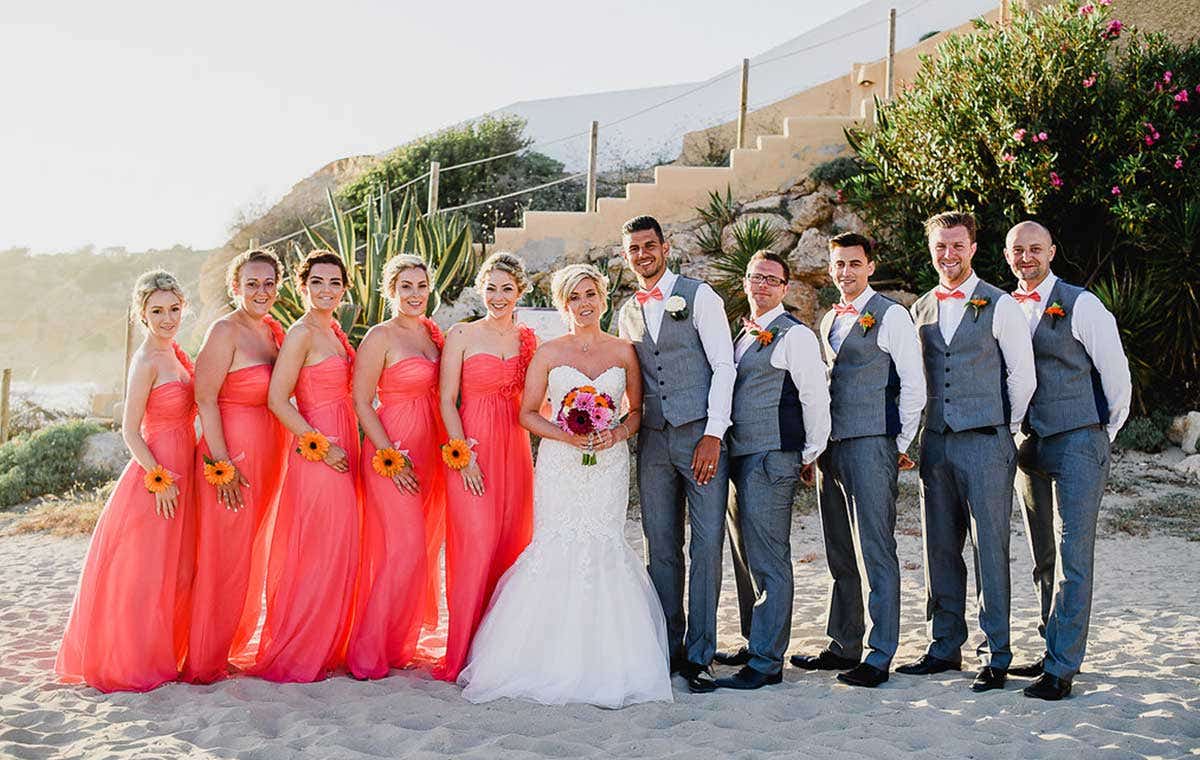 The ceremony was held at 6 pm, just before sunset. “We didn’t have any readings but we did have a traditional sand ceremony,” says Nicki. “We both had a shot glass of sand and we had to pour the sand into a glass bottle at the same time. The amount of sand in the jar at the end represents good luck. My Dad walked me down the aisle and I wouldn’t have had anyone else. My Dad had a stroke the year before so having him there was a blessing in itself. Our music was quirky, I walked in to Eva Cassidy’s ‘Songbird’ as it reminds me of my Granddad. Afterwards, we walked back down the aisle to Danza Kuduro by Don Omar, from one of our favourite films Fast and Furious. Greg and I just couldn’t stop dancing and laughing and it just showed what we are like together.”

Afterwards, drinks were served on the deck while the couple had photographs taken on the beach. Then everyone enjoyed a sunset dinner on the terrace followed by speeches and dancing inside and outside under the stars. There were also fire dancers to entertain the guests. 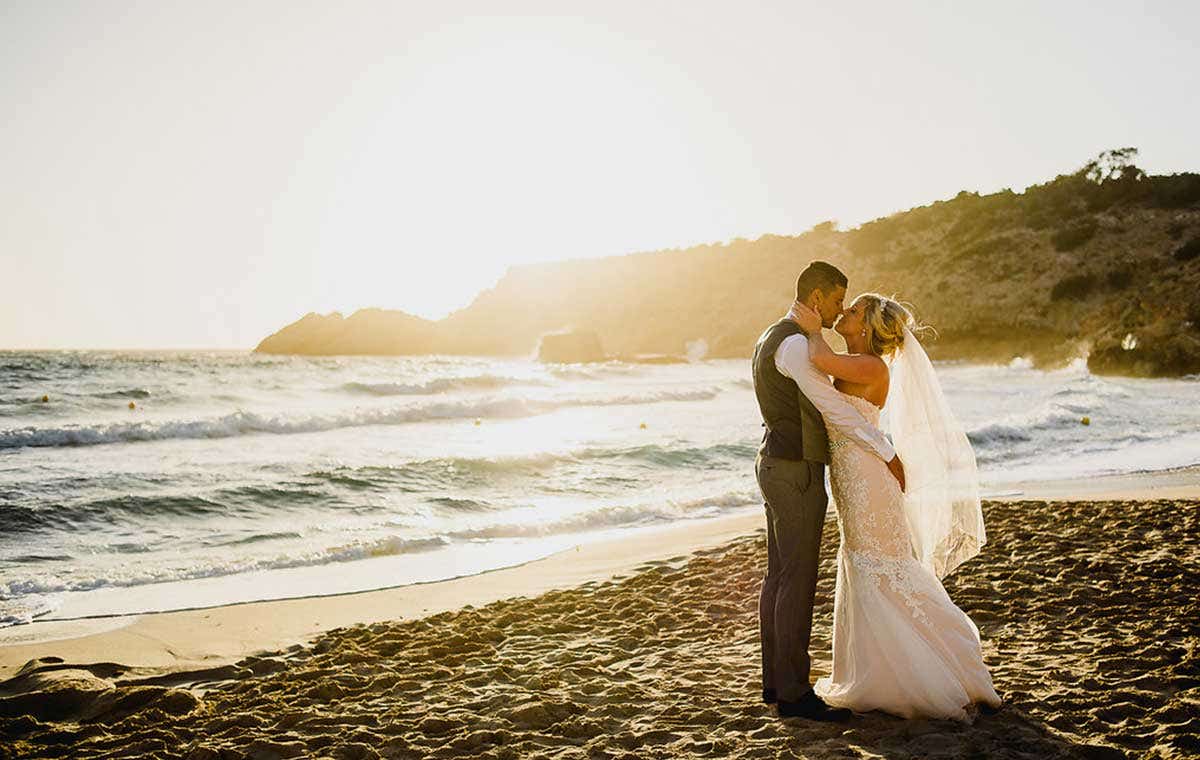 “Our tables were all named after Ed Sheeran songs, to go with the first dance song, and the venue decorations were very minimal,” says Nicki. “I tried to keep it very white with small splashes of colour, such as the pink and orange pom poms along the aisle. On the tables, we added pink crystals and name cards were pink lips for girls and grey moustaches for guys. Around the venue, we had lots of signs with quotes and special sayings that added to our day.” 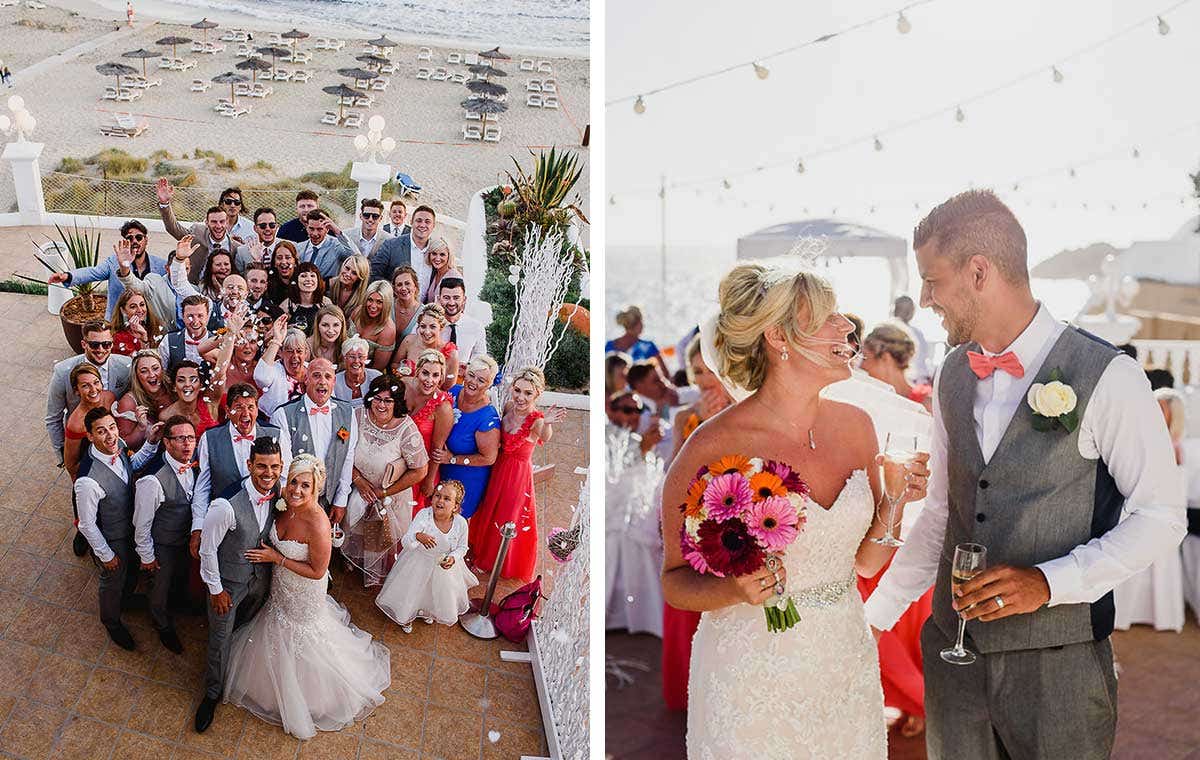 The night ended with the newlyweds being circled by all the guests singing Frank Sinatra’s ‘New York, New York’ while throwing inflatable guitars and hammers around. “It was so much fun,” says Nicki. “Also our fire dancers were amazing and so much fun to watch. One of my most memorable moments was having a Father/Daughter dance with my Dad to ‘The Way you look Tonight’. While we were dancing he asked me whether I recognised the singer. I’d just presumed it was Frank Sinatra but it was actually my Dad! He had pre-recorded it to surprise me!” 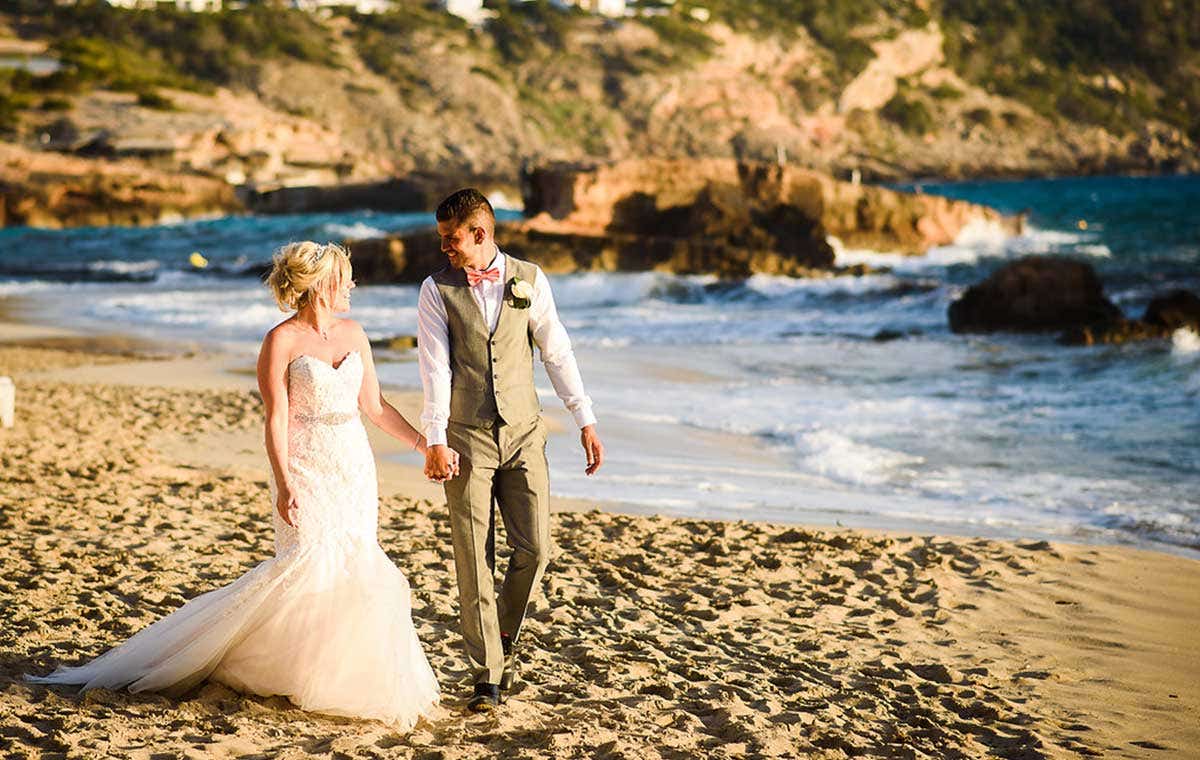 Did your wedding have the wow factor like our Real Weddings Swindon feature? If you would like to be a part of our real weddings feature send your favourite photo to info@wed2b.co.uk and we’ll be in touch!