We reveal our £25k competition winner!

What would you spend £25,000 on? An amazing venue? The best wedding breakfast money could buy? Or a breathtaking honeymoon to somewhere exotic? Well, last September we gave one lucky bride the chance to find out when we launched a...

What would you spend £25,000 on? An amazing venue? The best wedding breakfast money could buy? Or a breathtaking honeymoon to somewhere exotic? Well, last September we gave one lucky bride the chance to find out when we launched a competition to win exactly that amount in cash…

The competition involved five challenges that our brides and their ‘bride tribe’ had to complete, with each one increasing the chances of winning. These included tagging your bride tribe in WED2B’s Facebook and Instagram post and then asking them to share their best advice for the bride-to-be and also their reaction photos. Finally, we asked your bride tribe to tell us what they thought you would spend the prize money on and also suggest their favourite WED2B wedding dress for you to wear on the big day.

Taking up the challenge

We received over 4,000 entries, which included tons of great tips, sweet messages and brilliant advice from bride tribes all over the UK. The competition closed on 31st Dec and we picked the winner, chosen at random, a few weeks later before inviting her along to her nearest WED2B store so we could break the news…

And the competition winner is… Nicolle Burton from Thurnscoe, South Yorkshire!

Nicolle Burton is a 25-year-old customer service advisor and mother of one, who was born and raised in Rotherham. She’s been busy planning her wedding to fiancé Tim Baker for the last two years and is getting married at Barnsley Register Office this May. We invited her back to the Rotherham store with her Mum on 24th January. She was under the impression that she’d simply been shortlisted to win the cash prize but, when she arrived, we presented her with a giant cheque for £25,000! 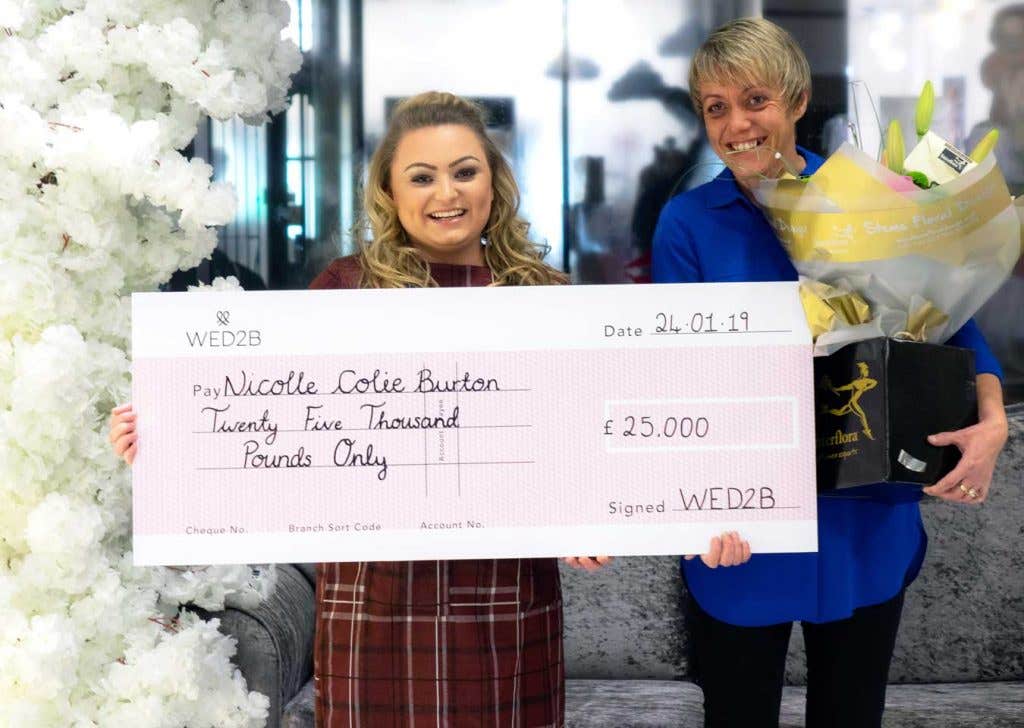 “I was shocked and felt sick when I heard the news,” she said afterwards. “I couldn’t believe it!” When we asked Nicolle how she was going to spend the money she told us, “As my wedding is in May, a lot of it is already planned. So I think we’re going to spend the money on something for ourselves, like doing up the house”. Nicolle’s mother was also at the big reveal and told WED2B, “I’m so shocked. She’d been pretending she’d won the £25,000 and had already spent it! I’m sure some of it will go on a lovely honeymoon”. 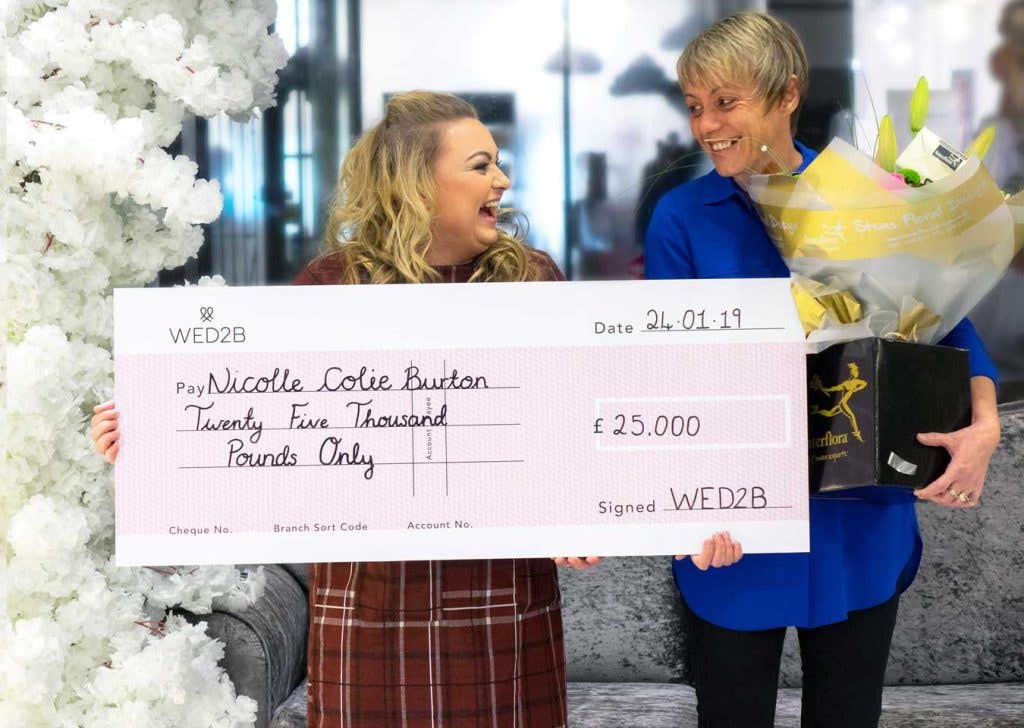 The story of the big day…

Nicolle has been planning her wedding since her fiancé’s romantic proposal while they were away on holiday. “We were in Tenerife and it was the first time I’d been abroad,” she says. “I knew he was going to do it. I'd already told him to make sure I was looking nice when he asked! He proposed in a lovely little restaurant just across the road from where we were staying. The restaurant owner came out and told us it was a beautiful moment.”

Nicolle found her dress at WED2B’s Rotherham store on her second visit. “I couldn't decide between two designs,” says Nicolle. “So I visited again a weekend later with my Mum. I wanted to know which one she liked the most but she said they both suited me! In the end, I just looked in the mirror and thought, that’s the one!” 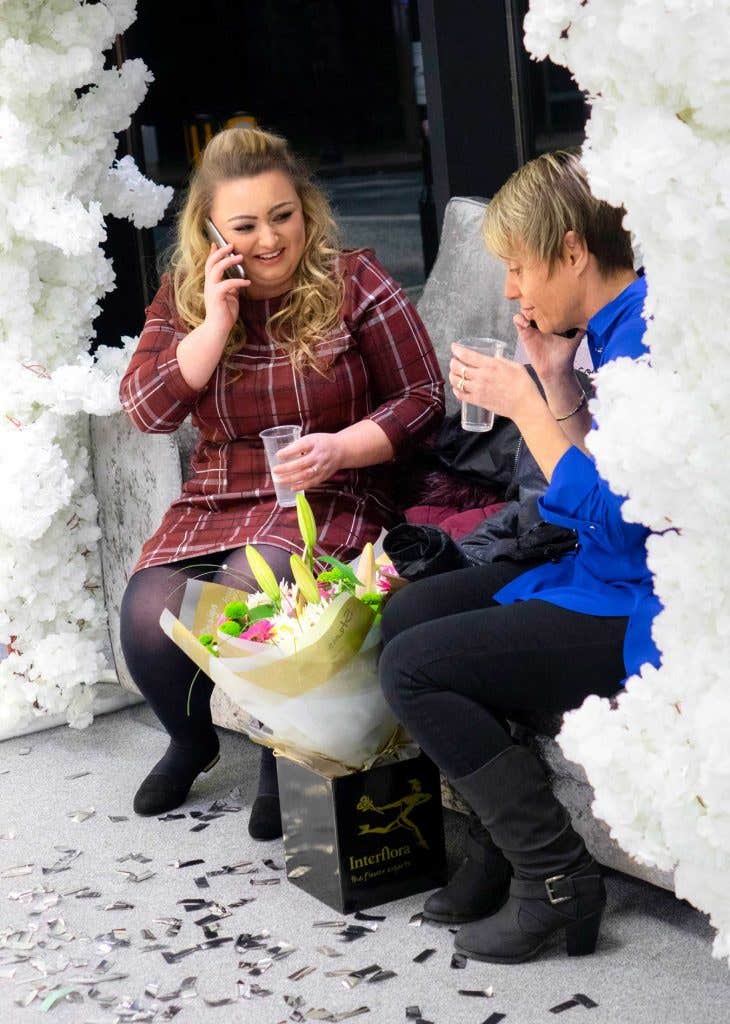 The ceremony is being held at Barnsley Register Office, where Nicolle’s parents also married two years ago. “It’s very nice and I just wanted it all to be low key,” she says. “I’m having eight bridesmaids, flower girls and page boys in total, including my one-year-old daughter, Lilly, and Tim’s son, Josh. After the ceremony we’re all going to the pub!”

Congratulations from everyone at WED2B!

“It’s fantastic to be able to help one of our brides with the WED2B £25K Giveaway," says Todd Cassidy, Managing Director at WED2B. "We wish the lucky couple all the very best for their big day and their future together”.