This couple headed to the Dominican Republic for a beachside ceremony and reception under the stars. Our WED2B Real Weddings Abroad feature reveals more: Rachel and Kieran met five years ago via social media. “We’d got chatting and I thought...

This couple headed to the Dominican Republic for a beachside ceremony and reception under the stars. Our WED2B Real Weddings Abroad feature reveals more:

Rachel and Kieran met five years ago via social media. “We’d got chatting and I thought he was cute,” says Rachel. “We’d been texting for a few weeks when I was due to go on a night out with a friend but she cancelled as she wasn't well. Kieran suggested I come and meet him for a drink instead. And, as the saying goes, the rest is history! I think I owe it to my friend for being ill that day, so ‘Thanks Vicki!’”

Before proposing Kieran went to ask for Rachel’s father’s permission. However he hadn’t bargained on Rachel’s Mum hearing! “She squealed with excitement and said she couldn’t keep it a secret, so he'd have to hurry up and do it!” laughs Rachel. “No pressure then! We were about to go on holiday, which is where I think Kieran's original plan was. Now knowing other people were in the loop he took me to one of our favourite spots instead. We were walking around the shore of the local reservoir at sunset with the dogs when he asked the big question. It was perfect, as I had everything I wanted and needed there in that moment!” 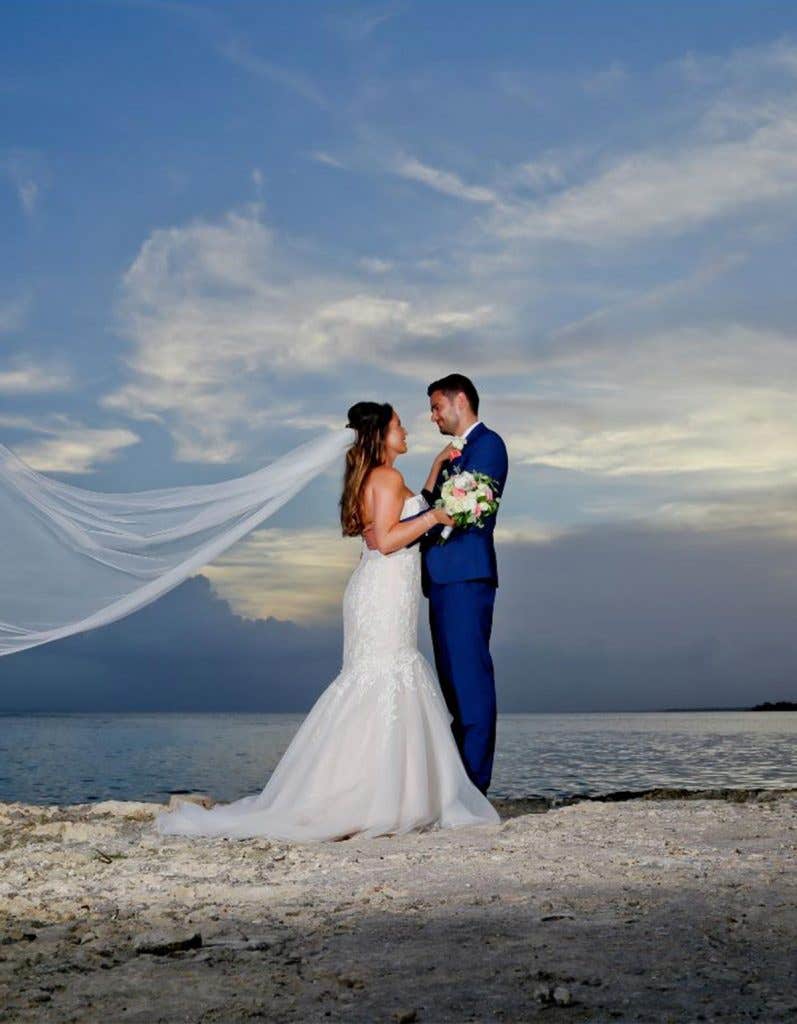 Rachel chose WED2B’s Gracie fishtail dress in blush. “It made me feel absolutely amazing and had everything I hoped for; the dramatic fishtail skirt, lovely lace and beautiful beading,” says Rachel. “I’d been looking at high-end designer dresses but the costs really put me off. Just think how many nice pairs of shoes I could have instead! When I saw Gracie I knew it was exactly what I wanted and I could also then justify buying my beautiful sparkly red-bottom Christian Louboutin shoes to go with it! I also purchased a fishtail underskirt to really give my dress the drama it deserved and a beautiful beaded belt, both from WED2B.”

The couple decided on a beautiful sunset wedding in the Caribbean. “We knew we wanted to get married abroad so I started looking for venues in Europe,” says Rachel. “Once I looked into costs I realised that going further afield to the Dominican Republic actually gave us more for our budget and also an unforgettable holiday for our guests. I scoured wedding forums and found Dreams La Romana and fell in love. I wouldn't say I was a bossy bride but I couldn’t imagine just turning up there to get married without having got a feel for the place, so we flew out for a holiday beforehand. We met the wedding co-ordinator and fell in love with the magical pink sunsets.” 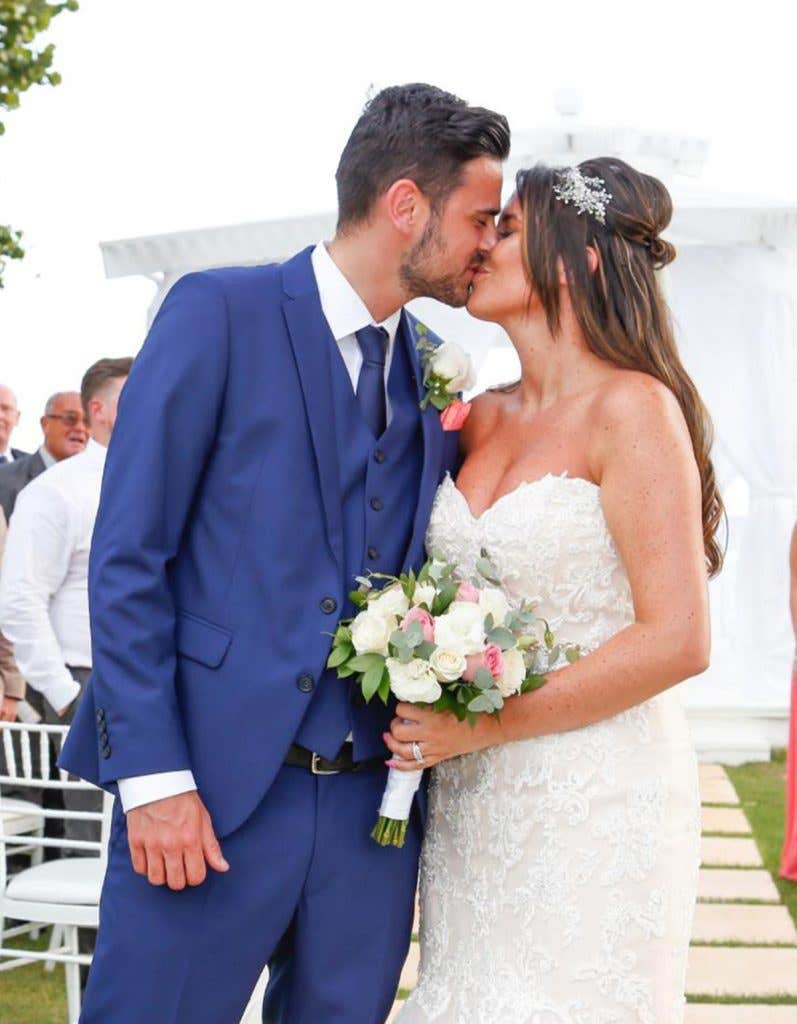 The ceremony was held in the garden gazebo overlooking the sea. “It was incredible,” says Rachel. “After spending days worrying whether it would rain – and even watching a poor bride get rained on the day before - I was nervous we weren't going to get the weather. We were so lucky though, on the day there were just a few clouds in the sky. My favourite part was definitely walking down the aisle to Kieran. It took me months to find the perfect song and I finally settled on an acoustic version of Beyonce's ‘Halo’ sung by Madilyn Bailey. I kept it a secret, as I had done with my dress too, so I got to see all my guests’ faces as I walked down the aisle in my dress and cathedral-length veil. It was amazing, even the groom had tears in his eyes.” 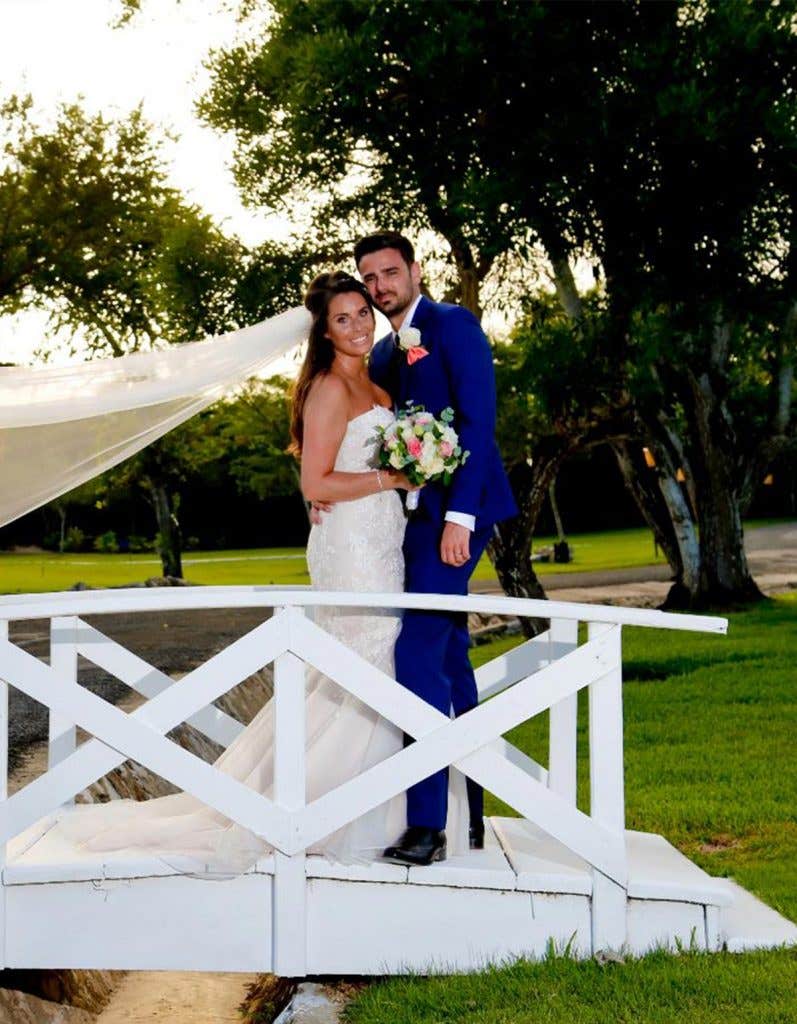 The couple were married at sunset at around 5:30pm. Afterwards the newlyweds had some photos by the shore while guests were treated to a fantastic cocktail hour on the pier, overlooking the beautiful white sand. “We arranged for a large cocktail bar and canapés and they were serenaded by a fabulous Caribbean trio band,” says Rachel.

All things bright and beautiful

“I knew that I wanted to bring colour in to the day to go with the turquoise waters,” says Rachel. “As my dress was a blush colour though I thought there should also be some lace and blush pink too. I did this with my flowers and I bought beautiful vintage lace fans to keep guests cool.” There were also personalised slate hearts name tags and shot glasses too. Rachel’s little nephew had an 'I Spy' kit with a disposable camera and challenges to take photos of different things, which he loved! 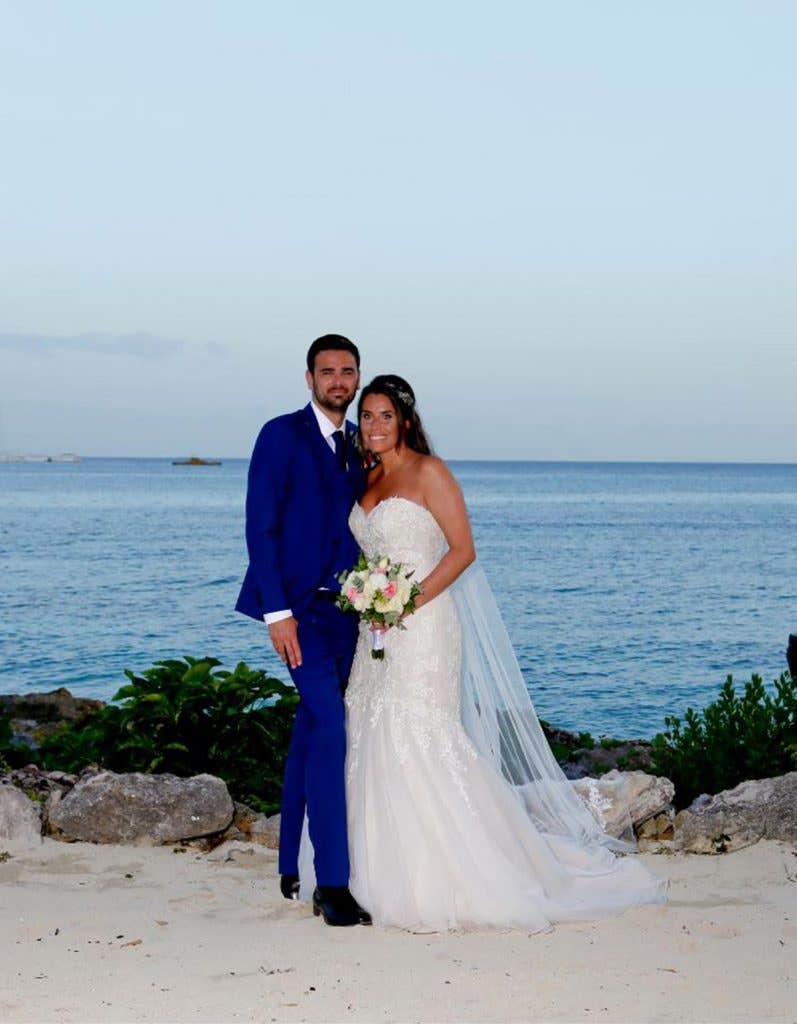 Dancing under the stars

The main reception was held on the beachfront where guests could dip their toes in the sand. “We had a beautiful wooden marquee with bistro lights that mimicked the stars,” says Rachel. “It was everything I dreamed of and more. We also had a big light-up dance floor where we knocked out some moves after our four-course meal.”

“My favourite thing was our first dance to John Legend’s 'All of Me',” smiles Rachel. “Just as we were finishing Kieran twirled me around and the most spectacular fireworks started to erupt above us. My legs turned to jelly and my eyes went all sparkly. He’d managed to do this as a surprise for me and it was absolutely magical!”

Did your wedding have the wow factor like our Real Weddings Abroad feature? If you would like to be a part of our real weddings feature send your favourite photo to info@wed2b.co.uk and we’ll be in touch!