The city’s town hall was the ideal setting for this Manchester Wedding, filled with fun, laughter and a four-tier pork pie ‘cake’! Our WED2B Real Weddings Bolton feature reveals more: Neil was actually in the year above Maureen at secondary...

The city’s town hall was the ideal setting for this Manchester Wedding, filled with fun, laughter and a four-tier pork pie ‘cake’! Our WED2B Real Weddings Bolton feature reveals more:

Neil was actually in the year above Maureen at secondary school in Manchester. “I knew who he was, but, as is typical, he never noticed me!” she laughs. “Then in 2006 we got chatting at my best friend’s birthday celebration at Chester Races (my best friend eventually married Neil’s best friend from high school). Our first date was at an Irish bar in Manchester. We drank Magners, didn’t move from our seats for hours and I didn’t stop laughing.” 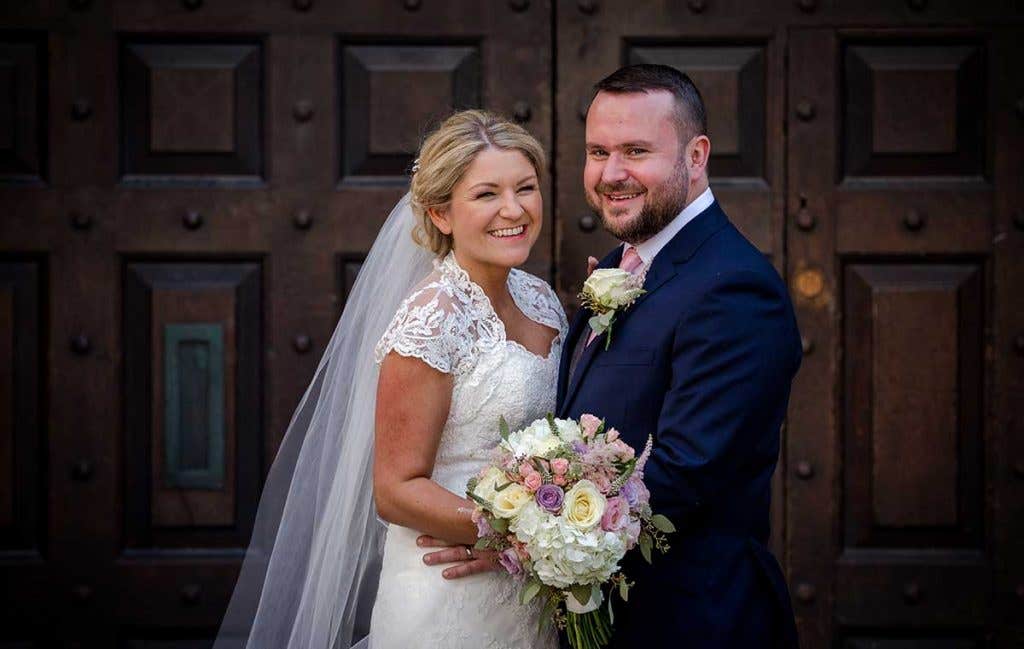 In 2015, after nine years together, the couple enjoyed a holiday in Florence, Italy. “We stayed in a beautiful 15th Century Renaissance palace and were blown away by this beautiful city,” says Maureen. “On our last night we had a meal at a restaurant high above Florence with spectacular views. Feeling sleepy from all the food and wine, I asked the waiter to order us a taxi but Neil insisted that we take a walk around the gardens. In a secluded spot, he asked me to be his wife. I was so surprised I could only manage ‘thanks!’ rather than yes. He told me he’d asked my parents a few days before the trip and I was so surprised that my mum had been able to keep it a secret!” 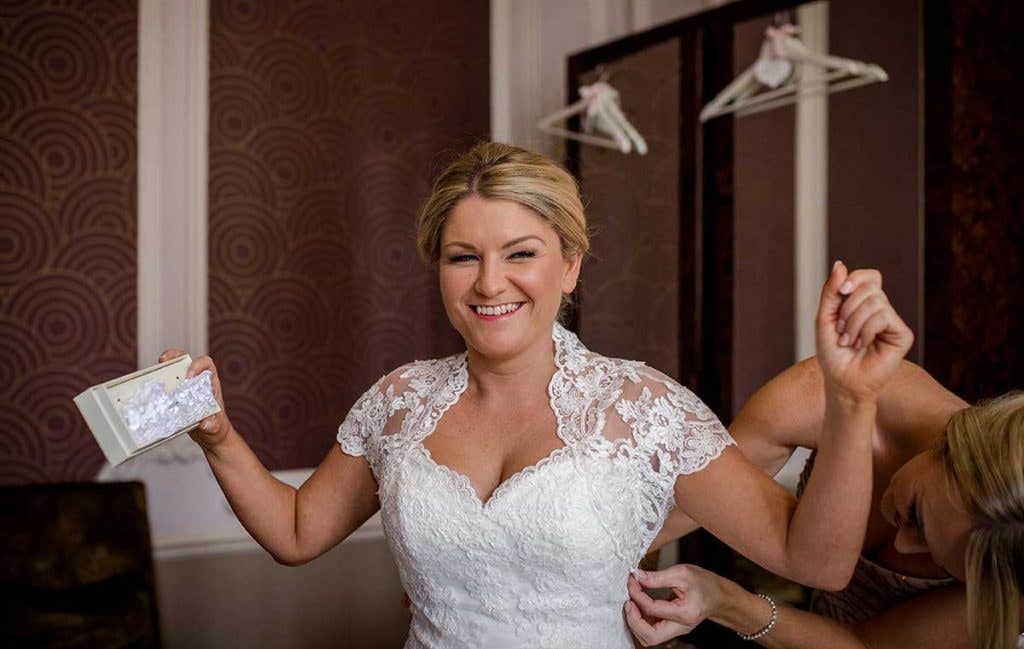 “I’d seen the Constance dress on the WED2B website and loved it immediately,” says Maureen. “I knew I wanted a lace dress with some structure to it, so the corset and ties were perfect. I loved it as soon as I put it on, but also wanted something to cover my arms. On hearing this, the assistant found me a short bolero jacket, which matched the dress perfectly. I had my mum, sister and bridesmaid with me and they confirmed it was perfect. I bought it that day, along with the bolero and an underskirt.” 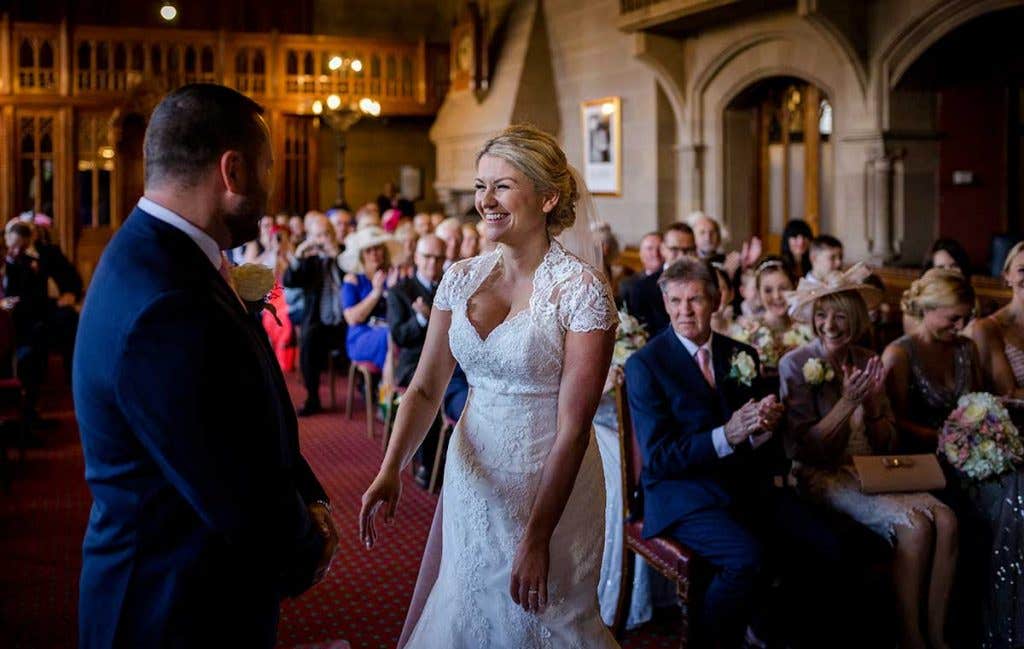 The couple originally thought they’d like a barn or country house-style venue. “We looked at a few, but none of them really wowed us,” says Maureen. “We also didn’t want to be dependent on a wonderful outside space, knowing how unpredictable the Manchester weather is!”

Neil then suggested they take a look at Manchester Town Hall, a building they saw every day but had never been inside. “We went along to an open day and as soon as we went inside and saw the beautiful Edwardian features we knew that it would be perfect for us,” smiles Maureen. “We are very much Mancunians. We're both born and bred here and both of us work in the city centre. We also knew the venue would blow our guests away and we loved that we would be able to see the place we got married every day. We were also one of the last weddings to be held there, as the town hall shut in January 2018 for a seven-year refurbishment, so this made it extra special.” 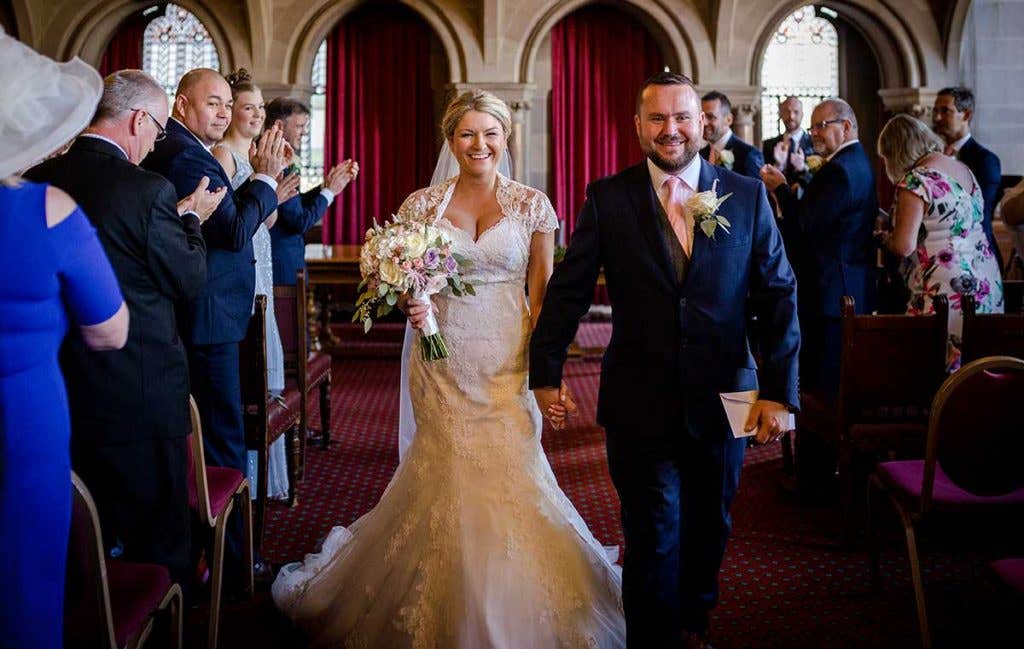 Neil and Maureen married in the Ceremony Room at the Town Hall. “I walked down the aisle with my Father to an instrumental piece called ‘River Flows In You’ by Yiruma,’ she says. “My bridesmaid Dominique did a reading called ‘I will be here’ by Steven Curtis Chapman. While we signed the register we played the slow version of the Proclaimers’ ‘I’m Gonna Be (500 miles)’ by Sleeping At Last. My favourite memory is walking back down the aisle with my new husband, marriage certificate in his hand. I’d felt sick with nerves all morning (in fact, for about three weeks before) and felt so relieved and happy at that point.” 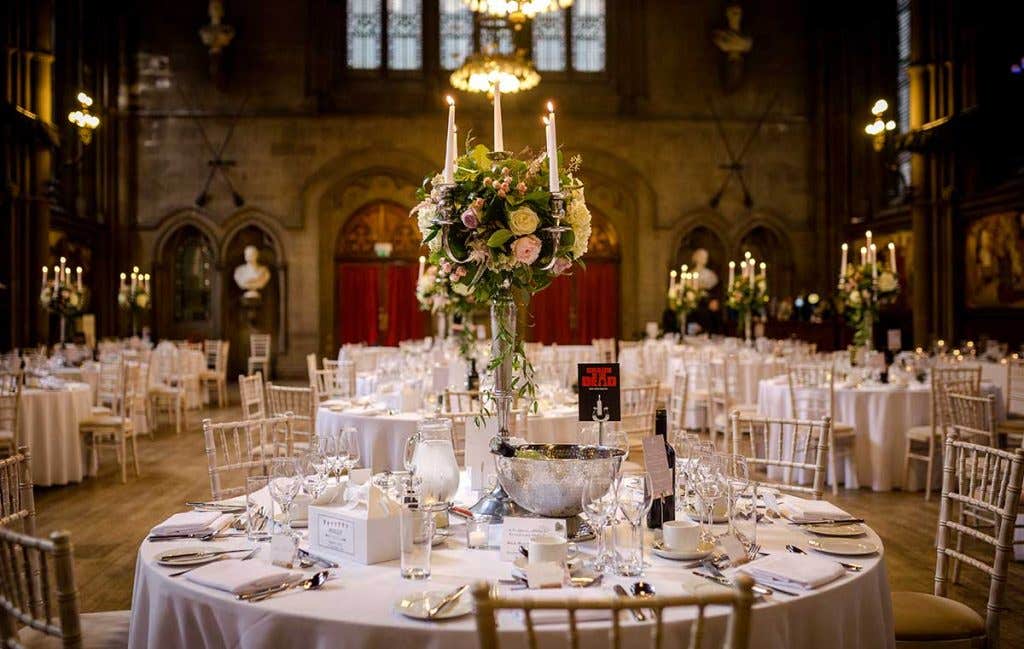 The colour theme was pink and grey with hints of pastel. “I knew I didn’t want anything dark because the town hall is quite a Gothic venue, so we had greys and pinks with hints of lilac and green,” says Maureen. “Our invites set the scene with these colours and we chose the same colours for the centrepieces, which were large candelabras with fresh flowers in cream, pink and lilac and lots of green leaves. These were also the flowers that made up the bouquets. We kept decorations on the tables to a minimum with just personalised activity boxes for the children. Favours were donations to the British Heart Foundation and Macmillan Nurses, which are charities that are close to our hearts.” Tables were named after the couple’s favourite films and the table name cards were created by the lady who designed all of our stationery. 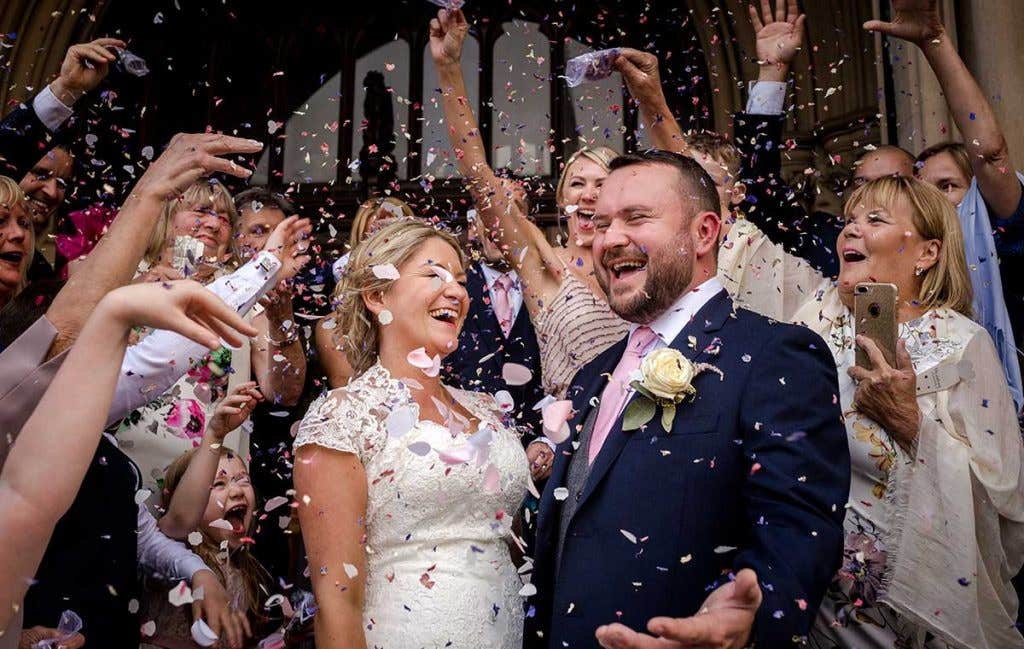 Let’s get the party started!

After the ceremony the newlyweds greeted their guests in the Lord Mayor’s parlour, where drinks and canapés were served. “Neil and I went outside for some pictures at Manchester Central Library and around the town hall, then back to the drinks reception for champagne with our guests,” says Maureen. The wedding breakfast was held in the Grand Hall and included three courses plus a cheese platter, which was served during the speeches. Afterwards a magician entertained guests for an hour while the band and DJ set up. The couple had their first dance to Ed Sheeran’s ‘Perfect’. 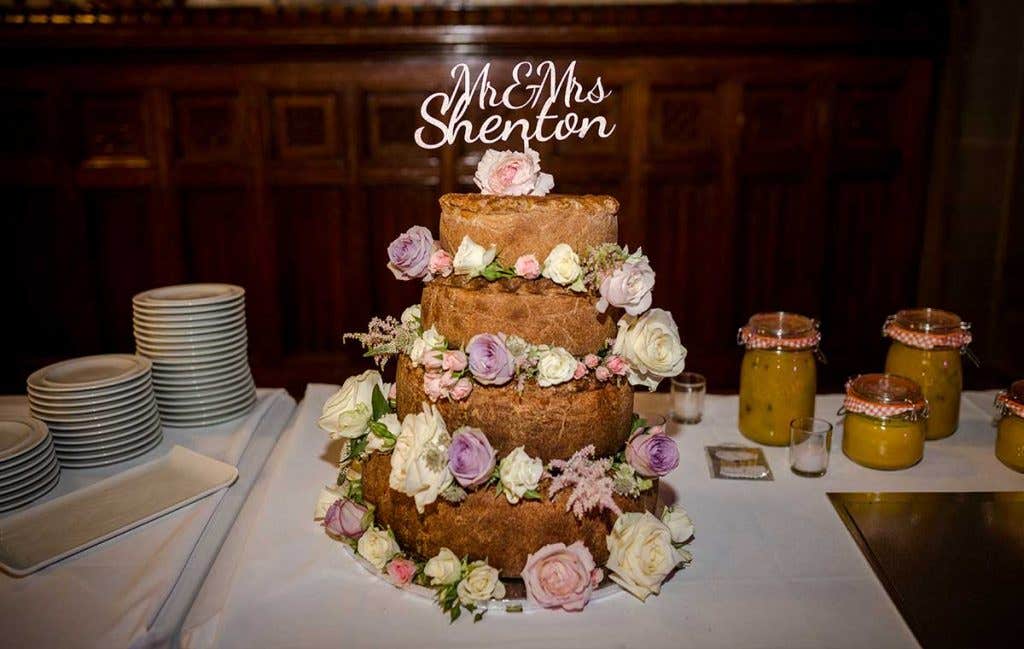 A cake to remember

Instead of a traditional cake a wedding pork pie was the order of the day. “We’ve been to lots of weddings and have never eaten any wedding cake, so knew we didn’t want to have a traditional cake which wouldn’t necessarily be enjoyed by our guests,” sys Maureen. “We really love our food and decided to go for a pork pie wedding cake instead. I contacted a company in Norfolk and after a tasting session, decided on a four-tier pork pie cake with four different flavours – plain, chorizo, lemon, garlic and parsley, and onion marmalade. On the day, it was decorated with fresh flowers to match my bouquet and topped with a ‘Mr & Mrs Shenton’ sign in rose gold. We also provided jars of piccalilli and mustard for our guests to help themselves to. On the night people were actually queuing for a slice and there was literally nothing left by the end! I’d provided takeaway boxes (with personalised M & N stickers) thinking that, as it was so big, there was bound to be lots left over, but it was all gone!” 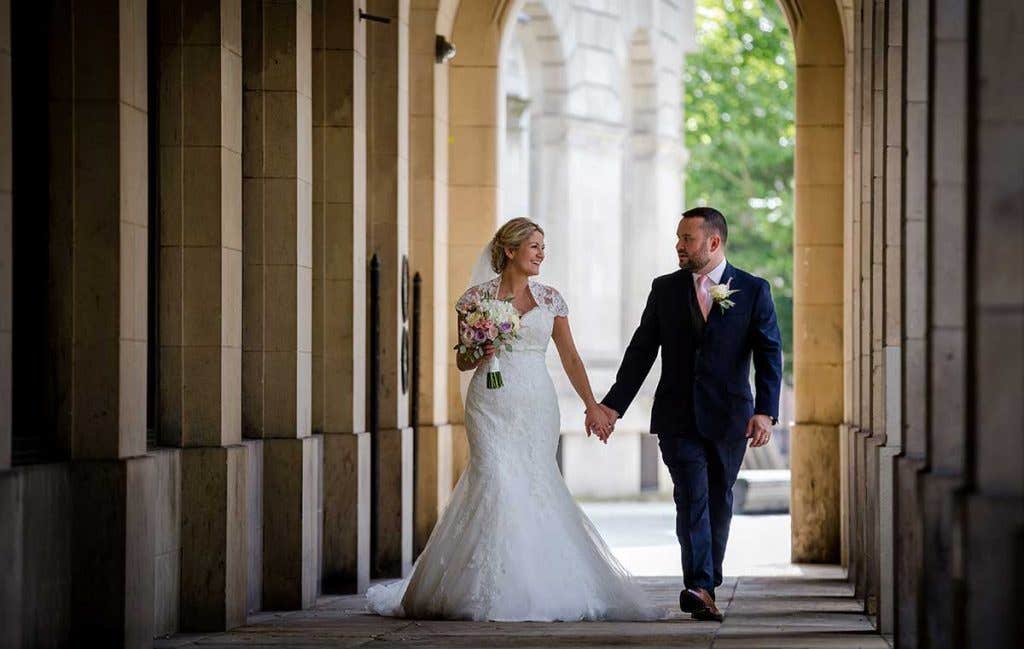 “Book everyone early!” says Maureen. “You’d be surprised how far in advance photographers, make-up artists, transport etc get booked up. Also, double check everything. Your suppliers will have lots of customers and mistakes can happen. And, if we could do it again, I would try to relax more in the run up. It’s easier said than done but the stress of the few weeks before the day was not enjoyable! On the day none of it mattered. Seeing all your family and friends together enjoying themselves and wishing you nothing but love was a memory we will never forget.”

Did your wedding have the wow factor like our Real Weddings Bolton feature? If you would like to be a part of our real weddings feature send your favourite photo to real.bride@wed2b.co.uk and we’ll be in touch!