A wonderfully snowy manor house setting was the perfect backdrop for this fabulous celebration. Our WED2B Real Weddings Brighton feature reveals more: Joanna and Craig first met at the supermarket where they both worked. “He was a friend of a...

Joanna and Craig first met at the supermarket where they both worked. “He was a friend of a friend and we hit it off immediately,” says Joanna. “We became the best of friends and stayed that way for a few years before realising we both wanted more. Our first date was to a cosy candlelit restaurant called Pinocchio's in the Lanes in Brighton. He asked me to be his girlfriend that night and seven and a half years later we are married.” 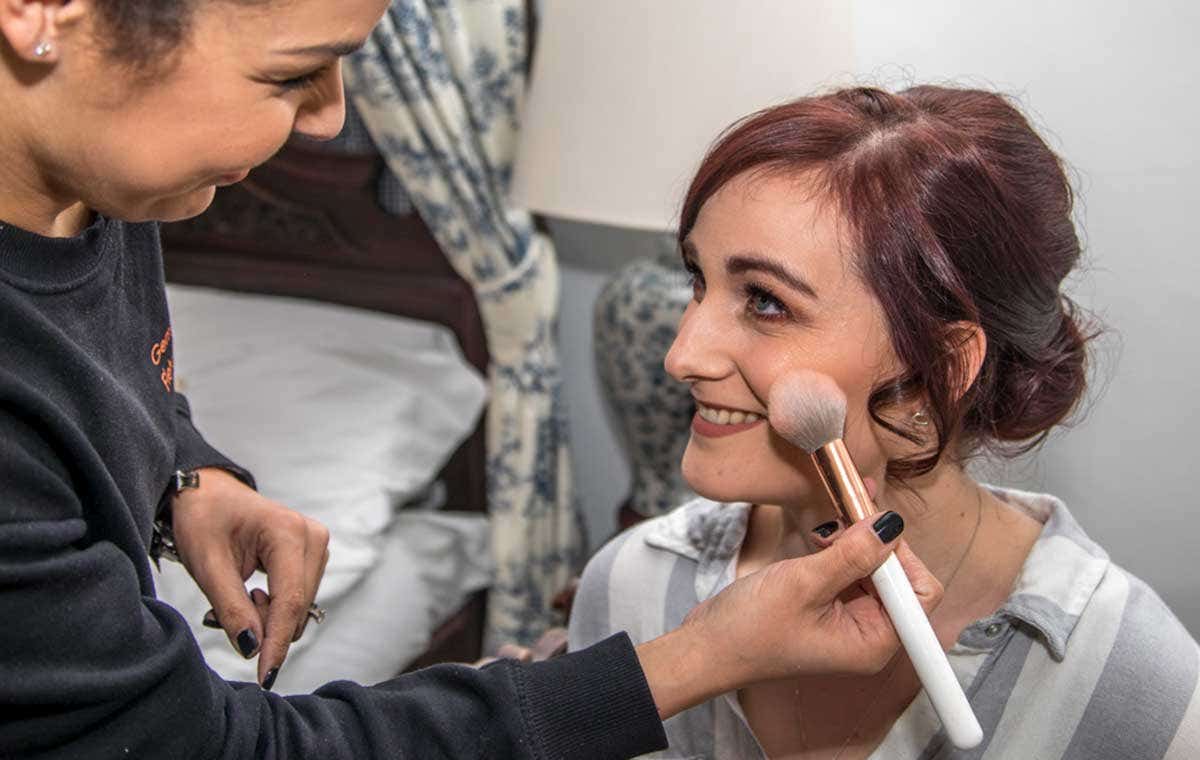 Craig had always said he wouldn’t propose on an ‘occasion’ day, like a birthday or an anniversary. “This was all a ruse!” laughs Joanna. “He proposed to me on my 29th birthday in August 2017. He asked me to find my present in the cupboard under the stairs. I couldn’t find any presents so I closed the door to ask what his game was and he was down on one knee! I did a little scream and said, ‘Yes’, before he even finished his question. He didn’t tell a soul he was going to do it and he chose the most perfect ring for me by himself. I was blown away, as he’d always said it would never be on my birthday!” 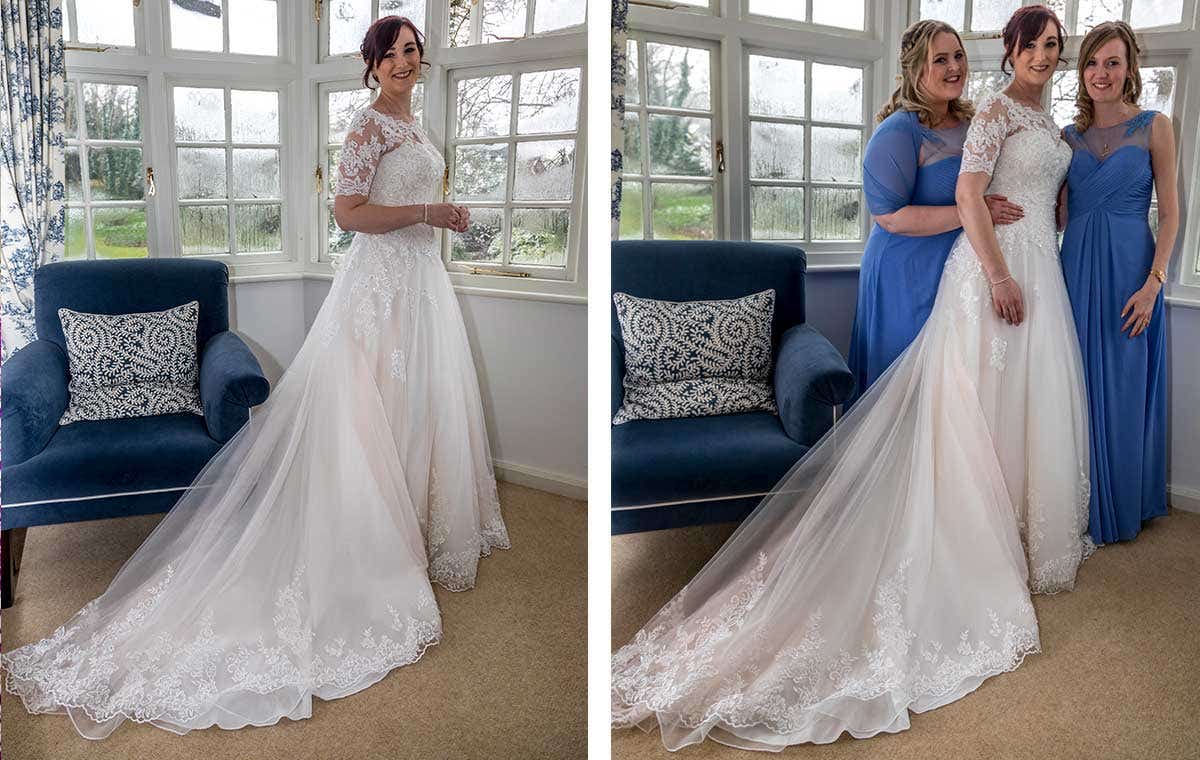 Joanna bought her dress from WED2B’s Brighton Marina store. “I was very keen to go dress shopping,” she says. “I’d seen the WED2B store many times and wished I could go in, so I was very excited when I finally got the chance! I was absolutely blown away by the service I received. The girls in the store couldn't have been nicer. They were lovely and couldn’t have been more helpful. There was also no pressure to buy anything, in fact we were encouraged to go away and think about it over lunch. I cannot recommend that store enough!” 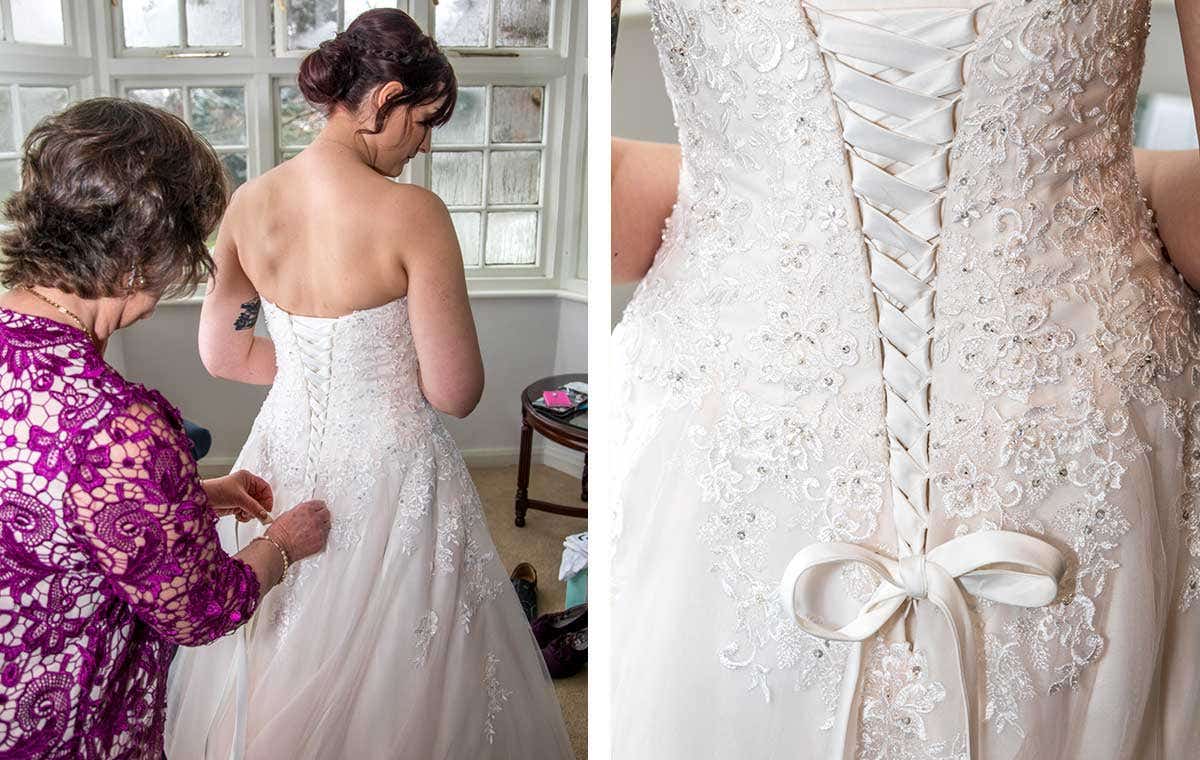 “I wanted to try on Destin, specifically because I’d seen it online and had really fallen for it,” says Joanna. “I went with my mum, my maid of honour and my bridesmaid. The rule was I had to try on one dress chosen by each person. It was my Mum who chose Emmy from the store window. It was strapless and had a fuller skirt than I thought I wanted. One of the girls in the store suggested I try it in blush because of my skin tone. At the time I scoffed, but agreed to try it anyway, for Mum! I put it on and I was so surprised!” 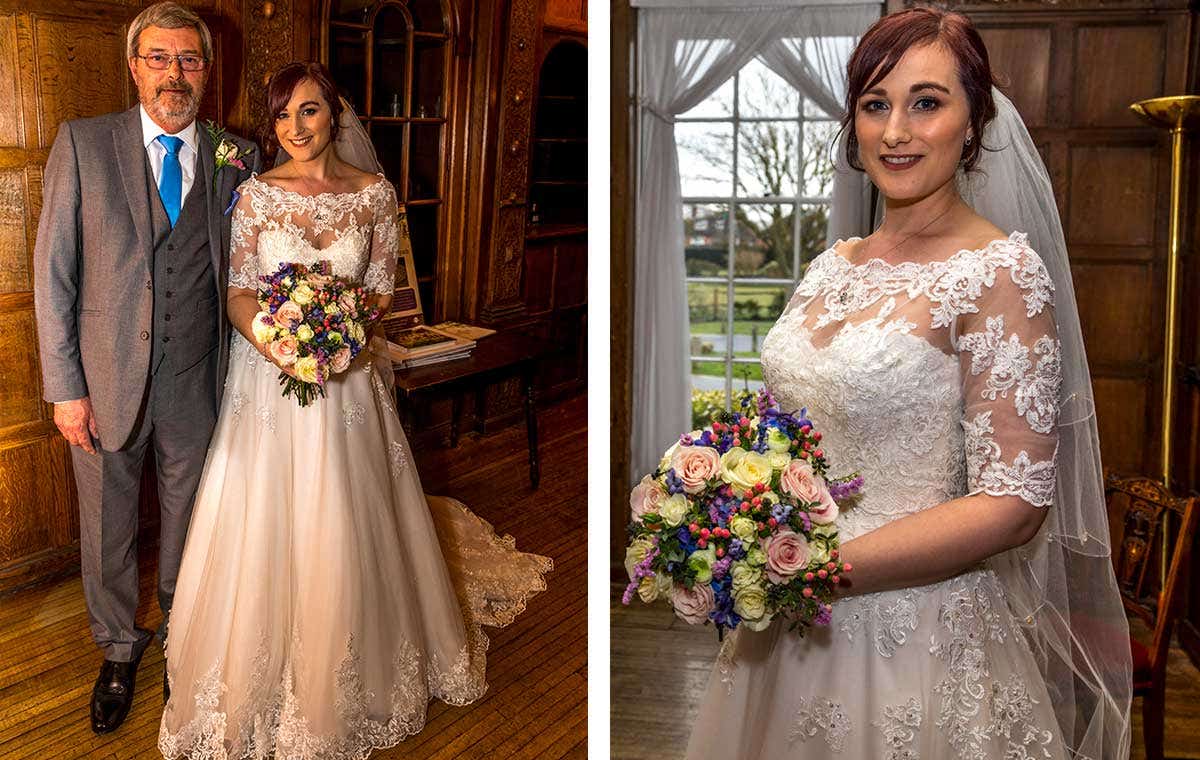 “The beading and the detailing were flawless, and I adored the sweetheart top. I came out of the dressing room and all three of them said we weren’t going to be shopping any more because we had found my dress. I was slightly hesitant because it was strapless, and I was a bit conscious about my arms being on show. One of the girls brought me a bolero with elbow-length sleeves and a switch flipped. That was it, and I was in love. It was beautiful, it cinched me in and gave me a waist, I felt beautiful in this dress.”

Joanna also bought beaded straps which she attached with some discreet poppers so that they could be easily swapped out. "By the end of the night I had removed the straps as well, so I had three different styles of Emmy dress throughout the day, which I loved,” she says. “This dress is so versatile and every iteration of it looked different but remained stunning, I could not have been more pleased with how it turned out." 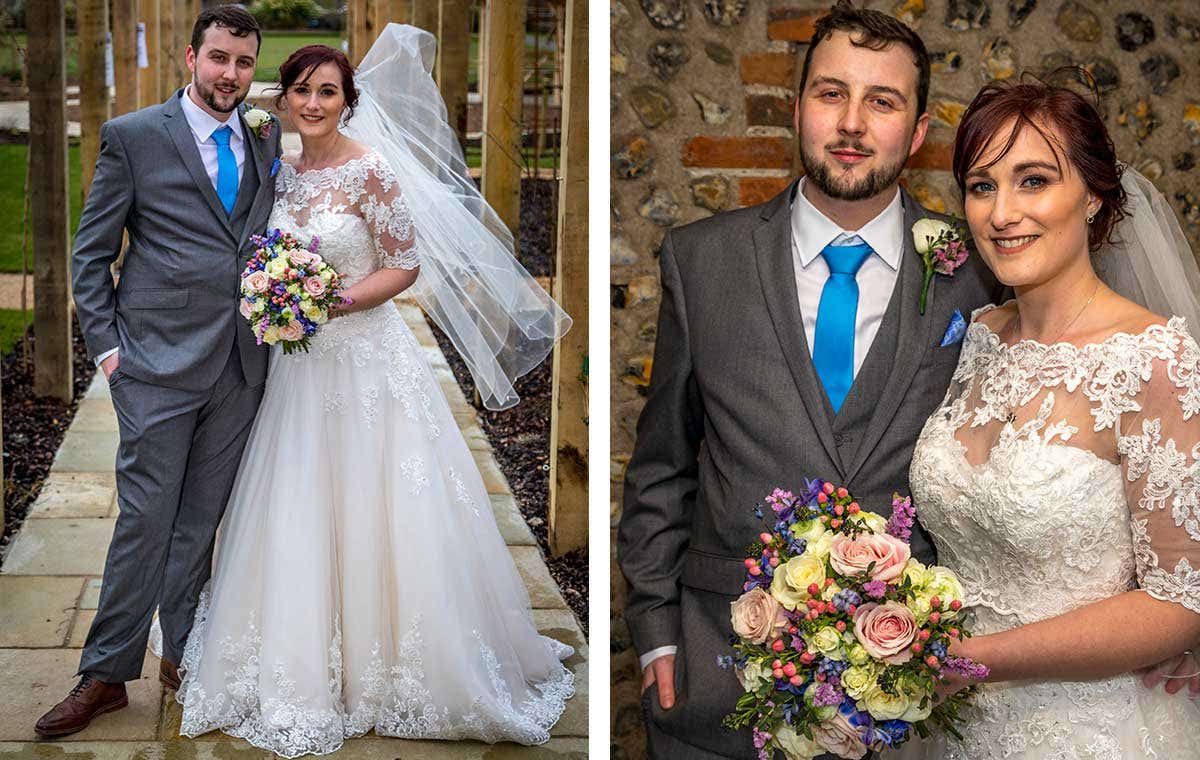 The couple married at Field Place, a manor house wedding venue in Worthing, on a chilly afternoon in March 2018. “I had been there years earlier for a friend’s wedding and really loved how it looked,” says Joanna. “It’s classy, stylish and beautiful, and the gardens had been renovated by the time we got married, so it looked really lovely outside too.” 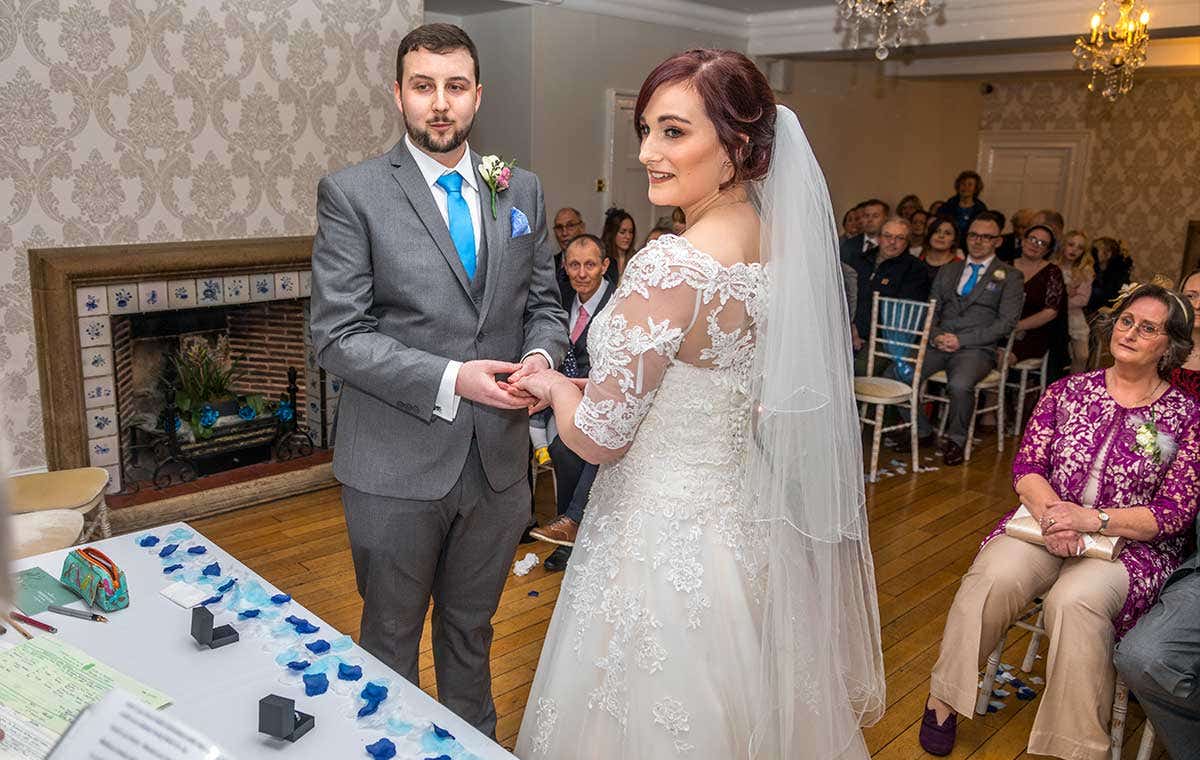 Joanna and Craig love to play video games together, so they had classical renditions of music from some of their favourite games during the ceremony. “My father walked me down the aisle to an acoustic guitar version of my favourite song from my favourite game, ‘Memories of Life’ from Final Fantasy 9,” says Joanna. “It was so wonderful. Craig got a tear in his eye when he saw me, I think that might be my favourite part of the day! We didn’t have any readings or songs, as we just wanted a simple and quiet ceremony. We played other classical versions of song from games during the signing of the register too. It really brought one of our shared loves into the day in a classy and low-key way, we were so pleased at how it turned out.” 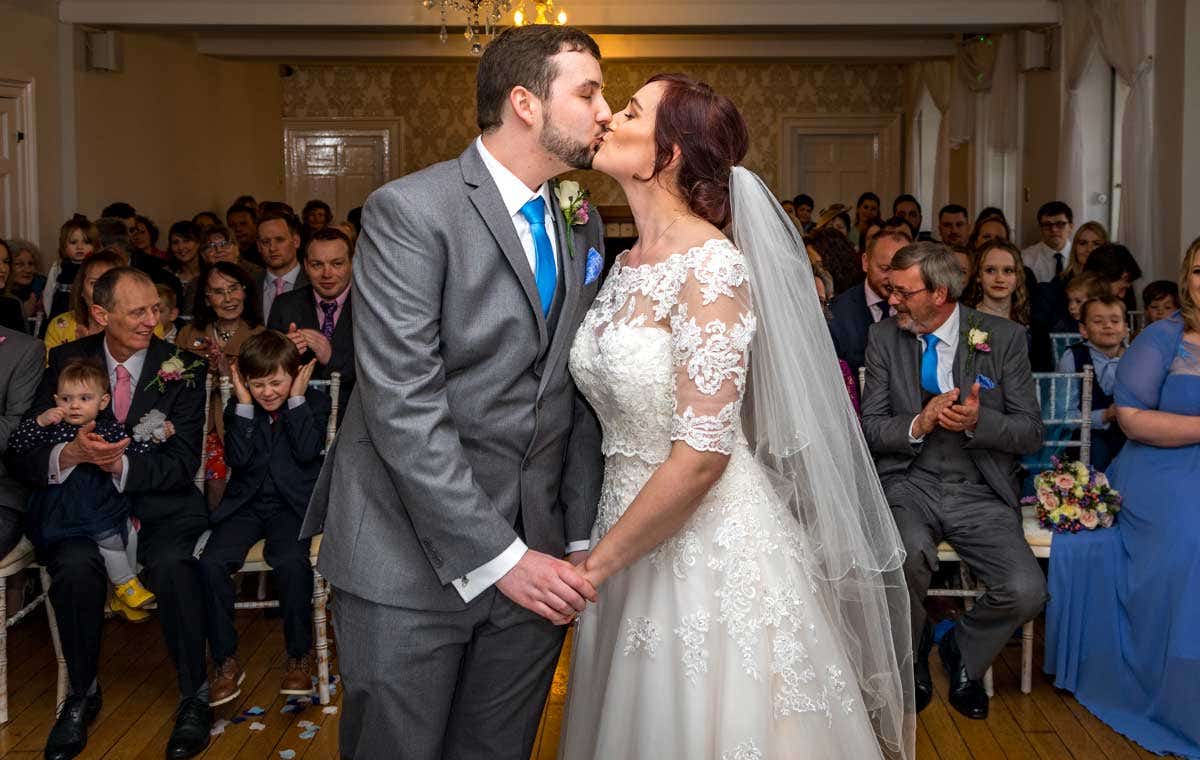 People mingled as the photographs were taken. “Then we had a nice big sit-down dinner with everyone we loved,” says Joanna. “It was absolutely delicious. There was also cake and a buffet of doorstop sandwiches for after the first dance, and then there was dancing until midnight."

Joanna’s favourite colour is blue. There were blue organza bows on the chairs and blue rose petals and crystals scattered on the tables around the centrepieces. The couple made the centrepieces themselves, using teardrop-shaped glass terrariums, coloured crystals, figures from their favourite games and fairy lights, which also worked as nightlights for the evening. “Everyone complimented us on how well made they were, we were very proud!” says Joanna. “Our favours were little Mario question mark boxes and we had different flavours of Millions sweets in potion bottles. We also had a treasure box for all our cards and a photo guest book.”

A work colleague made the cake, which had three tiers with vanilla buttercream on the bottom, chocolate in the middle and white chocolate on the top. It was decorated with blue roses and had a custom cake topper on the top of a man and woman dancing, the couple’s new married name, and two little cats. “We are huge cat lovers and we wanted to include our two in the day somehow,” says Joanna. In the evening there was a magic mirror, so guests could take silly photos with props and get a print out to take home with them. “A lot of people took a liking to the sombrero hats provided,” smiles Joanna. “A few of us ended up on the dance floor with them!”

And, for the perfect end to the perfect manor house wedding, it actually started snowing during the evening. “It really was quite magical to see the fountain and house all lit up and surrounded by snow,” says Joanna. “It was such a good day.”

Did your wedding have the wow factor like our manor house wedding feature? If you would like to be a part of our real weddings feature send your favourite photo to info@wed2b.co.uk and we’ll be in touch!