This happy couple chose a bright and beautiful day for an October wedding! Our WED2B Real Weddings Bristol feature reveals more:     A chance meeting Suzanne and John met in Majorca in October 2013. “I was going through a... 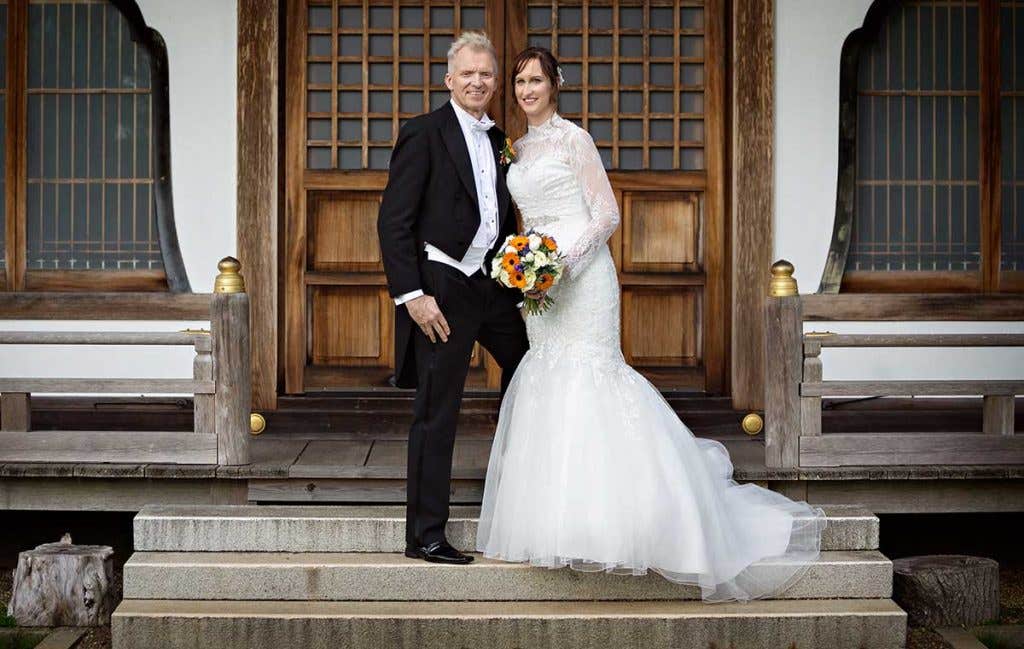 Suzanne and John met in Majorca in October 2013. “I was going through a bit of bad time and fancied a holiday, but none of my friends could take time off to come with me,” says Suzanne. “So I went on my own and met John, who was working as the hotel’s entertainment manager, on the first day. We started chatting and he guessed what I did for a living (I work in security), which no one has ever done before! Later he invited me out for drinks and we clicked right away. I thought it was just a holiday romance but when he came home he travelled from Wales to Newbury to see me, which is over three hours by train! It wasn’t long until it turned into a relationship and we moved in together. Four years on we’re married!” 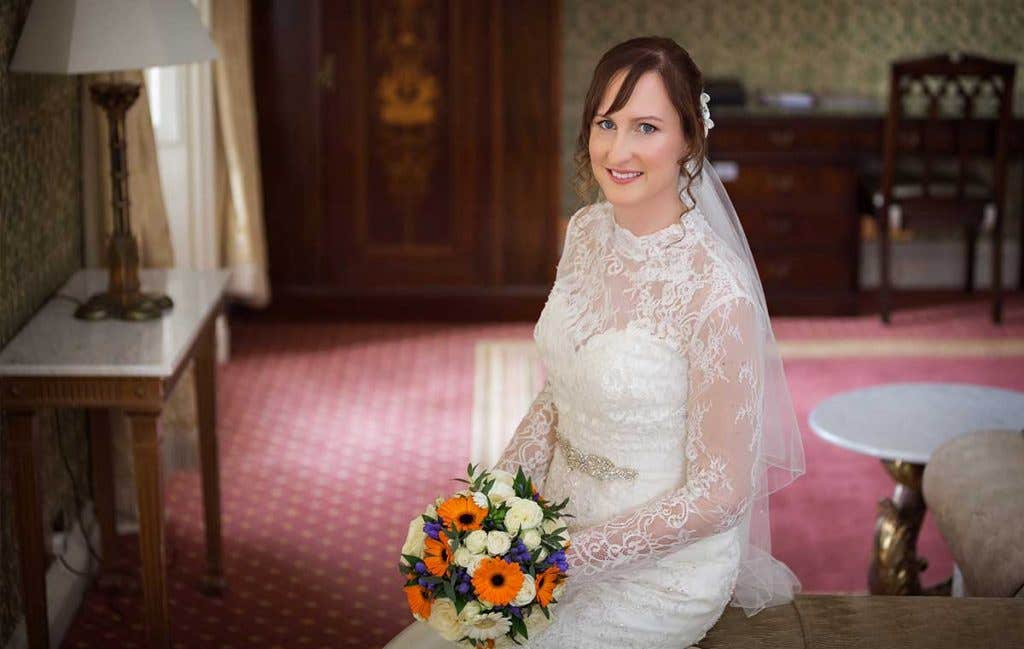 The couple got engaged two years later and started to plan their big day. “I visited WED2B Bristol with my Mum, twin sister Sarah and younger sister Kristina,” says Suzanne. “When I saw the shop I was amazed! It was well-presented and welcoming, and the staff were great. I didn’t feel pressured to buy at all, and even though I felt overwhelmed at times the assistant reassured me and reminded me not to rush into a decision and to try on as many dresses as I wanted.” 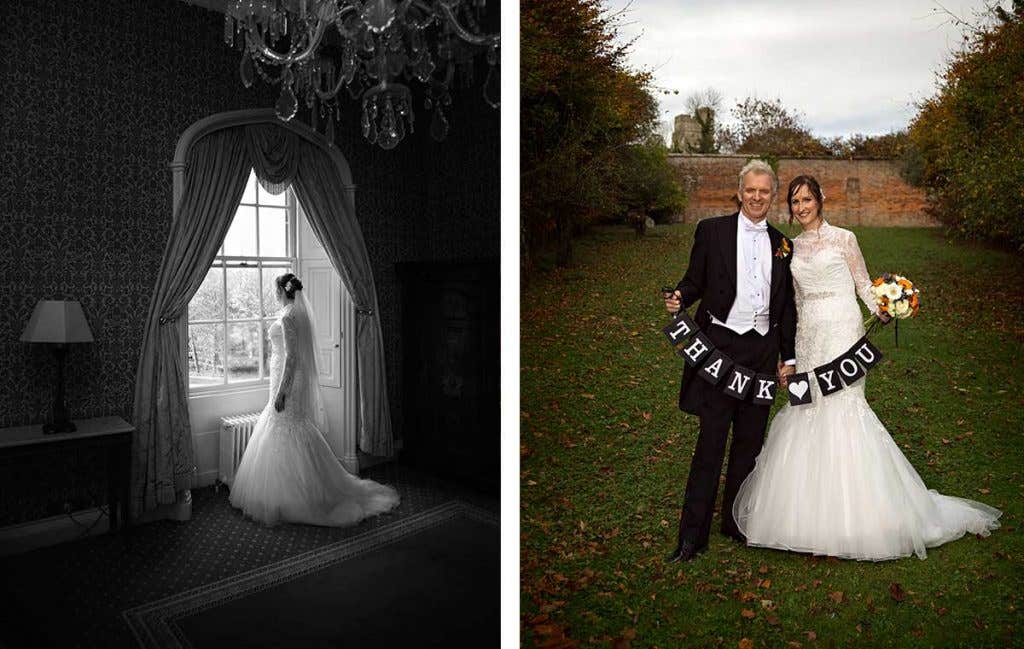 Suzanne went in thinking she wanted a ball gown. “I tried on Gracie in ivory, which was a fishtail, and I loved it! I obviously then tried some ball gowns on, but I didn’t feel they flattered my figure. So I went back to Gracie and I loved it even more! The shape and fit made me feel a million dollars. I bought my gown there and then and couldn’t wait to wear it again. It was hard to keep it a secret from John!” Suzanne also bought a Caprice jacket, a fingertip-length veil, an underskirt and an Amixi belt to complete her look. 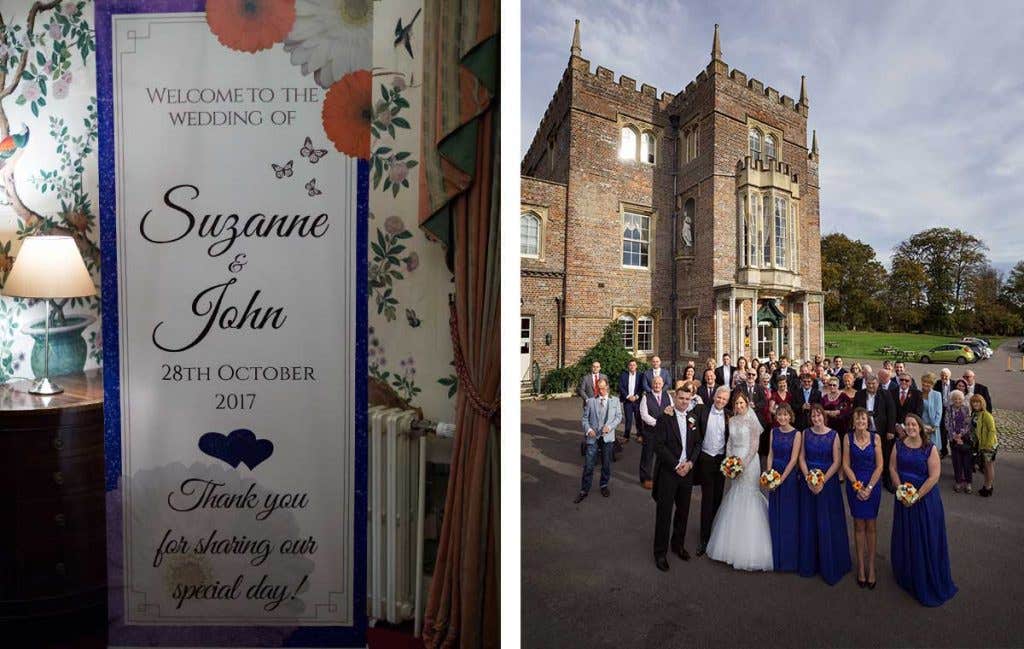 The couple booked Donnington Grove Golf and Country Club in Newbury, Berkshire for their wedding in October 2017. “When we first visited we fell in love,” says Suzanne. “It reminded me of a castle and it’s every girl’s dream to be a princess on their wedding day! The grounds are spectacular with a very picturesque entrance with swans and a bridge going over a lake. We also loved that we would have sole use of the venue for our day.”

The ceremony was held at 1pm in the venue’s Cloudy Room. “My Dad, Graham, walked me down the aisle to ‘From This Moment’ by Shania Twain,” smiles Suzanne. “My favourite moment was when John turned around and looked at me - I fell in love all over again. John’s sister Ann read ‘An Extract from the Indian Marriage Ceremony’ and ‘Sonnet 116’ while my sister Sarah read ‘Maybe’ by Anon. We also had a couple of songs from Riverdance playing for the signing of the register, as we both love Irish dancing and Michael Flatley. For the exit song we had ‘I’m a Believer’ from Shrek. It was our fun song to celebrate getting married and John loves Shrek!” 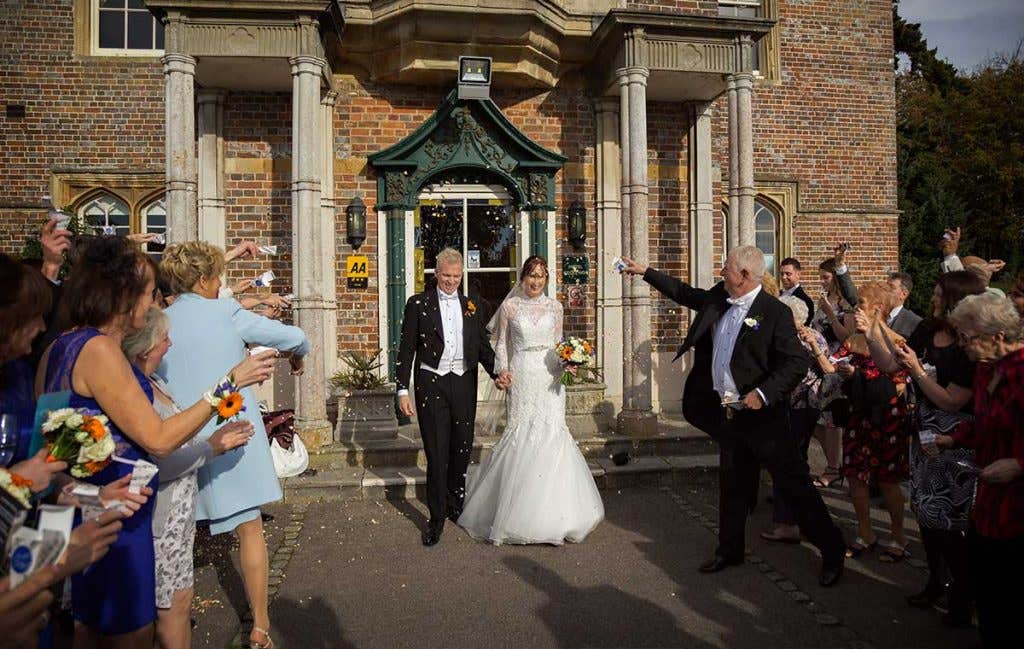 Afterwards, there were photographs, canapés and prosecco before guests sat down to the wedding breakfast. “We had a ‘sweetheart’ table for just John and I,” says Suzanne. “This was just easier due to our extended family, and also allowed us to take in the day together while we ate. The meal was delicious! We had gravadlax of salmon to start, filet of beef for the main, and white chocolate and raspberry cheesecake for dessert.” 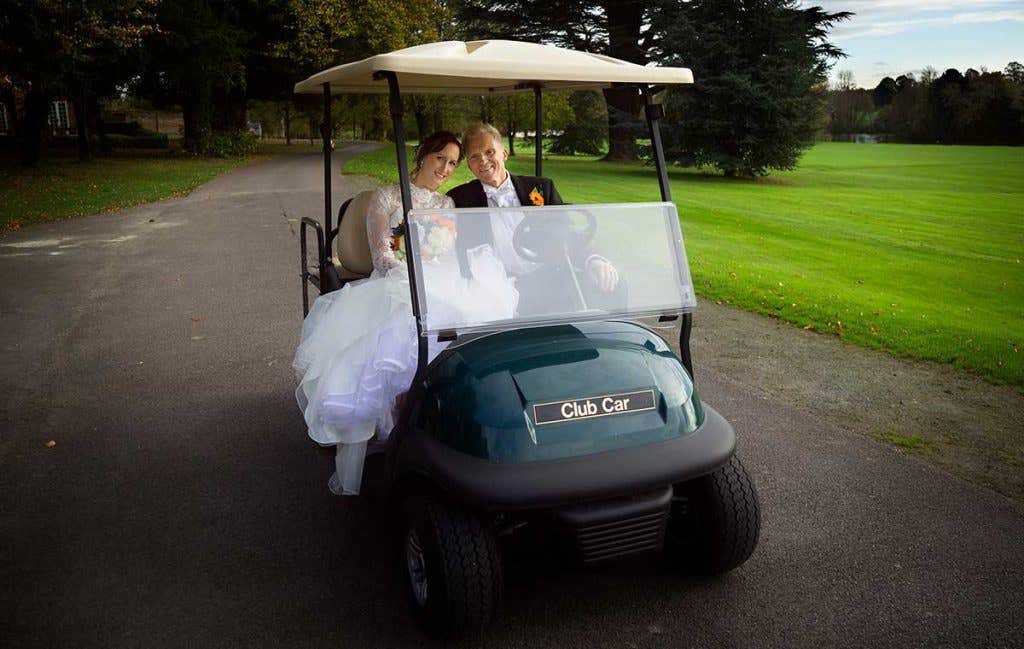 The colour theme for the day was royal blue and orange and there were royal blue table runners with glass fish bowls as centrepieces filled with water balls and orange Gerberas. There were also lots of butterflies dotted around our venue, on the table numbers and as place names on the wine glasses. The favours were Terry’s Chocolate Orange Segsations and tables were scattered with blue and clear crystals. “We also bought blue and orange paper lanterns for the marquee,” says Suzanne. “The seating plan was a birdcage with table settings clipped on with butterfly pegs. I also made ‘Mr  and Mrs’ Hedgehogs out of paper books to represent me and John, as our surname is Hedgecock, Plus John also got called Hedge or Prickles growing up!” 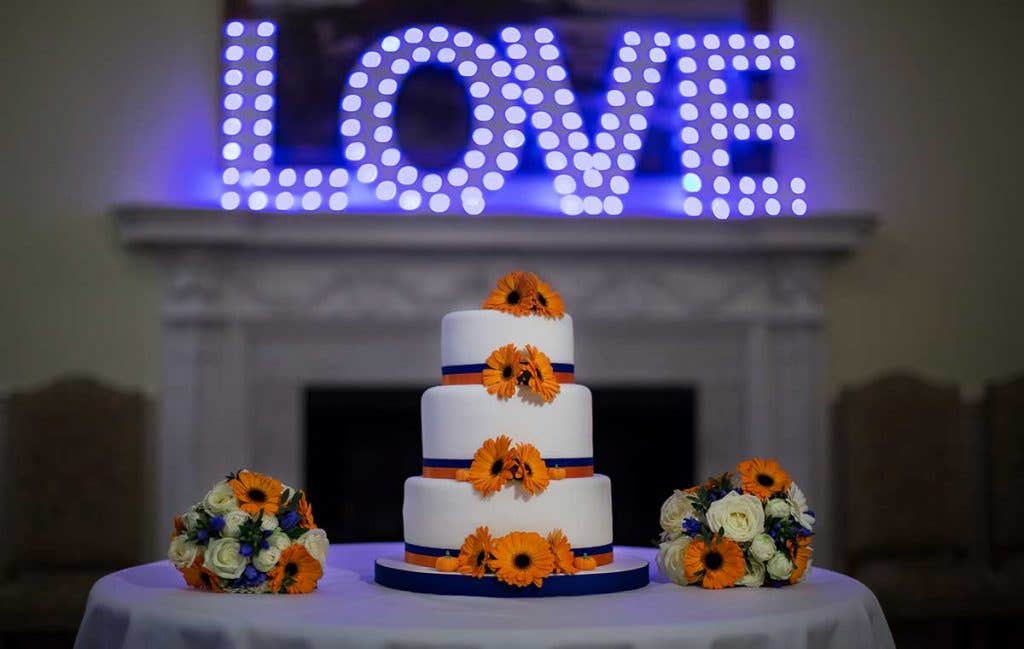 The three-tier cake had a top tier of fruit cake (John’s favourite), a middle tier of chocolate sponge with chocolate orange ganache and, at the bottom, a traditional vanilla sponge with a winter berry jam filling. On the top there were two small pumpkins to represent the newlyweds and to go with the autumnal date.

“John’s friend, Eleazar, is a professional singer and he sang our first dance song, Luther VanDross’s ‘Here and Now’,” says Suzanne. “It was amazing and such a personal touch that he was able to sing that for us. Everyone loved it! We also had Irish dancers for the evening entertainment to tie in with the Irish/ Riverdance element. I found a dance school nearby in Swindon who performed a few numbers taken from Riverdance, which was fantastic. Then we had a buffet and a disco. We danced the night away with all the special people in our lives!” 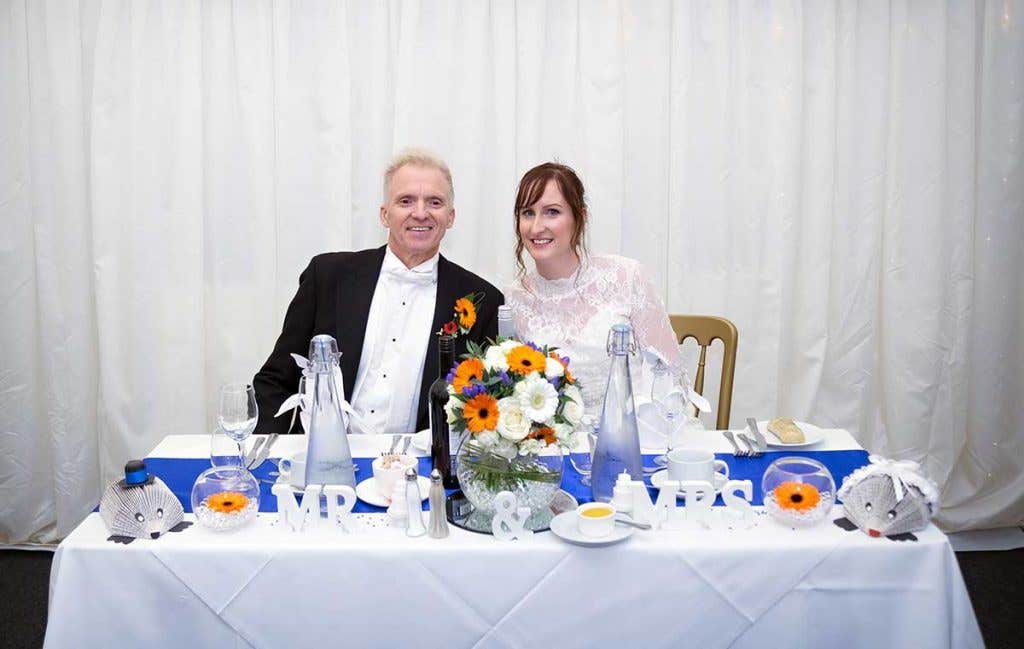 The most memorable moment…

“I remember after the vows the registrar said, ‘I now pronounce you man and wife’ and John said, ‘wow’ and was full of emotion,” smiles Suzanne. “It was the most wonderful feeling. He was full of love and that embrace meant the world. It was the start of our next chapter together!”

Did your wedding have the wow factor like our Real Weddings Bristol feature? If you would like to be a part of our real weddings feature send your favourite photo to realbride@wed2b.co.uk and we’ll be in touch!