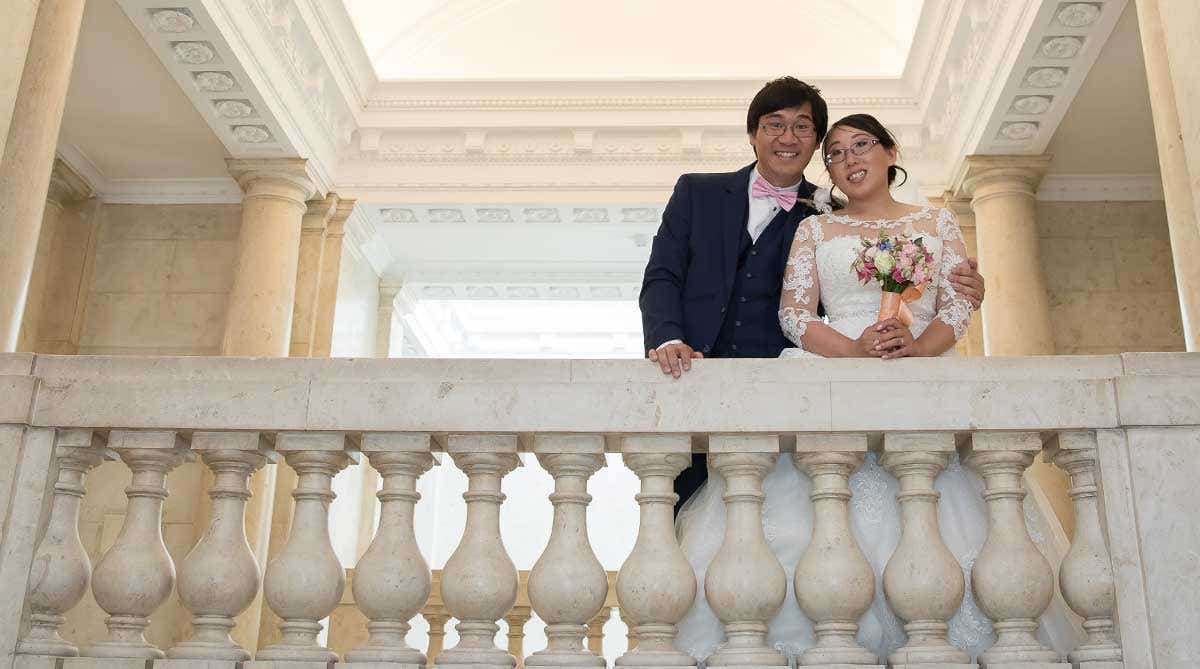 Sin Mei and Wai-Yee met online and went for French toast for their first date. “On our wedding day, we named a table French toast in memory of this,” smiles Sin Mei. “Also, the day after our wedding, we went back to the same café for breakfast and told the staff that we’d dined there on our first date and now we were married!”

Wai-Yee proposed in December, next to the couple’s Christmas tree. “He told me that 28 years ago on that very day he’d arrived in the UK from Hong Kong and he wanted to be my early birthday present,” says Sin Mei. “We were going to Paris a few days later for my birthday so I was quite pleasantly surprised he proposed before the trip. I’m happy he did it in December too, as it’s my favourite month because it’s both my birthday and Christmas.” 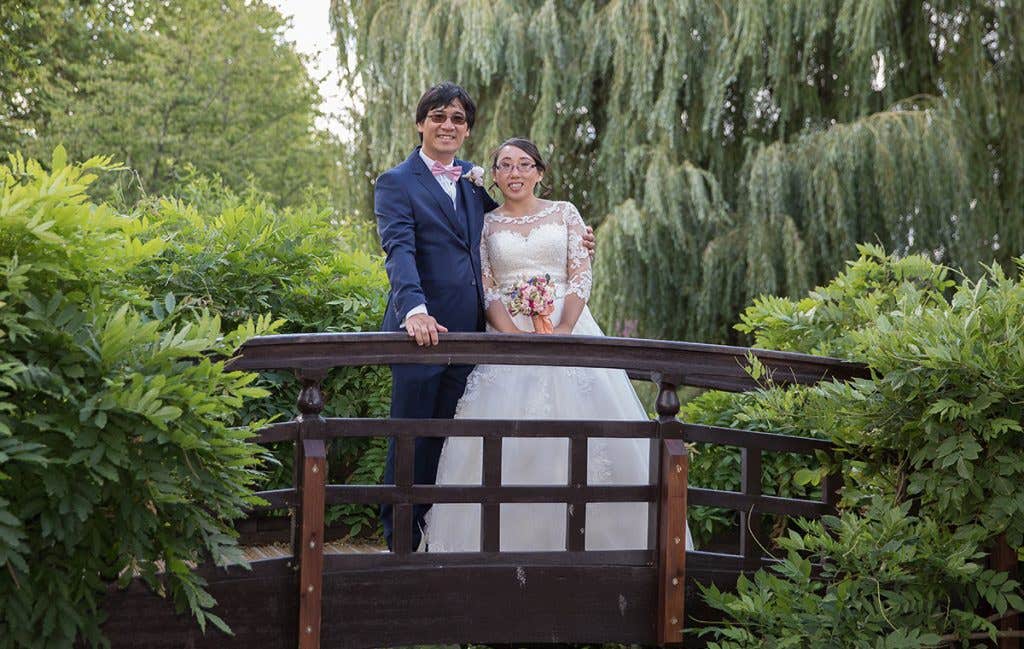 Sin Mei discovered her dream dress in WED2B’s Bristol store. “I tried on a few but the one I liked the most was Breanna,” says Sin Mei. “I had spotted it online the night before and I was excited to see how it would look on". Sin Mei knew she wanted a dress with sleeves and a nice heart-shaped neckline and had already spent time browsing on Pinterest, Instagram and Facebook for inspiration. "I went to some wedding fairs and didn’t really like the dresses I saw but I instantly fell in love with Breanna. I felt like a princess when I had it on and bought it the same day.” 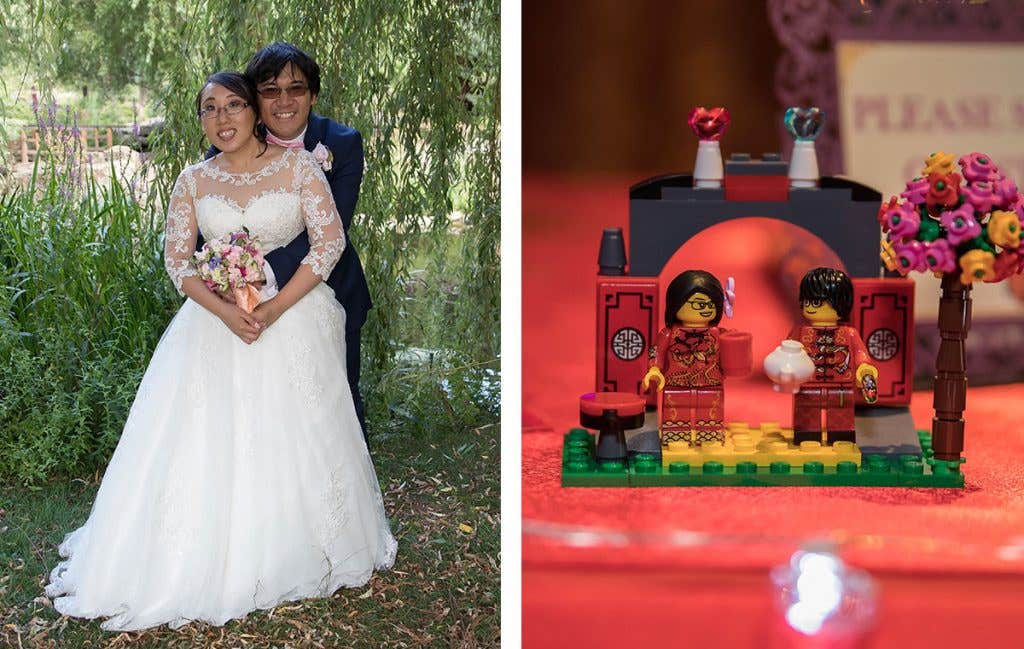 The couple married at the Old Marylebone Town Hall in London. “We wanted to get married in London, as it’s where we first met,” says Sin Mei. “When I was looking at potential venues, I saw that it was being refurbished, so I thought it would be amazing to get married there afterwards. We went to visit the venue during an open evening and, given its history and the proximity of it to our banquet restaurant, we decided to book it. We wanted to go for a simple ceremony with our family and close friends.” In the evening, there was a banquet reception at a Chinese restaurant called Phoenix Palace. “I used to go there to eat with my family so it has a special place in my heart,” says Sin Mei.

The wedding was held on 8th August 2018. “It’s a significant date, as the number eight is considered very lucky in Chinese culture,” says Sin Mei. “The number eight is a perfect symmetrical shape and both halves mirror themselves perfectly. Perfect symmetry lends itself to perfect balance, which is considered the ideal in Chinese culture. A lot of the guests commented on the date when we sent our invitations out, as it’s considered an ideal date to get married. I am happy we managed to secure the date at our venues.” 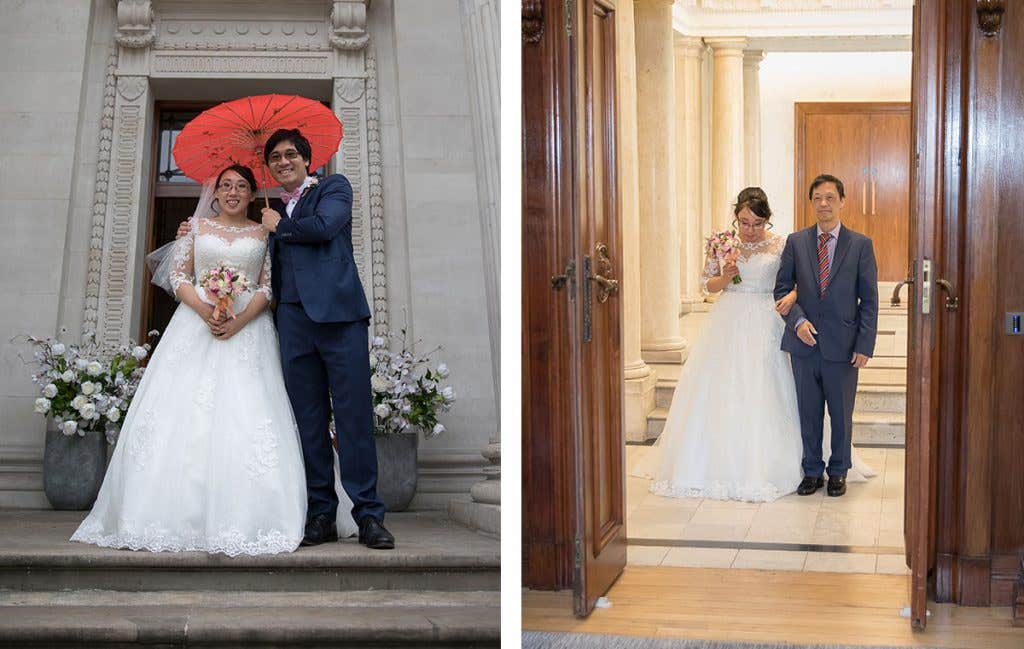 During the ceremony there was a harpist who played Disney songs to reflect Sin Mei’s love of Disney and she walked down the aisle to ‘Beautiful in White’ by Westlife. “When I first listened to the song a number of years ago I knew I wanted it on my wedding day, if I ever got married,” says Sin Mei. “I walked down the aisle with my Dad and was tearing up as I started walking. My favourite memory was seeing my husband and also listening to him while he read out his personal vows, promising to be my forever companion.” 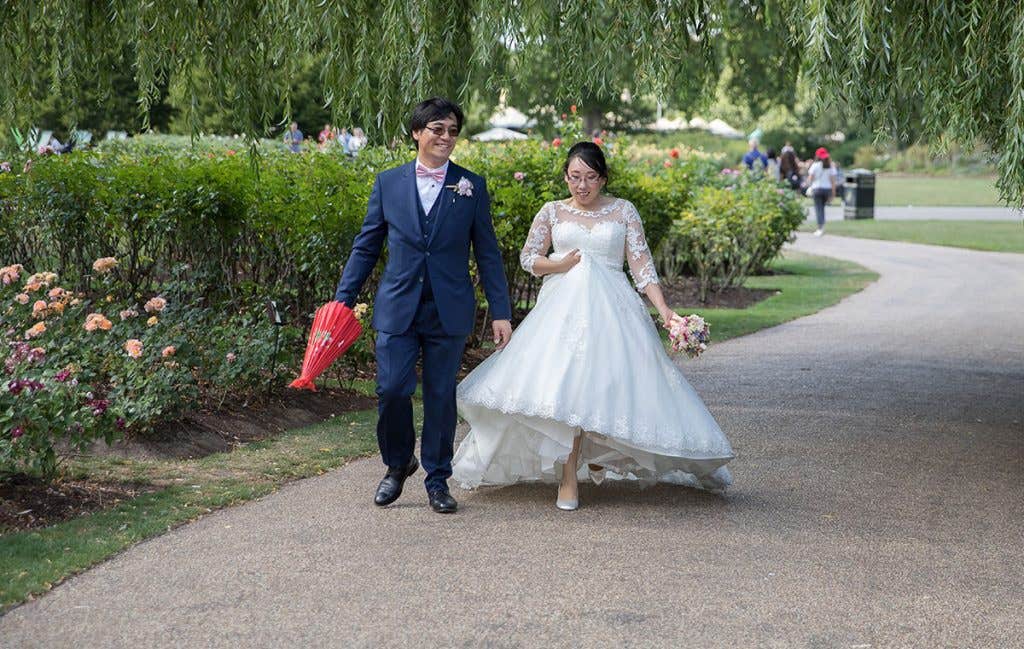 After the ceremony there were some group photos outside the town hall before a car arrived to take the wedding party to Regent’s Park for a photo session. “We had some pictures taken with the bridesmaids and groomsmen with bubble guns to create a bubbles effect,” says Sin Mei. Then everyone made their way to the restaurant for the tea ceremony. 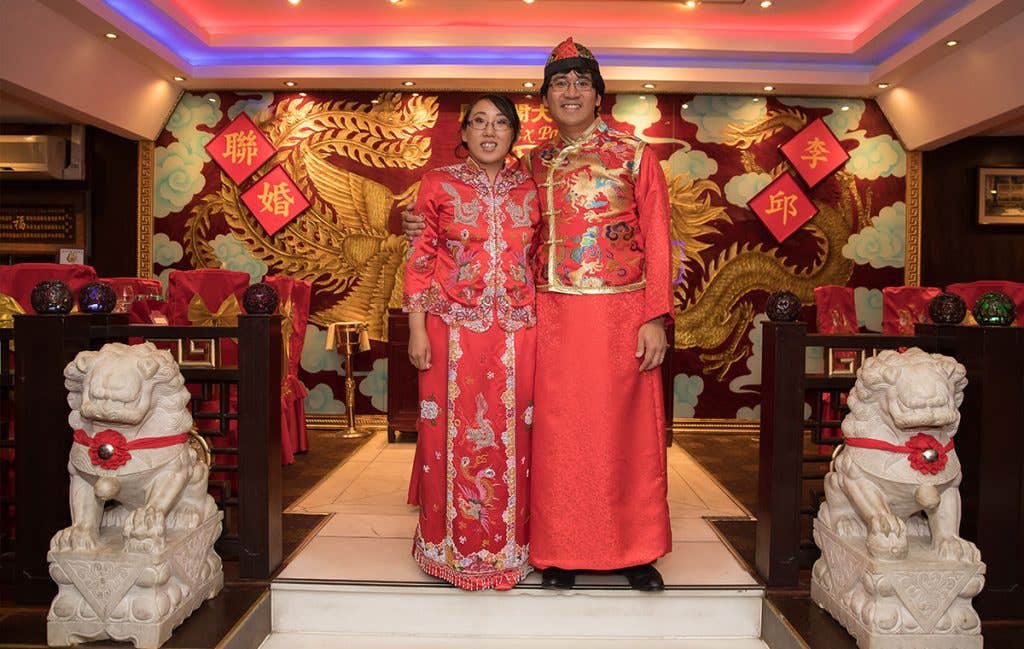 “It was a Chinese style wedding and the tea ceremony is to show respect and gratitude to our parents for all the years of love and care,” says Sin Mei. “I got changed into a Chinese dress and we gave tea to our families and they gave us their blessings. As part of the tradition, some of them also gifted us with gold jewellery to wear.”

After the tea ceremony, Sin Mei changed back into her bridal dress. Then everyone sat down to a 12-course banquet meal, including lobster, soup, fish, noodles and rice. “They all have symbolic meaning, either to bring the newly wedded couple prosperity, good health or longevity,” says Sin Mei. The wedding cake was a two-tier cake with assorted mini cupcakes from Crumbs and Doilies. “We went for the Neapolitan top tier (chocolate, vanilla and strawberry sponge with vanilla buttercream and a chocolate drip) and strawberry milkshake base tier (malted strawberry vanilla sponge, strawberry drip, buttercream icing and piped milkshake decoration),” says Sin Mei. “We went to the Soho store do some cupcake tasting and were really impressed, so we decided to get Red Velvet, Caramel Pretzel and Buttered Popcorn flavoured mini cupcakes too!” 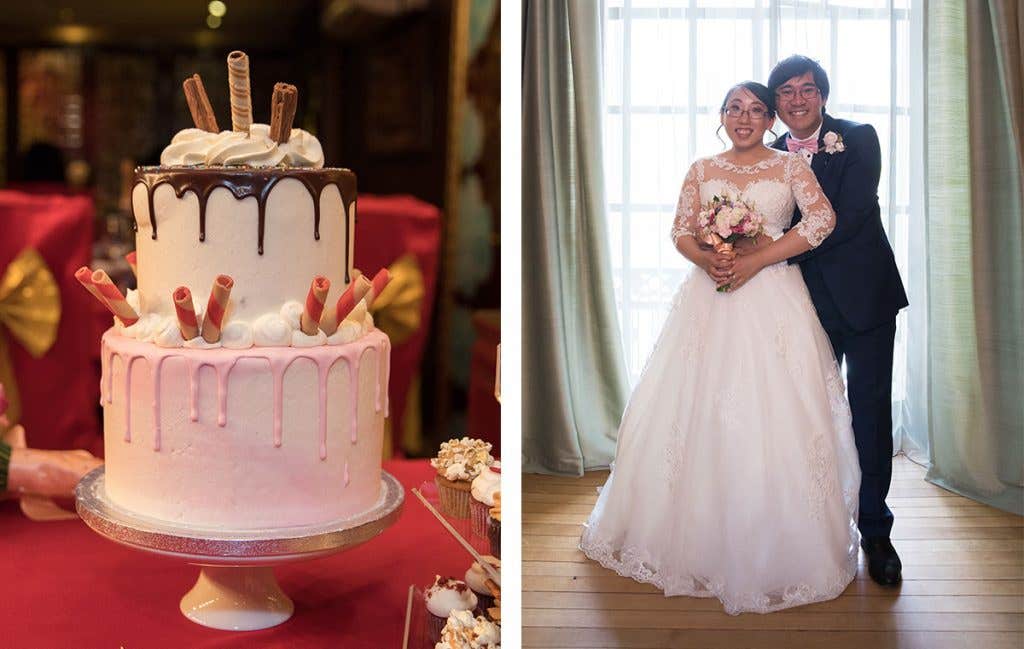 The wedding had a food theme and all the tables were named after the newlyweds’ favourite foods. “We also had a little story for our guests to read at each table related to each food item,” says Sin Mei. “My favourite colour is purple so we used purple for some of the décor. We also love collecting Lego, so we gave Lego to the kids as favours. For the main wedding favours, we gave our guests seeds in a pot so they can grow their own plant. We spend a lot of time growing plants and vegetables in our house! Some guests received tea as I love drinking tea”. Cows were also a theme for the invitations and signage as Sin Mei and Wai-Yee were both born in the Chinese zodiac year of the Ox.

“One of my most memorable moments was walking down the aisle with my dad but I was also emotional and touched to see how happy our parents were during the wedding,” says Sin Mei. “We both decided to have the Chinese style wedding banquet for our parents. I was also very happy to see so many friends and family I haven’t seen in a long time. Some had travelled very far to attend. The whole day was very fun for us. I enjoyed wearing my dress and having my hair and make-up done. I felt like a princess for the whole day marrying her real-life prince and having her happily ever after!”

Did your wedding have the wow factor like our Chinese style wedding feature? If you would like to be a part of our real weddings feature? Send your favourite photo to real.bride@wed2b.co.uk and we’ll be in touch!