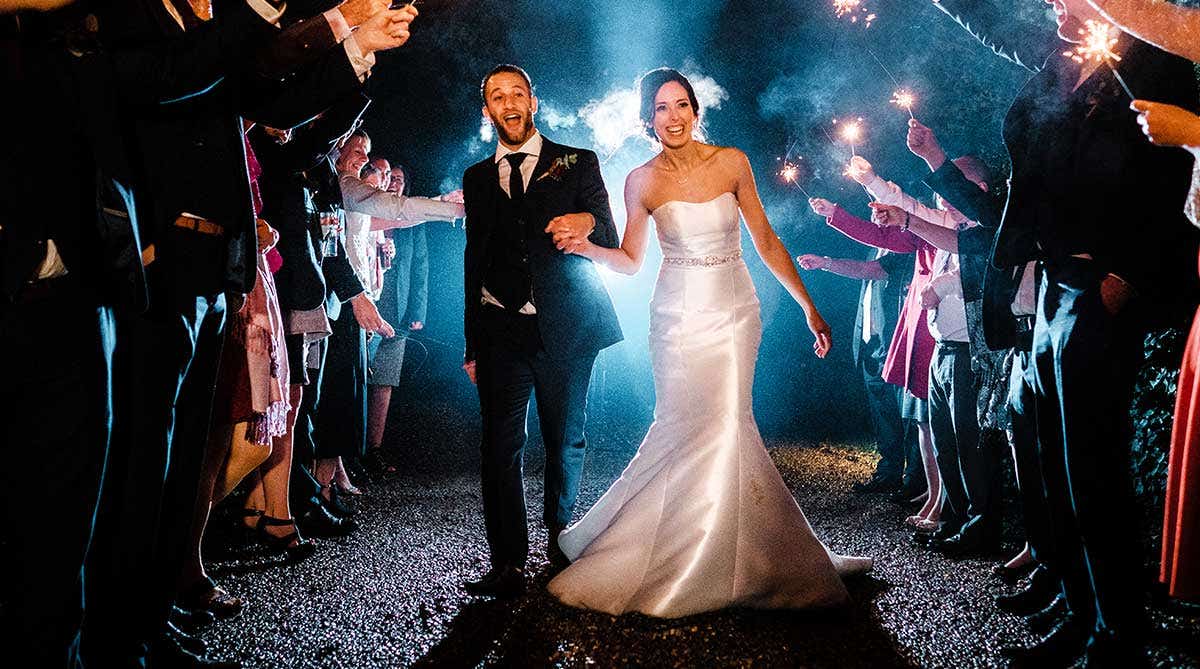 Emma and Gee met at the wedding of one of Gee’s best men, six and a half years ago. “As I was leaving, Gee asked the bride if she would be a bridesmaid at our wedding!” smiles Emma. “Then proceeded to tell me that we’d discuss it later! We messaged every day the following week and realised we had loads in common. We met up at a pub in Blackheath a week after the wedding, just as friends, but over the following weeks we couldn’t deny there was definitely a spark between us. We’ve been inseparable ever since!” 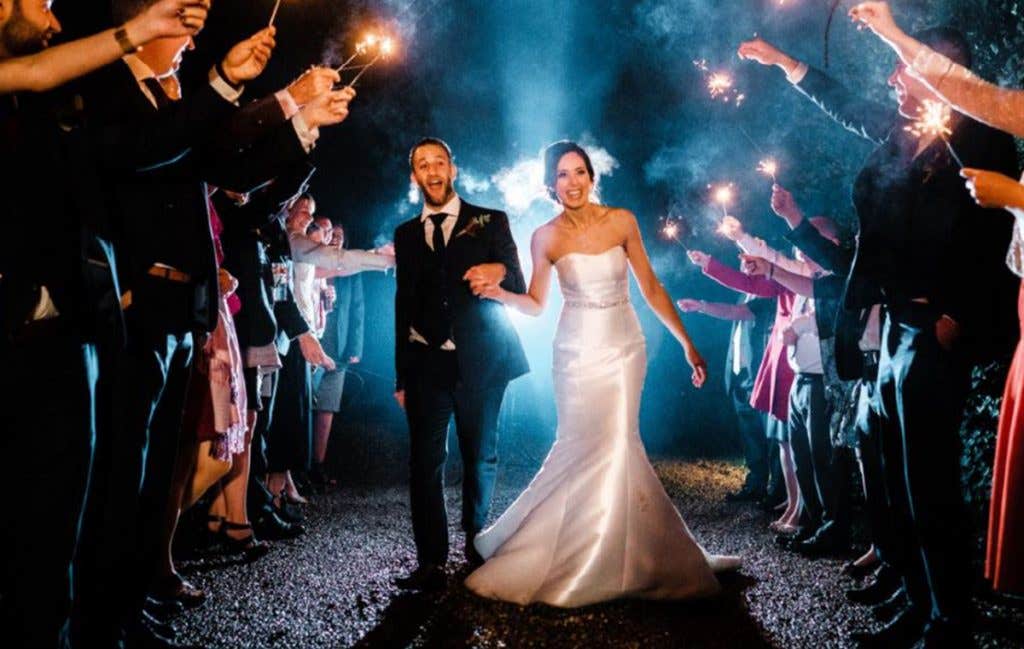 The big question in the Big Apple

The couple got engaged in New York on the 1st December 2017. “We were on the 102nd floor of the Empire State building on the sunniest day when Gee proposed,” says Emma. “We’d wanted to go to New York for years and were on a dream, five-day trip. We’d been to Paris a few weeks before and everyone expected him to propose there. People kept asking me where the ring was! So I thought New York would be too obvious but he told me that was why he chose it! Afterwards we had a boat trip planned, from the West side to the East side and back again, so we got to see the most amazing sunset together.” 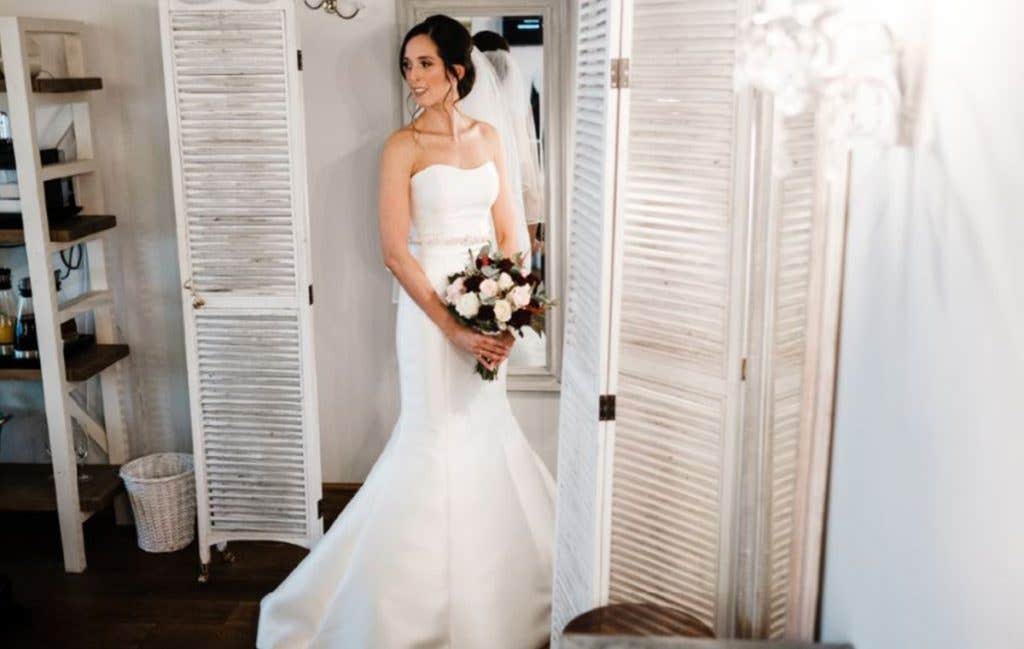 Emma visited WED2B Bromley in February 2018. “I went with my Mum, my sister and my best friend, who came down from Yorkshire especially,” she says. “As it was my first shopping trip I didn’t think I would find my dress that day. I hadn’t even decided on the type of dress I wanted. I picked out my dress mainly so I could try out a new silhouette and material. It was Dolce by Anna Sorrano and as soon as I put it on we all knew it was the one! I loved the material and the shape of it. It was very simple, classic and totally me. I knew Gee would love it too, so I bought the dress that day and cancelled my afternoon appointment at a different shop. I also added a belt, for a bit of sparkle, and an underskirt for some extra volume.” 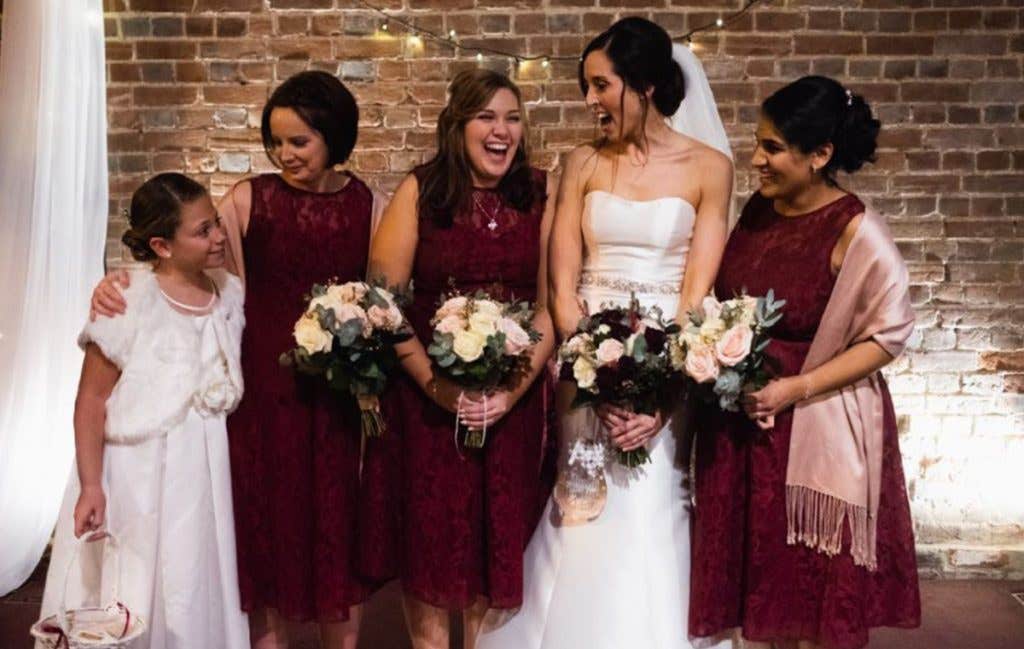 The couple married at Cooling Castle Barn in Cooling, Rochester. “We spotted it early on in our search but assumed it was too expensive,” says Emma. “Although, after looking at other barn venues, we realised it was actually priced really well. Nothing compared to it, even before we’d been to see it. As soon as we got there we knew it was the venue for us. It just felt right. It was everything we were looking for and we could imagine ourselves getting married here. At the end of the viewing we looked at potential dates and they had a cancellation for an autumn wedding on Friday 16th November 2018, which was only nine months away. We checked with friends and family that most of them could make it, confirmed the date with the photographer, then booked it!” 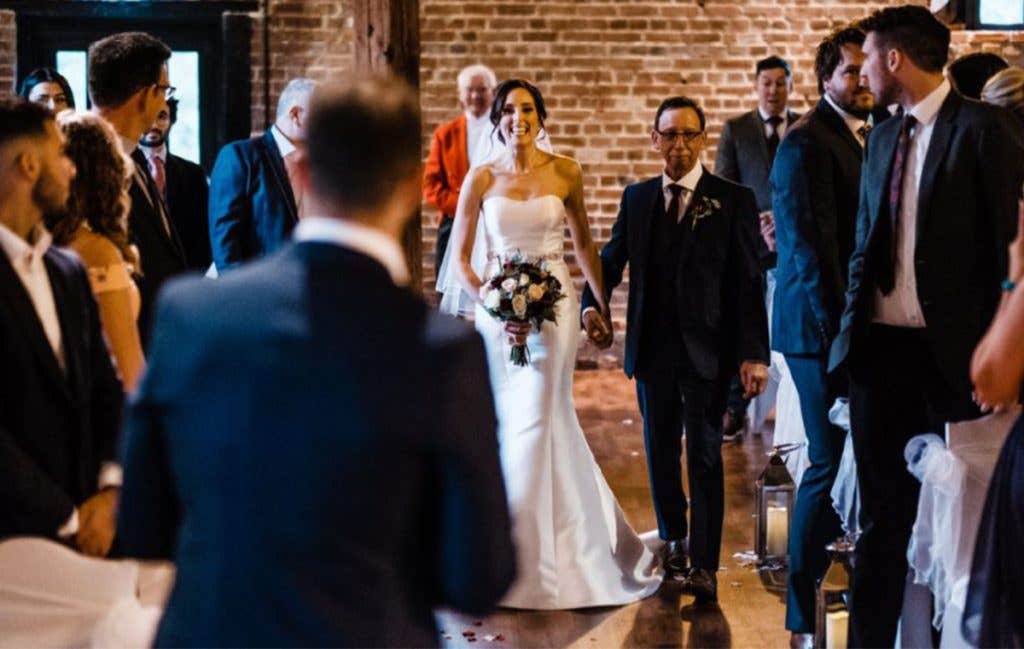 The ceremony was held in the venue’s Fathom Barn. “There’s a lovely wooden staircase that my bridesmaids and myself came down,” says Emma. “My Dad walked me down the aisle to ‘A Thousand Years’ by Christina Perri. We also had two readings, one by one of Gee’s oldest friends, Charlotte, and one by my older sister. Walking down the aisle towards Gee, after having the night apart, we were both so excited to see each other. I loved every moment of the ceremony and tried really hard to take it all in as much as possible.” 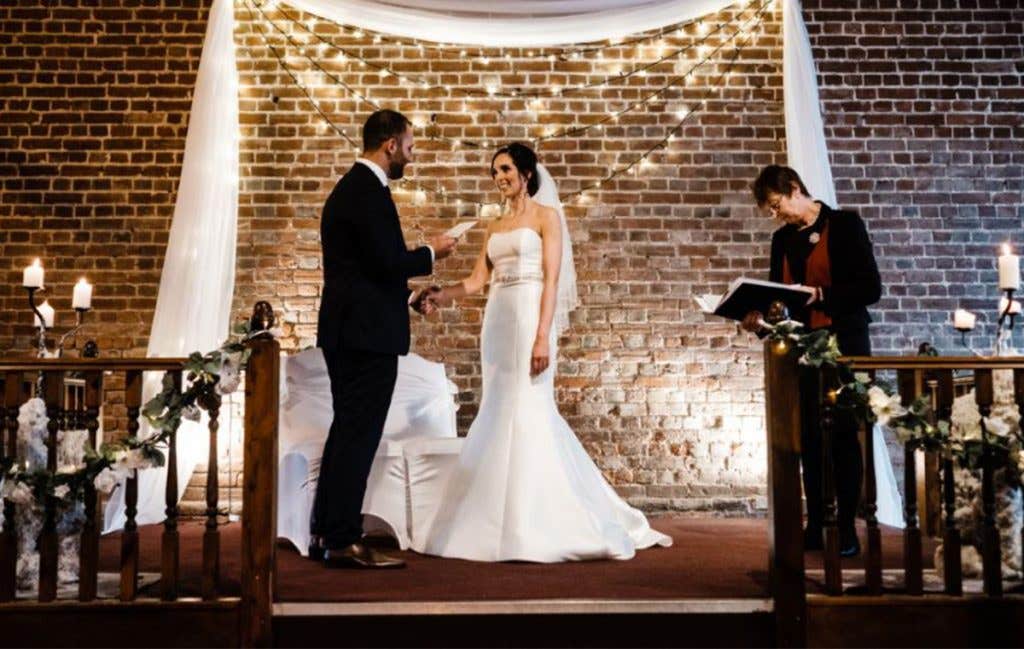 “As it was November, we were aiming for a rustic, autumn wedding feel for the day,” says Emma. “We had more fairy lights added to the venue, used wood rounds with jugs and jars on them for the centrepieces and there were pine cones for the tables too. There was also a large ‘E' and a heart and a ‘G' on the balcony overlooking the reception area.” The naked wedding cake had three tiers with flavours of lemon, vanilla with strawberry jam and chocolate. It was decorated with fruits and the florist also added some roses and pine cones around the stand. “We had a personalised wooden cake stand with our initials and the date of our wedding carved on it,” says Emma. 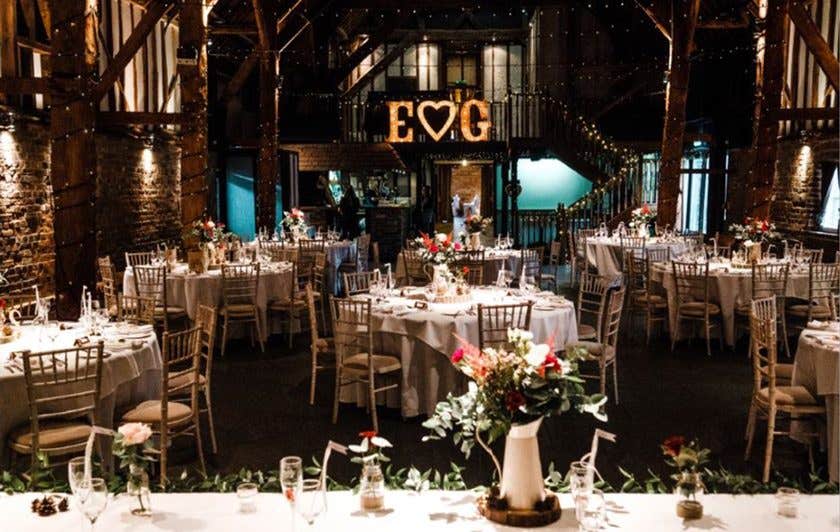 After the ceremony the newlyweds did a confetti shot with their guests before the drinks reception, where everyone enjoyed mini fish and chip cones instead of conventional canapés. “During the photos Gee gave me a fireman’s lift over the grass to get me to a different area of the grounds, which was a bit hairy for me but hilarious for everyone else!” laughs Emma. 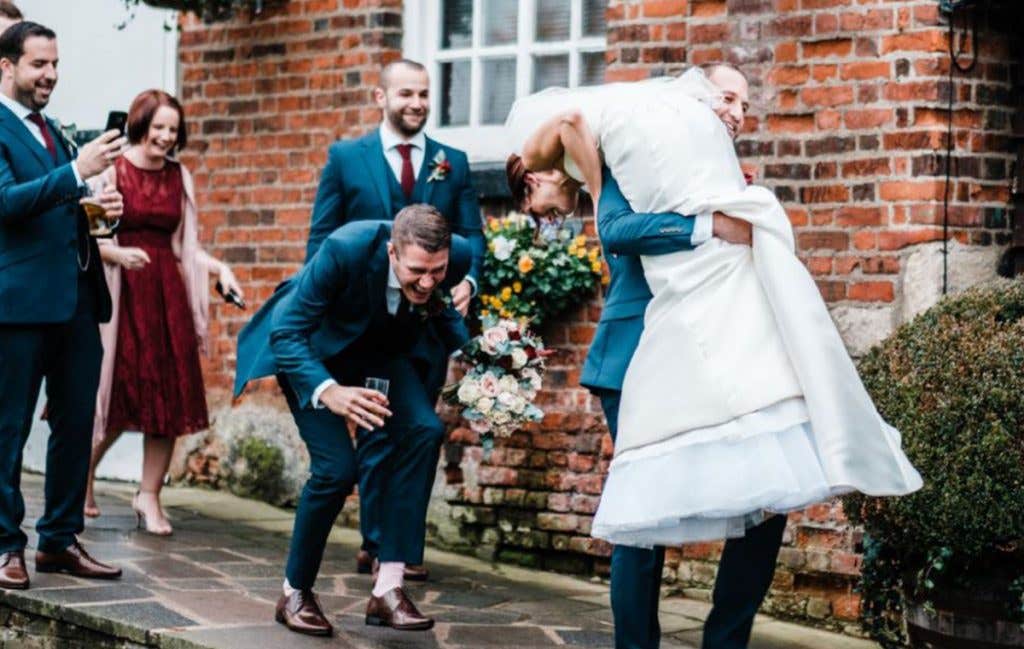 This was followed by a three-course, sit-down meal. Later in the evening there was also a BBQ buffet. “Once the evening guests arrived, I had my dance with my Dad, then Gee and I had our first dance to ‘God Only Knows’ by the Beach Boys,” says Emma. “Everyone else got involved half way through the first dance, so the party continued when the band started straight after. We even squeezed in a sparkler photo, since it was November!” 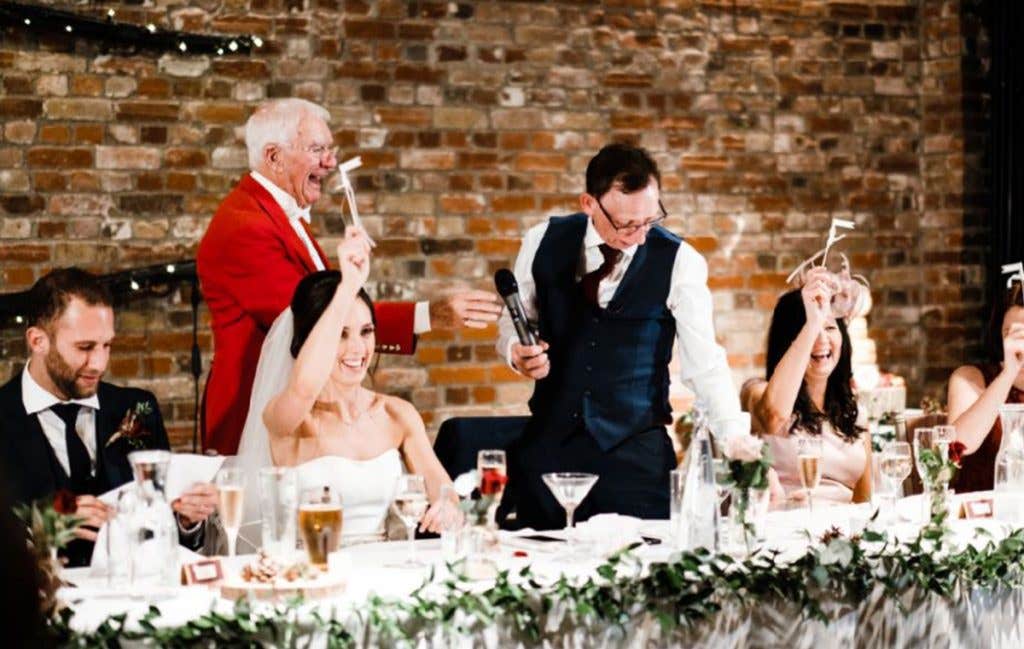 Light-Up Letters: Light It Up (lightitupuk.co.uk)

Make-Up and Hair: Hair and Make-Up by Zara (hairandmakeupbyzara.co.uk)

"The biggest tip I can give it to keep things simple and do what makes you both happy! Enjoy every second as it flies by so quickly. We hired a videographer and my hubby-to-be was a bit on the fence about it. Bt post-wedding we are both so happy we had one as you get to see things you don't see and experience on the day and you have a lasting memory to relive." 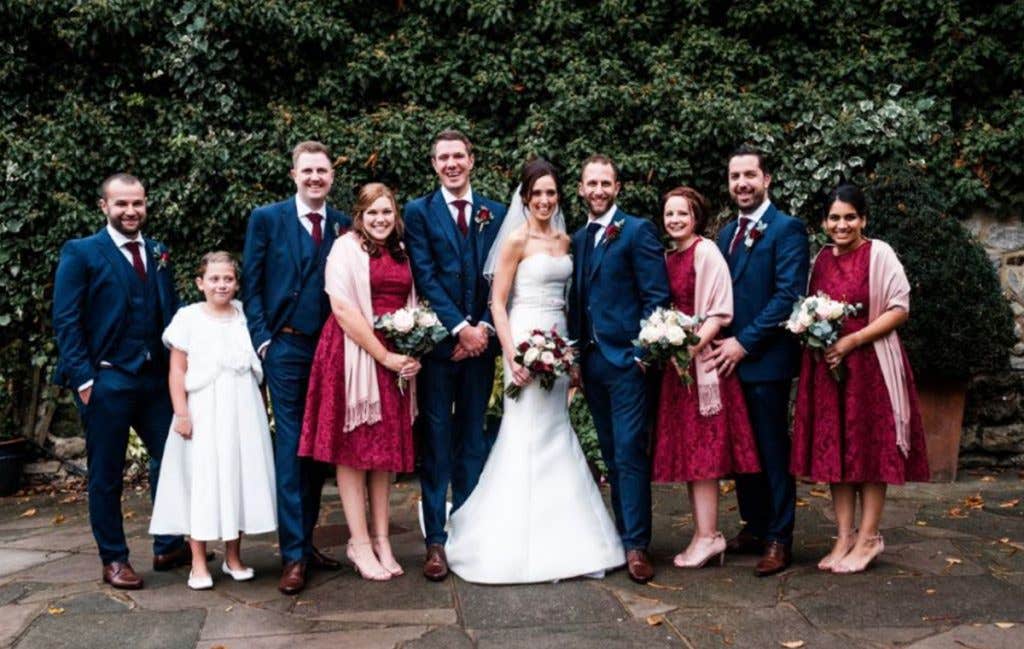 Did your wedding have the wow factor like our autumn wedding feature? If you would like your big day to be one of our real weddings send your favourite photo to info@wed2b.co.uk and we’ll be in touch!