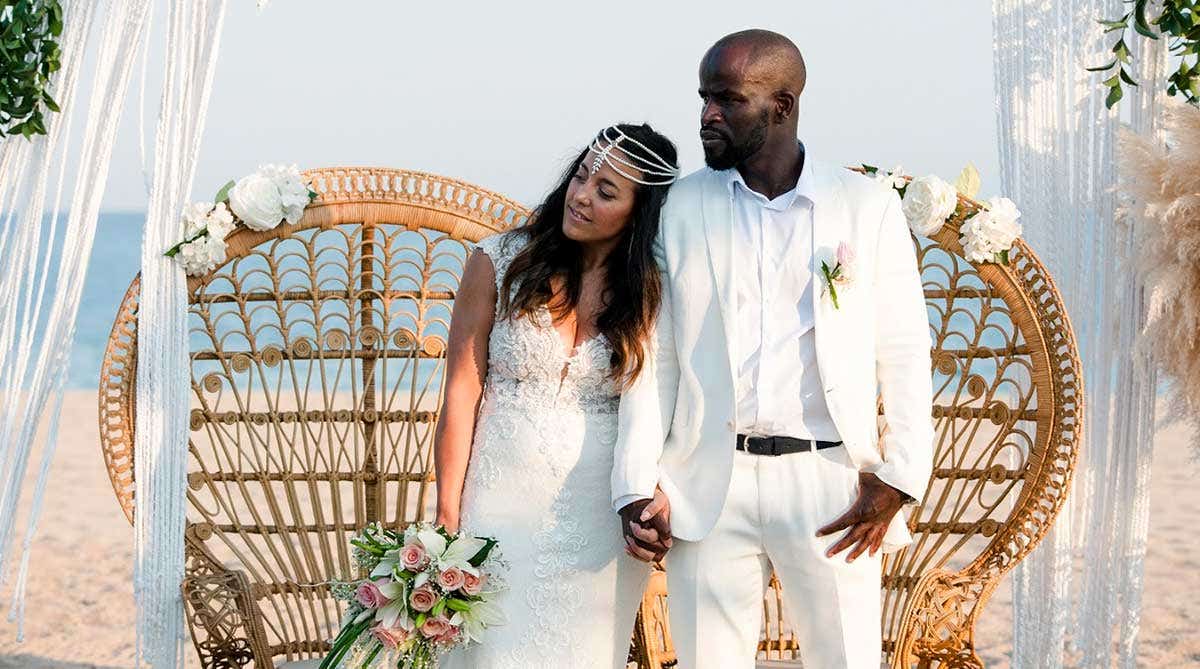 A ceremony with a sea view was the perfect location for this sunny wedding on the Catalonian Costa Brava. Our WED2B Real Weddings Bromley feature reveals more:

Maria met Sene in April 2014 in Spain, while he was there for a friend’s stag do. “When he went back to London we talked a lot by phone and texted every day,” says Maria. “He came back to see me a couple of months later and in December that same year I moved to London to live with him.” 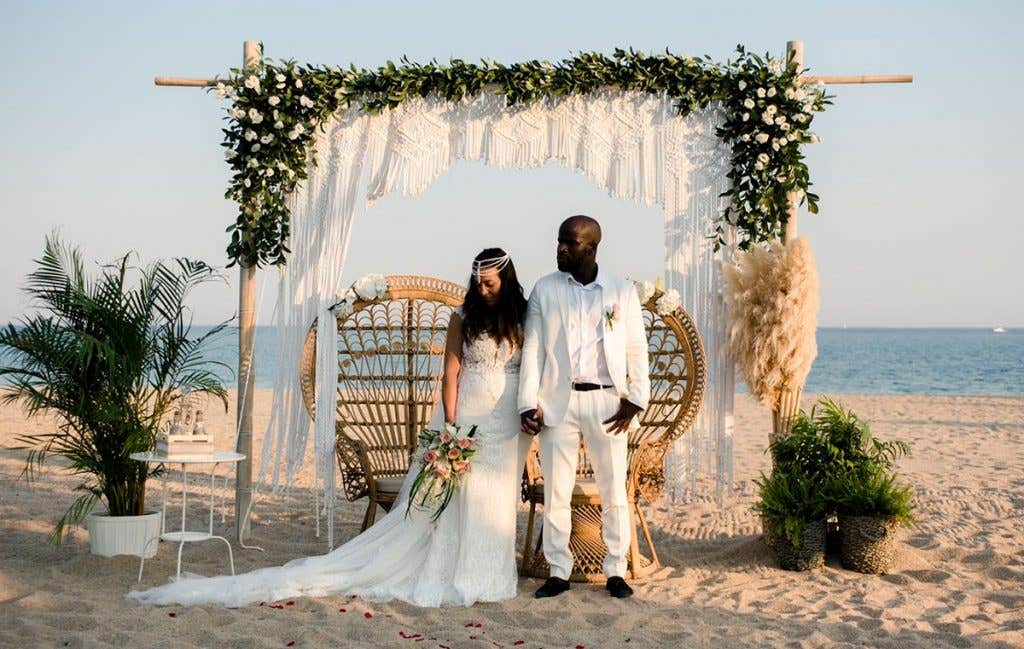 In the summer of 2016 the couple went on holiday to Maria’s hometown of Blanes on the Catalonian Costa Brava. “One of my favourite spots there is called ‘Sa Palomera’, a rocky promontory in the sea, just off the beach, with amazing views of the coastline,” she says. “We went for an evening walk and Sene told me he had never been there at night. So we climbed to the top and, when we got there, he proposed. I was amazed and absolutely surprised, as I used to joke about asking for a ring but never thought he would do it. He chose the perfect place to ask.” 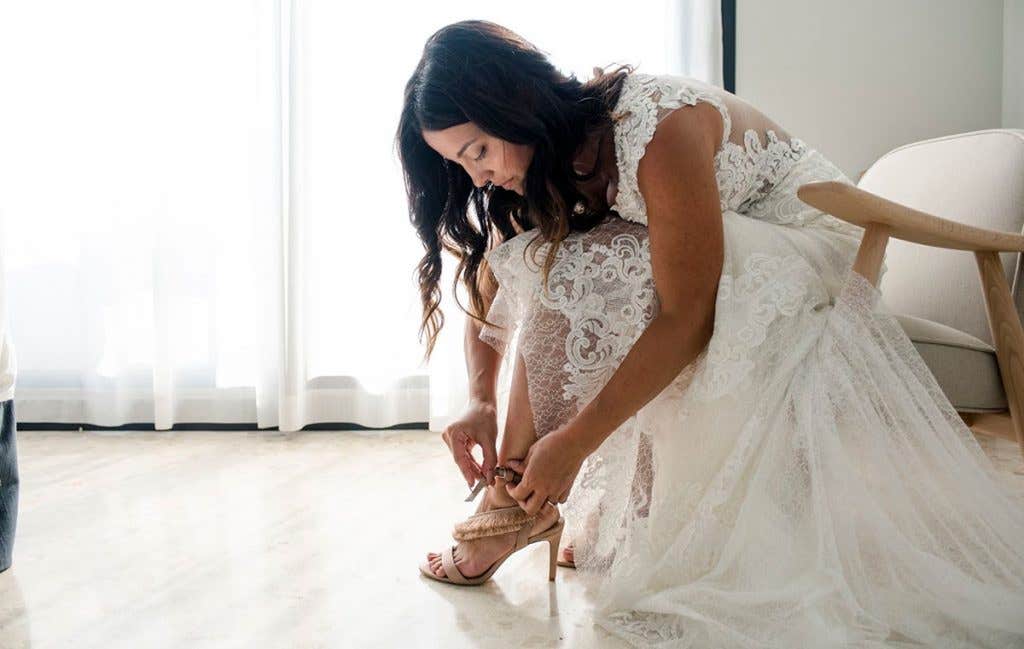 The wedding was planned for the summer of 2017 and Maria’s Mum and sister travelled from Spain in February that year to help her choose a dress. “We went to WED2B’s Bromley store and I choose the amazing Demi gown from the Signature Collection, which fitted the beach wedding we had in mind,” says Maria. 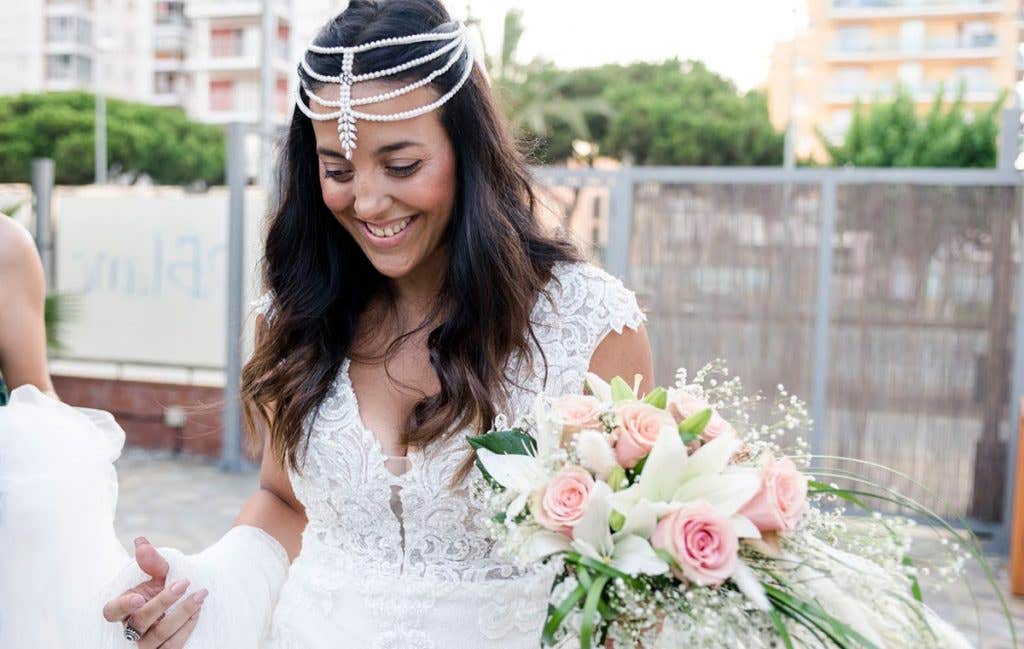 “Unfortunately, we then had to postpone the wedding until 2018, as the venue we fell in love wasn’t available until then,” says Maria. “I visited the Bromley store again, as I was thinking of buying an overskirt, but then I saw the Eleni gown and it was love at first sight! I tried it on, despite knowing that I couldn’t afford to buy a second dress. It perfectly captured the boho chic style I was looking for and I loved the lace and pearl details. I felt like a million dollars in it! The lovely adviser could see my face so she spoke with her manager and they worked some magic. As my previous dress was untouched they agreed to exchange it for me and I couldn’t have been more grateful! I also bought a beautiful Galia overskirt, which I combined with a more simple dress for the after party.” 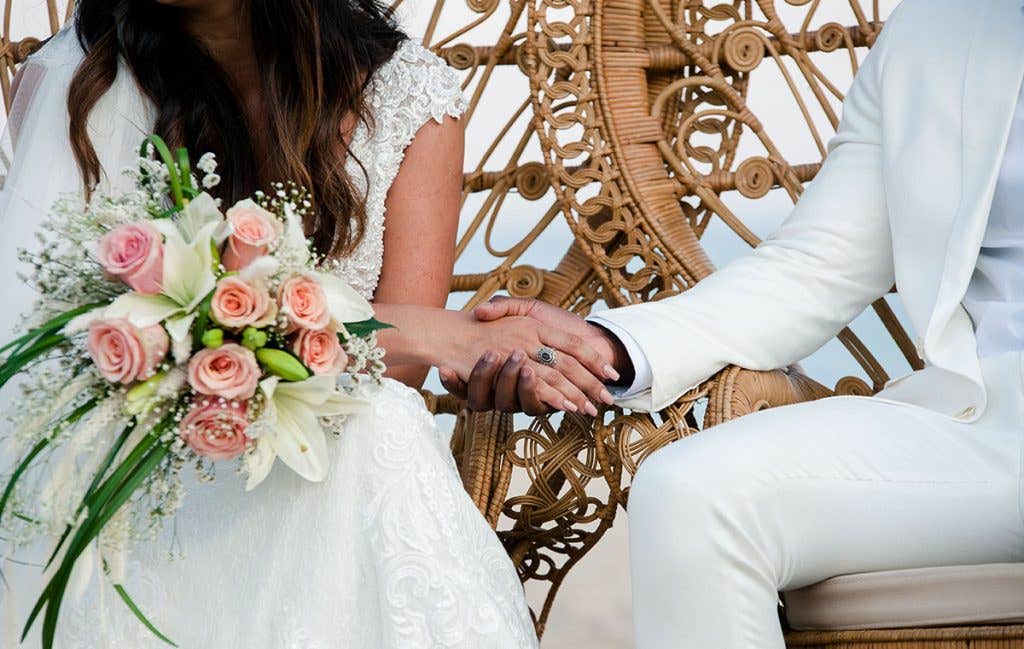 The couple had a beach wedding in Dblanc restaurant, in Malgrat de Mar in Catalonia. “Our ceremony was very intimate and personal, with the involvement of lots of family members,” says Maria. “I walked down the aisle with my Mum, as my Dad passed away when I was nine. I choose a song dedicated to my husband, an acoustic version of Paloma Faith’s song ‘Lullaby’." 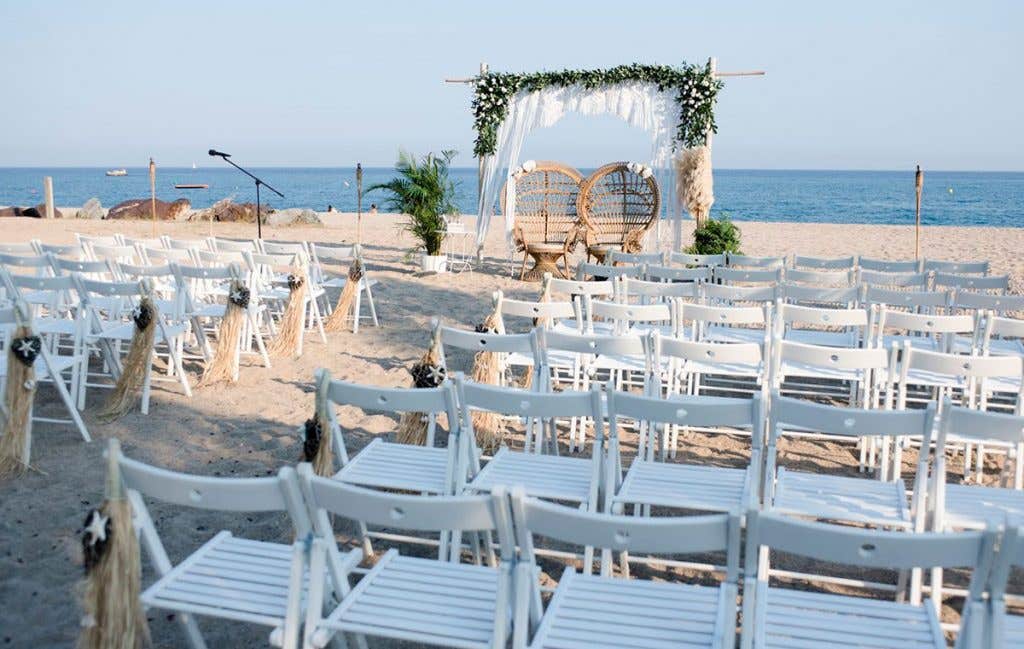 "It’s almost impossible to choose a favourite moment from our ceremony but maybe one was when I got to see my new husband crying and showing so much emotion. It meant a lot, as he doesn’t show his emotions often. My second favourite moment was when Sene’s son gave a speech. Sene is a single dad, so hearing him thanking me for being his Mum was so moving.” 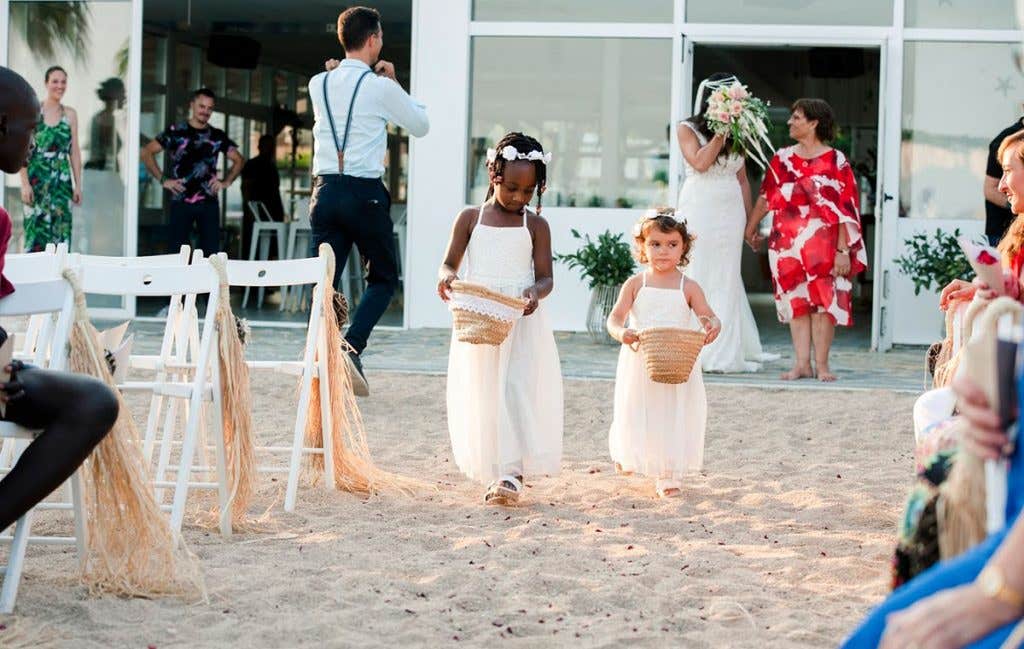 Let’s get the party started

After the ceremony there were appetisers before a dinner composed of different buffets. “We didn’t really have a theme,” says Maria. “The venue was decorated in a boho-chic style and we asked for all-white flowers.The restaurant also made our large four-tier cake with individual heart shape cakes on it, along with lemon mousse tarts with a fruit filling.”

“There were a lot of memorable moments during our beach wedding, but the vows and the speech from our son were the most emotional ones,” says Maria. “We also hired a photo booth with lots of funny props. There was a customisable photo album too, where our guests could stick the pictures and write a message for us. It was really entertaining and the album is an amazing souvenir from the night.” 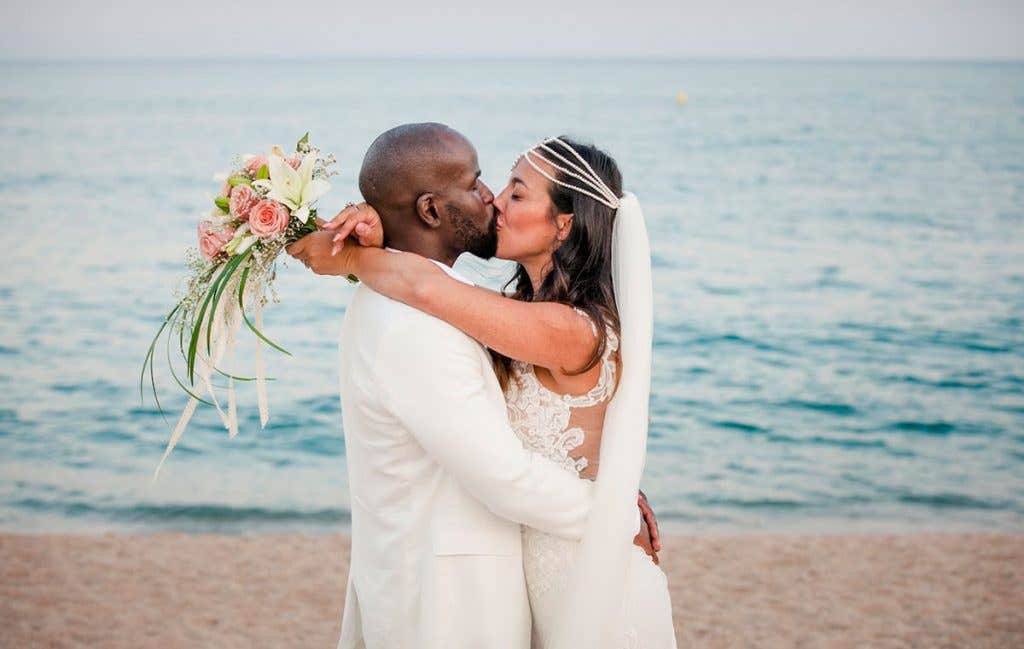 Did your wedding have the wow factor like our beach wedding feature? If you would like to be a part of our real weddings feature send your favourite photo to info@wed2b.co.uk and we’ll be in touch!