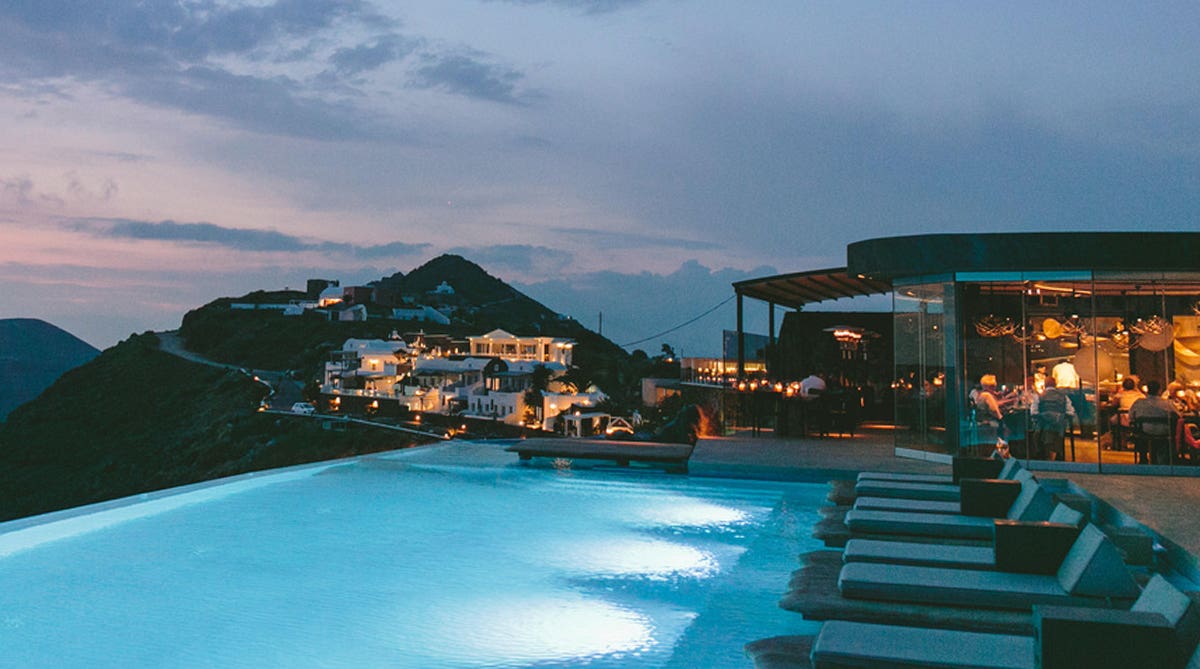 Lisa and Ashleigh both worked in the same line of work for years but their paths had never crossed. “Then we attended the same meeting and after that we seemed to meet regularly at things,” says Lisa. “There was an instant attraction as we both have similar jobs and have a very similar outlook on things.” 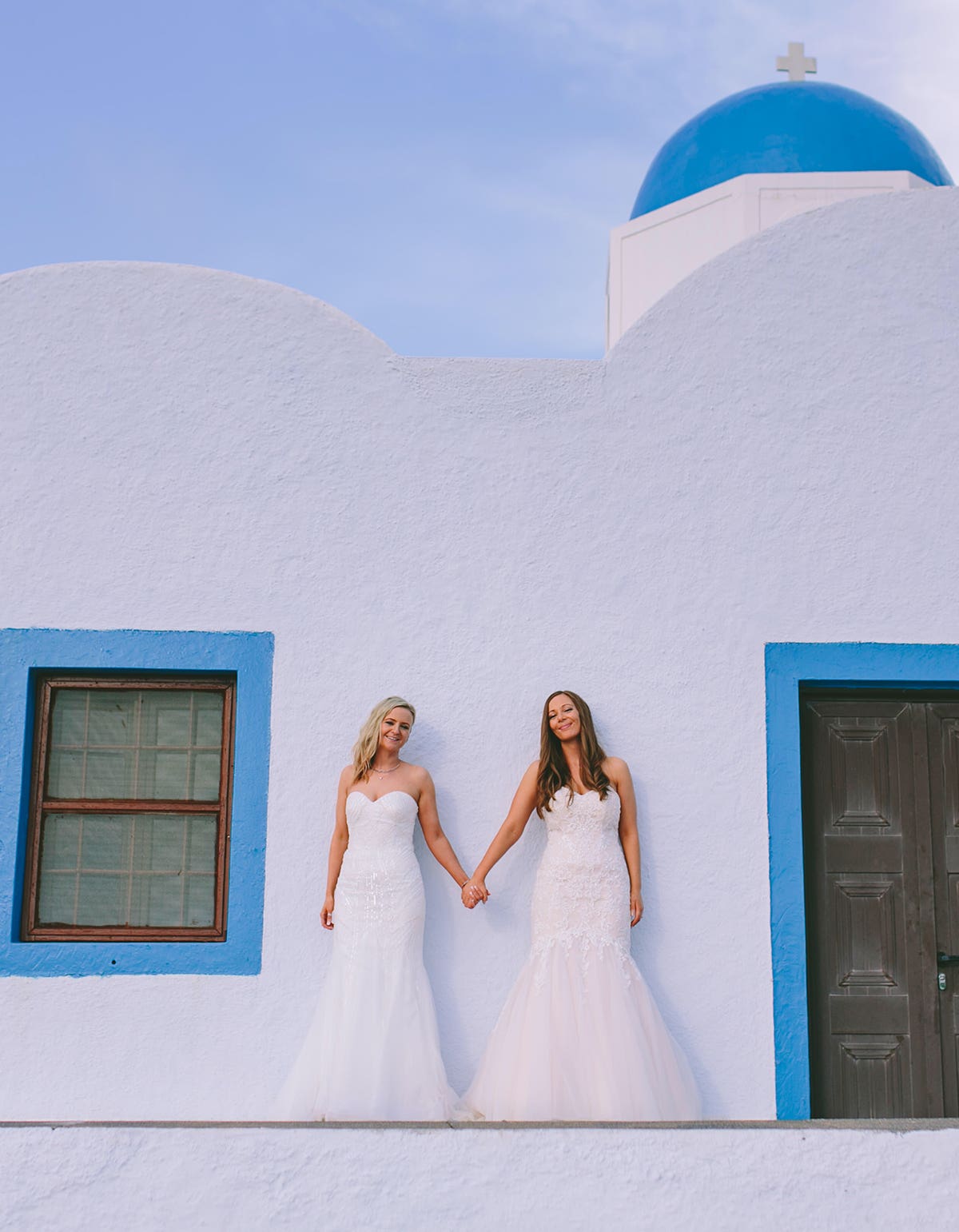 Ashleigh proposed at the top of Ben Lomond. “Ashleigh loves the outdoors and climbing Scottish hills but me… not so much!” says Lisa. “However, I decided to give it a go. She promised I would enjoy it and said that something magical happens when you reach the summit. Well, something magical did happen! Ashleigh had a T-shirt made with the words ‘Just Say Yes’ (from a Snow Patrol song) printed on the front. At the top of Ben Lomond she asked me to take a photo of her and, as I went to take the picture, she unzipped her jacket to reveal the T-shirt and got down on one knee with a ring. I was gobsmacked!” 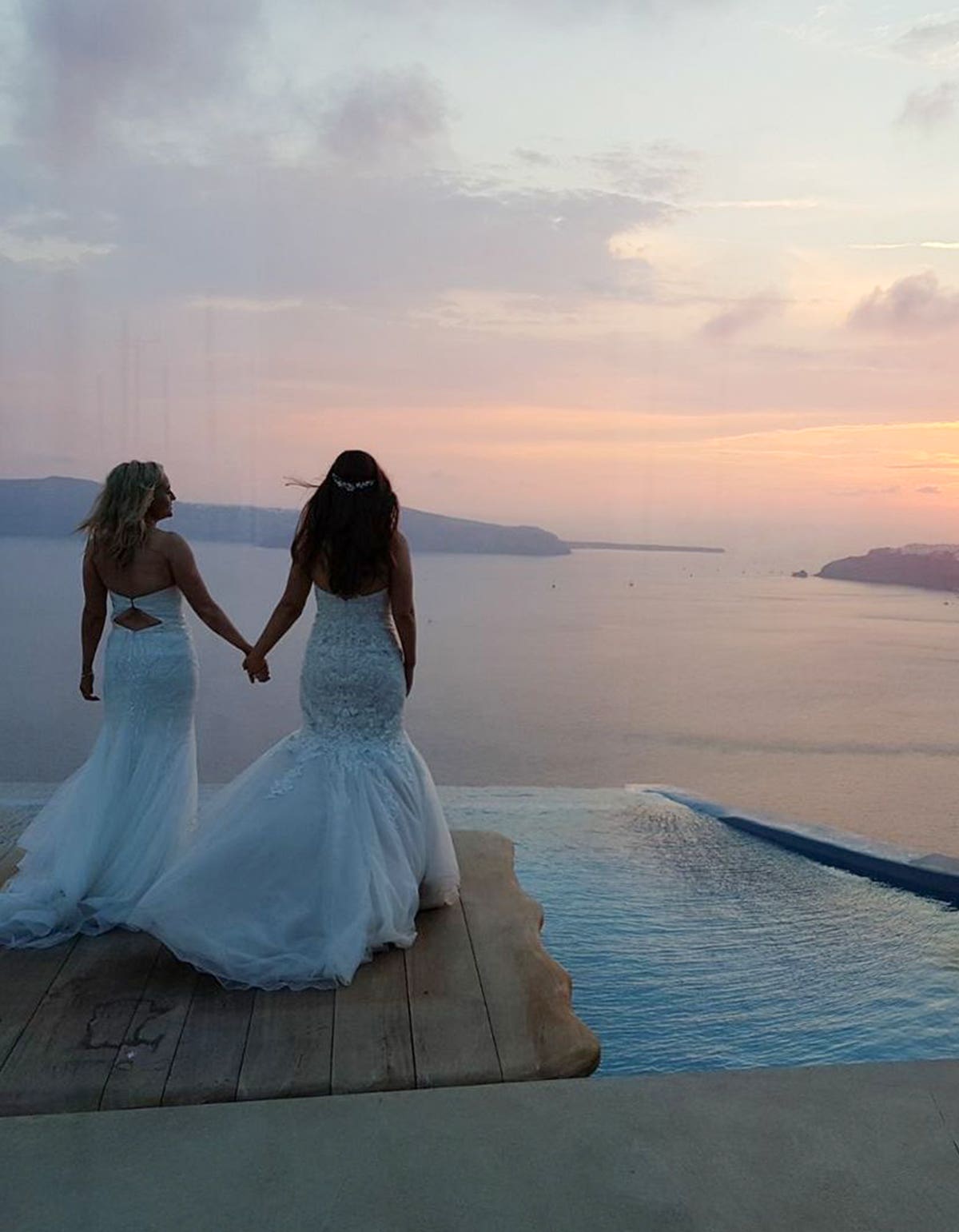 From Scotland to Santorini

The couple searched for the perfect wedding venue for a while and had looked at most places in Scotland when they decided to do a Google search of venues abroad. “I had always dreamed of visiting Santorini. We looked it up and instantly decided that was where we would get married,” says Lisa. “It’s spectacular. The sunshine, the endless blue backdrop and the history of a volcanic island was too amazing to resist.”

Both girls chose a dress from WED2B's Glasgow bridal store. “I wore Gracie in blush,” says Lisa. “As soon as I put it on I loved it. I wanted something chic and elegant and it was just that. Ashleigh wore Genesis. With its Art Deco inspired look it was exactly what she was looking for. Her bridesmaid saw the dress and instantly thought it was the one. As soon as she tried it on Ashleigh agreed.”

“Our Glasgow store experience was fabulous,” says Lisa. “I bought my dress firsthand, as we were so keen to keep the dresses a secret from each other, the only people who had seen both were our bridesmaids and Rhonda who worked in the store. That was so important and Rhonda was great.” 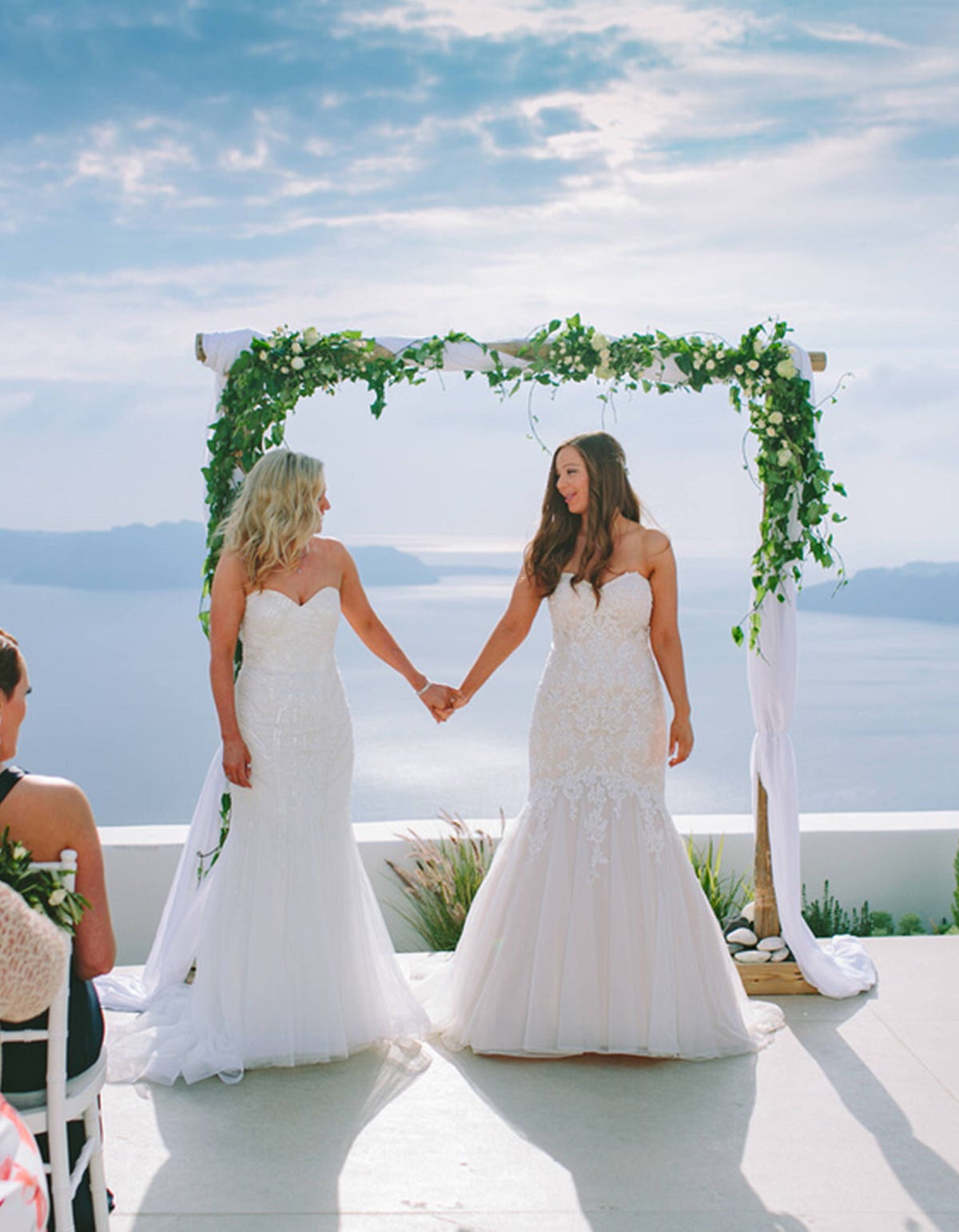 Rooms with a view

Their Santorini wedding ceremony was intimate and personal with just close family and friends and an unrivalled view. “Our brothers walked us both down the aisle to ‘Hoppipolla’ by Sigur Rós, a piece of music we both love,” says Lisa. “It was a highly emotional ceremony, perhaps because it was small and intimate. We were getting married in the glorious sunshine, 2,574 miles from home, with the people we love most in the world beside us. There was a funny moment when our celebrant took a selfie with us all behind him. This was because Ashleigh and I are known amongst our friends and family as being selfie queens. One of our personalised vows was to never to miss a selfie opportunity!” 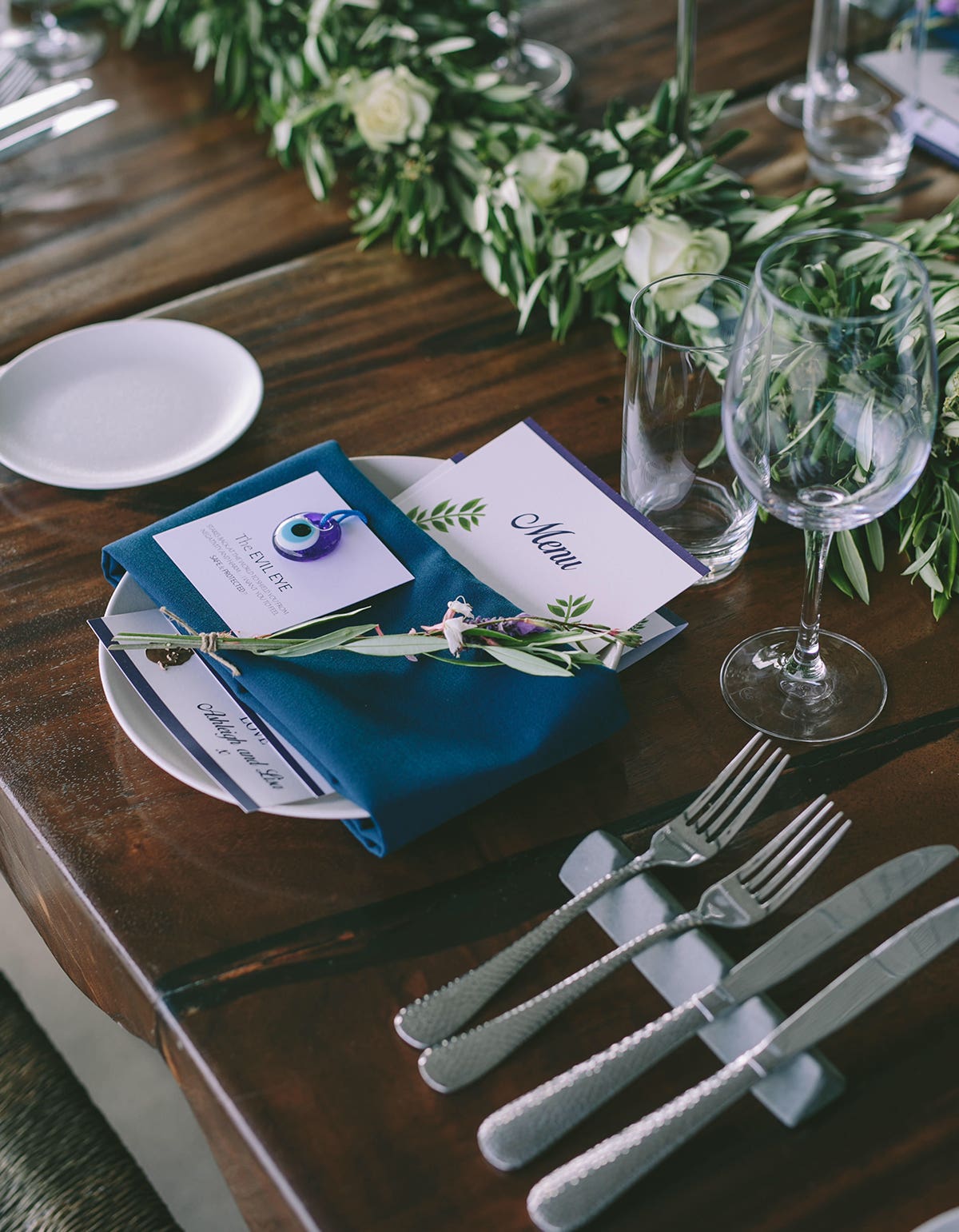 After the ceremony there was champagne and cocktails before a five-course meal. “It was genuinely one of the most delicious meals I have ever tasted, the food was exquisite” says Lisa. This perfect Santorini wedding got even better “As we ate the sun was setting behind us and the sky lit up like I have never seen. It really was a magical moment, and one we will never forget.”

Afterwards guests danced and laughed the night away. Sparklers lit up the room for the first dance followed by some Greek dancing. “The dancers took to the floor before getting us all involved,” says Lisa. “It was so much fun and great to experience a bit of the local culture. Then the music continued, cocktails were shaken and we danced into the small hours. We were a little worried that a small wedding would lack party atmosphere but I’m pleased to say that couldn’t have been further from the truth. One of the venue's events managers said ours was one the most amazing weddings he’d ever attended and that, for a group of 25 people, he’d have thought there were 100 of us in the room!” 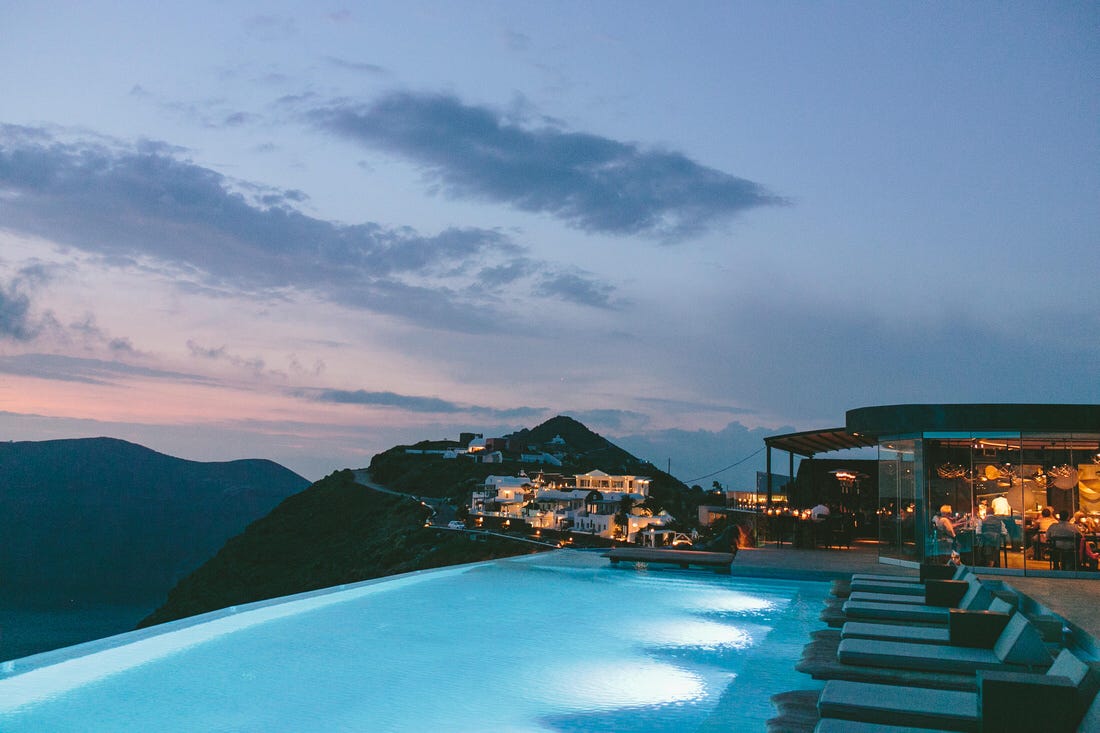 Did your wedding have the wow factor like our Real Santorini Wedding feature? If you would like to be a part of our real brides' stories send your favourite photo to info@wed2b.co.uk and we’ll be in touch!