This couple’s rustic wedding was full of love, laughter, singing and a little bit of dangerous dancing! Our WED2B Real Weddings Southampton feature reveals more: Leanne and Steve met on Tinder when they were both living on the South Coast...

Leanne and Steve met on Tinder when they were both living on the South Coast. “Steve is from Wales but joined the Navy later in life and was based near Fareham, where I lived,” says Leanne. “On our first date, we walked along the beach before going for drinks and bowling. Then we had fish and chips on the beach as the sunset.” 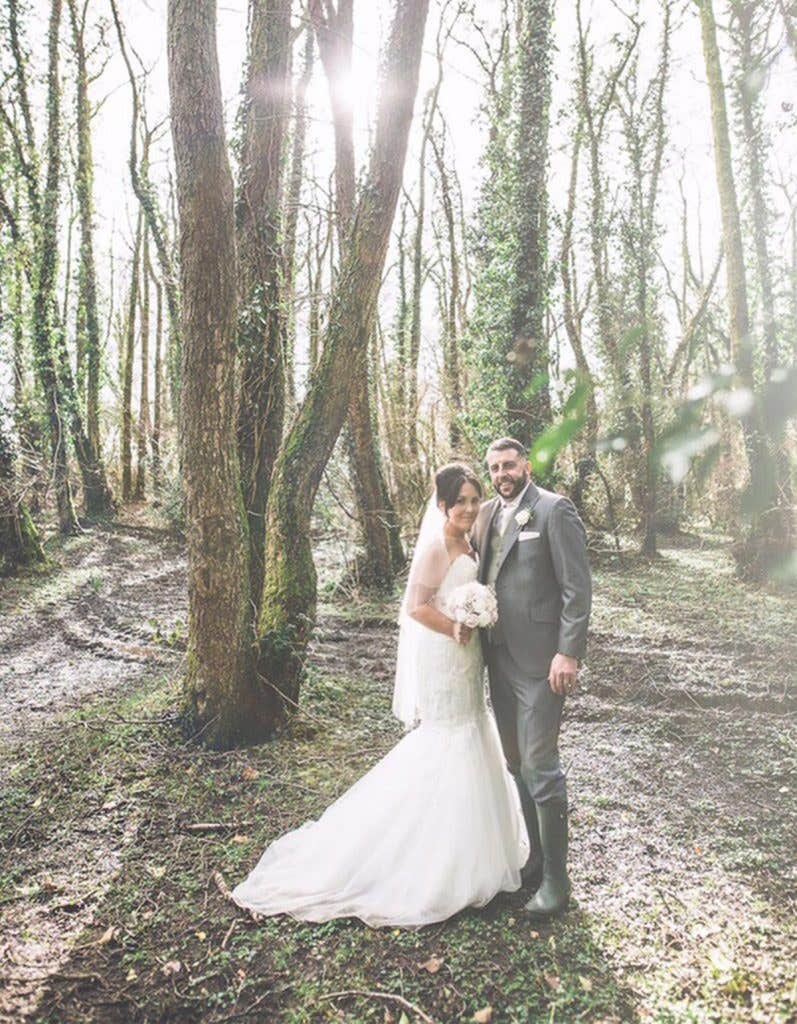 Will you marry me?

Steve took Leanne’s father out for drinks and asked his permission before he popped the question. “He proposed on Christmas Day and I was very surprised,” says Leanne. “He wrote his speech in a Christmas card. Football is a huge part of his life and I always go with him since we met, so he got me goalkeeper gloves too because I’m a 'keeper'. He told me that since losing his father, Christmas had lost that special feeling but that I’d brought it back to him. So he wanted to make every Christmas from now on special because it was the day he asked me to marry him.” 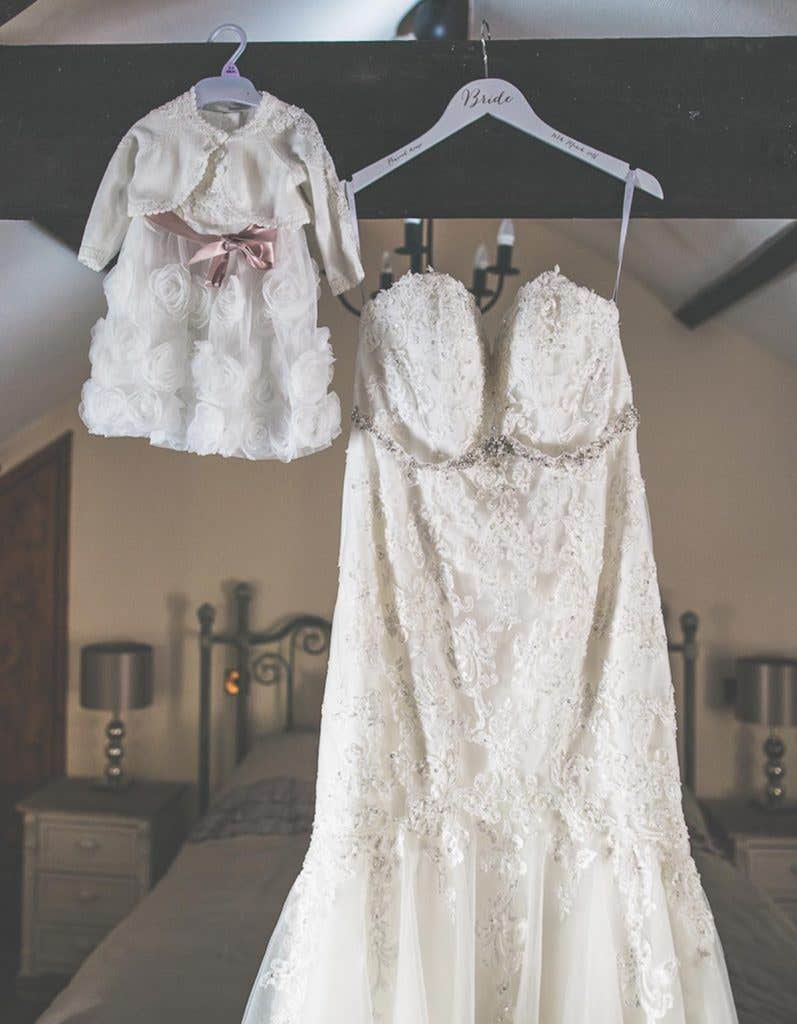 Leanne visited WED2B’s Southampton store and found her dress and her veil the very same day. “My store experience was amazing and the girls were so lovely, patient and helpful,” she says. “I tried on so many dresses, nothing was too inconvenient and they gave me honest impartial opinions. I'd tried on several dresses from different places but Gracie was the first dress I tried that I instantly loved everything about and how it looked on me. I could see myself walking down the aisle in it. I also bought a veil and an underskirt to complete the look. Everything fitted together so perfectly.” Leanne and Steve’s four-month-old daughter accompanied them on the big day wearing an ivory dress embellished with roses and a mocha belt to match the rest of the wedding party.

The couple married on Friday 16th March 2018 at Pencoed House Estate in Wales. “It’s a rustic wedding venue with a shabby chic vintage barn,” says Leanne. “When we went to view it we instantly got emotional. It was the only place we’d seen where we loved every detail. We could really envisage our wedding day there with no hesitation. We were excited just being there.” 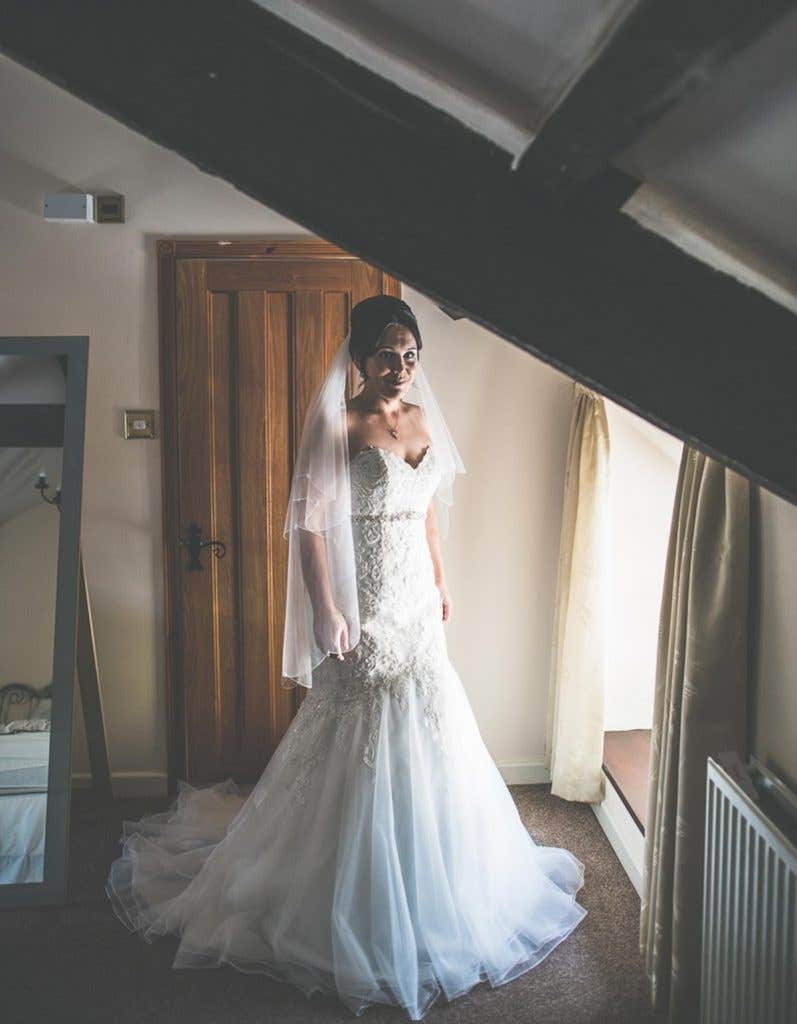 Leanne’s father walked her down the aisle to ‘The One’ by Kodaline. "The registrar did one reading and one of our close friends wrote her own and read it out,” says Leanne. “We signed the register to ‘Flashlight’ by Jessie J and ‘Little Things’ by One Direction, as the lyrics feel very personal to us. Then we walked out to ‘Shut Up and Dance’ by Walk the Moon, as this was on all the time when we first dated. Steve used to say it was our song, as the lyrics said, 'this woman is my destiny' and that’s how he felt. We also wrote our own marriage vows, which were also very personal."

"My favourite memory was seeing Steve cry as he held our daughter and saw me for the first time as I walked down the aisle. Hearing the vows written by my husband and finally being told we were husband and wife for always was the happiest moment of my life!”

Afterwards, there were photos and champagne followed by a three-course wedding breakfast. “The venue provided flowers and fairy lights and we had candles on tables,” says Leanne. “We wanted to keep it very simple with roses and a vintage theme.” The cake had tiers of red velvet cake and vanilla sponge and was covered in roses. “There was also a big Tinder logo on the back of the bottom tier in homage to how we met!” laughs Leanne. “The speeches were hilarious and then there was lots of singing, cheering, love and laughter, along with cheesy chips to finish. Unfortunately, the party was cut short a little early as one guest got so excited dancing to Tina Turner they broke their leg!”

Did your wedding have the wow factor like this rustic wedding? If you would like to be a part of our real weddings feature? Send your favourite photo to info@wed2b.co.uk and we’ll be in touch!