The online match that was meant to be

It took Damon 5 days to build up the confidence to contact Ally after Tinder had matched them. She happened to be away in Las Vegas for work and was visiting the Valley of Fire. They finally met in person 2 weeks later to go wine tasting in London.

Back in Las Vegas on holiday a few months later, they decided to go to the Valley of Fire together to see the sunrise. Getting up at 4 am they drove into the desert where Damon set up the camera to film the sunrise. To Ally's surprise, he was actually preparing to film his proposal!

"He's an animator and turned the stills from the film into a row of cells that looks like it's from the movies!"

So, although Ally burst into tears, she said: "I wasn't surprised as he had said from a few months in that he would marry me one day." However, she added, "I wasn't expecting him to do it then."

Even Ally's father hadn't let on that he knew of Damon's plans. 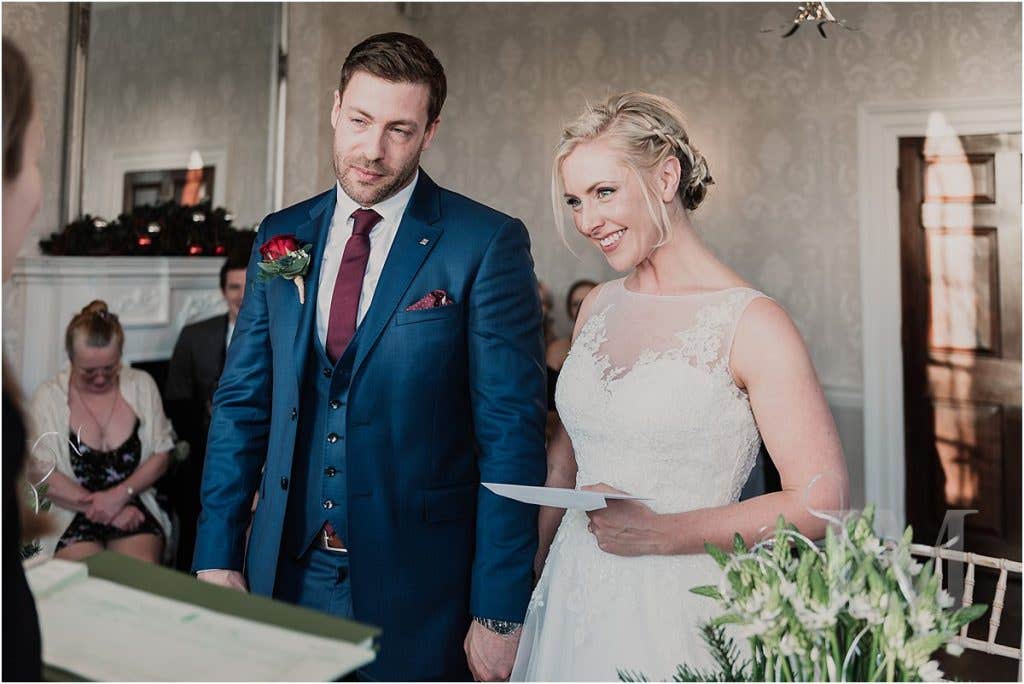 Ally visited the WED2B bridal shop in Surbiton with her best friend Emma and tried 'Eva' from the Anna Sorrano collection.  With a simple dress in mind, Ally added "I loved the detail in the back and trailing lace down the bodice."

While Ally didn't feel emotional at the time, she added "The assistant was amazing and said not everyone feels like that."

So, after a quick break to think it over, Ally returned to store to buy the dress. Adding "The detail in the dress was beautiful enough."

If you love Eva, take a look at our range of short wedding dresses here, we know that you'll also love Sparkleand Tamsin. 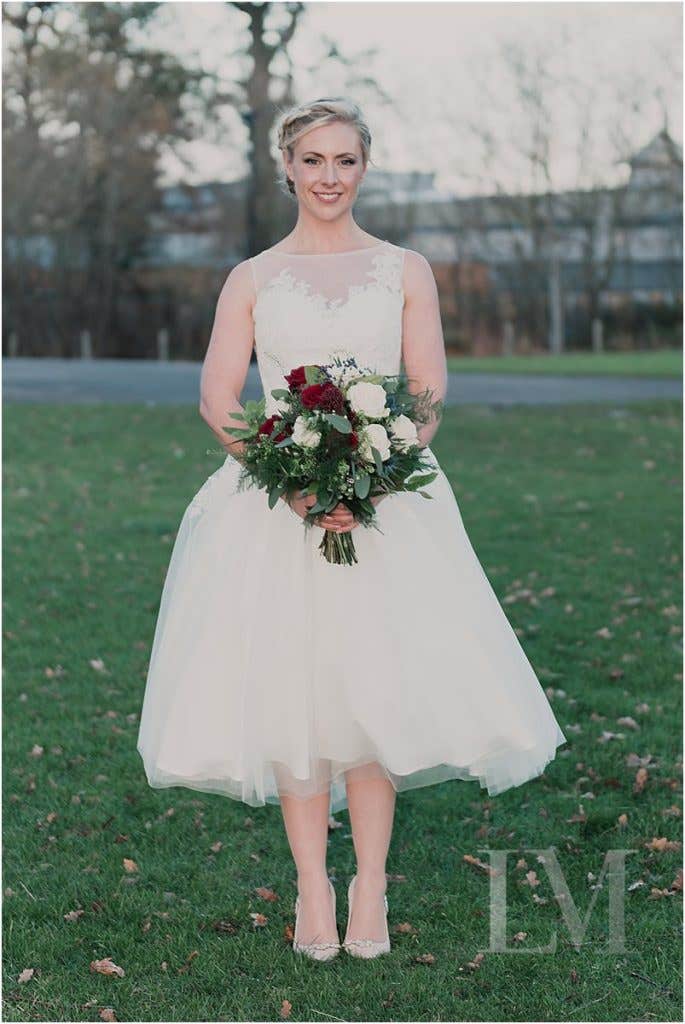 Rather than feeling worried and overwhelmed, Ally was delighted with her bridal experience. She said "The staff were amazing at making me feel relaxed. It was amazing that they read me and my personality and gave me a personalised experience!"

An intimate winter wedding in London

With only 20 guests, Ally and Damon's winter wedding in London was an intimate and personal celebration.  Initially, Ally didn't want any bridesmaids but best friend Emma was such support throughout her life that she was made an official non-official maid of honour! 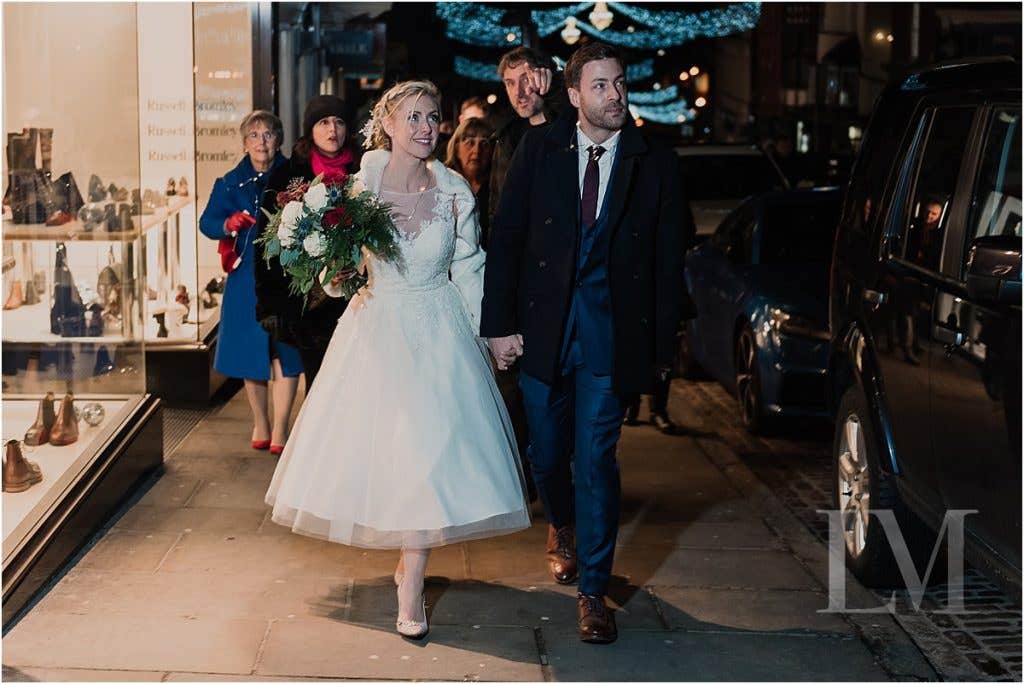 Just over 3 months after the proposal Ally and Damon were married at Morden Park House. The intimate space had beautiful french doors overlooking Morden Park, "The light was beautiful" Ally said. "My Dad walked me down the aisle as I tried desperately not to cry!"

As they both work in the entertainment industry, the simple ceremony included love songs from the movies whilst the register was signed. "Our most vivid memories is the way we looked at each other during our vows. It was like the universe stopped and something changed and solidified between us. It was truly magical."

Following the ceremony, they enjoyed prosecco in the park with their guests and dinner at The Weyside, a riverside pub.  More friends joined them for a very special walk-up Guildford high street for their first dance. 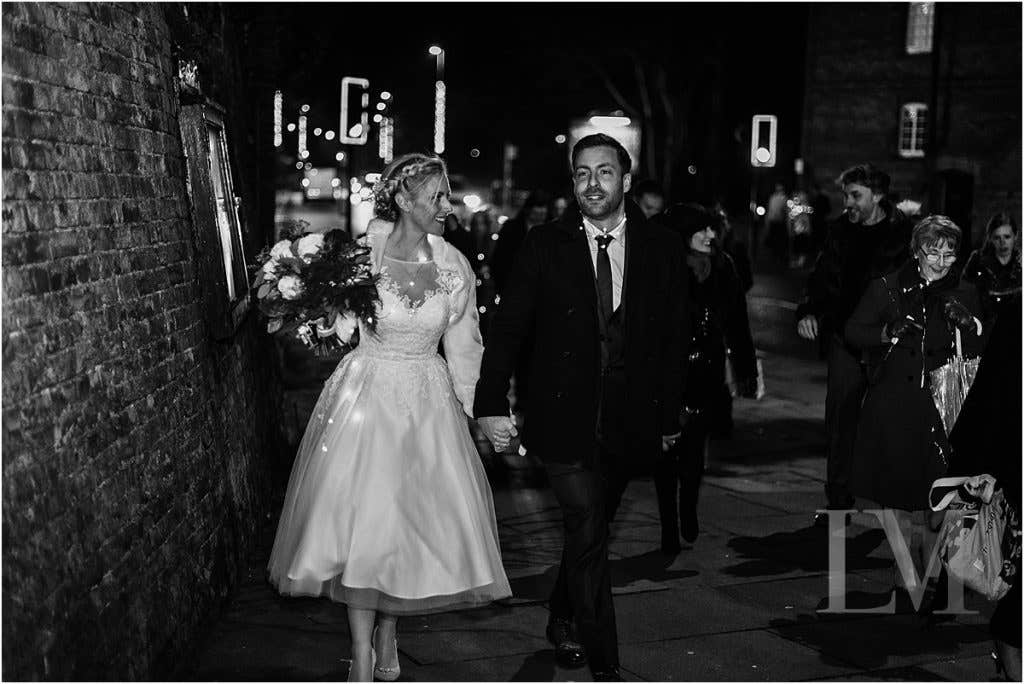 The couple had a surprise in store for their guests, which was a truly magical and memorable moment. Luckily, that December night was perfect for dancing on the street. "It felt like a scene from a movie and was just incredible" Ally added.

Draped in fairy lights and with a speaker playing Christmas tunes, Ally and Damon danced under the Christmas lights to "White Christmas."  Ally said, "It was so romantic and I loved seeing all our friends dancing with us on the street with all the lights! We made the local news!" 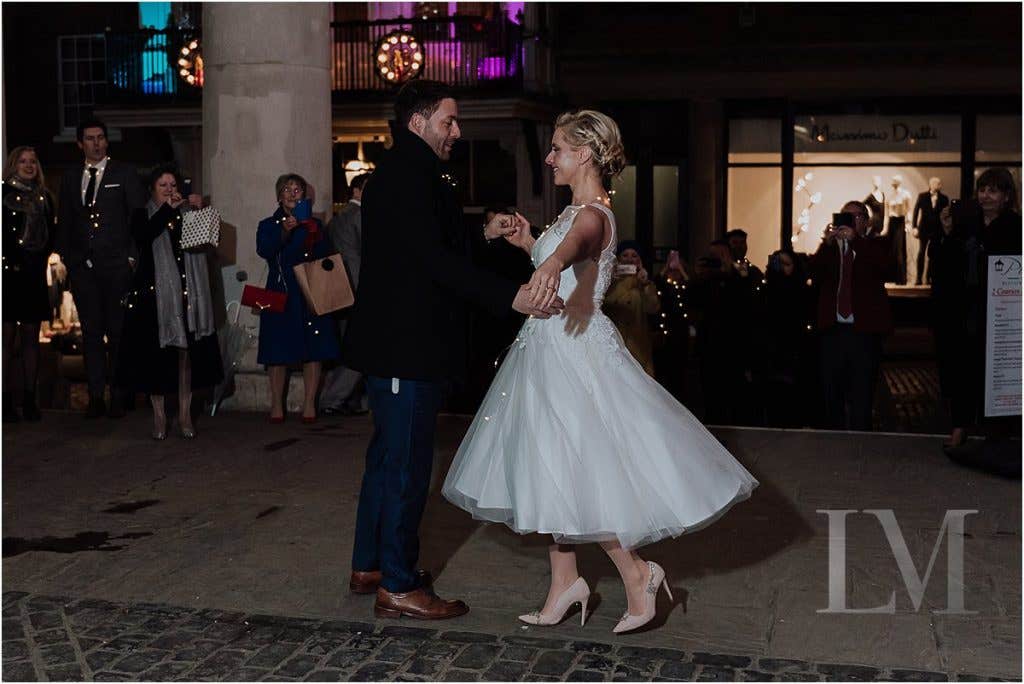 Masses of fairy lights (Ally's obsession) brought the Christmas magic and sparkle to life. To go with the winter bouquet colours Damon wore a burgundy tie.

The guests each received personalised hand-made baubles filled with 'snow'. Ally and Damon had fun selecting photo's of their guests own wedding days or cute couple shots.

Top tips from our winter wedding in London bride:

Because the couple are both laid back, they wanted the day just to be about them becoming family. Ally said, "We didn't let any details stress us out, we didn't let the expense get out of hand and we didn't get into debt."

"Make it personal and intimate and fun!"

Finally, Ally added a glowing review for her photographer. "I'd used her for my website branding photos earlier that year and knew how talented she was. She was so patient with us and our crazy family and friends and captured some amazing moments. Her attention to detail before, during and after the day gave us the perfect experience."