Getting married in Spain was just right for Jackie and Iñigo’s multicultural celebration. Our WED2B Real Weddings feature reveals more: Jackie and Iñigo met in a bar when Iñigo walked past Jackie and she seized the moment. “I approached him...

Getting married in Spain was just right for Jackie and Iñigo’s multicultural celebration. Our WED2B Real Weddings feature reveals more:

Jackie and Iñigo met in a bar when Iñigo walked past Jackie and she seized the moment. “I approached him and told him that my friends and I thought he was hot,” smiles Jackie. “It was totally out of character! He reciprocated and the rest was history. For our third date, I asked if he wanted to play badminton. We had so much fun. I put him through his paces and he was very gracious in defeat. That’s when I knew he was a keeper!” 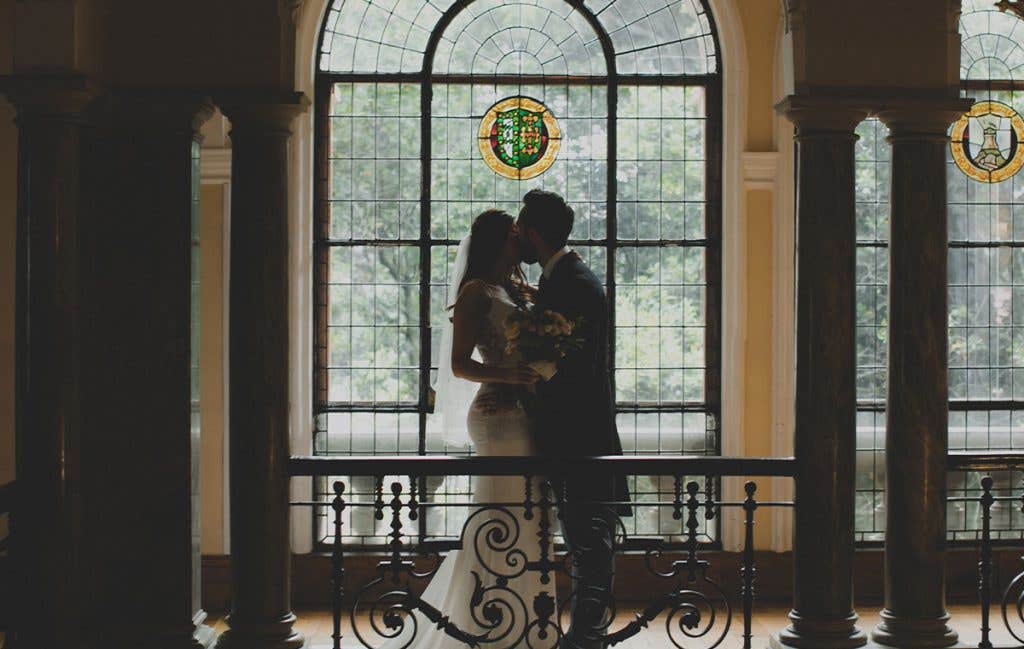 The couple were travelling across Spain when Iñigo proposed. “We had booked one weekend in Granada to visit the Alhambra,” says Jackie. “It was magnificent and we had a brilliant day looking around the ancient palaces and exquisite gardens. In the evening we went to a restaurant overlooking the Alhambra. The views and sunset were sensational! I even said, ‘This feels like we’re on honeymoon’. After dinner, Iñigo wanted to take a picture up on the balcony. Then, while we were admiring the views, he got down on one knee. I didn’t expect it at all, it was such a special moment. I later found out that every Tuesday, when I was out at my Spanish lessons, he'd been rushing off to Leeds to plan and buy the engagement ring!” 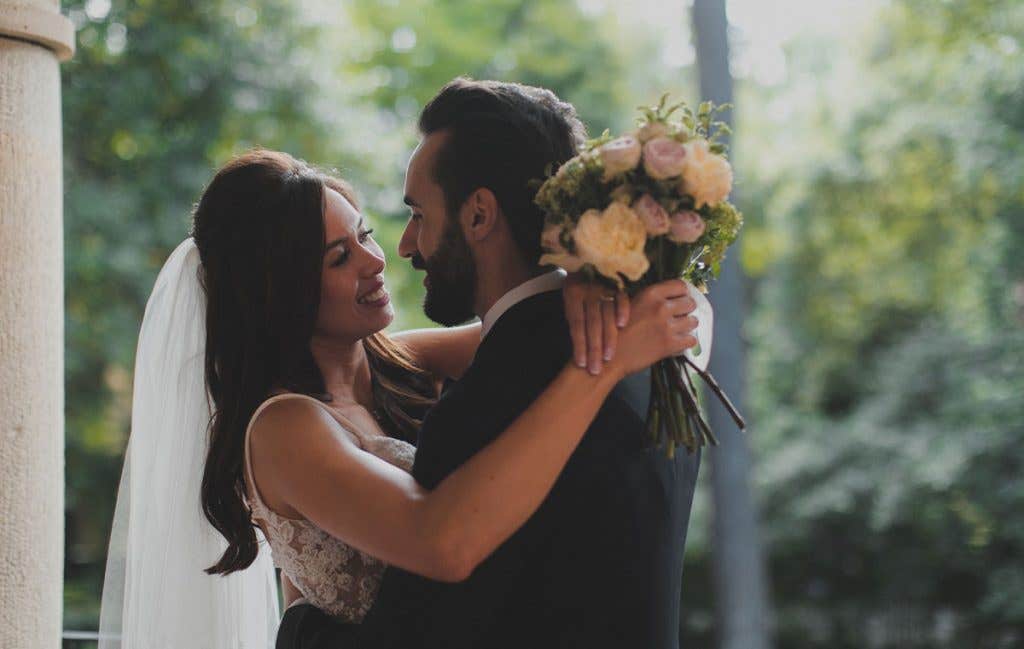 “My sister and some friends were staying for the weekend when we visited WED2B’s Leeds store,” says Jackie. “I tried on lots of dresses but one caught the attention of everybody. It was Tessa, which was a beautiful soft, floaty dress with intricate beading. I couldn’t help but buy it on the day, as I thought I was never going to get a chance like this again.” 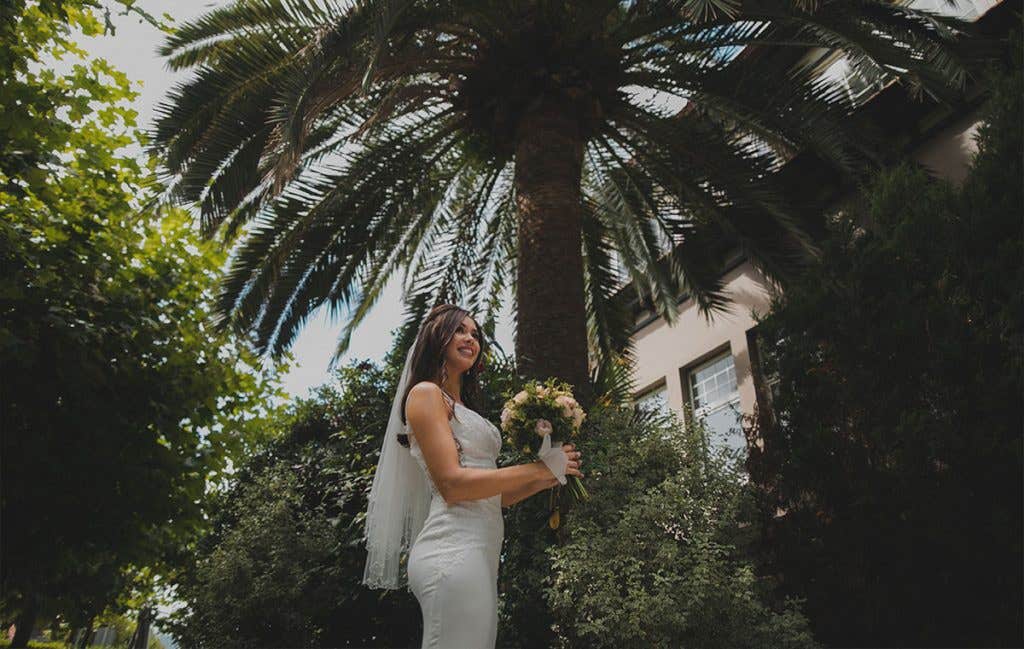 However, as the months passed, Jackie kept looking at WED2B’s website. “I fell in love with another dress,” she says. “I tried not to think about it, but eventually I asked a friend to come with me to try it on, just for peace of mind. They had one left in my size, and I just knew it was The One as soon as I put it on! It was Hayden from the Signature Collection, a mermaid dress with intricate lace. It made me feel incredible. I think at this point I knew I wasn’t going to be making any more trips to WED2B. I was so happy now, I couldn’t wait for the wedding day to arrive!” 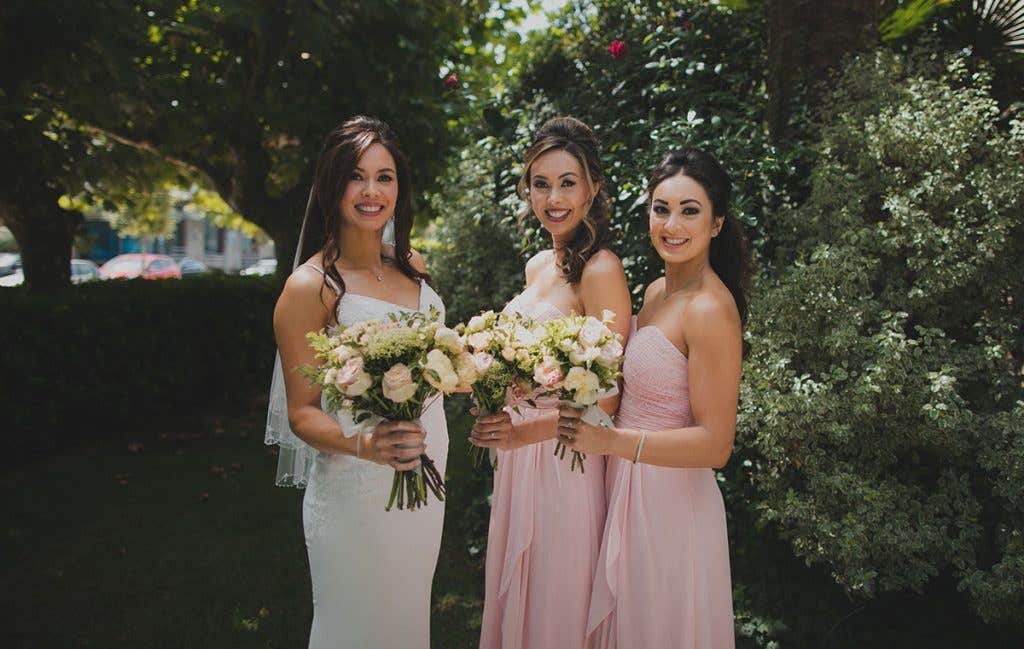 Getting married in Spain

Iñigo is Spanish and the couple chose Bilbao, in Spain for their big day. “We got married on the 18th August 2018,” says Jackie. “As we were getting married in Spain, we decided to go for Bilbao, as it had an airport which was convenient for all our guests travelling from abroad. It was also close to Iñigo’s home city. We first discovered the venue when we spent a weekend away with Iñigo’s parents. Of the three venues we visited, Palacio San Joseran felt just right and was so beautiful. We were surrounded by mountainous landscapes yet it was just a stone’s throw away from the coast. It was the best of both worlds and we fell in love with it!” 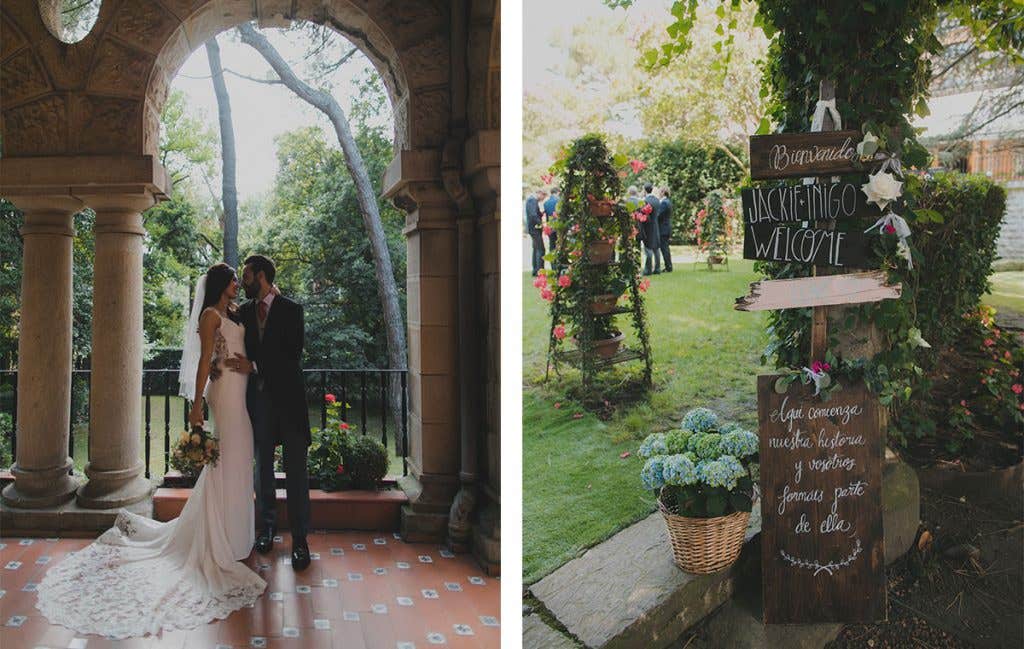 “Getting married in Spain was very special and we had a lovely vicar who spoke Spanish and English, which meant all of our guests could understand the ceremony,” said Jackie. “We had a selection of relatives and close friends give readings too, which was very touching. The evening before I’d also asked my friends to make me smile by pulling faces as I walked down the aisle, as I didn’t want to ruin my make-up. Although I was so excited walking in with my Dad that I actually didn’t cry! Instead, it was Iñigo who welled up at the bottom of the aisle, while looking like the most handsome groom I’d ever seen.” 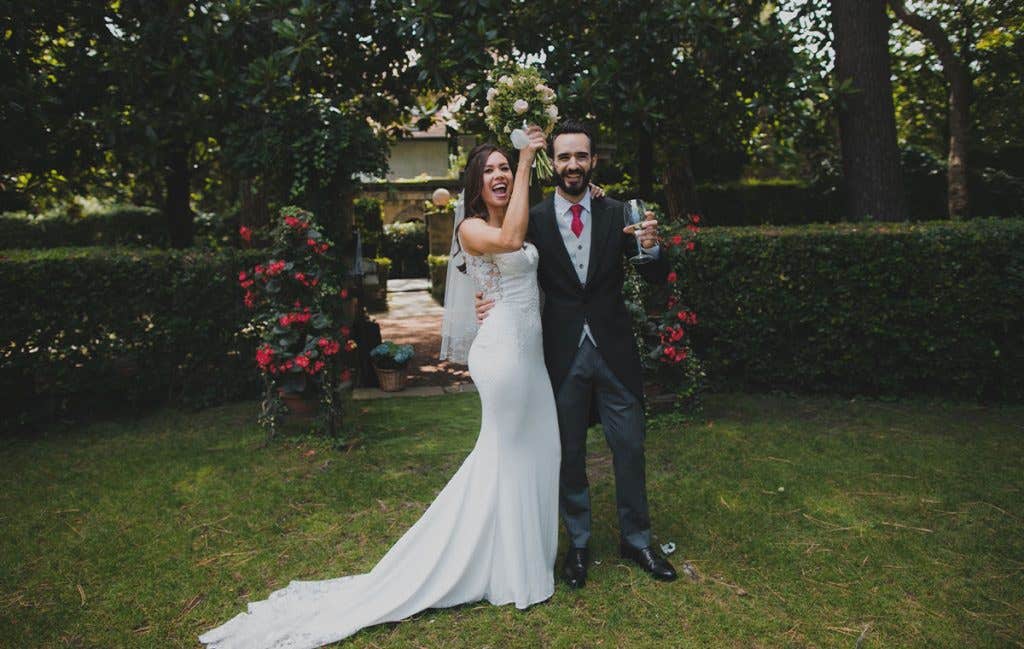 The wedding was a mixture of Spanish and English traditions. “After the ceremony, guests were entertained by a jazz band,” says Jackie. “There were also canapés and Champagne and it was such a stunning day. We were very lucky with the weather, as the Basque Country can be rainy in summer but the sun shone and we had a glorious day!” 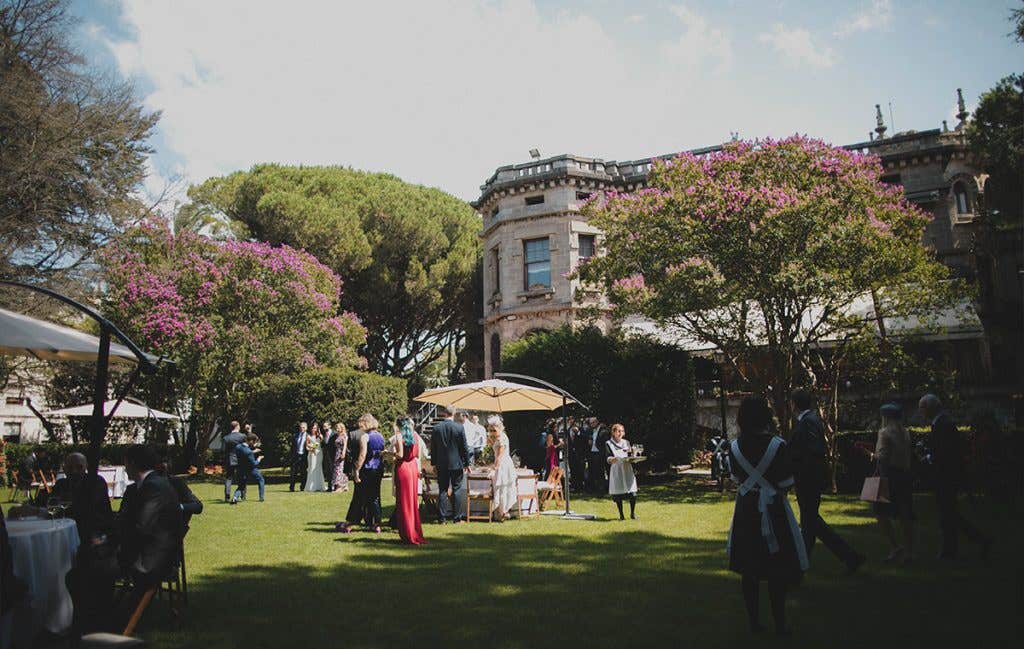 “Later, we entered the dining hall to 'Can’t Hold Us’ by Macklemore,” says Jackie. “It’s not your typical wedding entrance song, but we love to dance and it’s one of our favourite tunes. We were welcomed by our guests waving their napkins, cheering and whistling as we made our way around the tables. This was one of the most memorable moments for me. Once we all sat down, the atmosphere was electric and it was great to see everybody smiling and getting along with each other. We absolutely loved it! When you're getting married in Spain it’s traditional to give presents to the couples who are getting married next, which was a lovely surprise for my English guests. I gave my friend who had travelled around Peru with me a llama piggy bank!” 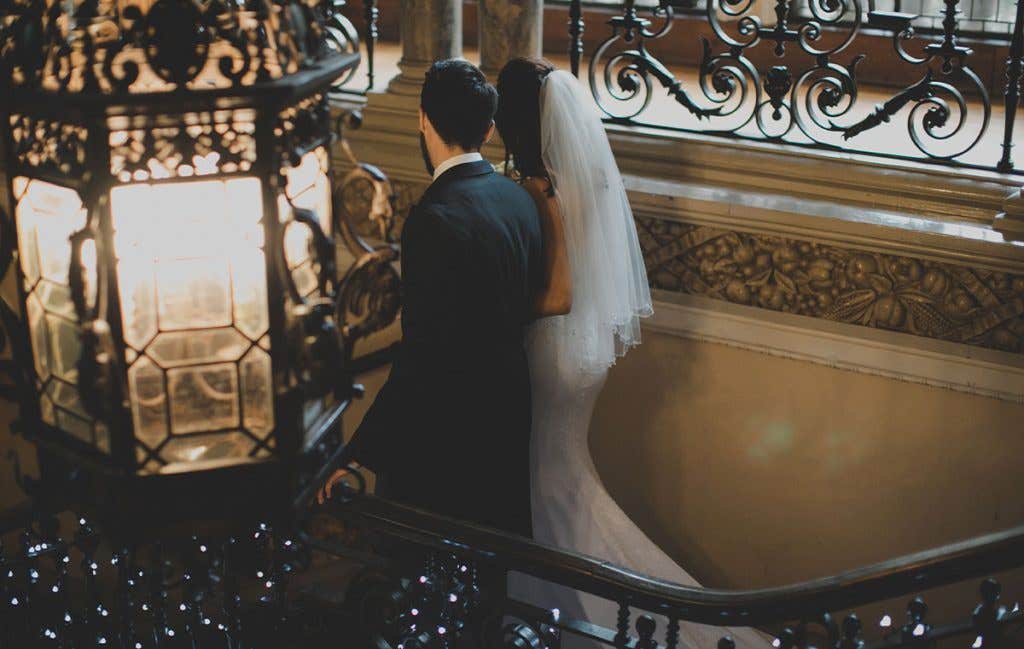 Getting married in Spain meant the couple could follow another of the country’s traditions. “In Spain, newlyweds hand out gifts or favours to the guests personally, instead of leaving them on the tables, so we got to spend time with everyone,” says Jackie. Iñigo’s friends had also planned a surprise gift. “We both received beautiful watches and also a 6,000-piece jigsaw puzzle, to symbolise our union and to encourage us to spend time together building it piece by piece. In fact, we soon realised how big this project was! After six months of perseverance and major backache, we finally completed the puzzle and received the reward of money from his friends. We love a puzzle challenge but not quite that big!” 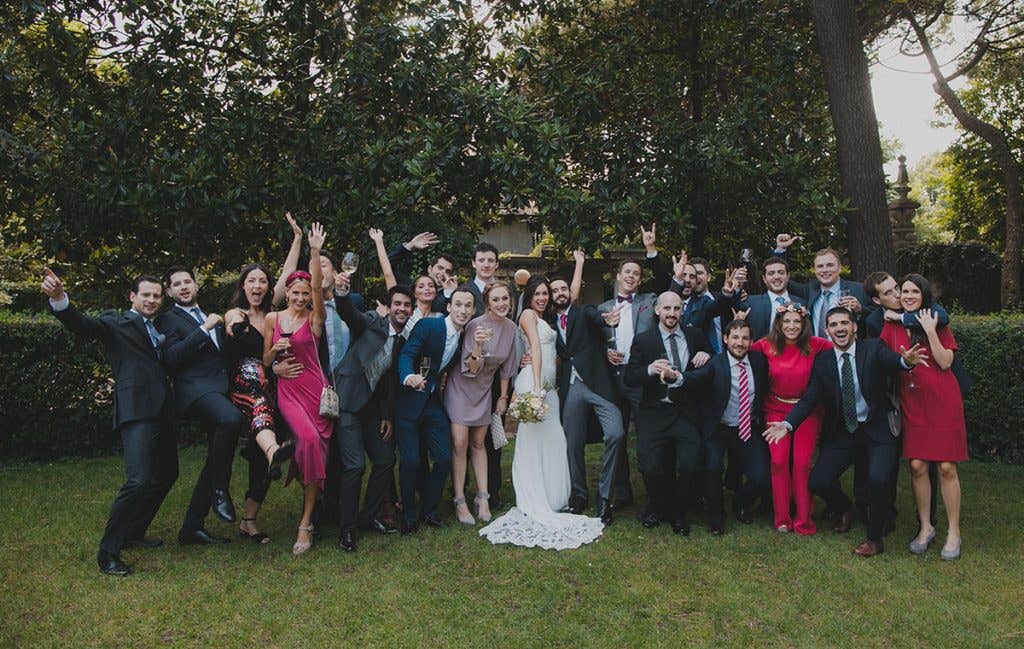 Do us a favour

The favours were personalised mirrors for the ladies and bottle opener magnets for the men. “I also made white butterfly name cards, which I wrote on in a calligraphic style,” says Jackie. “We also made our own gift bags and a candy table, which we decorated with flowers and pictures. In the evening there was a photo booth too, which guests could enjoy along with unlimited drinks to ensure everybody had the best time!” 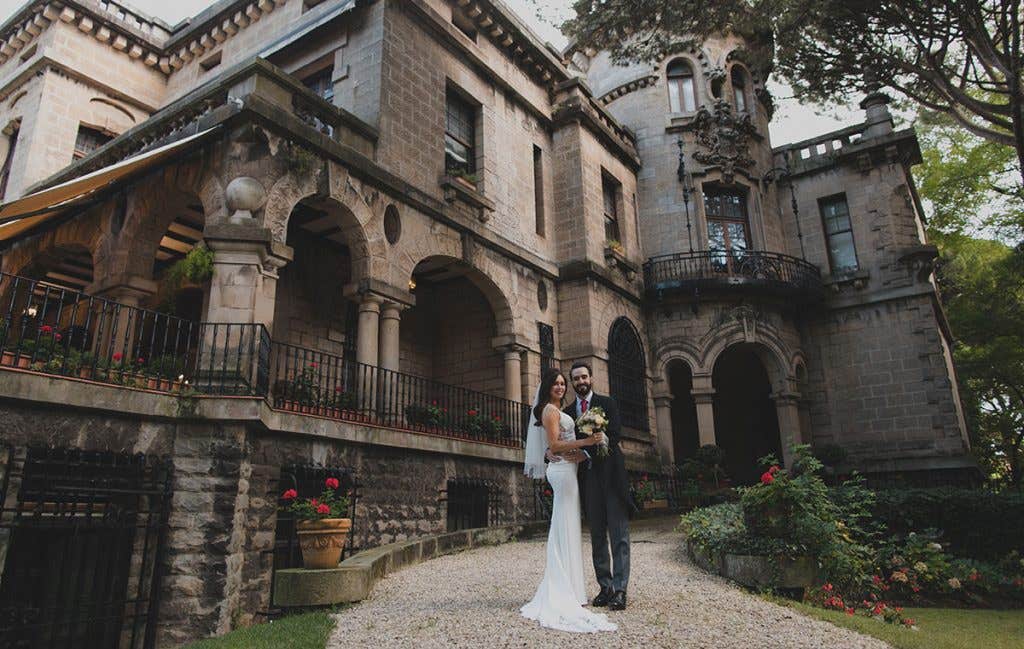 “As soon as you buy a wedding dress, stop looking at other dresses!” she says. “You don’t want to end up buying two like me!”

Did your wedding have the wow factor like our getting married in Spain feature? If you would like your big day to be one of our real weddings send your favourite photo to info@wed2b.co.uk and we’ll be in touch!