A stylish hotel in Cyprus was the perfect location for these newlyweds. Our WED2B Real Wedding Abroad feature reveals more: Aimee and Kevin met at a local bar called The Bank, where Aimee worked, “Kev often visited and, on one...

A stylish hotel in Cyprus was the perfect location for these newlyweds. Our WED2B Real Wedding Abroad feature reveals more:

Aimee and Kevin met at a local bar called The Bank, where Aimee worked, “Kev often visited and, on one occasion, I remember him ordering an obscene amount of drinks to his table,” she says. “I thought to myself, ‘what a show-off’. He later told me he ordered them to make me turn up at his table! We started talking a little while after that, and eventually, he asked me to meet him for a date. We had a few drinks together and hit it off immediately!” 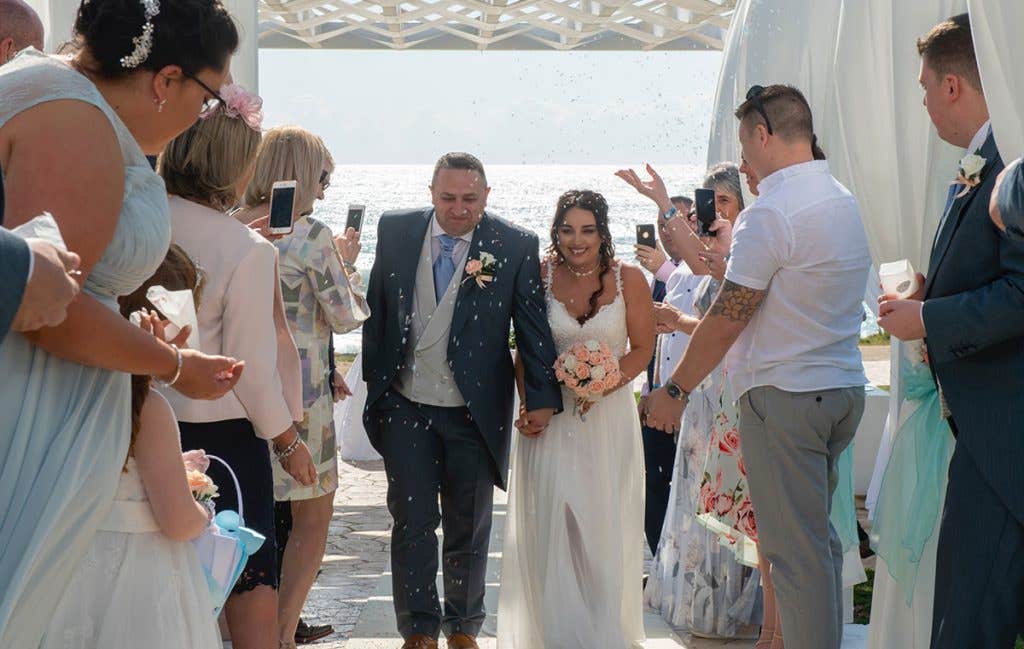 The couple had already discussed getting married before Kevin proposed, and had even shown each other engagement rings. “The night before he proposed, Kev ran me a bath and lit candles all the way around the bathroom,” says Aimee. “I remember thinking that he was up to something, like asking if he could go out with the boys or watch the footy! The following morning he made me breakfast in bed and asked his son, Dylan, to come into the bedroom. When I turned around, he was down on one knee with this beautiful engagement ring! I said yes, of course. We’d planned to go to the football that day, as Kev is a sponsor for Swindon Town, and has a table in the suite. When we got there he had champagne on ice ready to celebrate!” 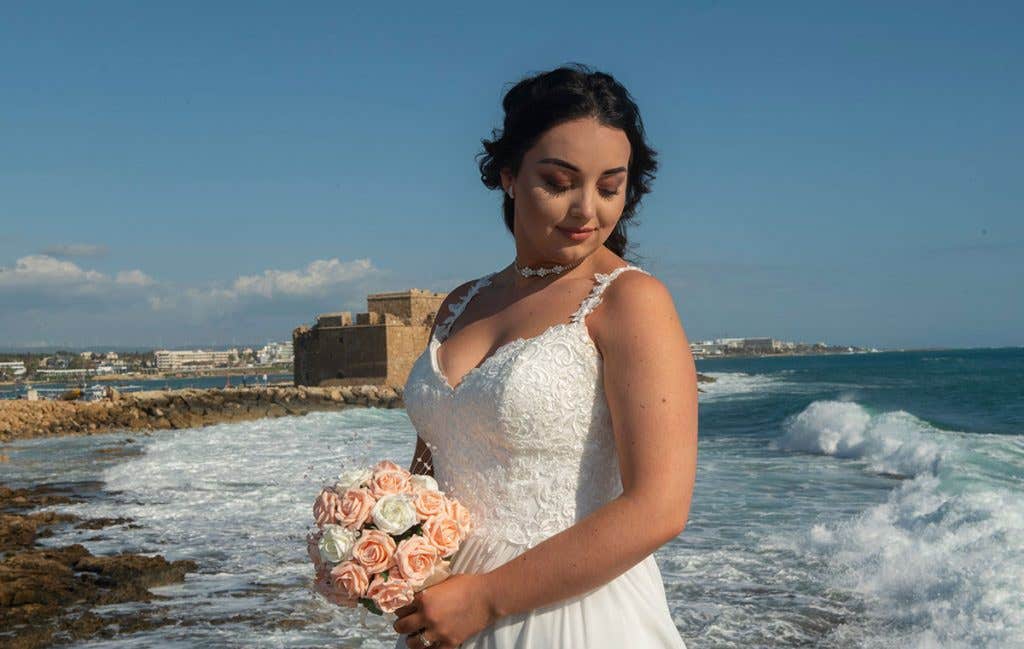 Aimee found her dress at WED2B Swindon. “I had three appointments booked that day at boutiques in Bath and Bristol” she says. “But I had a bit of time in the morning, so my friend suggested popping into WED2B first. When I got there I instantly felt comfortable and the staff were so friendly and helpful. The changing rooms were amazing, so much space and really magical. I wasn’t planning on picking a dress at all, just trying some on. Blair was the second dress I tried on and I absolutely fell in love with it! It flattered my figure and felt so comfortable. My sister and Mum were both in tears, so I knew this was the dress for me. I tried on a few other dresses but nothing came close, so I cancelled my later appointments and put a deposit on the dress there and then.” 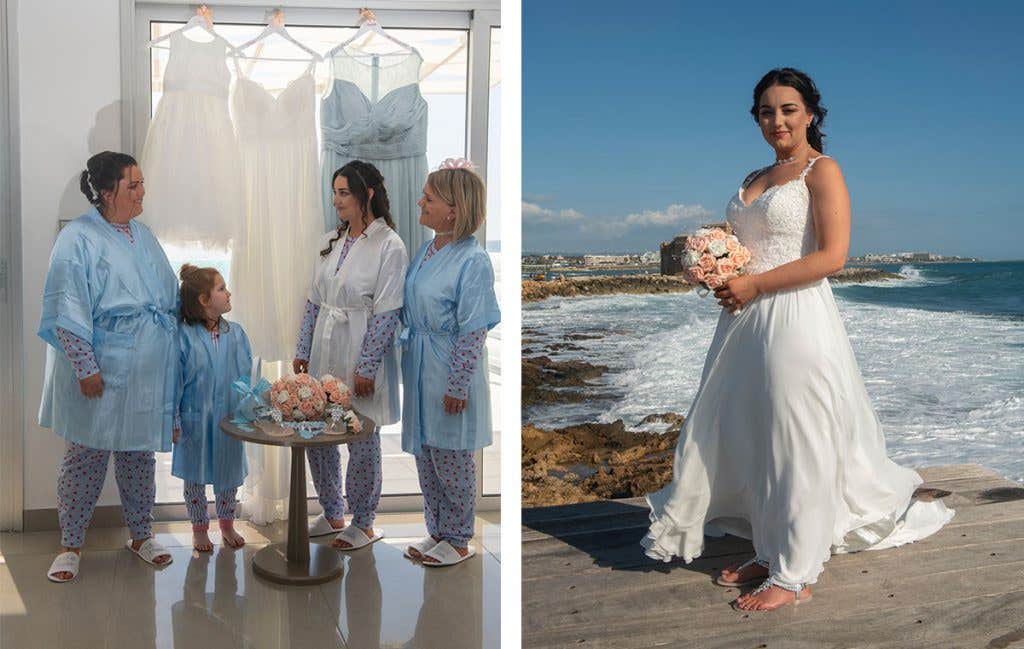 A wedding abroad in Cyprus

The couple chose Cyprus for their big day, as Aimee had lived there as a young girl when her Dad was stationed there by the army. “Although I don’t remember it, I knew it would be perfect for our wedding abroad, as I didn’t want a big do,” she says. “We looked at venues online and I found the King Evelthon Spa and Hotel in Paphos. I fell in love immediately with the bright rooms, the big pool overlooking the sea and the outdoor ceremony space. I emailed the wedding department and I was added to a social media group full of brides who were getting married in one of the Tsokkos hotels in Cyprus. It was a group of angels! All my questions were answered by them or my wedding planner, Anita, who was an angel too! We married on 14th March 2019, four days before my birthday.” 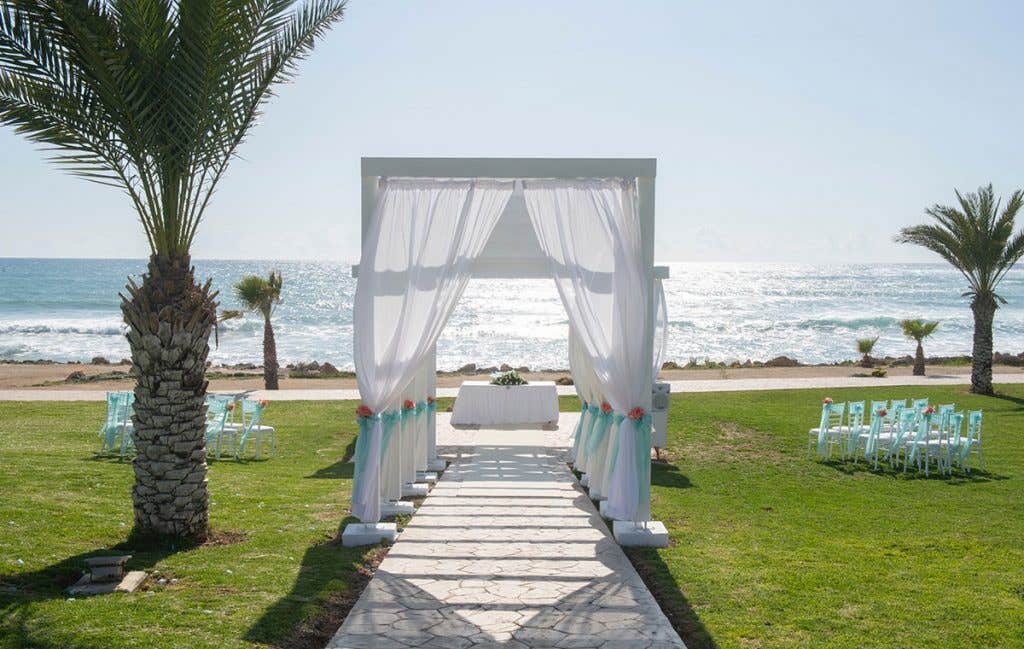 A rush to catch the flight…

The wedding date approached and the couple were booked to fly from Birmingham to Paphos on an early morning flight with 16 family and friends. “I booked a mini bus for everyone but it didn’t turn up! We rang them frantically and it turned out they had put the booking down for the next morning. They couldn’t get another minibus to us in time, so we ended up booking two taxis while three of us drove. By this point we were very late and when we got to the airport the flight was already boarding. We ran to the baggage drop desk and the Jet2 staff rushed us through express security and straight to the gate. I couldn’t fault the Jet2 staff at all, we were so lucky to make the flight!” 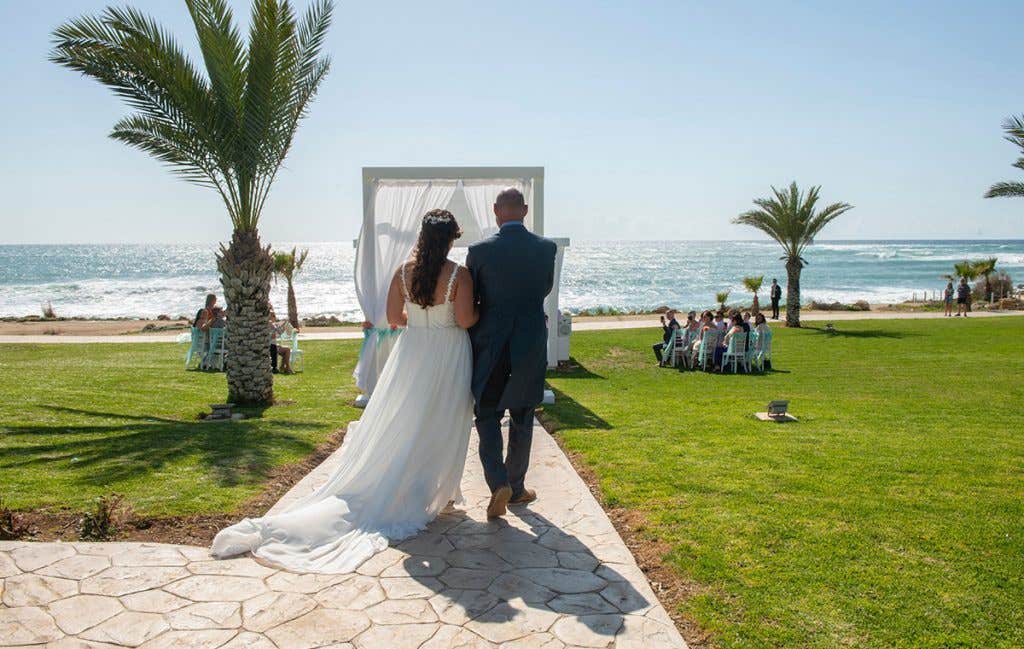 “Our ceremony was short but that’s how we wanted it,” says Aimee. “We don’t like being the centre of attention, so the shorter the better! We had a beautiful outdoor venue called Tiffany Blu, which overlooked the sea. There were thunderstorms the day before, so we were worried about the weather, but it was beautiful. The sun was shining, there was a cool breeze and the waves were still crashing against the rocks from the storm, which made for some beautiful photos. I walked down the aisle to ‘All of Me’ by John Legend. As I got to a certain point, Kev’s best man, Jason, told him to turn around. As soon as he did, he started to cry. It was my favourite moment from the whole wedding, and I will forever cherish the memory.” 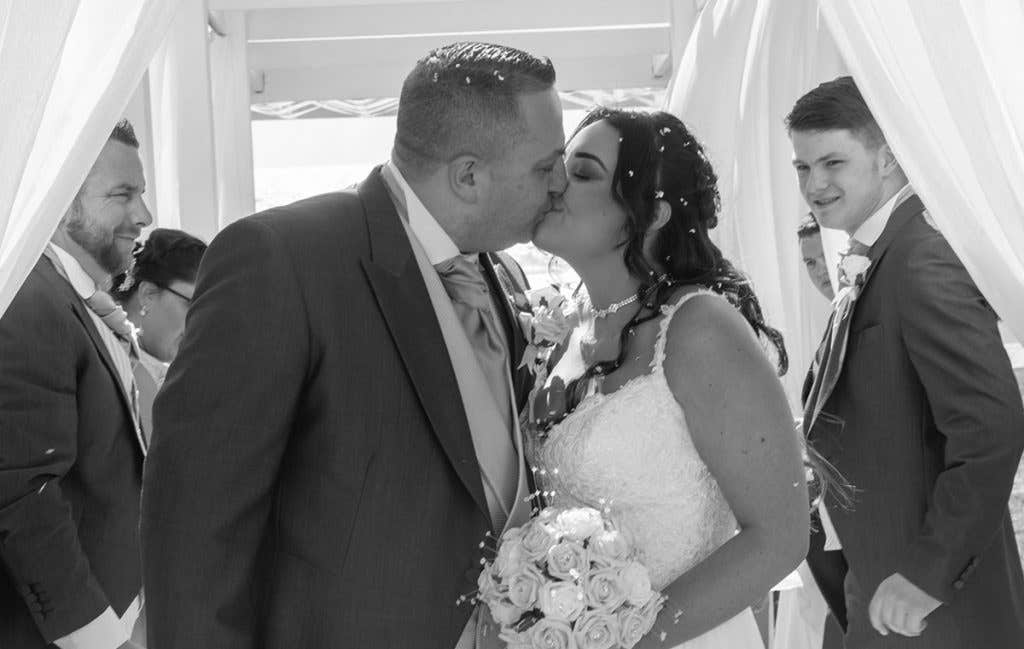 “After our perfect ceremony we had a few location photos then we all went on an open-top bus tour!” says Aimee. “It was so amazing, and fun. For an hour, our small wedding party of 26 sat on the top on the open-top bus, with music blaring and champagne flowing, driving around Paphos waving at anyone that would wave back! A lot of our guests have said this was their favourite part of the day.” 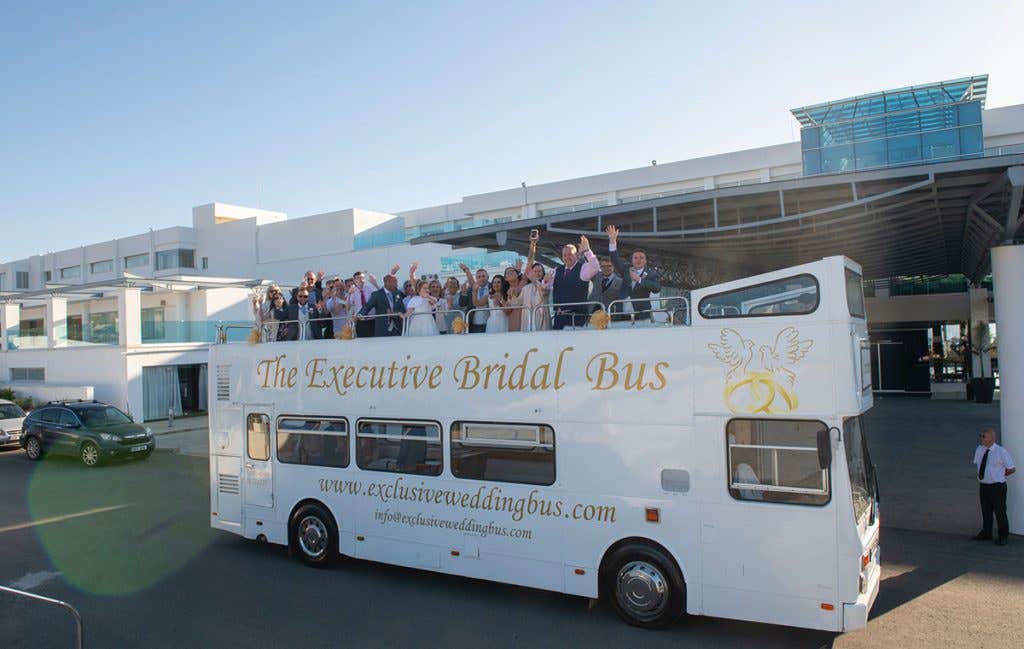 This was followed by the wedding breakfast in the hotel’s ballroom. “We were supposed to have the rooftop bar, however the weather was looking uncertain, so we thought it best to have the reception inside,” says Aimee. “We went for a beach theme for our wedding abroad and the colours were a light blue and a coral/peach. Some of the décor was hired from a company in Paphos and we also made our own little bits, such as name cards, favours and menu lists, too. The venue looked so beautiful. My favourite part was the memory ladder, where we put pictures of all our loved ones who unfortunately aren’t with us anymore." 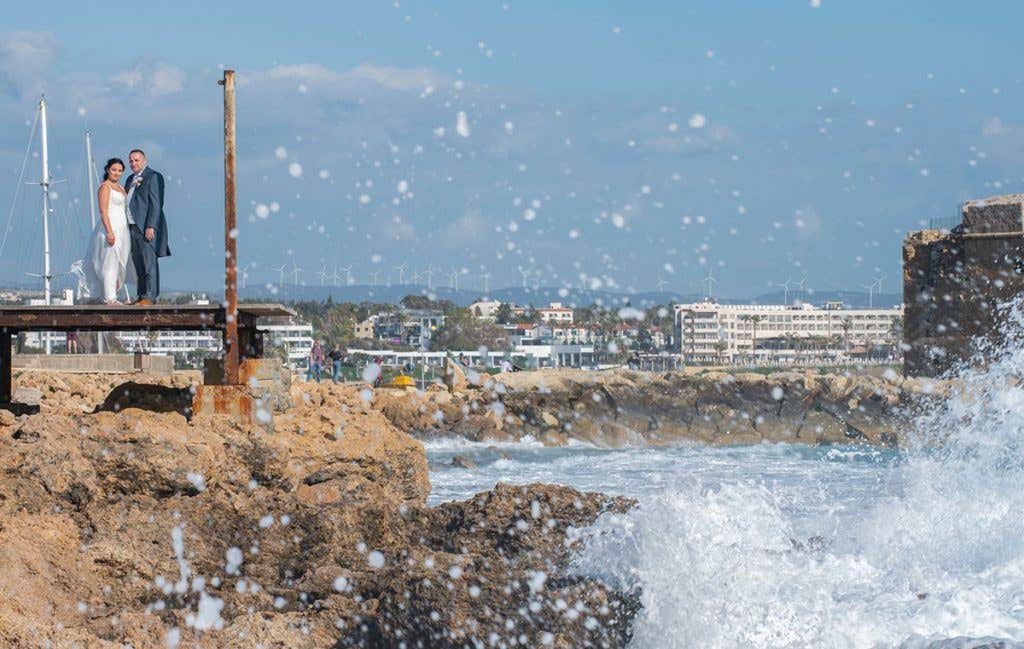 After everyone had eaten it was time for the party to start. “As an amazing surprise, Kev had booked a private singer,” says Aimee. “I’d always said that I would love to have Billy Ocean at my wedding, but he was a little too pricey! So Kev secretly booked a wedding singer and he was unbelievable. Everyone was on the dance floor and the Billy Ocean songs were a massive hit! We danced through the night and, although there were only 26 of us, the dance floor was never empty." 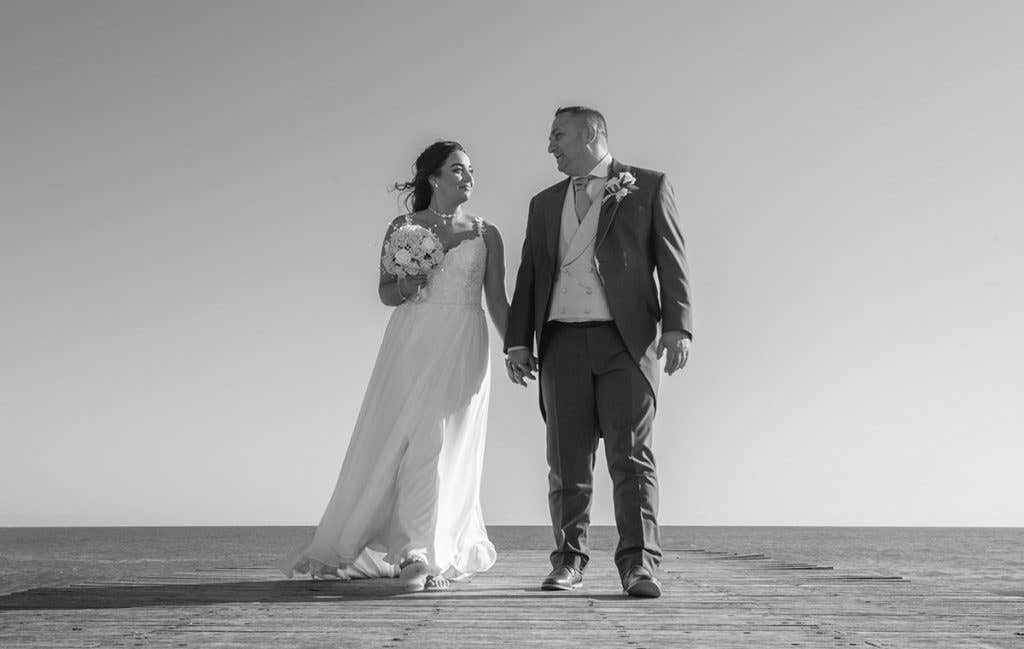 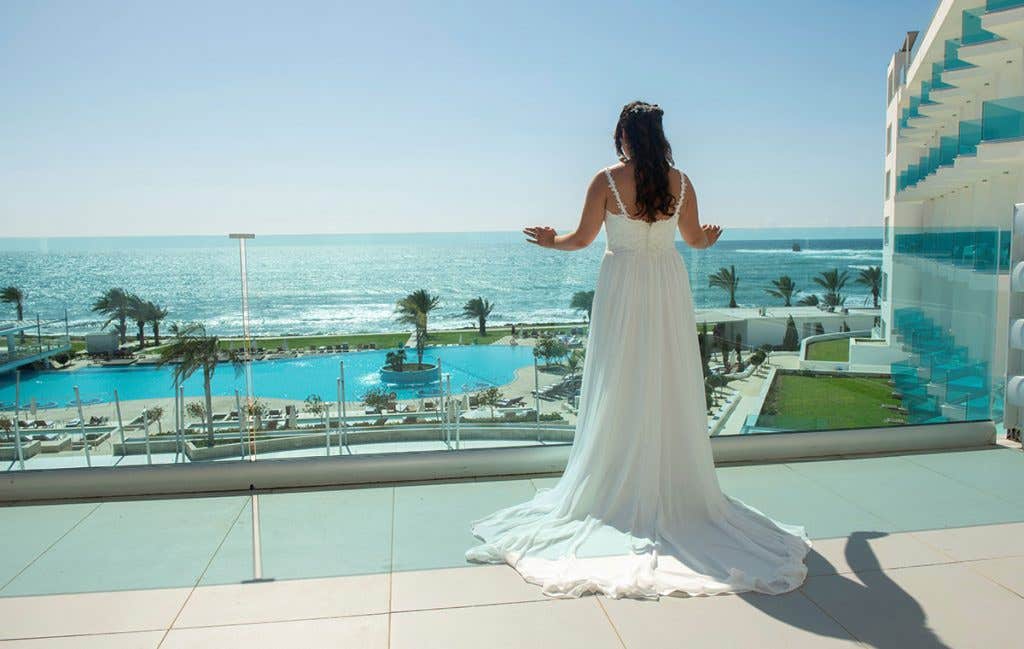 "If we could do it all again, I would have more people,” she says. “But if you’re worried that there won’t be enough people for a good afterparty, please don’t. It will be perfect!”

Did your wedding have the wow factor like our wedding abroad feature? If you would like your big day to be one of our real weddings send your favourite photo to info@wed2b.com and we’ll be in touch!