Real Weddings Wrexham: Dragons and Welsh slate were the perfect decor for these newlyweds

Nicole and Adam had a magical wedding day, decked out with dragons and Welsh slate, despite quite a few hiccups! Our WED2B Real Weddings feature reveals more: A chance meeting... Nicole and Adam met in a nightclub in Newcastle in...

Nicole and Adam had a magical wedding day, decked out with dragons and Welsh slate, despite quite a few hiccups! Our WED2B Real Weddings feature reveals more:

Nicole and Adam met in a nightclub in Newcastle in 2010. “I saw Adam and fancied him, but I was with a male friend and I thought Adam would think we were together,” says Nicole. “My friend tapped him on the shoulder and said, ‘Mate, we aren't together and she fancies you’. I was so embarrassed I ran away! Later on, I saw Adam on his own, so I ‘bumped’ into him and pretended to have lost my friends, so he asked me to have a drink with him. Secretly my friends were all behind his back giving me the thumbs up! Our first date was to an Italian restaurant and then for a walk along the Newcastle quayside. Adam was studying at Leeds University at the time, so we didn't actually get together until December 2012, when he moved back to Newcastle.” 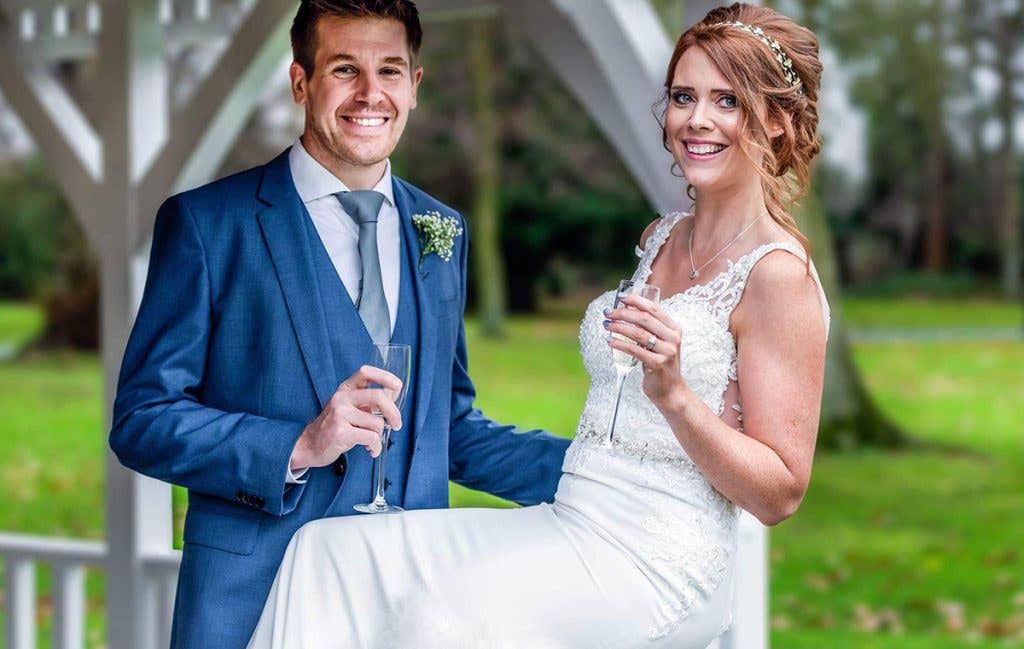 The couple were on a private yacht holiday in Vietnam when Adam first tried to propose. "Just before the holiday we found out I was pregnant” says Nicole. “It was planned, but happened much faster than we expected! So I was around eight weeks' pregnant while we were touring around Vietnam and Cambodia. Adam planned to propose on an overnight boat trip around the beautiful Ha Long Bay. Let’s just say that morning sickness, boats and eight-course dinners didn't mix well and I ended up in the cabin sleeping off my nausea. Proposal plan ruined!” 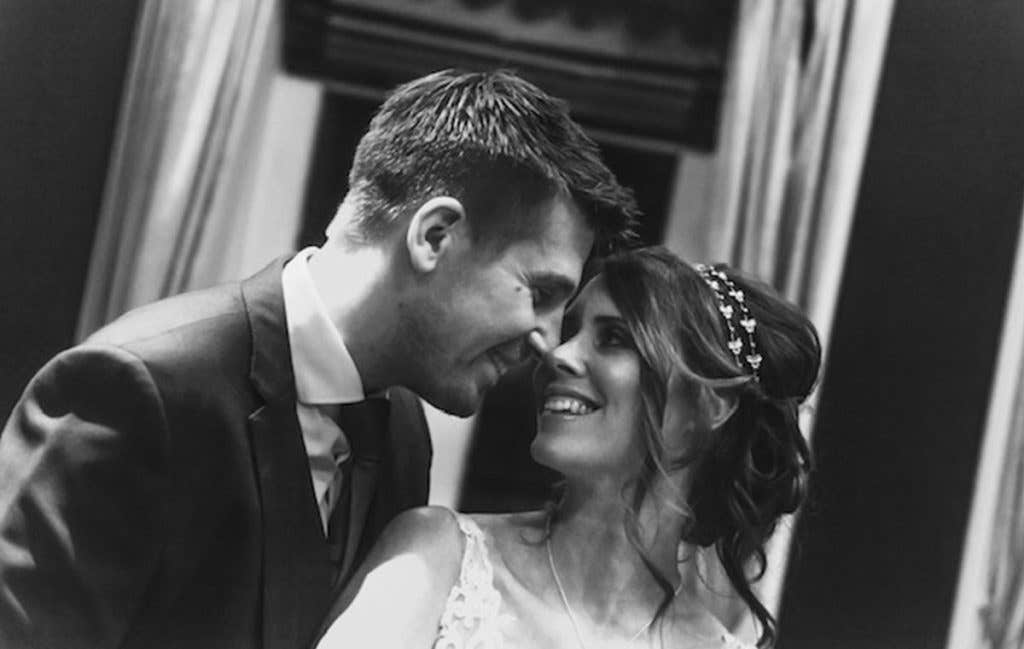 Adam tried again in Nicole’s home town of Conwy, North Wales. “I did have an inkling it might happen, but in typical Welsh fashion it ended up raining” says Nicole. “After he told me his plans were ruined, I said not to worry and took him to my favourite beach instead. We threw on wellies and went walking in the rain, so I wasn’t expecting a proposal. I was telling him how I used to come to this beach as a child and then turned around to find him down on one knee in the wet sand. He said, 'You came here when you were a child, you can come back when you're a mother and I would love you to come back here when you're my wife'. It was a big shock and very low key and sweet. We went for fish and chips afterwards!” 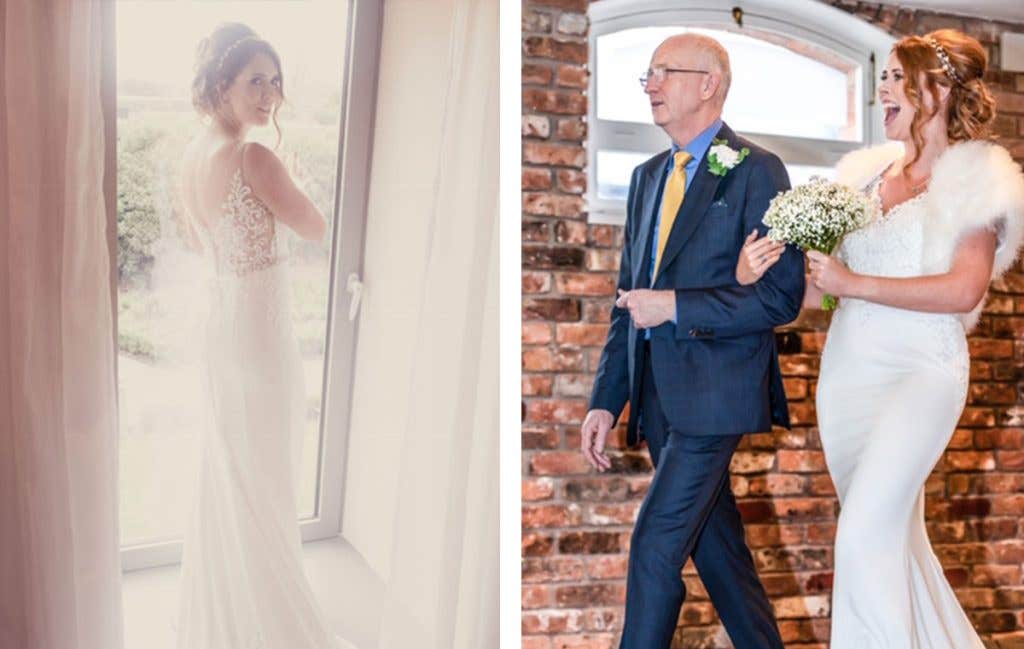 Nicole visited WED2B’s Wrexham store. “We decided to marry shortly after having our baby, as we wanted to plan number two,” says Nicole. “So, we had six months to plan the wedding. I’d already tried on dresses in a boutique in London and another in North Wales when I visited WED2B, and I was quite down about not finding anything. The lovely staff at WED2B helped me try on almost every dress! Sawyer fitted me almost perfectly and I loved it. It was different to most of my friends’ dresses and flattered my figure. I’m not a girly girl and it was quite simple but with lace and the beading that made it a little bit flirty and fun. The WED2B staff were amazing. I even bought the lady that helped me a bottle of fizz, as I was starting to think I would never find The One!” 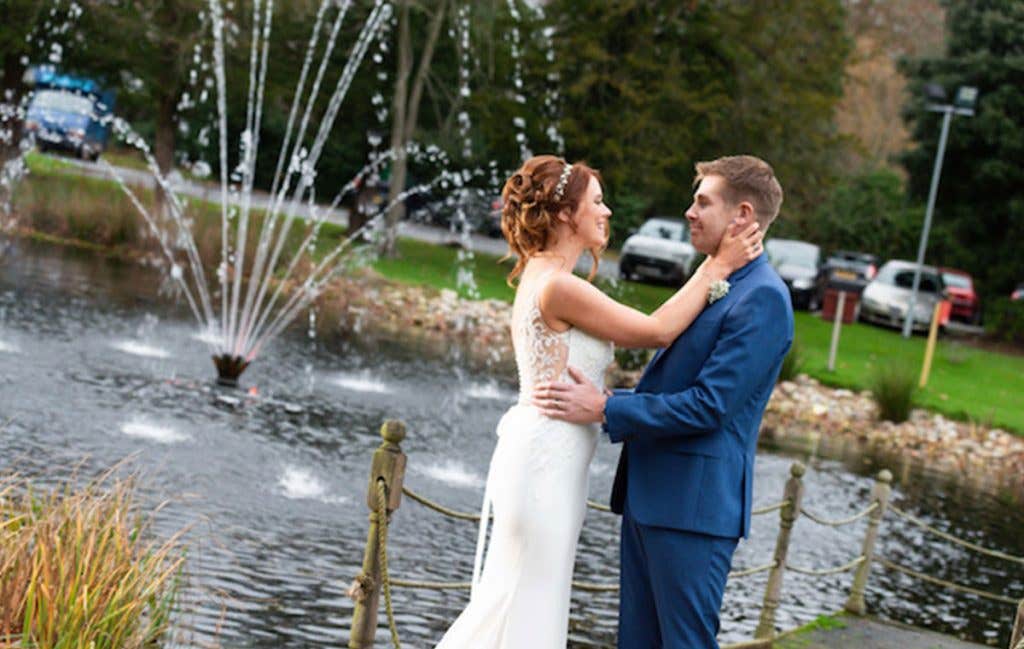 Nicole also bought an ostrich feather shrug and a gold headpiece. “The shrug was perfect for the winter weather and the lovely gold headpiece suited my hair colour,” says Nicole. “Finally I added a glittery belt for a little bit of sparkle and to highlight my waist.” 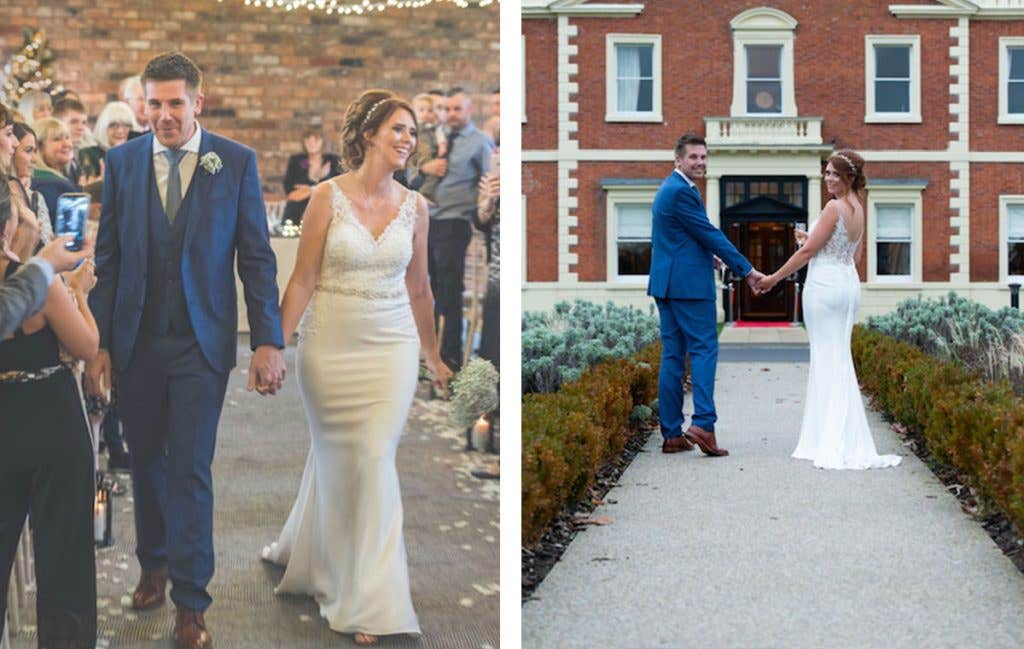 The couple originally chose a barn-style venue. “I wanted to get married in North Wales where I grew up,” says Nicole. “This venue was recommended by friends and it was close to my parent’s house. When I first saw it I got butterflies. Even the baby started to laugh and coo, so I knew this was the one.” 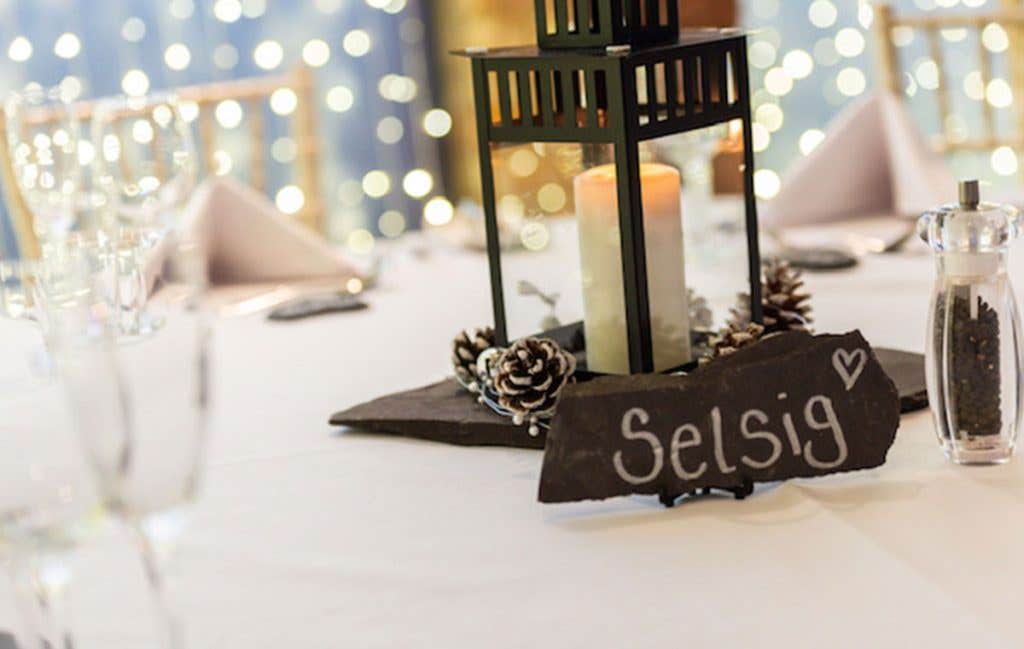 A change of plan…

“Unfortunately our venue went bankrupt eight weeks before the wedding, which we found out via the local press” says Nicole. “The venue told us they were hoping to continue with weddings but my Dad persuaded me to not take the chance. We lost our deposit but didn’t want to risk not having a venue, as we had guests coming from Singapore, Thailand, New Zealand, Australia and Myanmar!” 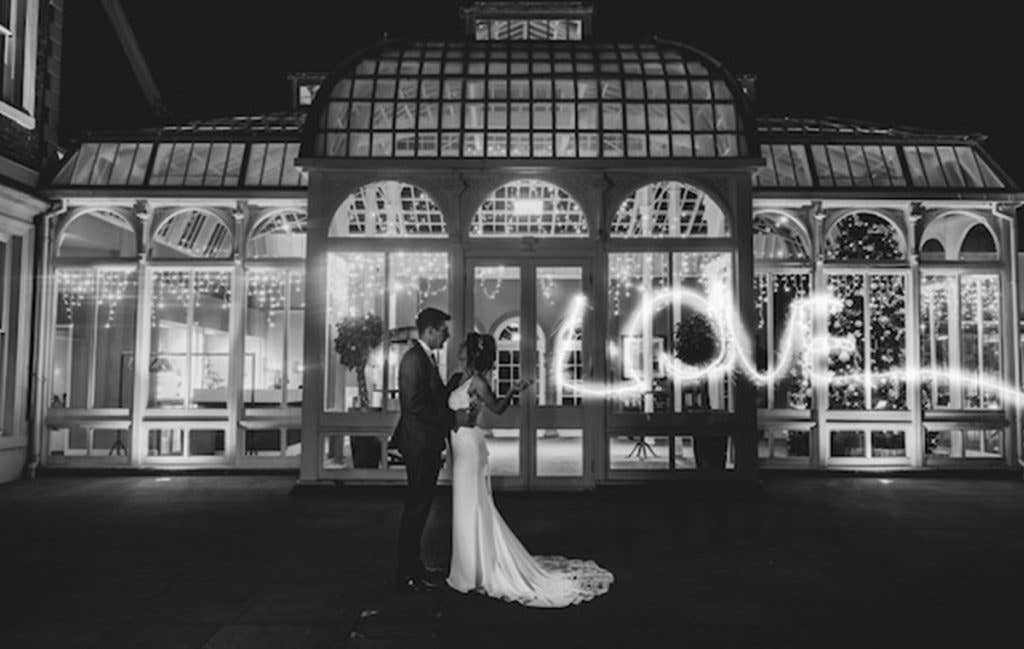 Finding a new venue from overseas

“Adam is a contractor and at this point we were based in Singapore for three months, before returning to the UK for two months just before the wedding,” says Nicole. “We had to arrange a new wedding venue over Facetime with my parents. We found another barn, The Double Tree Hilton in Chester, and they had availability, so we felt very lucky. With such short notice we had to pay in full, up front, without even seeing the venue. We finally flew home 10 days before the wedding and managed to see the venue. Fortunately we loved it!” 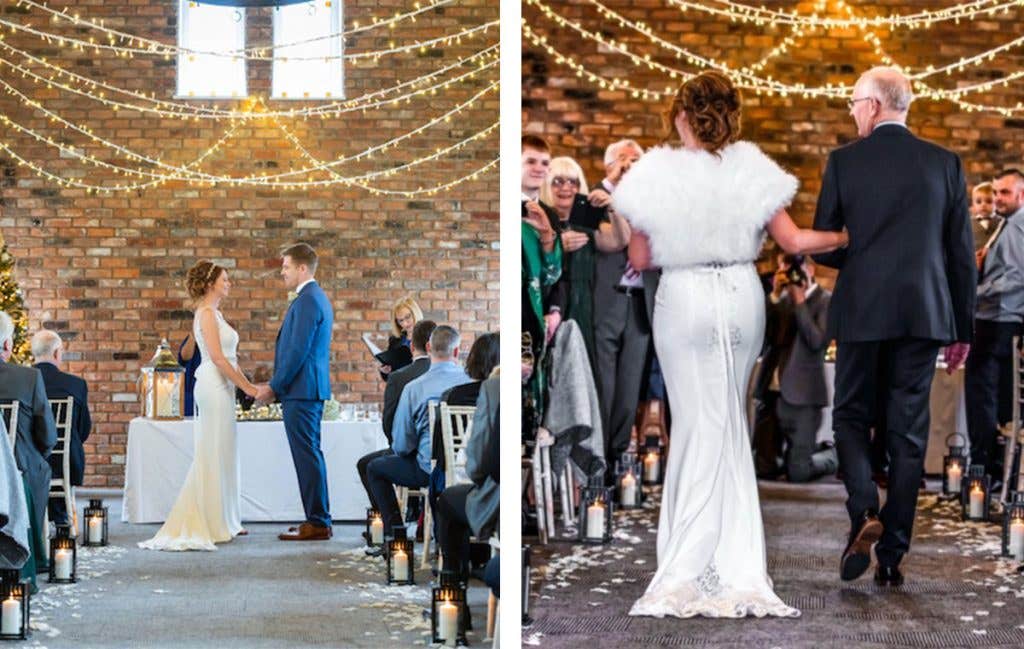 The wedding date was 30th December 2018. “I got up with my daughter and went to breakfast with the other guests in the hotel,” says Nicole. “Then Adam, who had stayed in another hotel, arrived to use the steam room with his groomsmen, so my bridesmaids and I had to hide in the bridal suite. Unfortunately the air-con was broken and stuck on 26℃, so we had to move room!”

“Due to the last minute venue change, we also didn't know until the morning of the wedding if the registrars would accept the emergency move of wedding notice,” says Nicole. “If they didn't accept us getting married in the new venue, the old registrar from North Wales was going to do a mock ceremony. Then we would have to get married in the town hall a few days later. But fortunately the registrars managed to accommodate us. Strangely, I was never stressed about the venue change. I always think everything happens for a reason and I think the new venue was potentially better than the original one!” 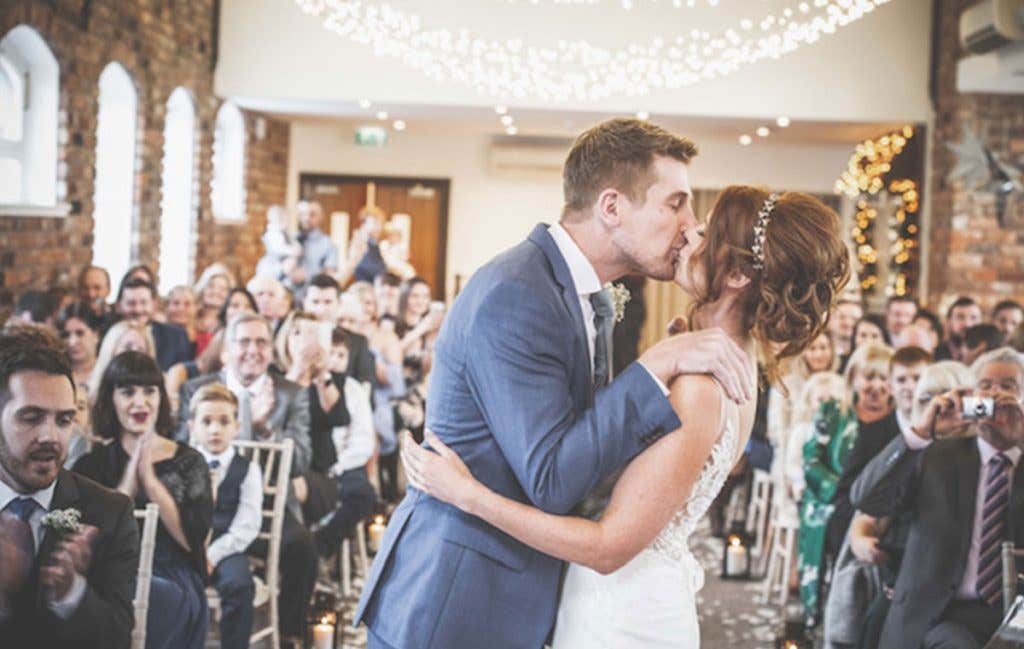 “Our barn ceremony room with its twinkly lights was just so cute,” says Nicole. “It felt really magical. My Father, who I absolutely idolise, walked me down the aisle to 'How Long Will I Love You' by Ellie Goulding. My favourite memory is walking down the aisle. I was so overwhelmed and happy to see all my guests that I didn't see my hubby-to-be until I got to the end. I was too busy hugging and kissing everyone all the way down! Also, I loved seeing my little girl, who had just learnt to walk, running into her Daddy’s arms at the end of the aisle.”

“A family member was planning to drive the groom and his groomsmen to the venue in his old vintage car, decorated with Newcastle United scarfs,” says Nicole. “Unfortunately, the wedding car was cancelled due to family issues. So the lads ended up driving themselves! We also forgot to throw the confetti, which was a shame as my Mum had spent months picking it from her garden and drying it in the airing cupboard. One of the guests had a tiny packet, so a few people threw a couple of handfuls on us. Oops!” 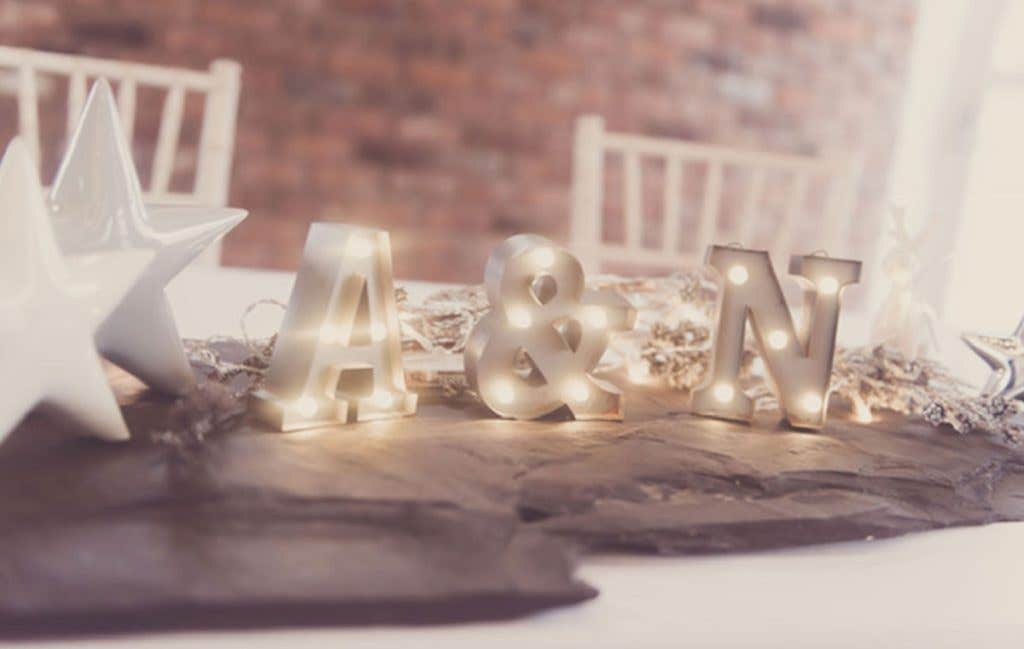 The day also had a Welsh slate theme. “I had a large stone Welsh dragon, who sat on the entrance table,” says Nicole. “I decided I also wanted large bits of Welsh slate to sit in the middle of the table, with lanterns on top, as I’m not really a flowery person. Slate tiles were quite expensive, so I asked my 62-year-old Father to climb a Welsh slate slag heap with me to find 10 large Welsh slate offcuts for the middles of the tables! We then had to carry the baby and use her pram to cart the Welsh slate down the hill. I think it nearly broke the suspension but it looked fabulous on the day. The venue loved my theme so much they asked to keep all my Welsh slate decorations!” 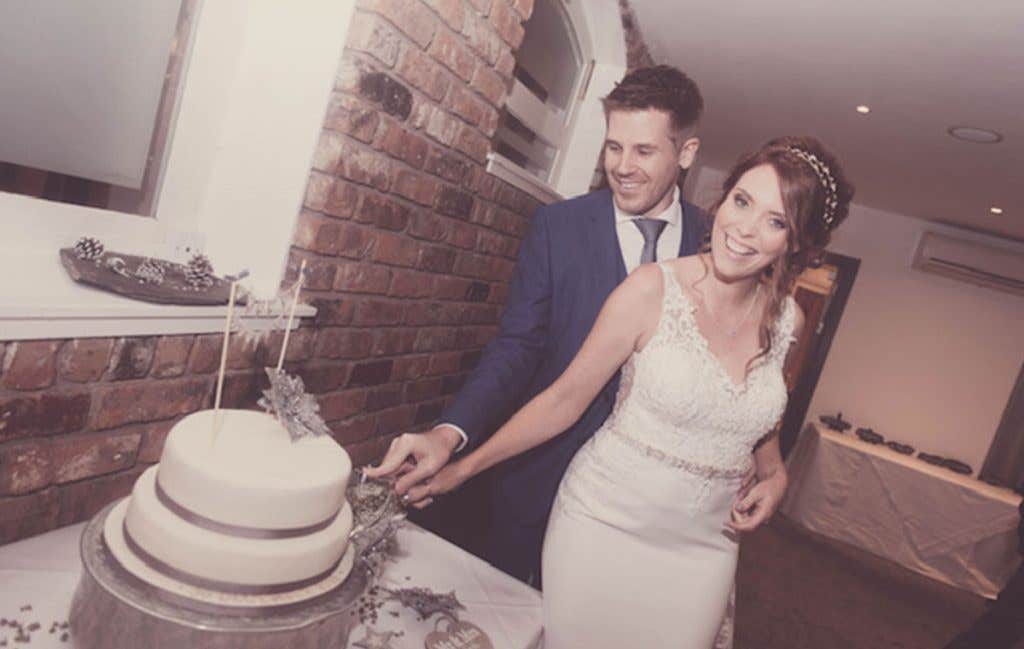 “I also decorated around the lanterns with wired pearls and fur cones,” says Nicole. “I love being creative, so I always knew that I wanted to do a  lot myself. The favours were a Welsh slate coaster, with guests’ names written on, which I did myself too. My husband is a Geordie, so the table names were half Geordie words and half Welsh words. I also hung large grey and silver stars throughout the venue, along with a canopy of fairy lights and a rustic, light-up LOVE sign. There was a box of lovely soft blankets too, but they were forgotten about. I didn’t actually notice until three days later!” 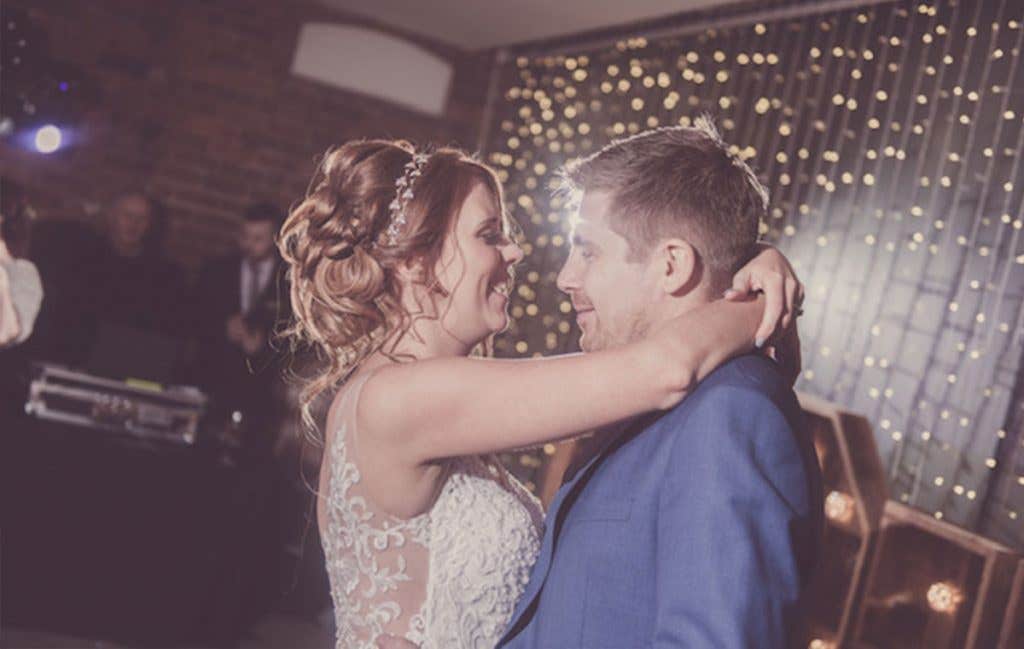 After the ceremony there were drinks before everyone sat down for the wedding breakfast.“We did the speeches first and I gave a speech and I also wrote my own personal vows,” says Nicole. “We then had a band in the evening and a DJ after that. There were supposed to be sparklers, but we forgot to do them too. I think we were just having too much fun!”

Just when they thought nothing else could go wrong, the DJ played the wrong version of the newlywed’s first dance song.”We had to do it again, once he'd managed to download the correct version,” says Nicole. “The song was ‘Indian Summer’ by the Stereophonics, but the first version he played had no words in it. It was the words that made us choose it and Adam always said the lyrics reminded him of me.” 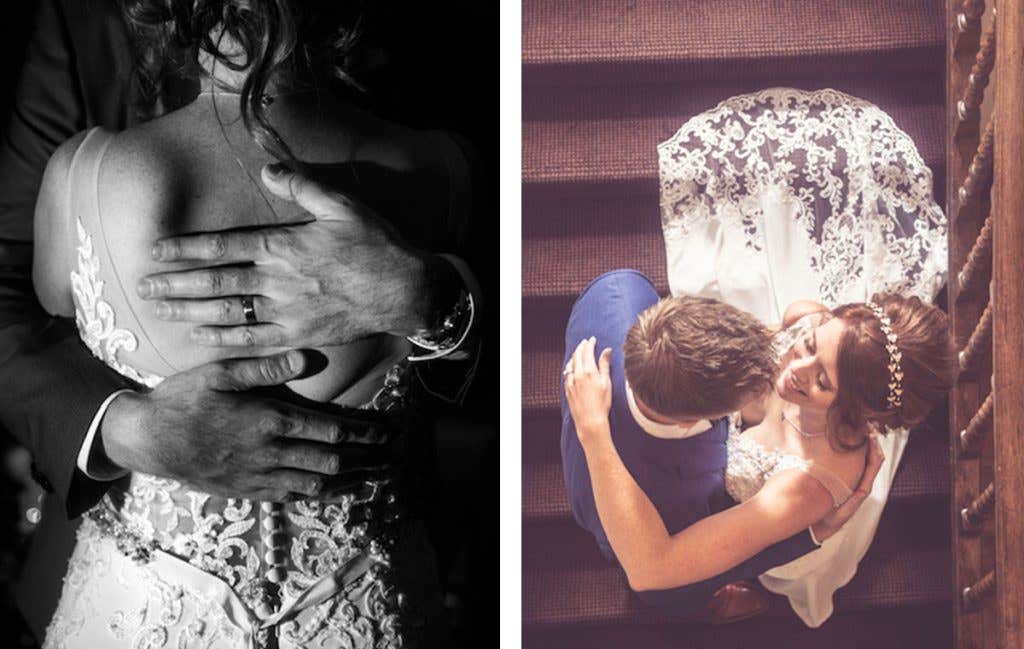 “The most fun moment was at the end of the night,” says Nicole. “Only about 25 of us were still up. The DJ decided to play our first dance song for the third time and this time my new husband was spinning me around and lifting me up!

"My top tip is really to enjoy every single second of the day. Don't stress, you really don't notice anything that goes wrong on the day!”

Videographer: Love Story For Us  (lovestoryforus.com)

Did your wedding have the wow factor like our Welsh slate wedding? If you would like your big day to be one of our real weddings send your favourite photo to info@wed2b.co.uk and we’ll be in touch!