This happy couple crossed the Atlantic for a New York wedding to remember. Our WED2B Real Weddings feature reveals more…

This happy couple crossed the Atlantic for a New York wedding to remember. Our WED2B Real Weddings feature reveals more…

Amy and Mark first met on a night out in Belfast. “I was with my friends and Mark was with his,” says Amy. “I approached him to tell him he looked like Super Mario because he was wearing brightly coloured chinos and a bright top, a strange combination! We exchanged phone numbers and went for a Starbucks coffee a few days later.” 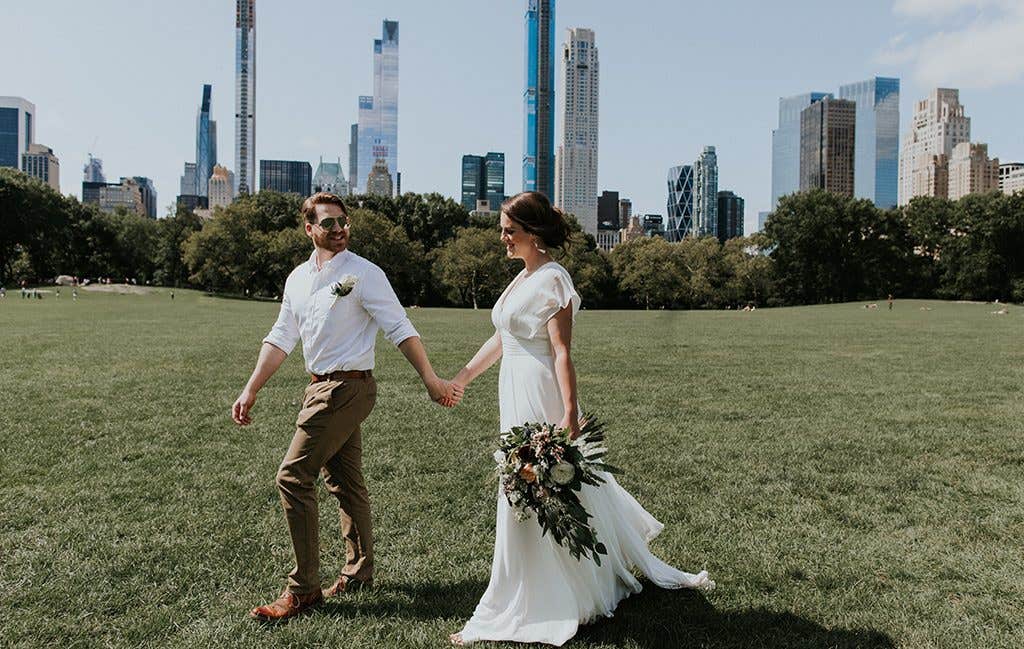 Mark proposed at a spot near where the couple live. “It’s called ‘The Hole Stone’ in Northern Ireland and it’s an ancient wedding site,” says Amy. “It sits on a fairy hill and to be married the woman would put her hand through the hole. We had a picnic there with sandwiches and bubbly and then Mark proposed.” 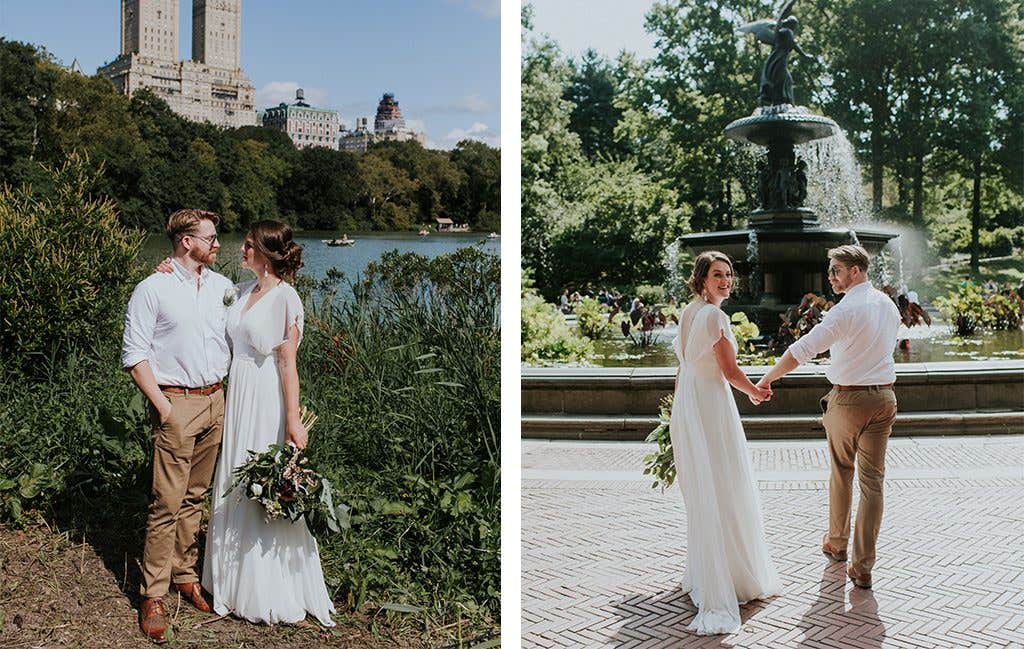 “I purchased my dress in WED2B in Belfast,” says Amy. “My wedding planner, who is based in Birmingham, mentioned that she got her dress there and googled to see if there was one in Ireland. I went along and pulled out a few styles that I thought I would like. My mum also gave me a bit of a ‘wild card’. This was a dress I wasn’t keen on at first glance but tried on just to humour her. It was Ashley and I ended up loving it! At that moment I knew it was the dress for me but it also ticked all the boxes in terms of practicality and functionality. I was getting married abroad, so I needed something light and would transport well. The shop assistants were also great at helping me find a selection of dresses that suited those requirements.” 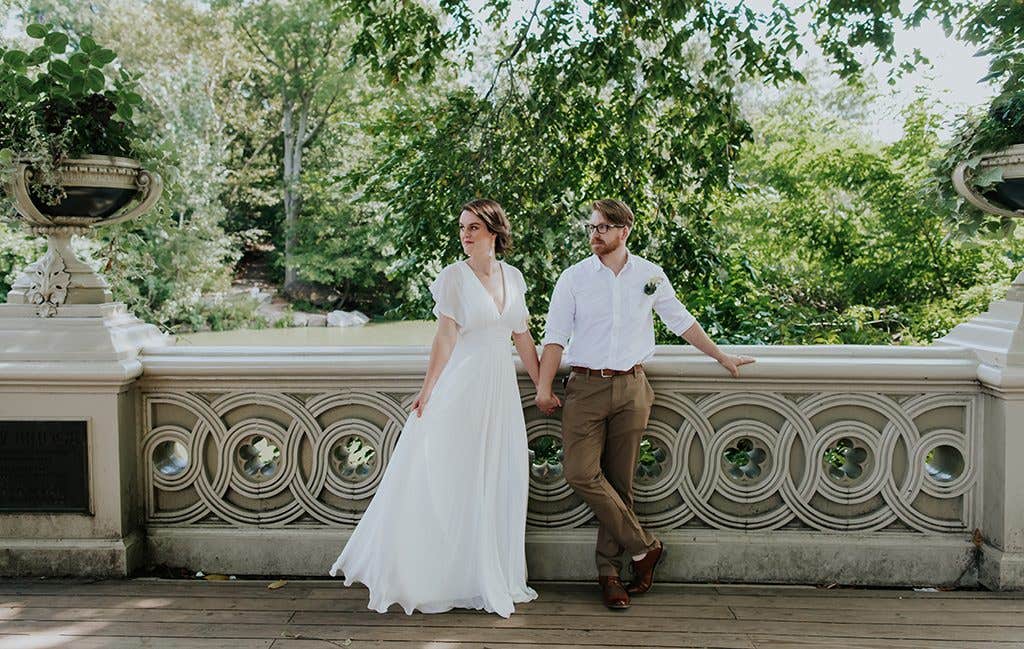 “We chose to have a New York wedding for several reasons,” says Amy. “Finances, flexibility, adventure, something a bit different, plus we just didn’t really feel like a big wedding was us. We held our New York wedding in Central Park, as we’re both outdoorsy people and we knew we would get stunning photos of greenery, coupled with the iconic New York skyline.” 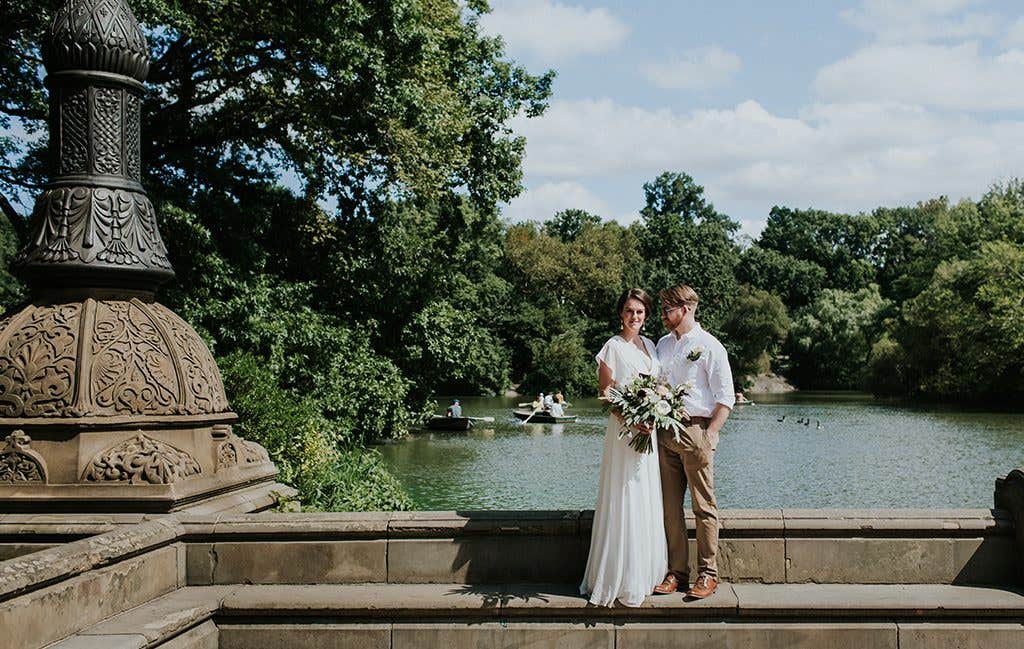 The couple married on 25th August 2019. "It was a really simple day,” says Amy. “We got married on a Sunday, quite early in the morning, to escape the crowds and to get the best light. We got ready in our hotel and then took a beautiful vintage cab to Central Park for our ceremony. It was a short ceremony but very intimate and personal. We read our own vows on a jetty called Wagner Cove, which sits on one of the lakes in Central Park. Then we had a walk around the park and took our photos, followed by ice cream! Later we went back to our hotel for a few celebratory drinks before dinner in the Plaza that night.” 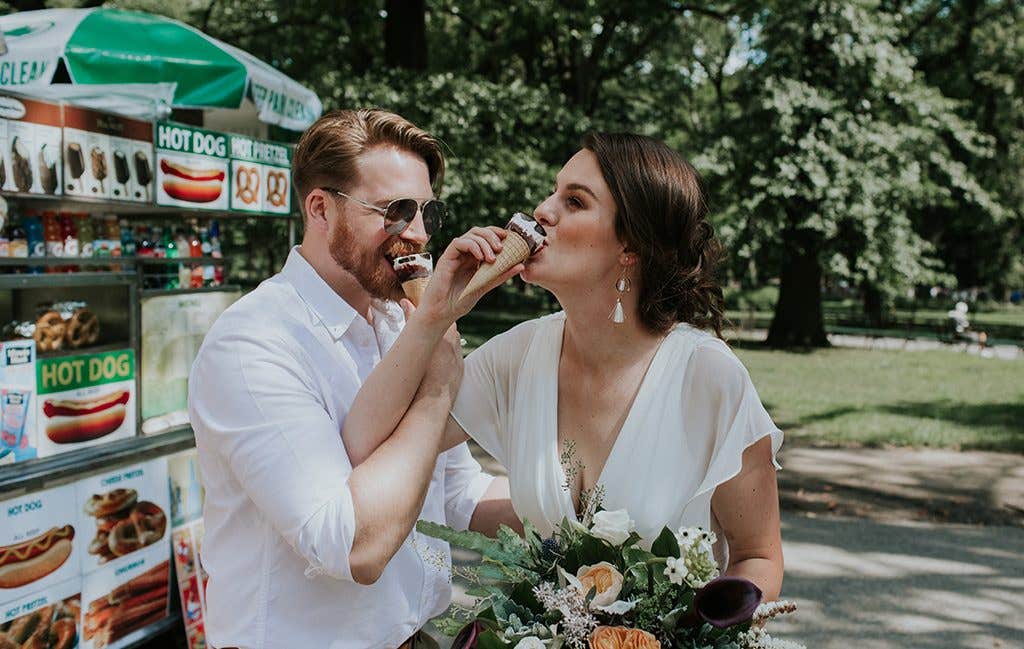 “We had a very outdoorsy theme with the iconic NYC as a backdrop,” says Amy. “A vintage taxi also gave our photos that instantly recognisable NYC vibe. We didn’t have a cake on the day but had a party for family and friends when we got home, and a family friend made us a cake. It was a three-tier, naked cake with layers of carrot, white chocolate and angel cake.” 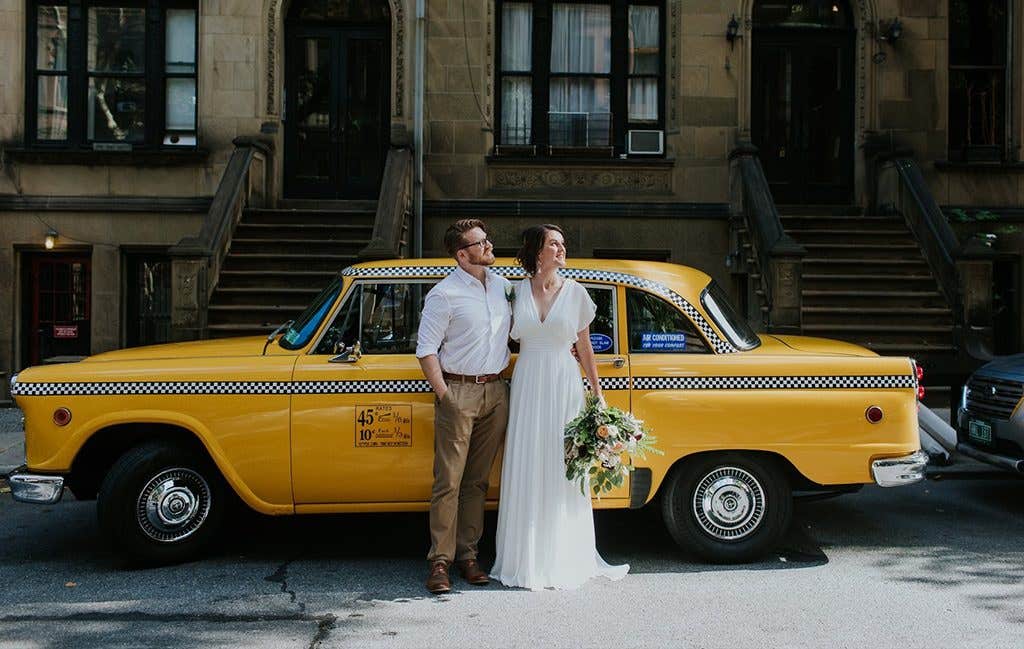 “Make your day the way you want it,” says Amy. “And don’t feel pressured to do what people say you should do. Don’t buy wedding magazines and also don’t immediately start browsing expensive boutique wedding dress shops. There are better, more efficient, less stressful and cheaper ways of doing things. So, take a moment to consider what’s important to you and you may realise that the traditional aspects of a wedding don’t even feature! Just make it as enjoyable and relaxing an experience as possible." 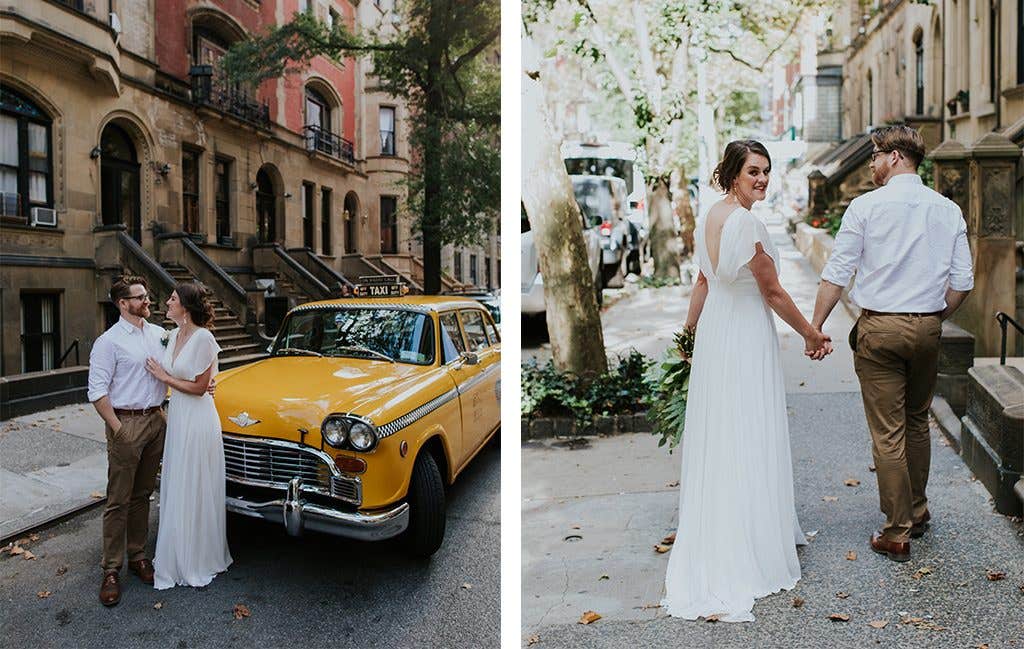 Ceremony: Once Upon A Vow (onceuponavow.com) 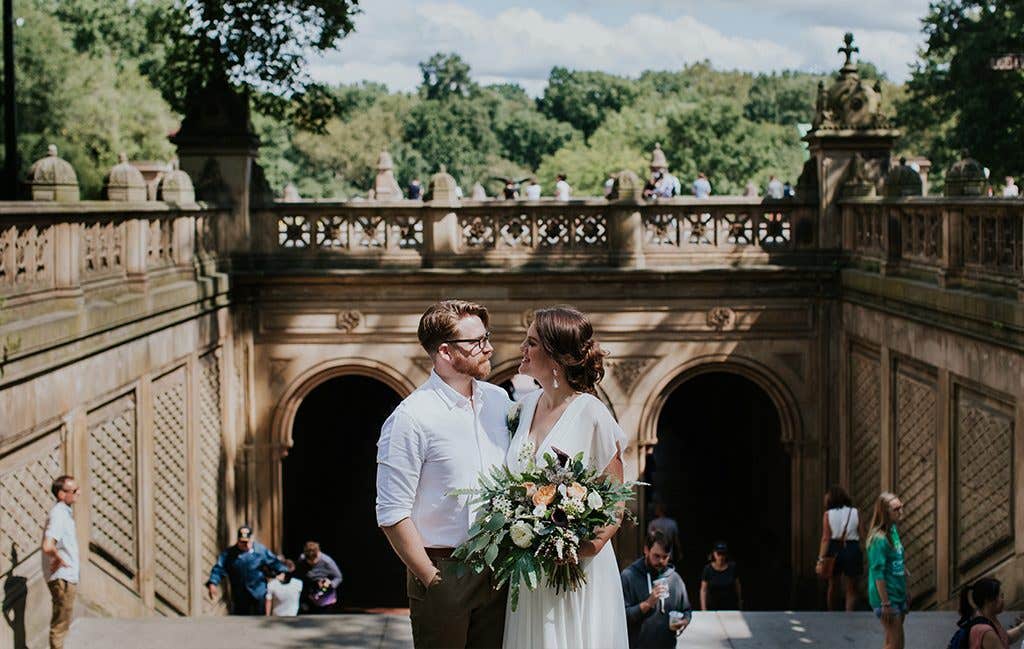