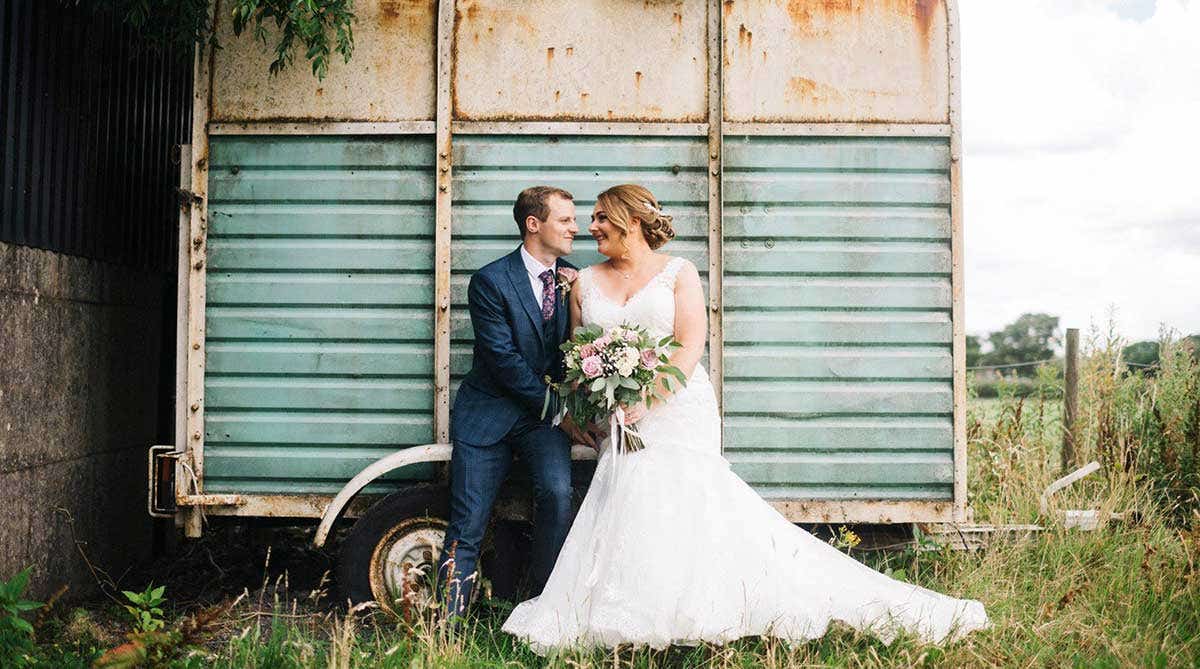 Tom and Rebecca first met when they were 13 years old at a youth club run by their village church. “We were friends for a while but we eventually became official when he asked me on a date, just after finishing high school in 2009,” says Rebecca. “We went to the cinema and for a walk along the beach at sunset. It was perfect." 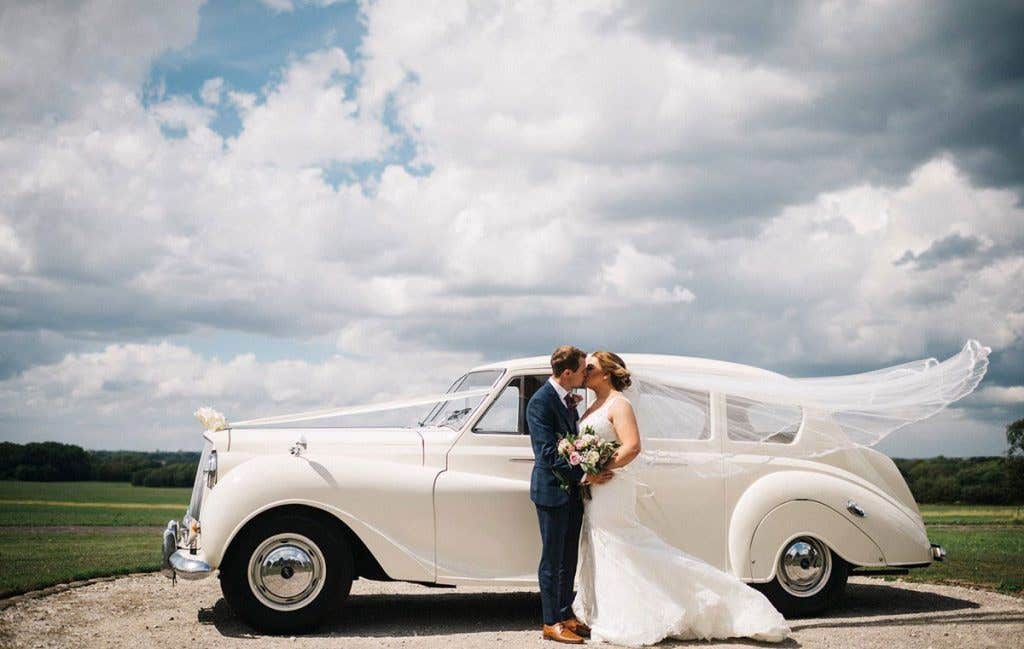 “Tom’s proposal was definitely not the best!” smiles Rebecca. “He’d been out for drinks with friends. When he rang for a lift he suggested we get married the following day! I thought nothing of it but decided to wind him up about it the next morning. He laughed and said, ‘Let’s do it!’ To which I replied, ‘It’s not funny to joke about it. You know I want to get married’. He then got down on one knee and told me he’d been thinking about it for a while and asked me to marry him. I was completely in shock! Unfortunately, my Dad passed away when I was 10, so he rang my grandparents to ask their permission. They were over the moon. We then spent the whole day driving around looking for the perfect ring." 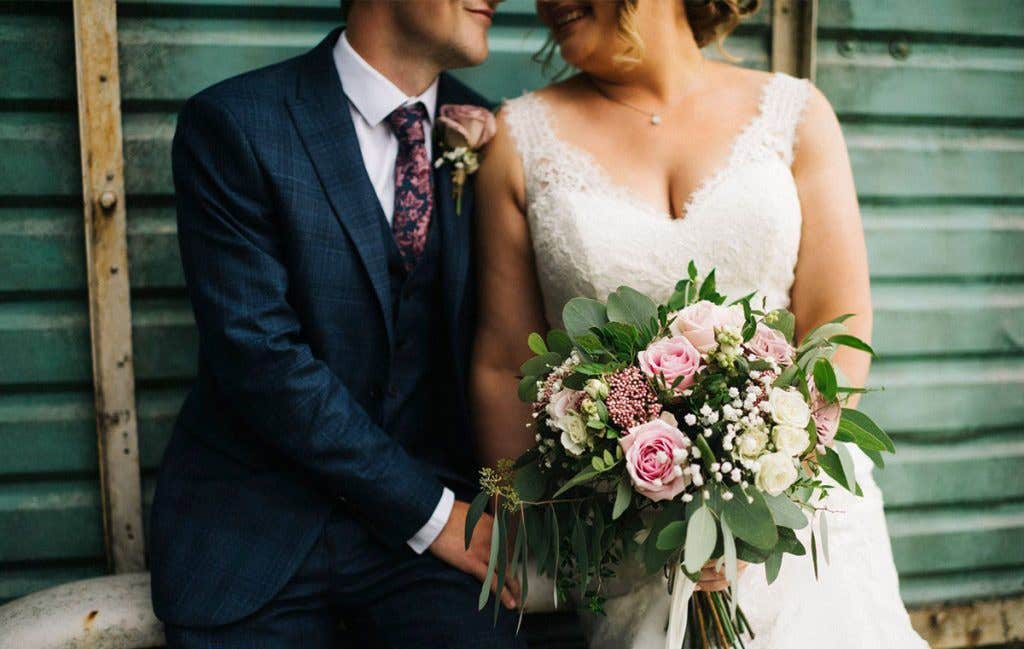 Rebecca originally visited WED2B’s Gateshead store in July 2016, two years before the wedding. “I was insistent on going shopping then,” she says. “I bought a dress and was incredibly happy with it but, as time passed, I lost some weight and kept seeing new styles that I loved. So, I went back to the store again in January 2018 with my brother.” 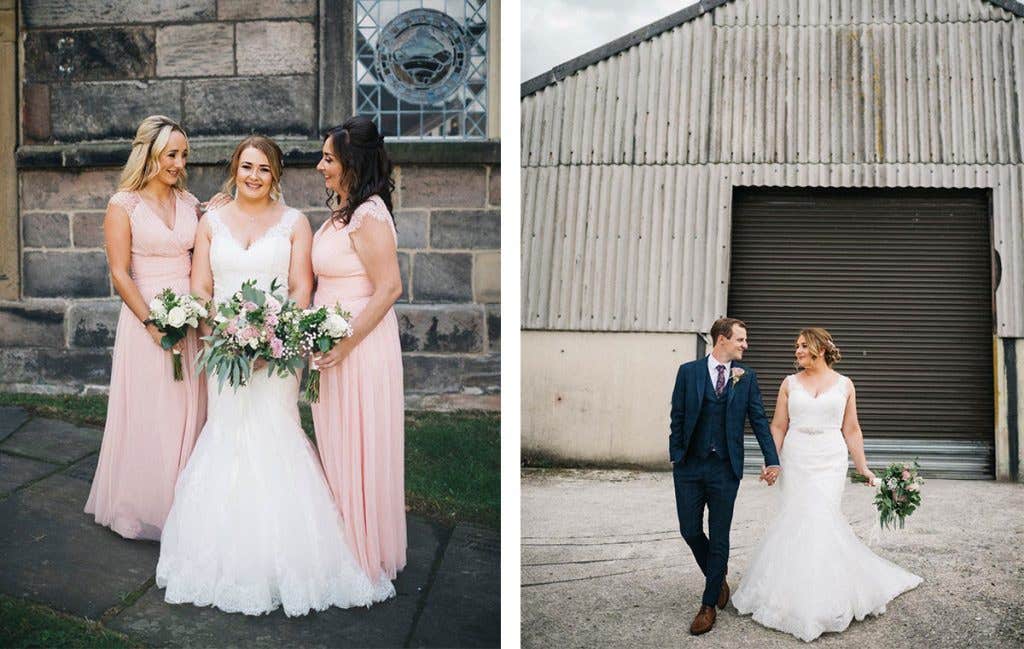 “When we got to the store my brother said, ‘Don’t expect me to get emotional’, but when I walked out wearing Callista by Anna Sorrano he instantly choked up,” says Rebecca. “He said, ‘That’s it, that’s the one’. I knew then that he was right. I felt that feeling that everyone talks about. It was just magical. The straps added an elegant touch that made me feel secure and balanced out my shape perfectly. The scalloped lace hem was just so elegant and it had the right amount of detail without being over the top or too plain. Everything about it was just me.” 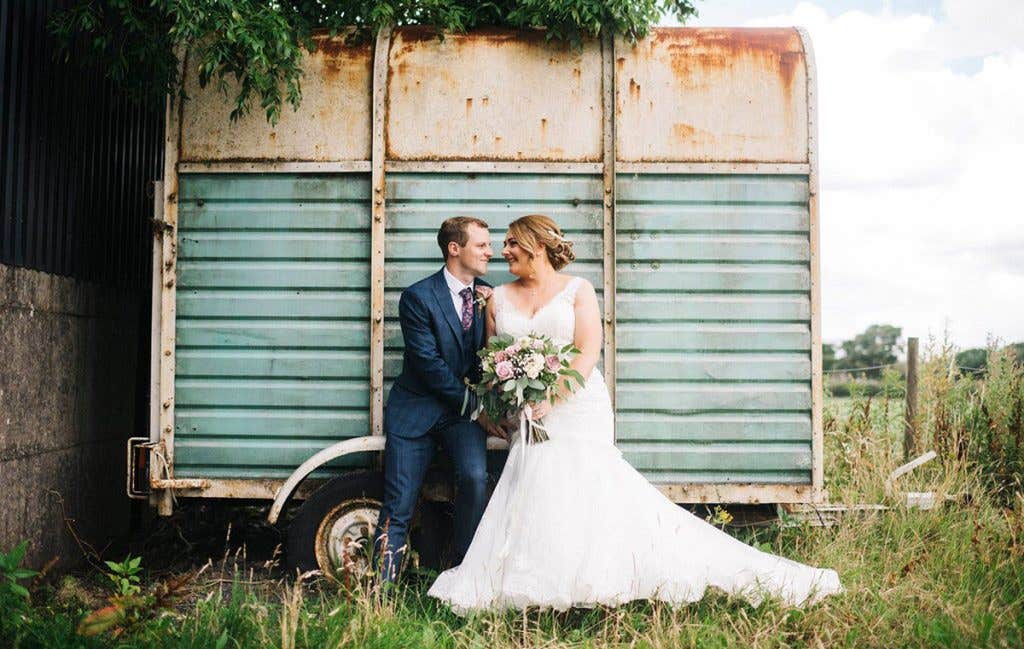 Rebecca also bought her veil, belt and underskirt from WED2B. “The veil and belt complimented my dress perfectly,” she says. “The veil was lace-edged and cathedral length, which looked perfect trailing behind me down the aisle. The girls in the shop also couldn’t have been nicer or more helpful. The whole experience was fantastic from start to finish. I’ve been recommending WED2B to everyone.” 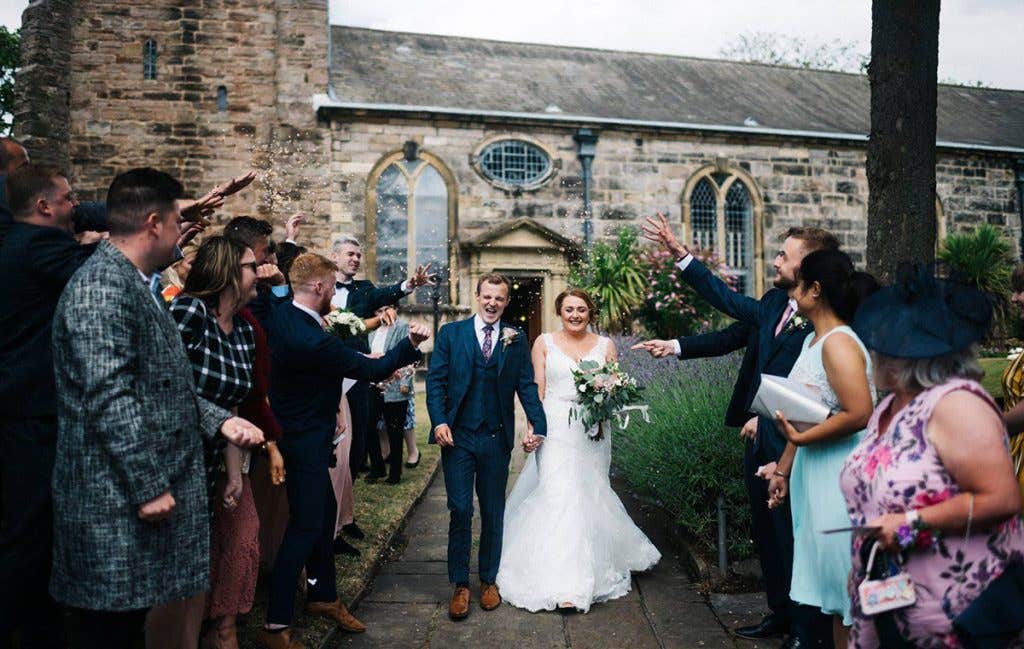 The ceremony was held at St Chad’s Church in Poulton-Le-Fylde. “It’s where we met, Tom was christened and I was confirmed,” says Rebecca. “I’d grown up dreaming that I’d get married there. Tom set me three criteria for the reception venue. He said it couldn’t be a big hotel, it couldn’t be somewhere you’d only have a meal and it couldn’t be somewhere where we’d been to a wedding before. I came across Beeston Manor and knew instantly that it was perfect. It was elegant, romantic and intimate. We visited just after getting engaged and booked it right away. They asked what date we wanted and Tom said, ‘28th July 2018 because the World Cup will have finished and it’s before the Premier League starts again’. I couldn’t help but laugh!” 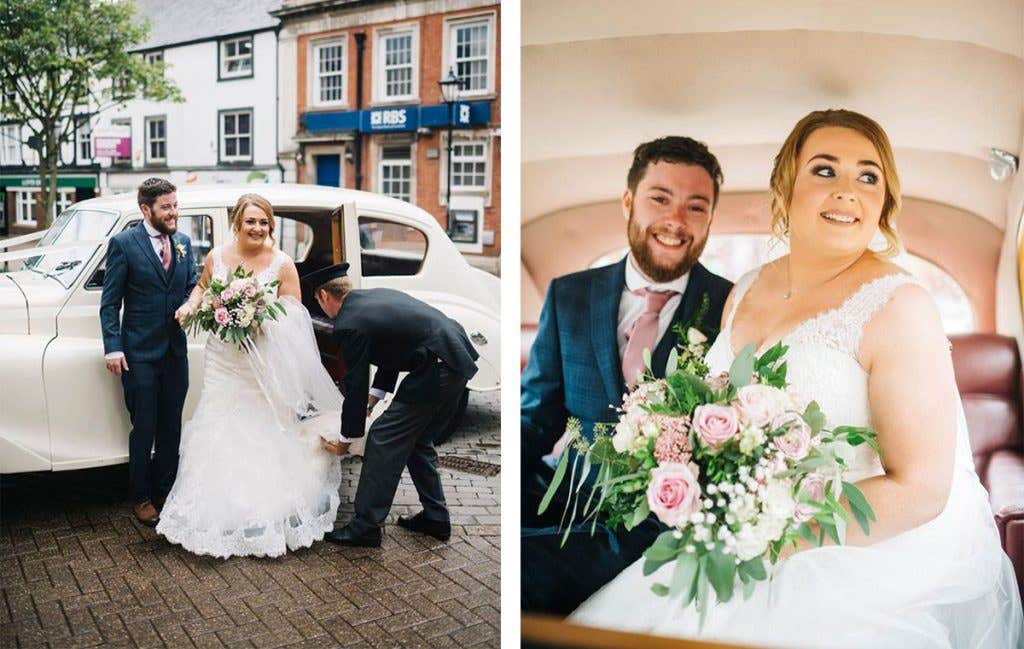 Rebecca’s brother walked her down the aisle. "It was special to have him involved,” she says. “He was so nervous but he did my Dad proud. I walked down the aisle to the traditional Bridal March and back out again to the Wedding March. We had a Bible reading and an extract from Captain Corelli’s Mandolin, both of which focused on how you need to work with and support each other through the good times and the bad. My favourite memory was seeing Tom burst into tears when he saw me walking down the aisle. He turned around and said, ‘Wow!’. I’ve never seen him so emotional. It was something I’ll never forget.” 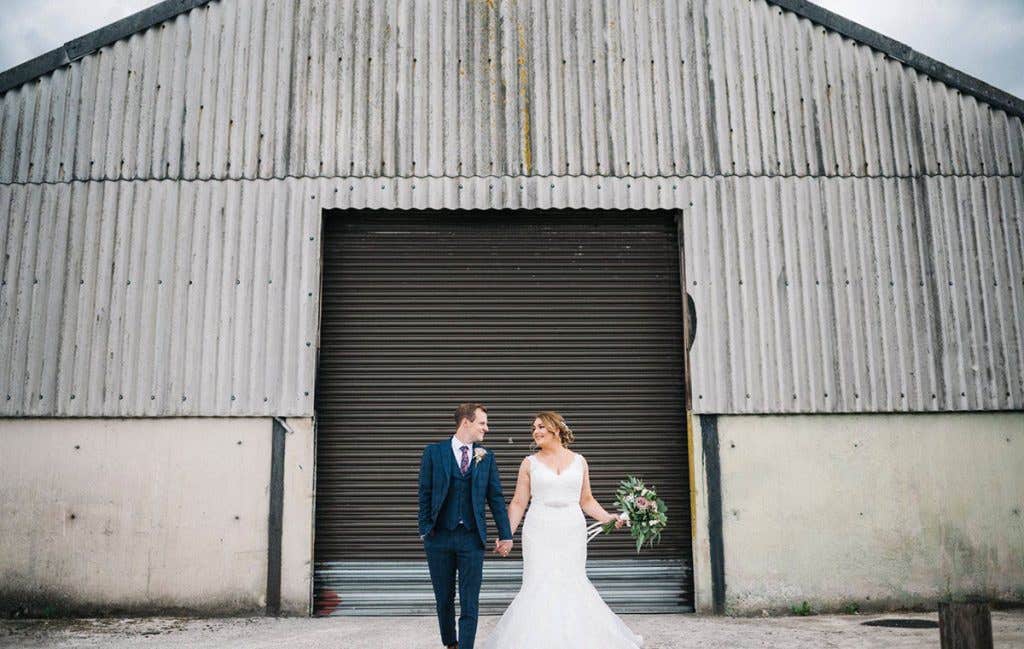 After the ceremony, guests headed to the reception venue for drinks and canapés inside, as it had started to rain. “The canapés were steak and a chip on a stick and mozzarella crostini, both of which were gorgeous,” says Rebecca. “We had photographs while our guests had a drink and then we sat down to eat at about half-past three.” 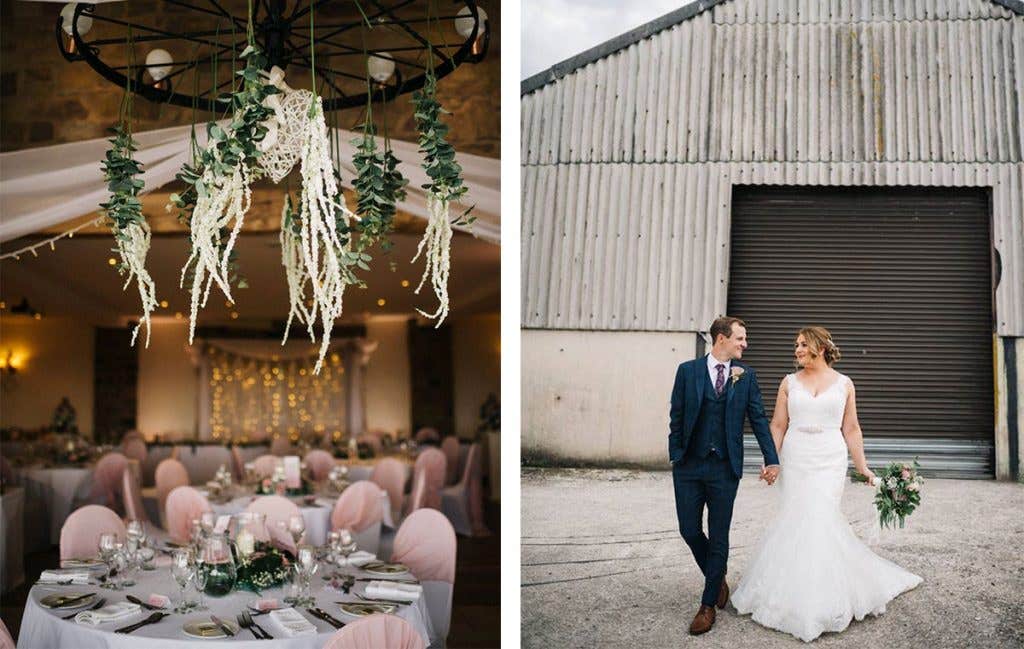 “We didn’t start off with a theme but as the planning progressed we ended up having a ‘classy football’ theme,” says Rebecca. “Tom was really involved and we were keen to include elements from both of our interests. We bought lots of little candles, I made rustic mason jars for the top table and I bought some hanging artificial flowers from The Range. Most of the small bits and pieces were picked up from Home Bargains, such as the scented candles, some of the tea light holders and the crafting materials. We also bought some lawn games, including mini football nets and a foot golf set, for people to play with during the drinks reception. It went down a treat with everyone, despite it being a rainy wedding day.”

“We were announced into the room with the song, ‘Are You Ready for This?’ by the Jock Jams,” says Rebecca. “It really kicked off the party atmosphere. The meal was followed by speeches from Tom, his best man, his Dad and myself before we cut the football-themed cake. Then the evening guests arrived and it was party central after that. The venue staff were great and circulated the evening food around on platters, so we didn’t have to leave the dance floor. We had sausage and bacon sandwiches with chunky chips and it was the perfect accompaniment for all the dancing. Lights out was at half past 12 but no one was ready to leave!” 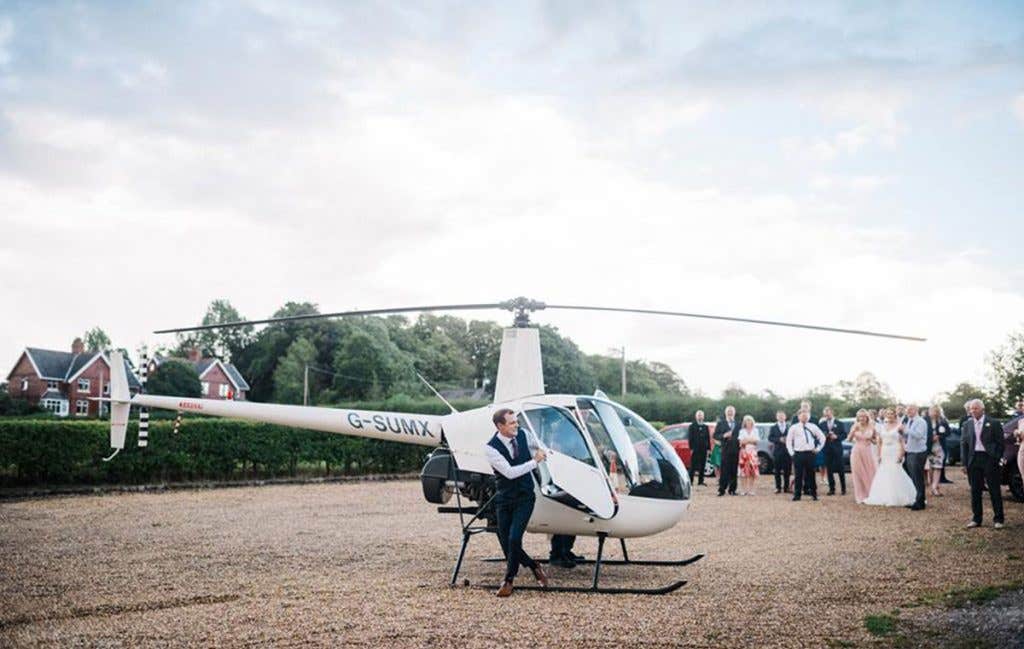 “The best moments were the surprises Tom and I had secretly planned,” says Rebecca. “The venue’s owner has a helicopter, so I’d arranged for Tom to have a surprise helicopter ride after the speeches. As the speeches started though, the heavens opened. I remember looking out the window at our rainy wedding day and seeing the whole sky light up with lightning. I looked at the wedding coordinator and she shook her head. It seemed like the helicopter was off. When the speeches finished, 20 minutes later, I looked down and there was a note in front of me saying, 'The helicopter is a go’. I was thrilled. Tom and I went outside and he was told to get in the pilot seat before he flew around the venue. When he got out he had the most incredible smile on his face.” 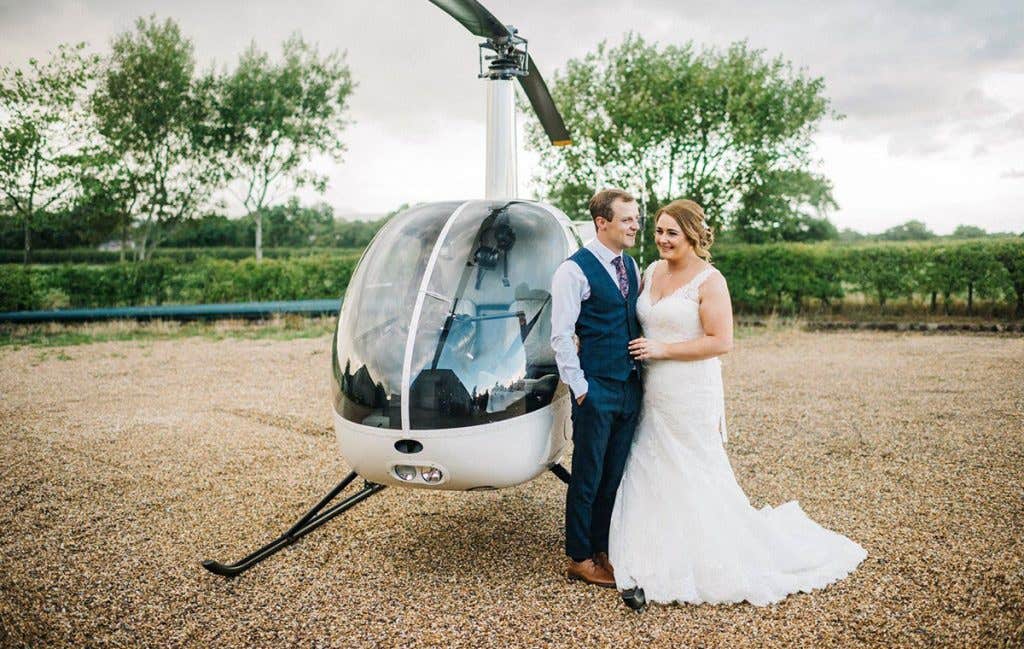 Then the rainy wedding day started again and everyone rushed inside. “Someone was clearly looking down on us kindly just for the half an hour we needed,” says Rebecca. “Tom then had a surprise for me. Our first dance was going to be ‘Free From Desire' by Gala, as it’s our song and we’re not the type to sway to something romantic. So, my face completely dropped when the music started. Tom had arranged for the DJ to play ‘A Million Dreams’ from The Greatest Showman. It’s our favourite musical and guilty pleasure. For those few minutes, it felt like Tom and I were the only ones in the room. Then we invited everyone to join us on the dance floor and I remember looking around and thinking to myself, ‘I’ve never been happier’. It was everything I could have wished for.” 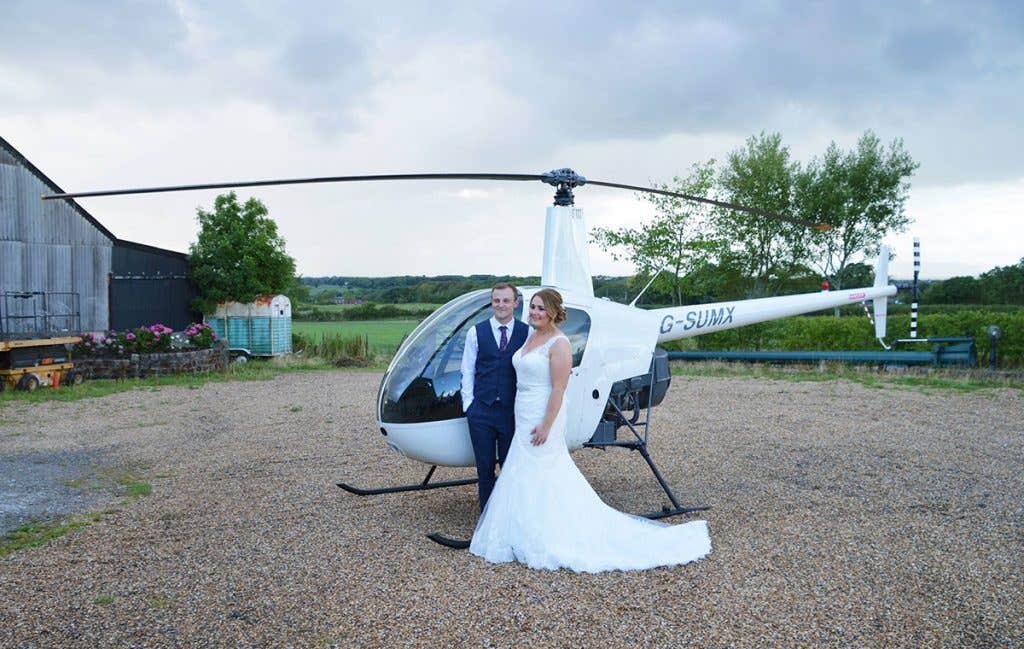 “My top tip is to make sure you book your suppliers well in advance to get who you want,” says Rebecca. “We booked our photographer, Kerry Woods Photography, over two years in advance because she’s so in demand! It was a similar time for our hair and make-up artist too. If we could do the day all over again, I would try to save some money from other areas and hire a videographer. Other than that, there’s nothing I would change, not even the rainy wedding day. It was just perfect. Good luck to all future brides to be!”

Did your wedding have the wow factor like our rainy wedding day feature? If you would like your big day to be one of our real weddings send your favourite photo to info@wed2b.com and we’ll be in touch!