This happy couple followed a small wedding ceremony with a fabulous party for friends and family. Our WED2B Real Weddings feature reveals more: Sue and Rob first met when Sue worked as an estate agent and Rob’s mum was her...

This happy couple followed a small wedding ceremony with a fabulous party for friends and family. Our WED2B Real Weddings feature reveals more:

Sue and Rob first met when Sue worked as an estate agent and Rob’s mum was her manager. “Rob started working at the same place and I trained him,” she says. “At the time I was married to someone else. We worked together for a few years before I left to work in a primary school, but we stayed friends. I was diagnosed with breast cancer in February 2013 and my first marriage broke down. Rob stayed in touch throughout and saw me at my lowest point, while I was going through treatment and losing my hair. Nine months after my treatment ended, Rob asked me on a date. We went for dinner and to the cinema, and the rest is history!” 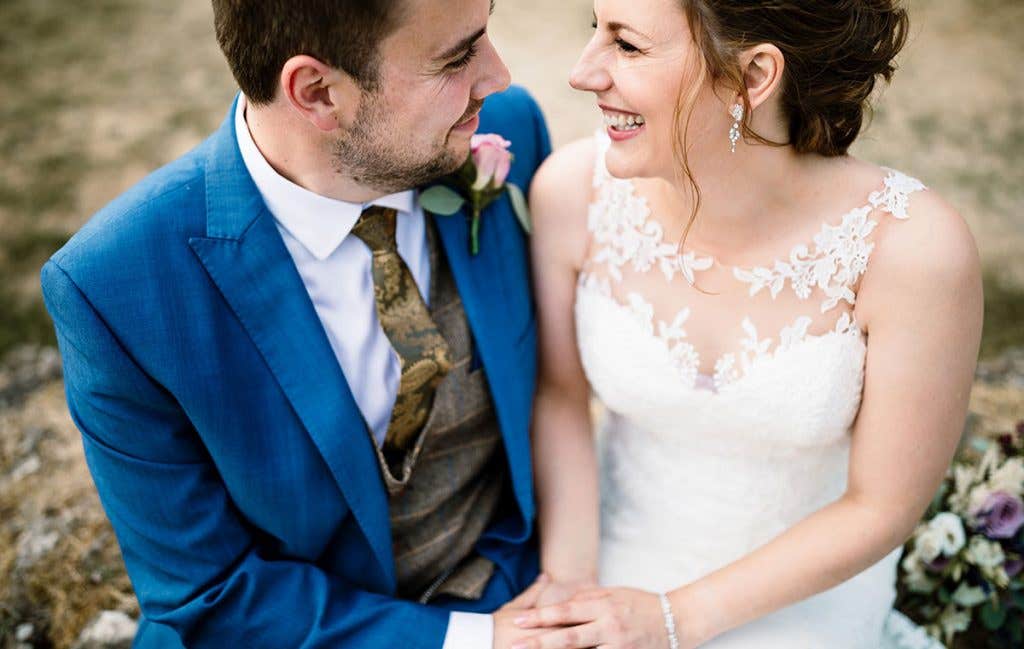 “We’d just arrived home from a weekend camping with friends,” says Sue. “Apparently Rob had been carrying around the ring box in his pocket for the entire weekend, even sleeping with it under his pillow. He was waiting to find the right romantic moment for the proposal, perhaps by the campfire in the evening or on a deserted beach. No time had been right though, as the weather had been pretty rubbish and there were always lots of children around!” 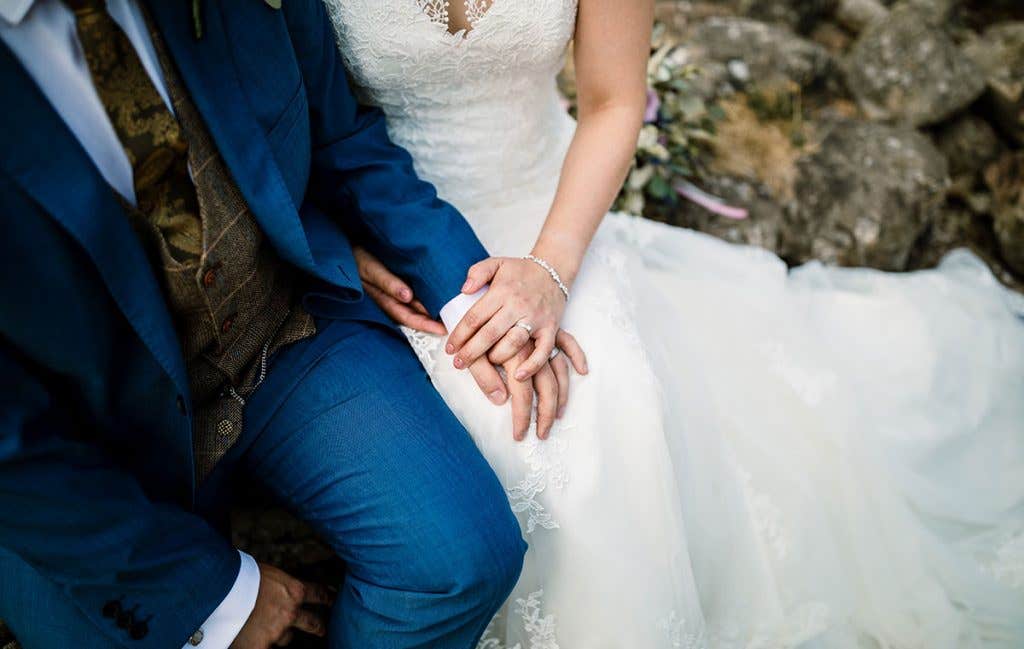 “When we returned home, we unpacked the car and sorted everything out before sitting down with a bag of Haribo to watch a film,” says Sue. “Rob kept passing me Haribo rings out of the bag but none of the other sweets. After a while I said to him, ‘You do know that rings aren’t my favourite?’ He seized the moment, got down on one knee, whipped the ring out of his pocket and said, ‘How about this one?’. It was a complete surprise!” 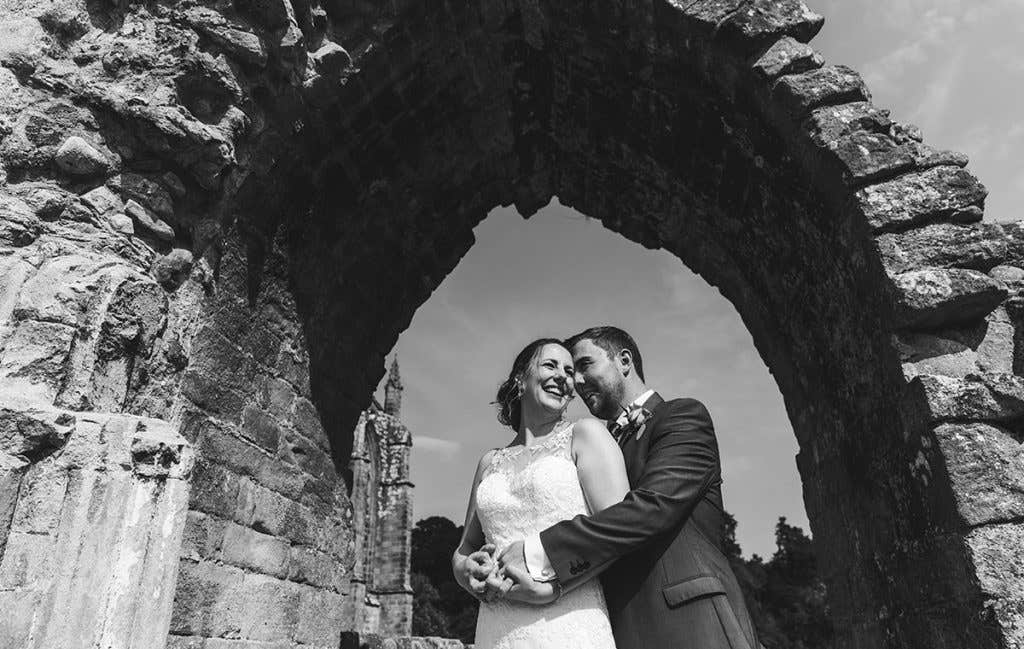 Sue visited WED2B’s Leeds store with her Mum, mother-in-law and daughter, Tegan, in December 2017. "I went because I’d seen a picture of the dress Tegan and loved it,” says Sue. “I thought it was a sign, as my little girl is called Tegan! We’d been talking over Christmas about wedding dresses, and the plan was to go shopping for one after I’d lost some weight. After seeing the picture online the plan changed!” 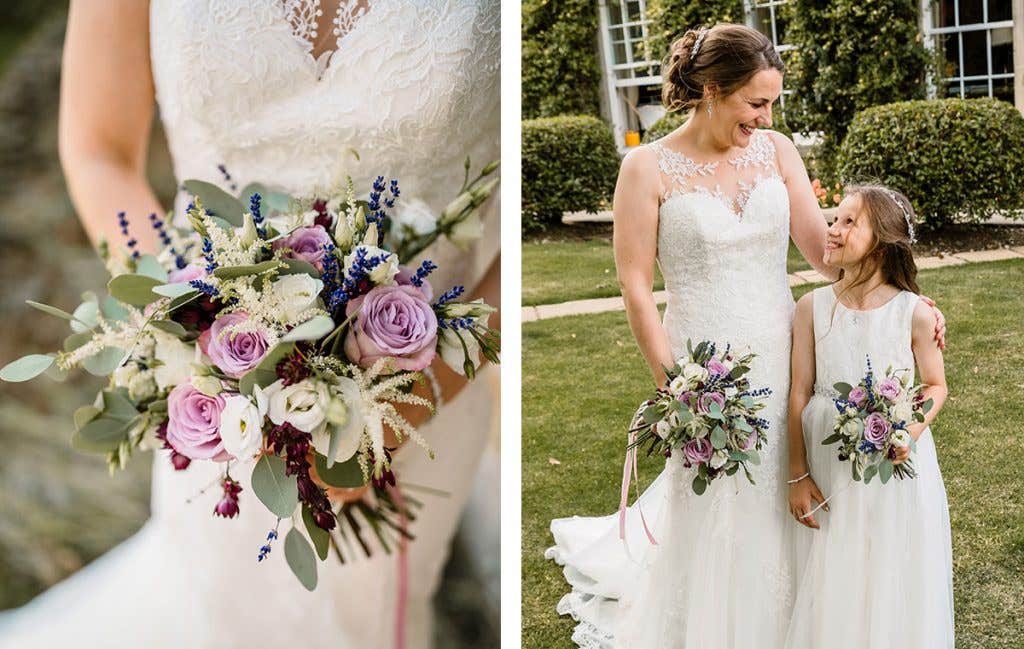 So many to choose from

“I went to the store with the intention of buying Tegan but the ladies in the shop advised me to try on a few other dresses too,” says Sue. “As soon as I put Megan on I knew it was The One! The staff made Tegan and I feel so special too. It was between Christmas and New Year and the store was very quiet. So, Tegan tried on flower girl dresses in the changing room next to me. Then we revealed our dresses together. She was made to feel just as special as me, which was perfect! Tegan chose the Olive flower girl dress and an Autumn headband, and we both got Layla sparkly belts to match.” 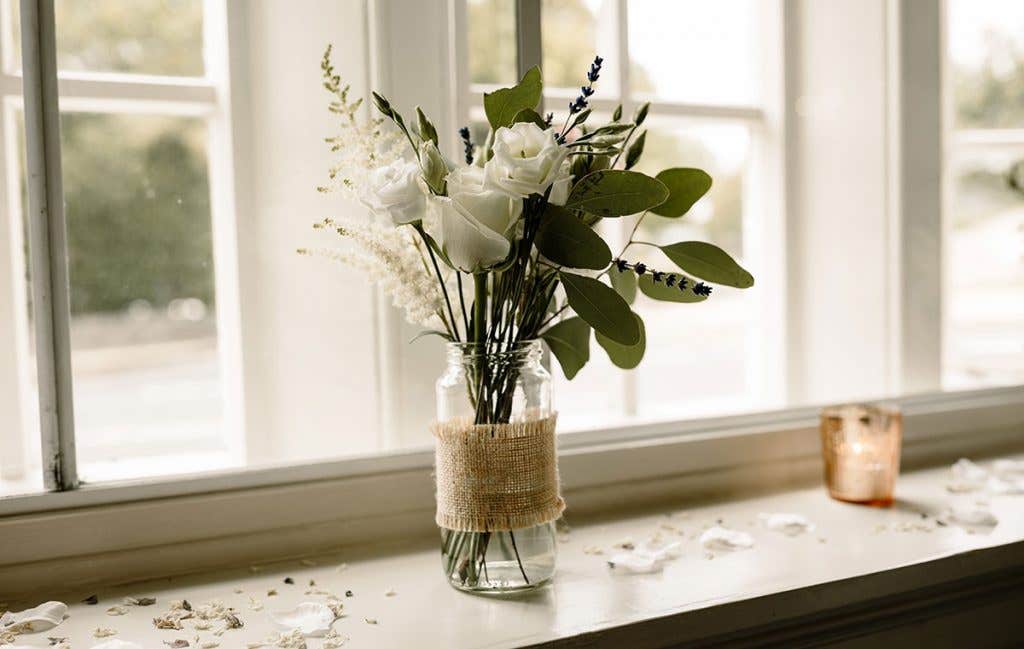 The couple married at The Devonshire Arms, Bolton Abbey on Thursday 26 July 2018. “We fell in love with the venue as soon as we saw it,” says Sue. “We wanted an intimate small wedding and The Devonshire Arms was the perfect venue for this. The setting is idyllic.” 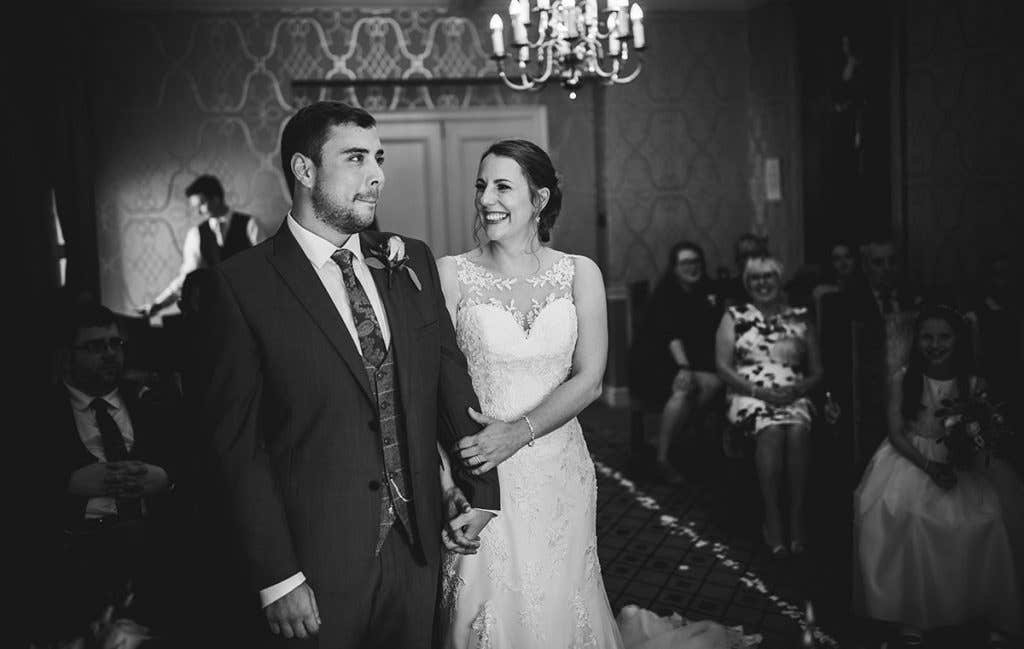 “We had an intimate, small wedding ceremony on the Thursday with just 15 people, including us,” says Sue. “My two children, Tegan and Alfie, walked me down the aisle and gave me away. They both gave short readings too. Tegan read an extract from Winnie the Pooh, and Alfie read a few lines from the film Up! I walked down the aisle to a piano version of 'A Million Dreams’ from The Greatest Showman and we walked out to ‘Only You’ by Alistair Griffin.” 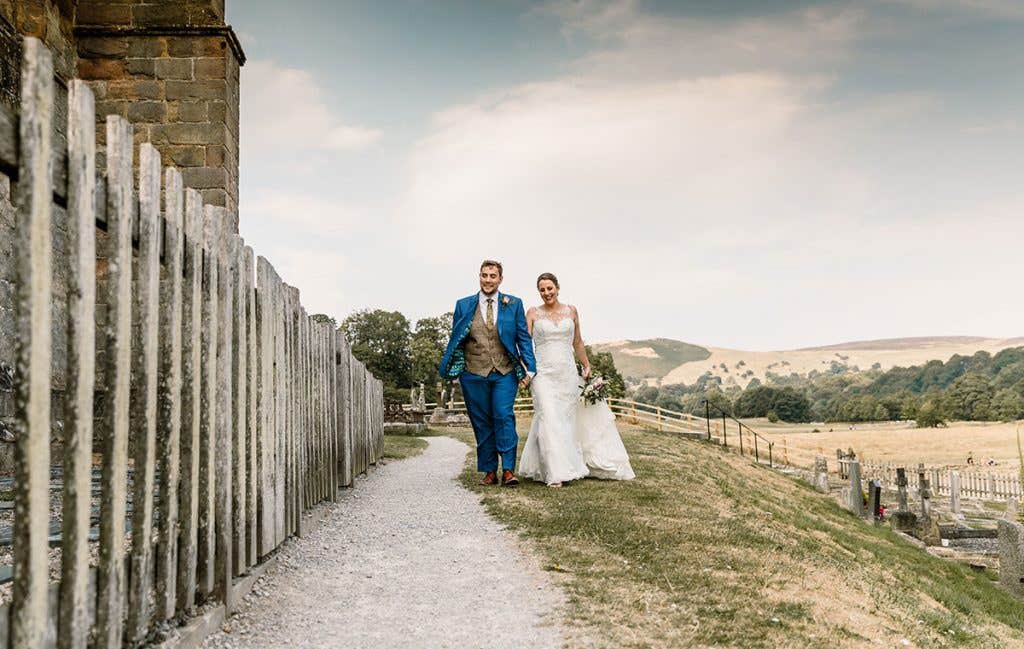 After the small wedding ceremony on the Thursday, there was a drinks reception before an intimate private dinner. “During the drinks reception, Rob and I drove to the ruins at Bolton Abbey, just a couple of minutes away,” says Sue. “We had some beautiful photographs taken and it gave us a while to enjoy a bit of time together. After dinner, we sat in one of the lounges drinking and chatting. We even got changed into more casual clothes, as it had been a really hot day and we wanted to wear something a bit more comfortable. The children were playing outside and after a while they came in to let us know that a sheep had escaped from the field next door. So our wedding evening was spent trying to round up a sheep!” 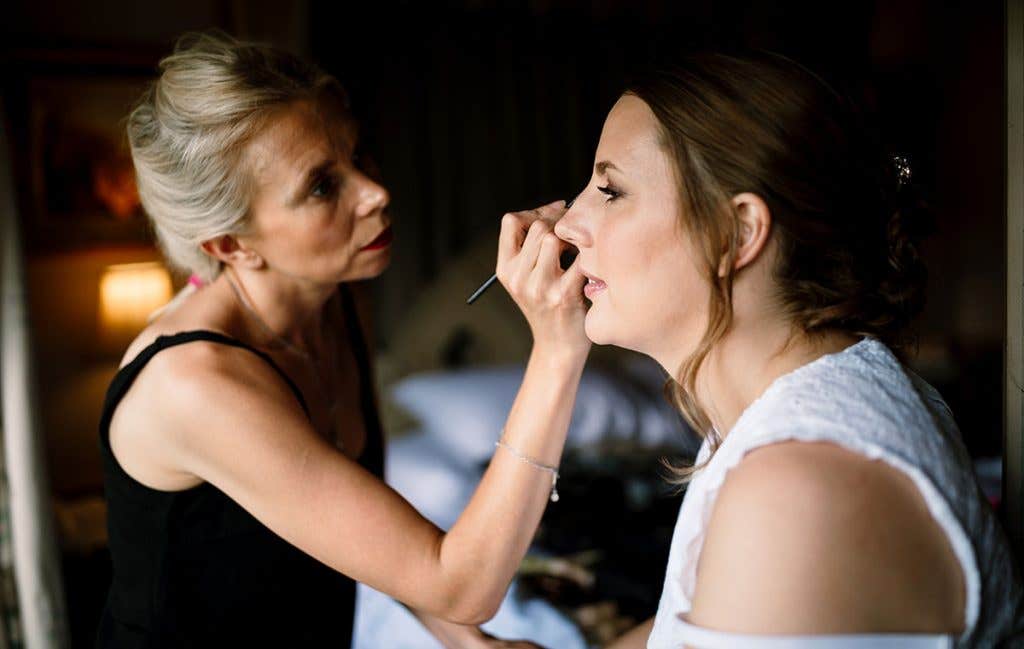 The couple stayed overnight in the hotel, along with their guests. Then the next day was spent relaxing, using the leisure club, sitting in the brasserie or playing the giant garden games they had bought for the children. “In the afternoon, the hairdresser and make-up artist came,” says Sue. “Then on the Friday evening we had a large celebration with all our friends and family. The weather continued to be glorious too.” 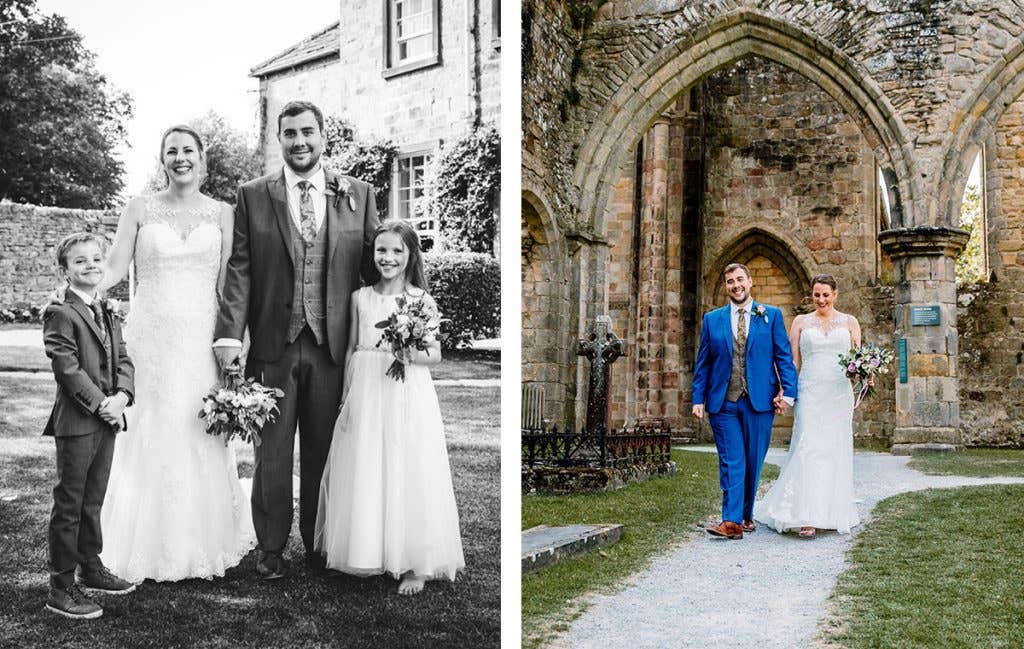 “The venue is beautiful and needed very little in the way of decorations,” says Sue. “ What we did have, we largely made ourselves. There were flowers in decorated jars dotted around the room. We also had wooden place names for each guest and bunting, which had been made by a friend. There were also lots of candles, copper lanterns and fairy lights. The table decorations were placed on log discs and the cake stand was also a larger log. We displayed a beautiful canvas painting made by Tegan and Alfie and, instead of gifts, we asked for donations to Cancer Research.” 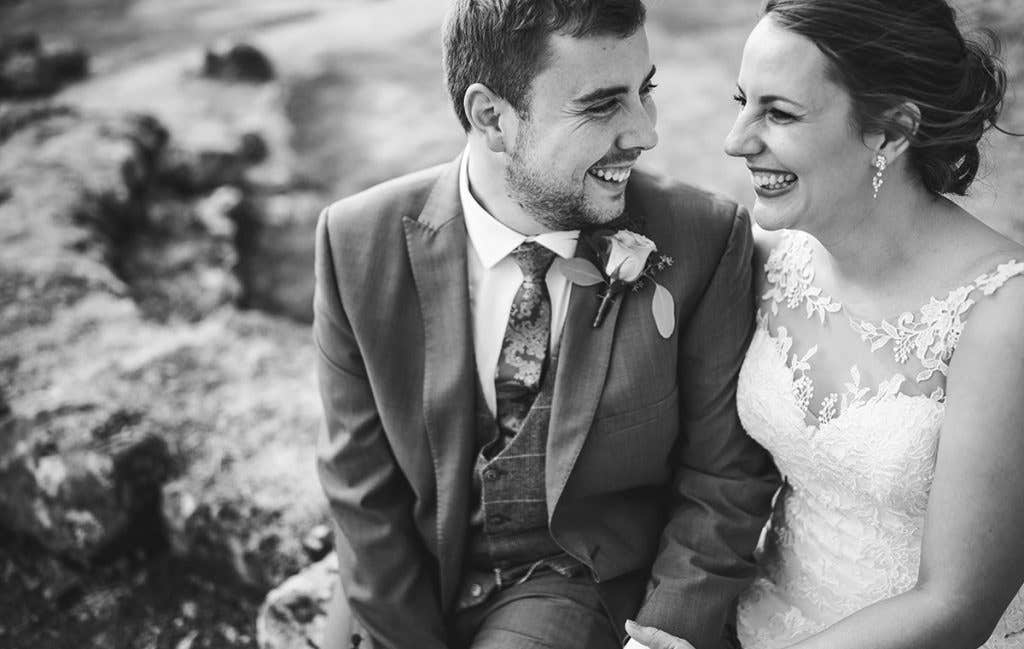 After the ceremony there was a BBQ followed by ice cream served from a traditional ice cream cart. “Everyone really appreciated the ice cream in the hot weather!” says Sue. “Then there were speeches and a live band, who were fantastic. During his best man’s speech, Rob’s brother broke the news to him that he had a speeding ticket, which had arrived in the post a couple of days before. Rob’s brother also had to delay the speeches slightly too. A bird did a poo on him and he had to go and get changed!” 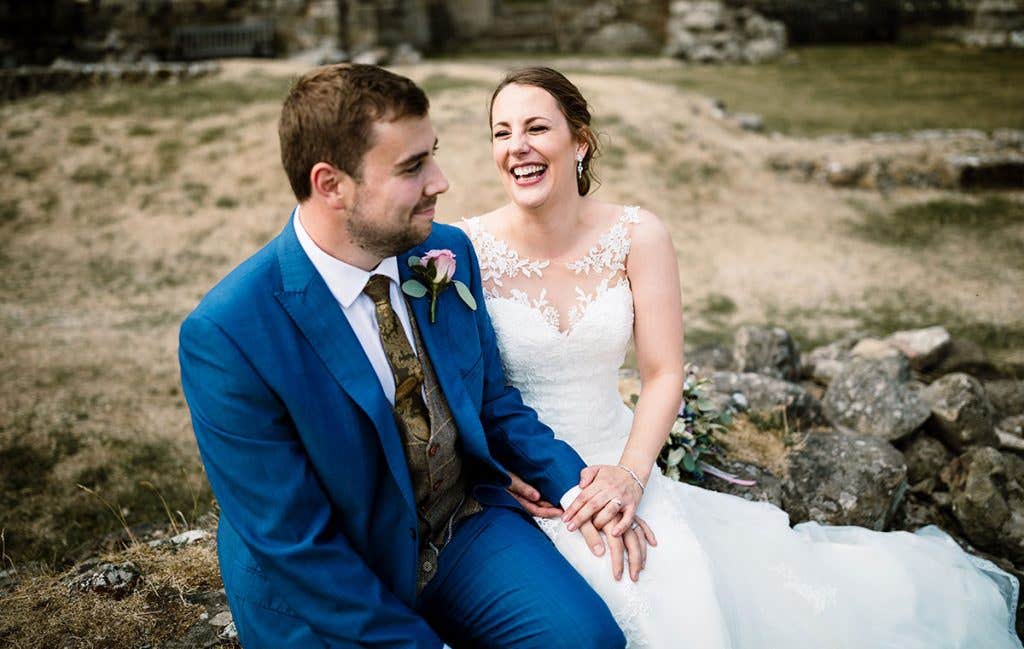 “The only thing we would do differently is getting the band to play outside for the first set and then inside for the second,” says Sue. “As it was such glorious weather, and we were having a BBQ, many of the guests were outside during the first set. The dance floor did fill up later on, but it was extremely warm inside and I think a few guests stayed outside as the heat got too much. Luckily, a big rain shower at the end of the night cooled everyone down. It was absolute perfection!” 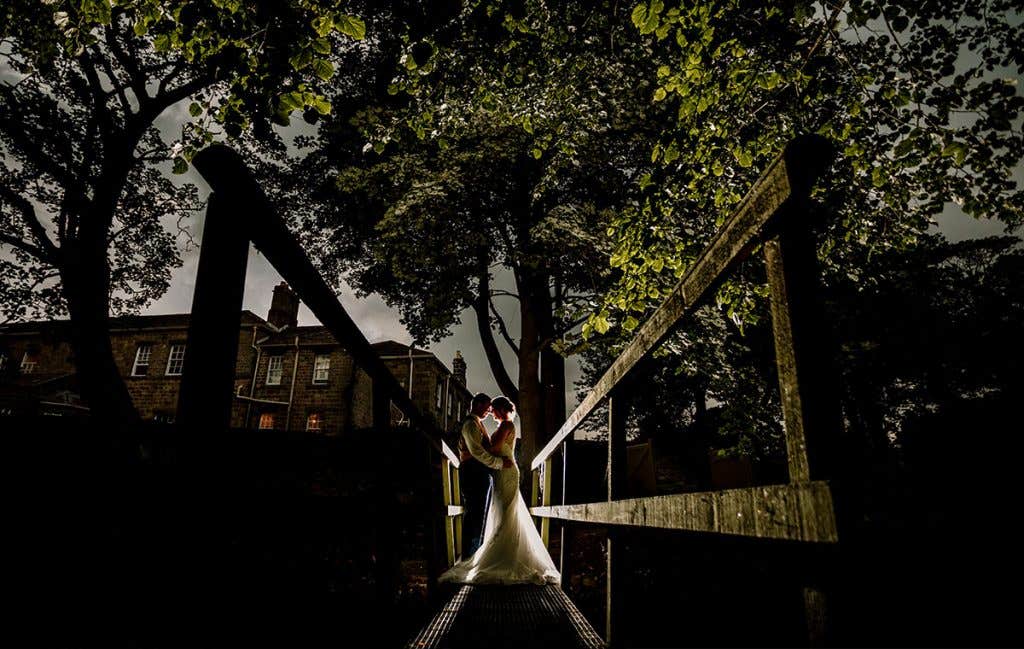 Did your wedding also have the wow factor like our small wedding feature? If you would like your big day to be one of our real weddings send your favourite photo to info@wed2b.com and we’ll be in touch!