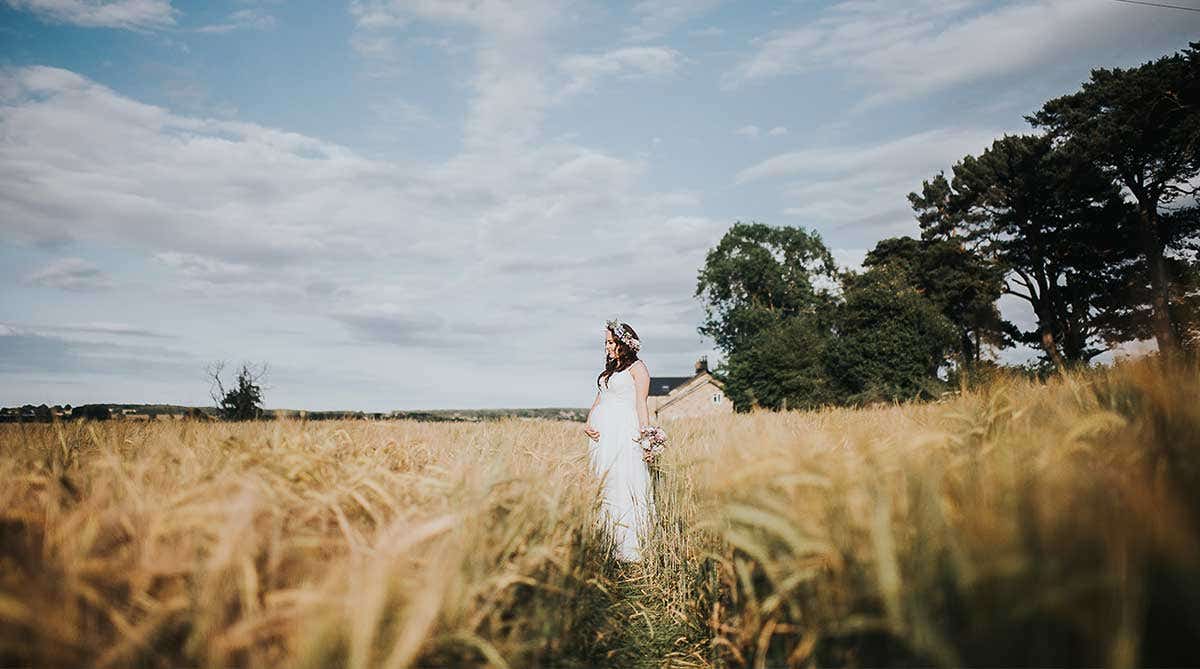 An outdoor wedding in a rustic barn was a day of mixed emotions for these newlyweds. Our WED2B Real Weddings feature reveals more:

Victoria and Stuart first met in a pub in Yarm, Teesside, after chatting on a dating site. “We met a few times after this and then we had a proper first date, which was a weekend away in Edinburgh,” says Victoria.

The couple moved to Scotland after less than a year together. “We moved to Fife on the East coast of Scotland,” says Victoria. “Stuart proposed during a day out in a small coastal town called Crail. We went for a walk on the beach and he just said how much he loved me and asked me to marry him. Then he presented me with the most beautiful engagement ring!” 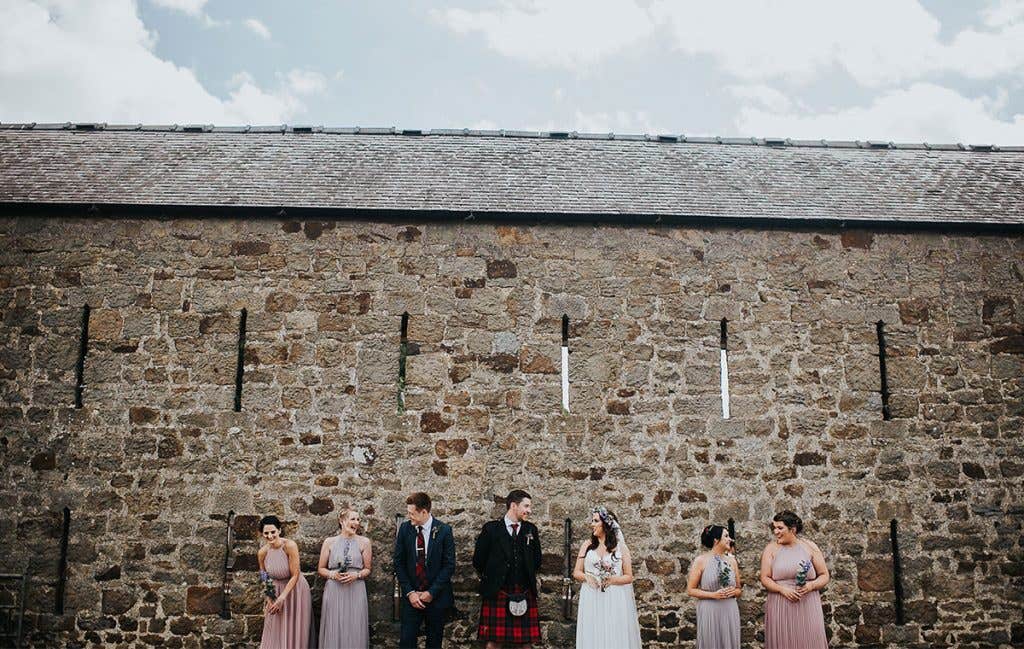 “I first visited WED2B’s Middlesbrough store in 2018,” says Victoria. “I went with my maid of honour and my dresser was a girl I went to school with, so the experience was wonderful. Then I fell pregnant in January 2019, after some fertility problems. So I headed back to WED2B with my sister-in-law, picked three dresses and ended up with Blair, the first one I tried on. Wow, what a dress it was! I was six-months pregnant on my wedding day and it complemented my bump perfectly. I felt so confident.” 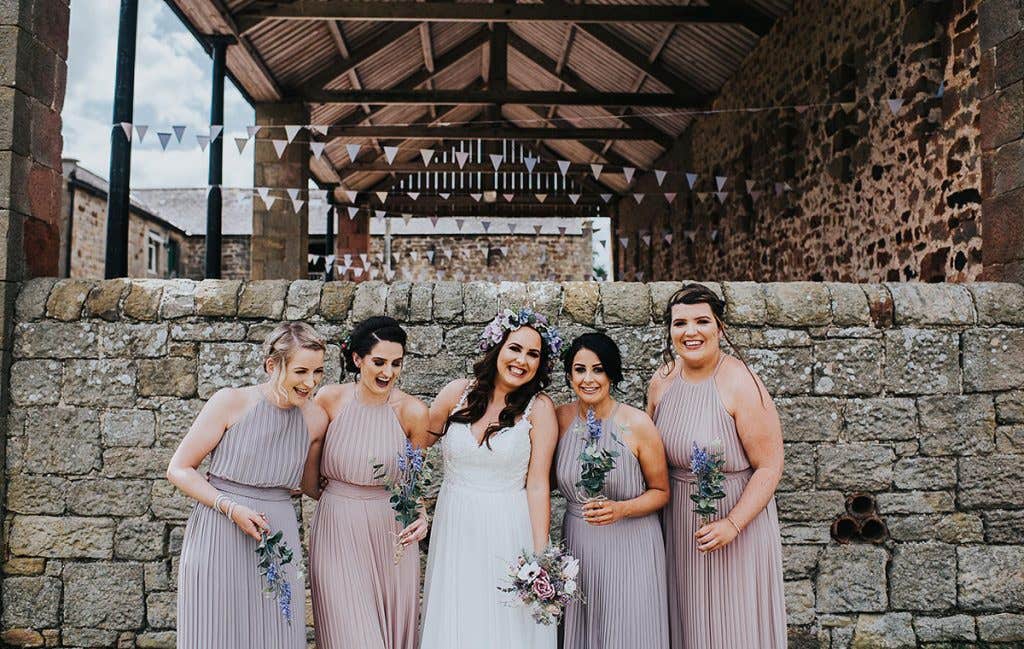 The couple chose the barn at High House Farm Brewery in Northumberland for their ceremony. “I’d been searching for outdoor wedding venues in England, which is difficult as you need to be married under a licensed structure,” says Victoria. “I only viewed this one venue but I knew straight away it was where I would marry my best friend. We were married on the 6th July 2019 and it was the most magical day.” 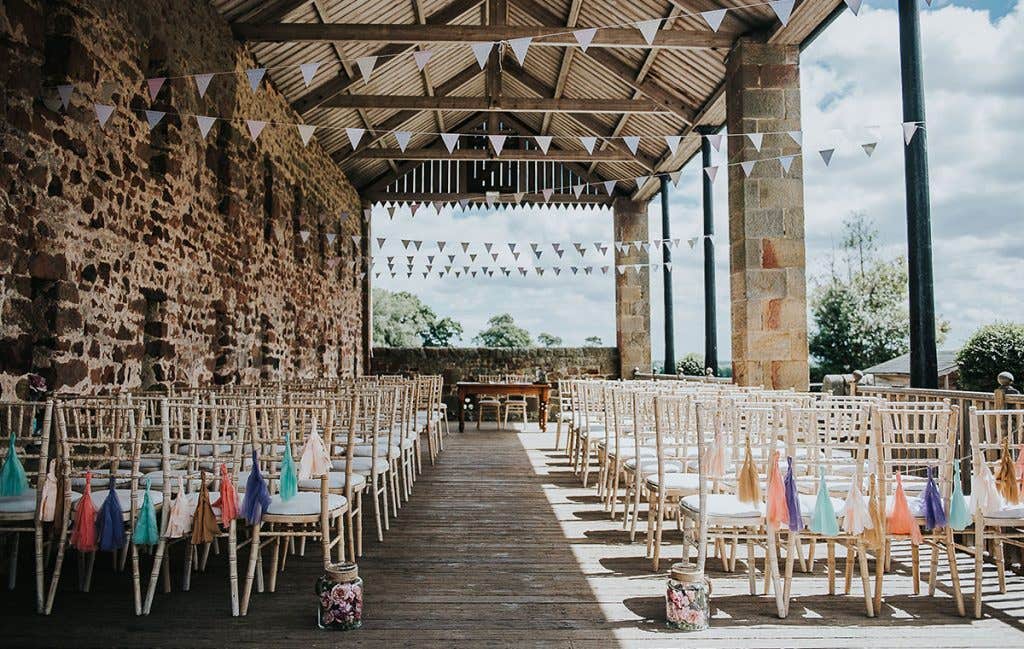 A day of mixed emotions

“My wedding day was slightly bittersweet, as I’d lost my Mum in February, after a very short battle with cancer,” says Victoria. “I’d always pictured my Mum being with me on my big day but unfortunately it wasn’t to be. My morning started with my bridesmaids in Close House Hotel in Newcastle. Obviously, being pregnant, I wasn’t able to have any Champagne but we all sipped our non-alcoholic bubbly while we had our hair and makeup done. My brother then drove us to the venue and I remember feeling the baby kick and my heart was racing. I think he knew I was nervous!” 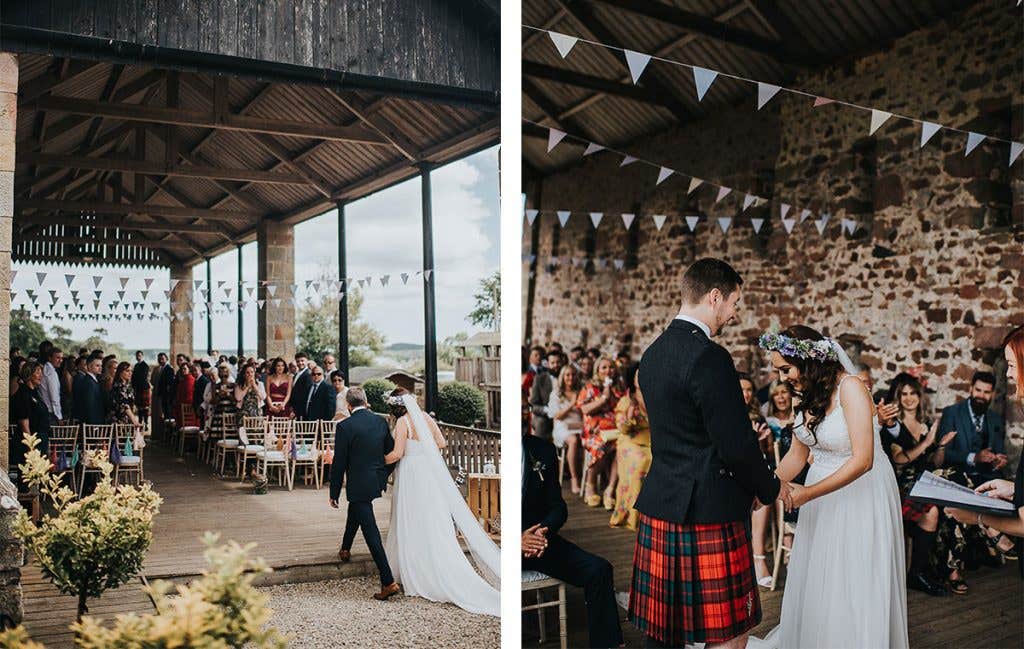 “We met with the registrar when we arrived and then it was time to walk down the aisle,” says Victoria. “My bridesmaids walked down first to a Scottish-themed song. I arrived at the top of the aisle clutching onto my Dad’s arm. I’d dreamed about him giving me away since I was little. I took one look at my future husband, in his kilt, and I felt a wave of happiness flood over me. All I could hear as I walked down the aisle was ‘Ooh’ and ‘Ahh’ and a few people crying. We’d had a difficult year as a family, so I think on this day of celebration it really hit home that Mum wasn’t there with us. We exchanged our vows then Stuart kissed his bride and that was it. I was Mrs Dunbar! I felt on top of the world.” 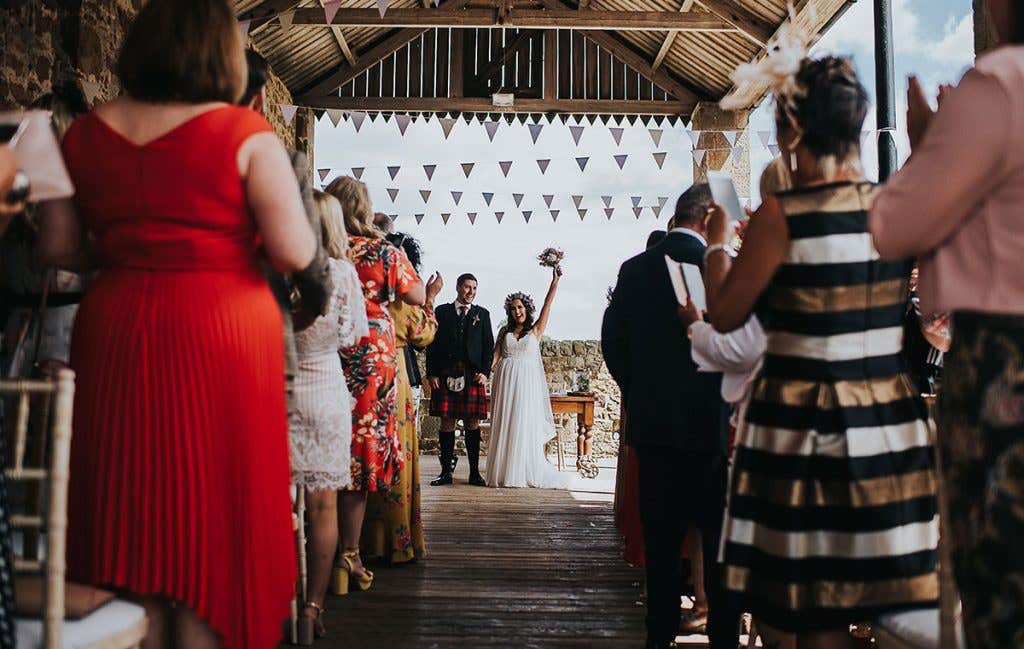 Afterwards, the newlyweds met their guests in the courtyard to enjoy ice-cold Buck’s Fizz and orange juice. “From there we had speeches by my husband, my Dad, me, my maid of honour and the best man,” says Victoria. “We laughed and we cried. It was beautiful. Then the hog roast was served and we all dined like kings. Later there was tea, coffee and cakes and everyone had time to mingle and catch up.”

“My theme was DIY,” says Victoria. “The barn was beautiful as it was and I didn’t want to take anything away from it, so we kept it minimal. There were hessian runners and gin bottles filled with artificial flowers in blush pinks and purples. We also had bunting, tea lights and tassel garlands. Our wedding cake was a three-tier, naked cake with vanilla icing and artificial flowers trailing down it. There was also a cake topper saying, ‘Tale as old as time' from Beauty and the Beast."

“Later it was time to cut the cake and have our first dance,” says Victoria. “It was a slow dance, just my husband and I and our baby bump. We danced to ‘Turning Pages’ from the film Twilight. It’s a very emotional song for me but I managed to hold it together. The band then introduced us as Mr and Mrs Dunbar and then they began to wow everybody. Lots of dancing and fun was had until the night came to an end. It was magical.” 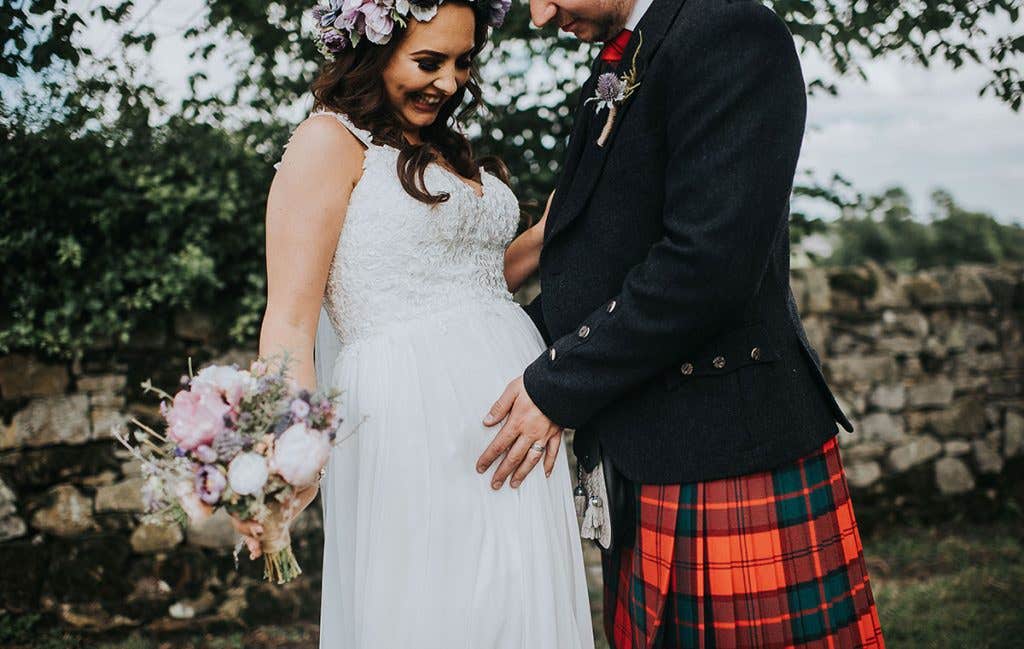 “My highlight was simply marrying the man who’d been my absolute rock for the last four years,” says Victoria. “His support through losing my Mum is something I’ll never ever forget. He really is my Prince Charming.”

“Enjoy every moment,” says Victoria. “Don’t be nervous when you’re walking down the aisle, just look at your future husband. It’s an amazing feeling getting that eye contact. Embrace it all too, because it’s over so fast. And make your wedding your own, put your personality into it. People really do notice the little details.” 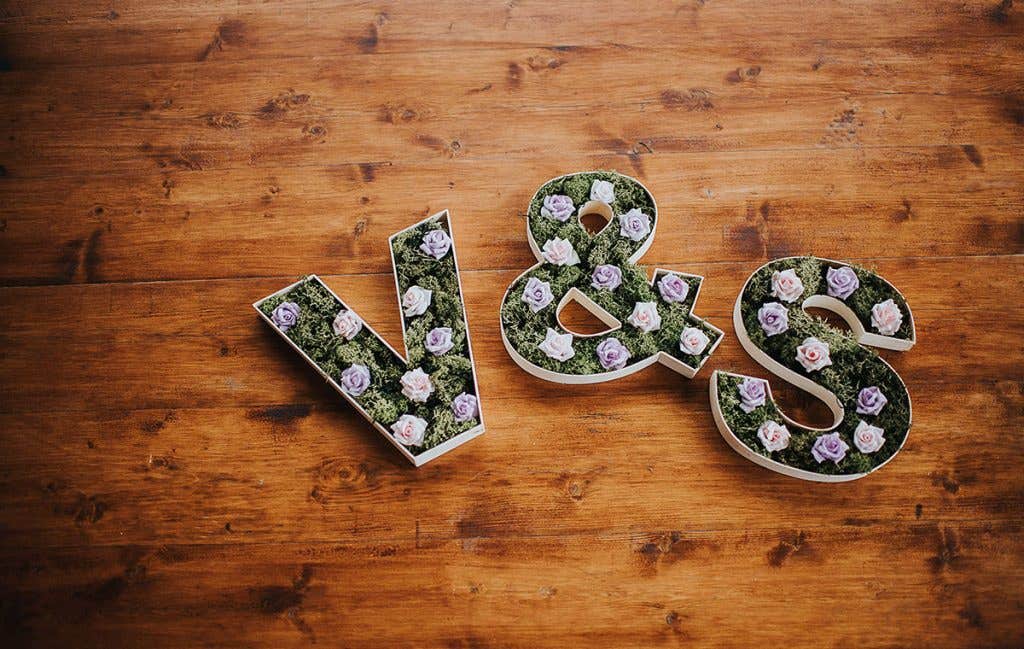 Photographers: From The Smiths (fromthesmithsphotography.co.uk)