Lucy and Dave met at work and were friends for 18 months before Dave asked Lucy on their first date. “He was driving home from a weekend away and left me a really cute answerphone message asking me out for drinks,” says Lucy. “We went for cocktails and we both felt excited but nervous to take our friendship to the next level.”

“We had been together for five years and everyone kept asking us when the engagement was coming!” says Lucy. “Despite that, it was still such a surprise when Dave proposed on Dunster Beach (my all time favourite place) in July 2020.”

After waiting for all the dog walkers to pass, he got down on one knee and asked me to marry him. It was so special and unexpected after everything we had been through with Covid in the months before. I burst into tears, and felt so happy. Dave also had a tear but blamed the wind blowing sand in his eyes!”

“I heard about WED2B online and booked an appointment at my local store (Bristol) as soon as shops re-opened after the lockdown, having been browsing constantly for months,” says Lucy. “It was interesting trying on wedding dresses with a mask on but still so special. I was lucky enough to bring my whole entourage with me. It was such a fun experience, and the shop assistants were so friendly and helpful.”

Lucy chose WED2B’s Kaur dress. “It was relatively new instore at the time,” says Lucy. “I selected four other dresses to try that I had seen online, all of which had a V-neckline. When I tried them on I was uncomfortable and felt exposed, so the assistant recommended I try Kaur instead.”

"As soon as I put it on, I knew it was ‘The One’! It was very comfortable but still beautiful and so detailed. It made me feel so pretty, it was just what I wanted for my wedding day! I also purchased the Matilda headband online, which is absolutely stunning.”

The couple chose The Moonraker hotel in Trowle, Bradford-on-Avon for their big day. “It’s such a beautiful venue,” says Lucy. “We had been to a wedding there previously and we knew we loved it from then. As soon as we could, we booked a meeting and went from there. It was only the second venue we viewed. We got married on 26 November 2021. We always wanted a wintery wedding theme and it was great, only a little rain shower or two!”

“I stayed at the hotel the night before with my mum, dad, sisters, niece and best friend,” says Lucy. “We had an eventful night, as the fire alarm went off at 2am and we weren’t let back into our rooms for an hour (two fire engines turned up!). But all was well in the end and we all got back to sleep…eventually.”

“In the morning we were up bright and early and the other two bridesmaids joined us for hair and makeup with Harriet, who was so friendly and calming and she had such great advice (we were one bridesmaid short as Millie lives in Australia and she wasn’t allowed to fly home in time). It was all a bit of a blur and I just remember all of a sudden being outside the ceremony room ready to go in, with so many emotions!”

“We had two readings by our best friends, including the lyrics from the Beatles song ‘When I’m 64’, which Natalie did well not to sing!” says Lucy.

“The most special part was being able to have all our friends and family there with us to celebrate the day we had always dreamed of. It was overwhelming and perfect. There was humour and fun in the ceremony, which was so memorable and took away some of the nerves for both of us.”

“Straight after the ceremony we were ushered outside by the photographer, as there was a rainbow,” says Lucy. “Then we had a well deserved drink and chatted to all the guests before more photos. We also had a magician for this part of the day and he was incredible. We would recommend him again and again! Everyone loved him and he provided such great entertainment.”

“Our first dance song was ‘Always’ by James Arthur,” says Lucy. “The lyrics meant a lot to us and we both like him as an artist. We struggled a lot with this decision!”

“Our colours were blue/green with a wintery wedding theme,” says Lucy. “We had a lot of wood and eucalyptus decorations, lots of which were made my friends and family. We also had blue and green confetti hearts in line with the theme. Our flowers were from Moonraker & Rose and the were perfect, simple but beautiful with lovely blues and whites with greenery, just what I wanted.”

“I also managed to sneak in some Harry Potter decorations as the table numbers for the meal, using chapter pages on one side. The other side had to be Oasis lyrics for the groom!”

“We served a three-course meal, roast dinner, of course,” says Lucy. “Then on to a disco in the evening with a break for sparklers and fish and chips later on. Our cake was made by a local baker, a friend of a friend, and it was amazing. It was her first wedding cake and she did not disappoint. We had three tiers of caramel, white chocolate and lemon.”

“One of the most memorable moments was seeing each other for the first time on the day and forgetting about all the stress of planning and just enjoying the moment,” says Lucy.

“It was also so special to have all our family and friends with us to celebrate and having everyone we love together. We also really enjoyed the speeches, which were amazing, and the magician. It’s one of the main things people talk about still!”

“Start planning early and don’t stress about the little things,” says Lucy. “Try to budget where you can, as the expensive details won’t get seen. Guests care most about food and dancing!! Try to enjoy the day, it really does go so quickly and you don’t want to miss any of it.”

Venue and catering: The Moonraker Hotel 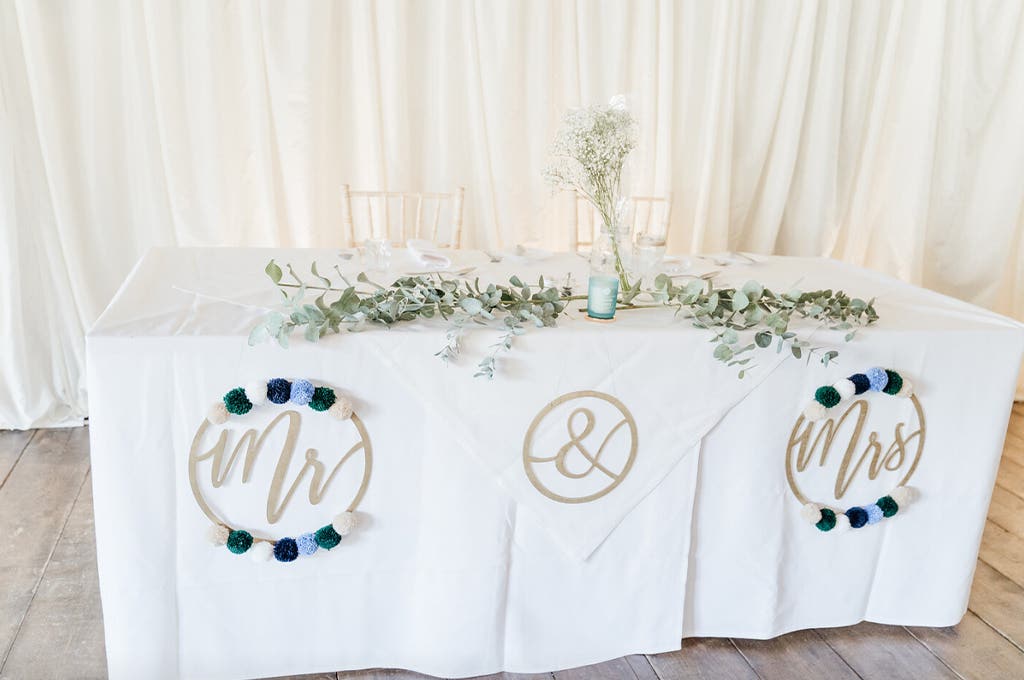 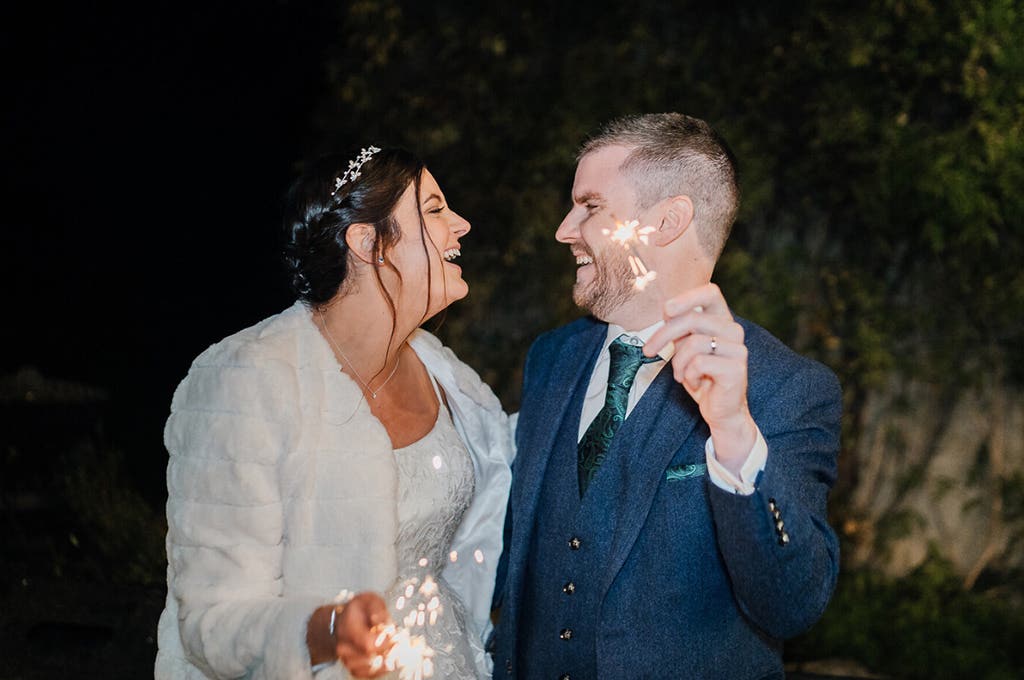 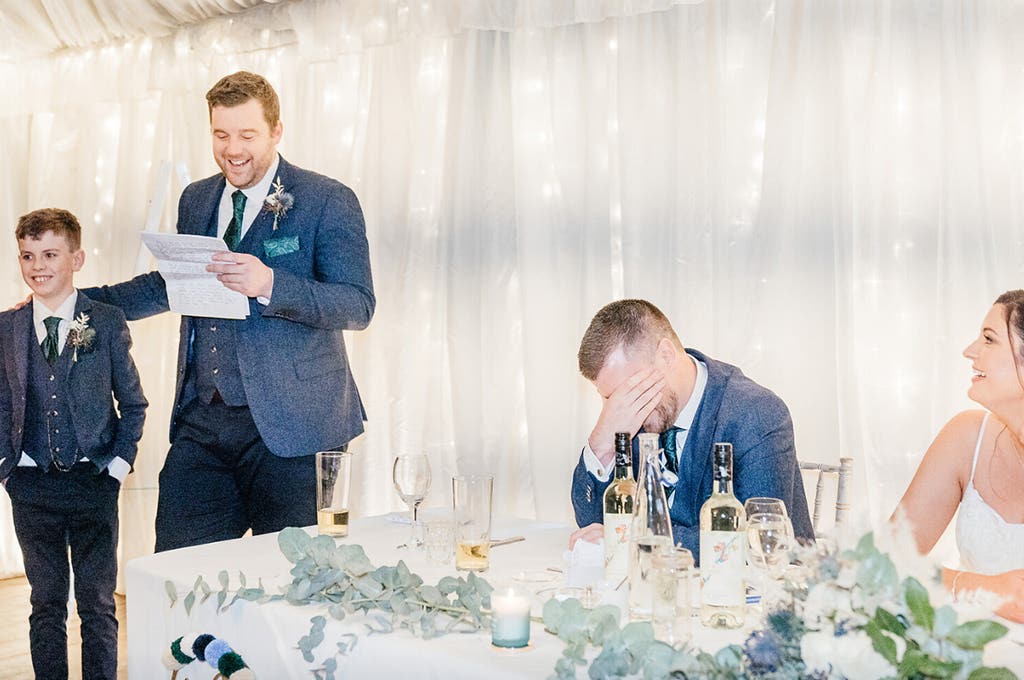 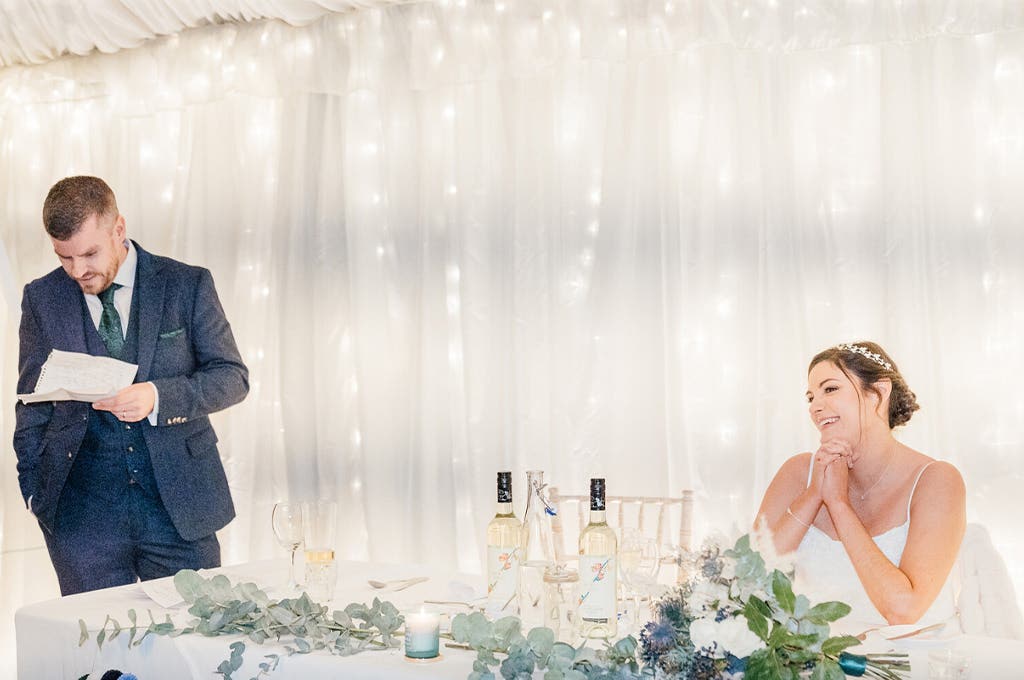 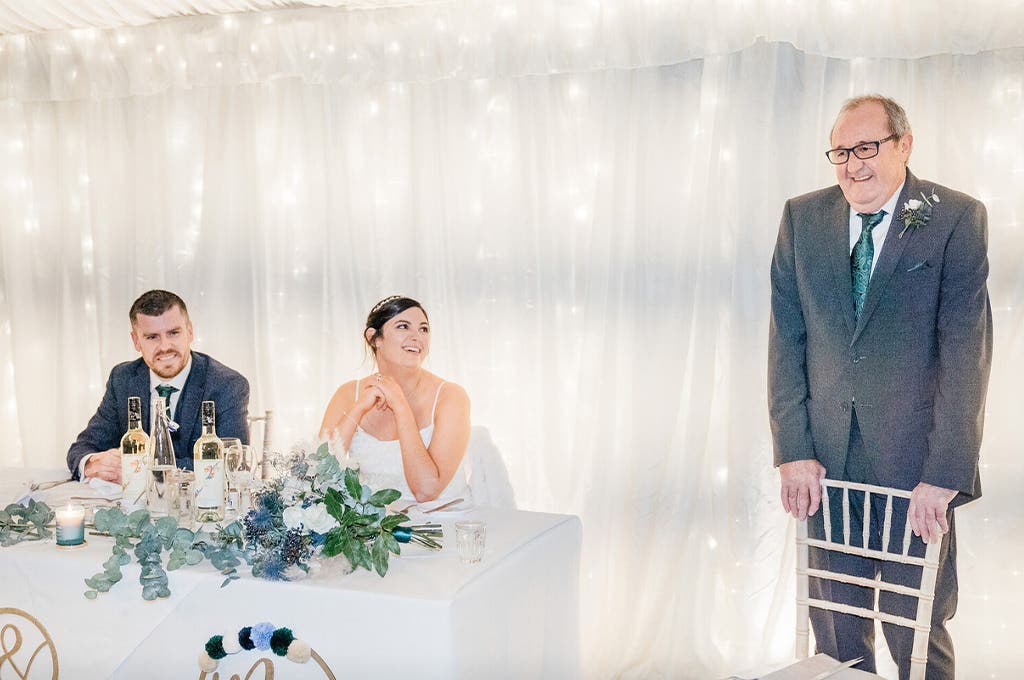 If you would like us to feature your big day, like this lovely day with its wintery wedding theme, then please click here to share your story and photos with us and we’ll be in touch. Your nearest WED2B is closer than you think, click here for more details about WED2B’s bridal shops Bristol