A gloriously sunny autumn day was the perfect backdrop for this happy couple’s small wedding. Our WED2B Real Weddings feature reveals more: Stephanie and Will first met in high school in 2003, although their paths rarely crossed. “I was quite...

Stephanie and Will first met in high school in 2003, although their paths rarely crossed. “I was quite focused at school and wanted to ensure I left with good grades,” says Stephanie. “Will was always in trouble and spent his entire time messing about! In 2016 we got talking again, through social media, and he invited me round for pizza and beer. Then the next day he took me out on his motorbike to Box Hill. We brought our first home in 2017, the same year we got engaged, and then in 2018 we were married. Time certainly flies when you're having fun. It's also true what they say, when you know, you know!” 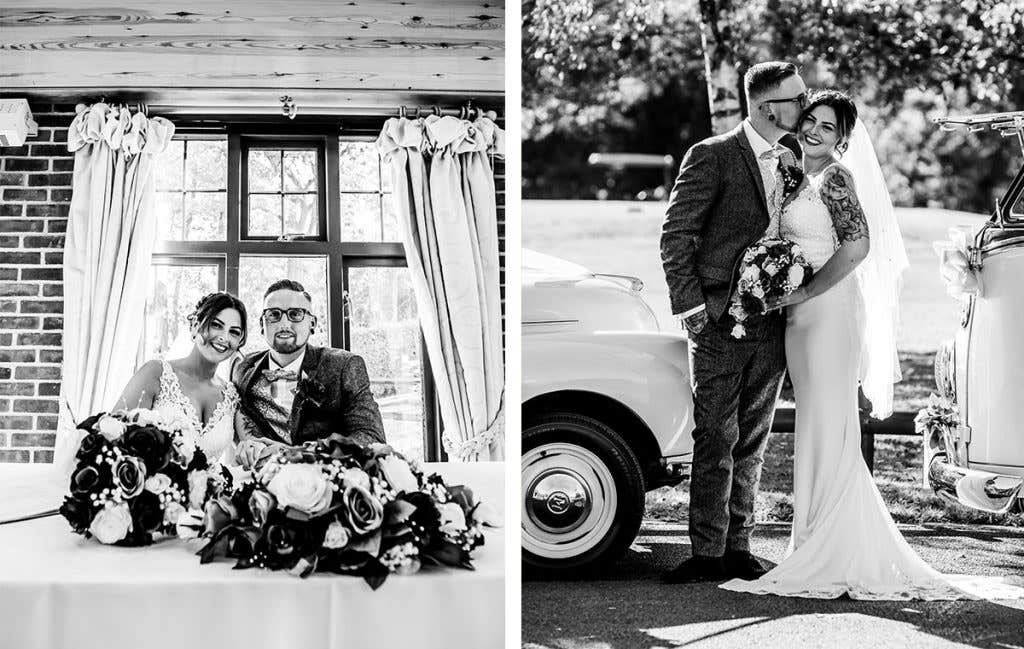 Will proposed on Box Hill, one of the couple’s favourite locations. “We rode there on a warm July evening and went up to the main viewing point,” says Stephanie. “Will said it was far too busy so we rode down to quieter part of the hill where the sun was starting to set over the view. He set up the camera on my phone, to get some photos of us by the bike, but little did I know it was on video! Then he got down on one knee and popped the question, while we were surrounding by the stunning views. I burst into tears and said, 'Yes', of course!” 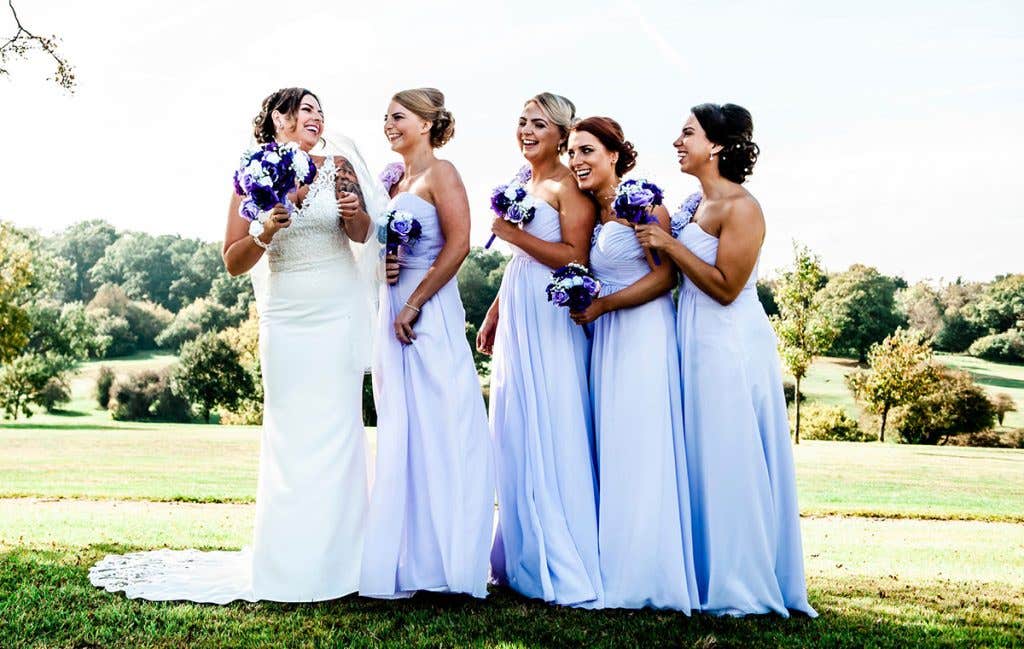 Stephanie, her Mum and her maid of honour visited WED2B’s Bromley store in December 2017. “The first WED2B dress I tried on was the one,” says Stephanie. “I'd picked four dresses off the rail and the first one I put on was Sawyer. It fitted beautifully and had a beaded bodice, low neckline, lace back and a lace train to die for! I was adamant I didn't want a veil but, after trying one on, I just couldn't resist, as it matched the dress perfectly. My Mum and my maid of honour welled up, so I just knew this was ‘The One’. I felt so comfortable and elegant it filled me confidence, I just didn't want to take it of!” 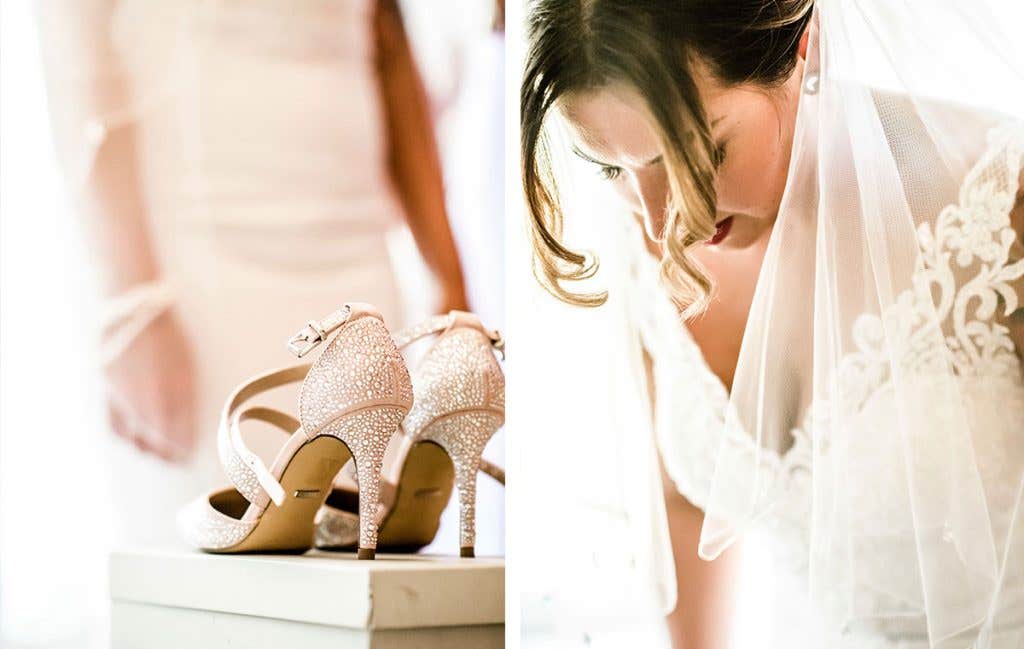 The couple married on 5th October 2018 at Surrey National Golf Club, which is also where Will works. “We’d looked at a few venues for our small wedding before thinking of Surrey National but after having a look around with the events staff I was blown away,” says Stephanie. “The rooms were amazing with breathtaking views.” 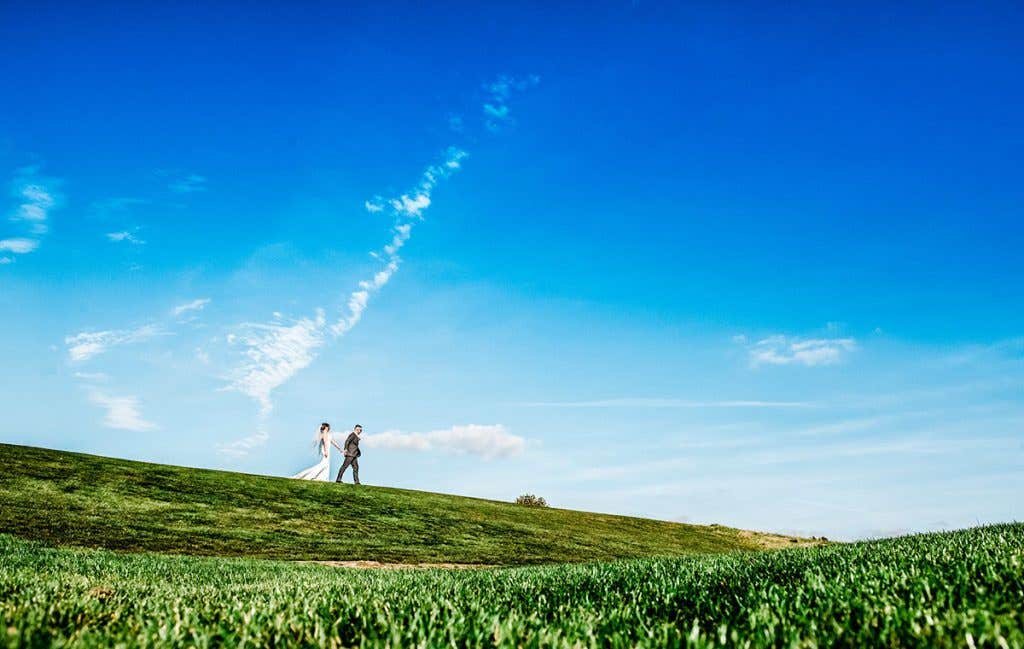 The ceremony was intimate with just family and the couple’s closest friends. “I walked down the aisle with my Dad to a piano version of Ellie Goulding’s ‘Love Me Like You Do’, a song that's always been special to us,” says Stephanie. “During the ceremony Will got my first name and middle name confused in the middle of our vows and we both burst out laughing, along with our guests! He was initially very embarrassed but really it put it us both at ease. It's something we look back on now and laugh about!” 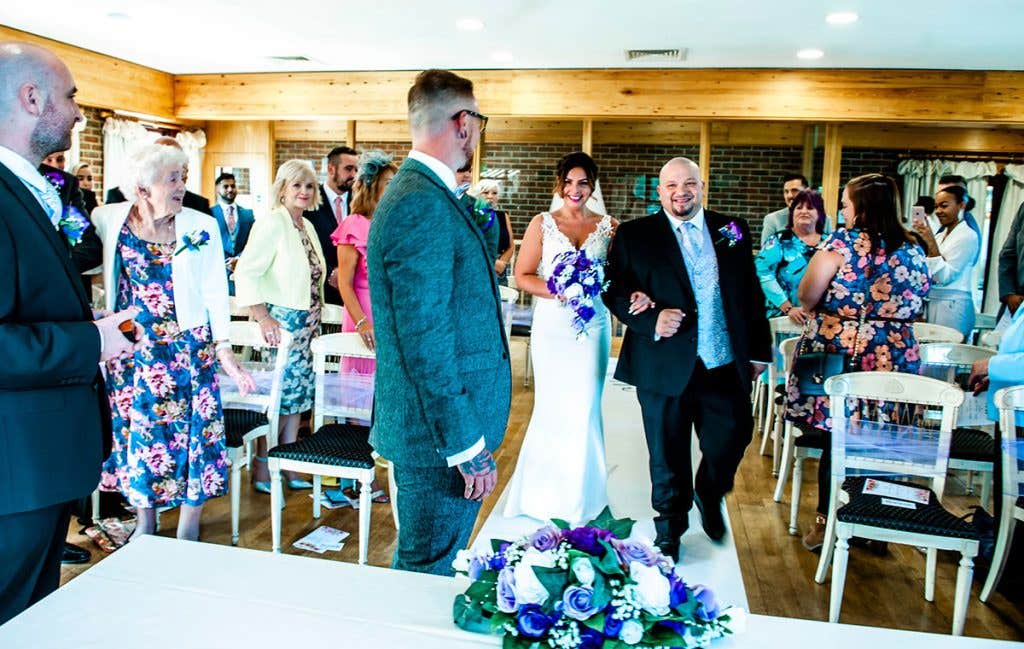 The ceremony was followed by a drinks reception on the balcony, where guests could enjoy the unseasonably warm weather. “It was sunny and 22°C degrees at the start of October, so we couldn't believe our luck!” says Stephanie. “Our guests watched as we had some photos taken by the lake. Then we had our speeches followed by our wedding breakfast. Afterwards we had a DJ and spent the evening dancing with all our guests.” 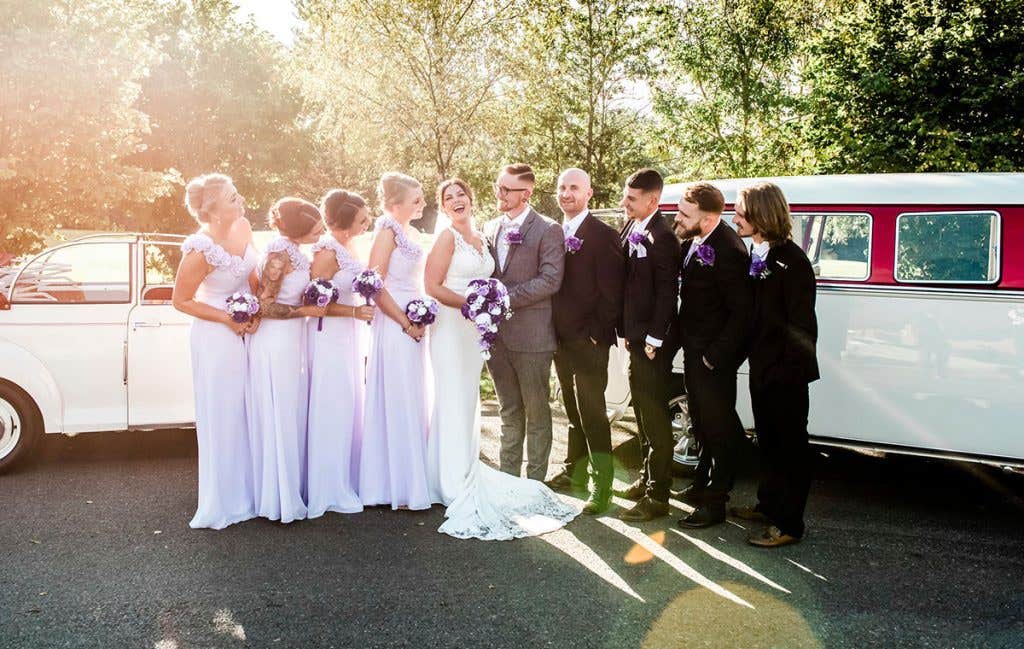 “Make sure you and your spouse work as a team, I really couldn't have done it without Will’s help,” says Stephanie. “And don't break the bank trying to please other people. Your day is all about you, so just enjoy it and take it all in. The moments you'll remember the most are not how pretty your tables looked. I wouldn't change a thing.” 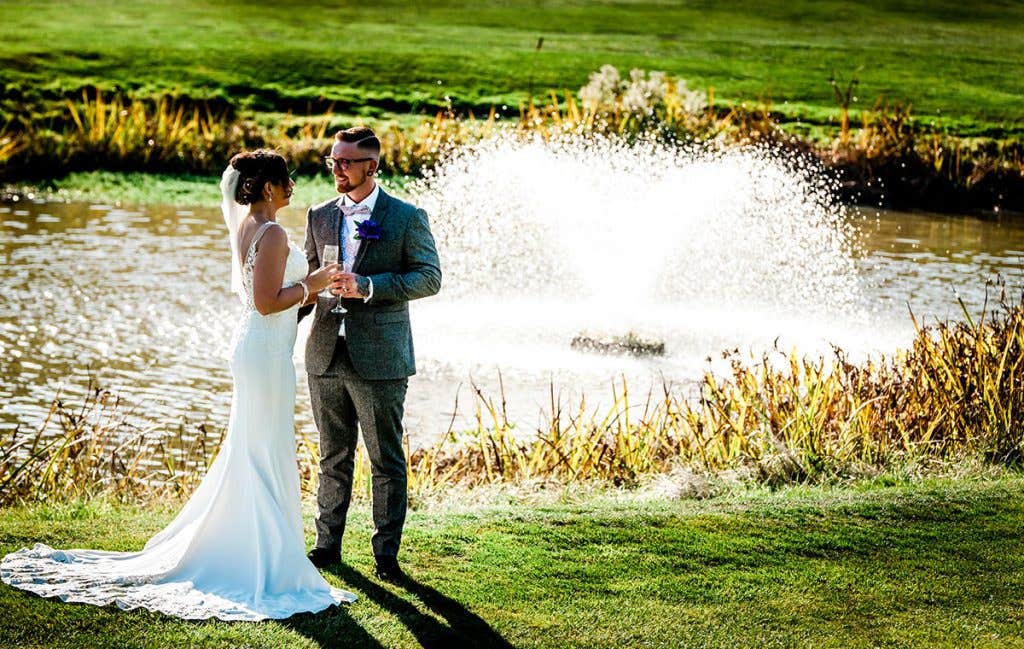 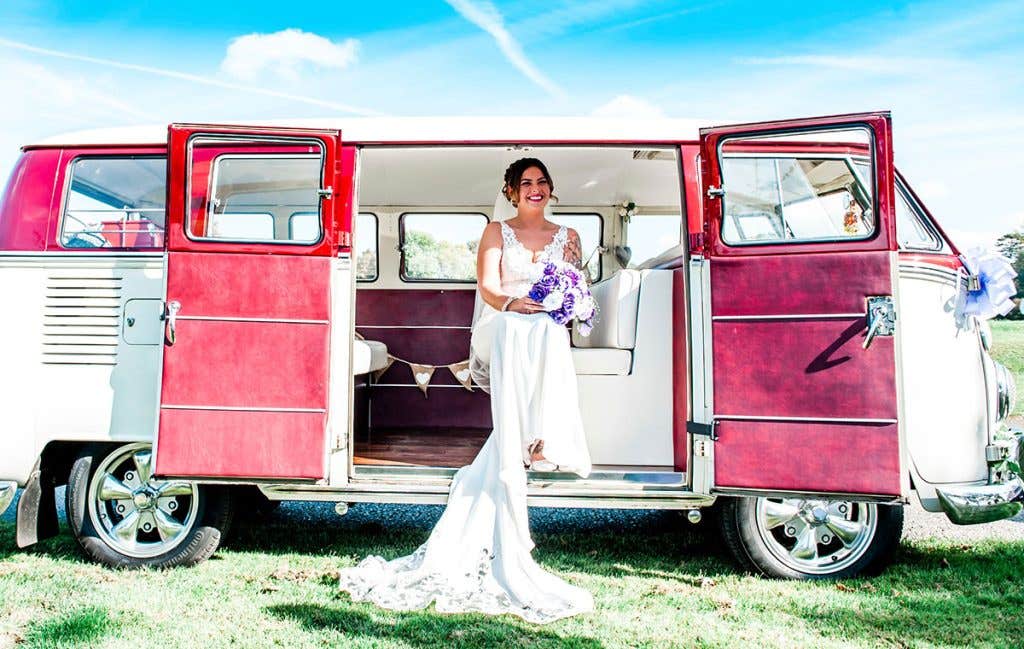 Did your wedding have the wow factor like Stephanie’s small wedding? If you would like to be a part of our real weddings feature send your favourite photo to info@wed2b.co.uk and we’ll be in touch!